Is there anything left to say about André The Giant? After countless anecdotes, graphic novels, documentaries, and a lackluster WWE book, some would be forgiven for thinking that well has run dry. They’d be wrong: new biography The Eighth Wonder of the World shines fresh light on the legend of the big man.

Written by Bertrand Hébert and Pat Laprade, field producer of the HBO doc, the book is exhaustively researched, serving not just as a chronicle of André’s life but also the territories he worked in. At a weighty 440 fact-filled pages, it’s almost as bear-sized as The Giant himself.

Born André René Roussimoff on May 19th, 1946 to Polish and Bulgarian immigrants, The Eighth Wonder’s first revelation is André wasn’t from Grenoble at all; he was delivered in a hospital in Coulommiers, near Ussy-sur-Marne. At six kilos, he was a big baby, and he grew to be taller than the rest of his classmates, but his acromegaly didn’t surface until later. Besides a little soccer and a failed attempt to take up cycling, André wasn’t particularly sporty, and fared little better in the classroom. The book finally reveals the truth to the rumor that Samuel Beckett used to drive him to school.

After a chance meeting, Robert Legeat offered to train an 18-year-old André in Paris. Roussimoff wasn’t a fan of pro wrestling, having never had the luxury of a television set, but it sounded better to him than the jobs he’d done so far. While being trained, André slept in a metro station and took whatever manual labor he could find.

André made his debut on January 25th, 1966 as Jean Ferré, named after a French folktale lumberjack. Defeating 5’9” Ted Lamar in his first match, André began working TV bouts the next month. His acting roles started earlier than you may think, too; in 1967 he made his film debut in Casse-Tête Chinois Pour Le Judoka (Chinese Puzzle for the Judoka). He’d lift the French Heavyweight Championship almost two years to the date of his debut, defeating Franz Van Buyten on January 20th, 1968.

While touring the UK (and suffering his first singles loss versus Kendo Nagasaki) he stayed with British legend Tony St. Clair, who recounts André’s unbelievable breakfast requests. On January 3rd, 1970, The Giant made his debut for IWE in Japan as Monster Roussimoff. He found instant success, winning the Tag Team Championship with Michael Nador fifteen days later. However, he wasn’t protected in singles matches on the tour, often dropping bouts to Strong Kobayashi.

It’s around this time that André may have first learned about his acromegaly. The book takes a deep dive into The Giant’s possible reasons for declining to have surgery to stop the spread of the condition. It’s a pivotal moment; health-wise, the rest of The Eighth Wonder is like watching a car crash in slow motion.

At the behest of Adnan Alkaissy (better known as General Adnan in the WWF), André toured Iraq but was lucky to escape with his life. Returning to Japan to work for the IWA he experienced better fortunes, felling foes with his own take on a Tombstone Piledriver.

On June 1st, 1971, André made his debut in North America, versus Cowboy Jones in Montreal. And just over a month later, he wrestled in the United States for the first time, for Verne Gagne’s AWA. While splitting his time between Canada, the US, and Japan, Dick The Bruiser took issue with the name Geant Ferré, feeling it sounded like ‘Giant Fairy’, and suggested a change; Roussimoff was now André The Giant.

In January, 1973, Vince McMahon Sr. came calling. McMahon used André in the WWWF and took tight control of his bookings elsewhere. It’s here that The Giant became a worldwide phenomenon, ending 1974 as the fifth-biggest draw (and highest earning grappler) in the world. In 1976 he was booked against pugilist Chuck Wepner as part of a boxer versus wrestler event also, infamously, involving Antonio Inoki and Muhammed Ali.

In 1977 André wrestled a battle royale including the Super Destroyer. Behind the Destroyer’s mask was a man that would help define both their careers, Hulk Hogan. They fought several times over the next three years, including in Japan for NJPW.

Back in the WWWF, in May 1981 Killer Khan kayfabe snapped André’s ankle, leading to a feud that even went as far as Canada. In truth, Roussimoff had suffered the break getting out of bed, but fortunately recovered swiftly. Another legendary feud took place in Japan versus Stan Hansen, which featured Hansen slamming The Giant. Mutual respect blossomed into a real-life friendship, leading to some corking bouts.

André could be less co-operative when he didn’t like you, as Dino Bravo, Kamala, and The Iron Sheik (not to mention, later, Randy Savage and The Ultimate Warrior) would find out. Even Hogan was intimidated, throwing up on the way to an arena when he found out he was wrestling Roussimoff (breaking the ice by plying The Giant with drink to gain rapport). Shortly after, The Hulkster would win his first WWF Championship, Vince McMahon Sr. would pass away, Vince McMahon Jr. would take over the company, and André’s most famous run would begin.

Following feuds in the WWF with John Studd and King Kong Bundy, and a detour to Japan for a worked shoot contest with Akira Maeda, André took on his most famous acting role in the movie The Princess Bride. He was a hit as Fezzik but, sadly, his health had atrophied to the point he couldn’t catch 115 pound actress Robin Wright. During this time, he got a call from McMahon pitching the biggest angle of his career and, possibly, the history of the sport.

Roussimoff’s legendary confrontation with Hulk Hogan on Piper’s Pit ignited a feud that began with their match at WrestleMania III, kayfabe selling out the Pontiac Silverdome to the tune of 93,173 in attendance. With André on the verge of back surgery, it was no mat classic, but few fans will forget seeing Hogan slam The Giant for the first time. There was enough fuel to the fire that they’d continue battling throughout the summer, with Roussimoff earning his only World Championship under suspicious circumstances before selling it to The Million Dollar Man, Ted DiBiase, setting up a tournament at WrestleMania IV where André would face Hogan again.

André’s star began to fade, Roussimoff confined to a feud with Jake Roberts, and jobbing in seconds to heir apparent The Ultimate Warrior. The Giant was also irked by being left out of SummerSlam ‘89 in favour of actor Tiny Lister. He’d rebound slightly, winning the Tag Team Championship with Haku, but the writing was on wall, and Roussimoff retired from competition in the WWF shortly after losing the titles to Demolition.

Now as a babyface, André would manage The Bushwhackers and The Rockers, while undergoing knee surgery in the hope of returning to the squared circle. And, in a lesser known part of his career, he’d step between the ropes between 1990 and 1992 in both Mexico and Japan, either teaming with or facing stars like Giant Baba, Mick Foley, Bam Bam Bigelow, and the future Yokozuna.

Roussimoff’s health was ailing, and he received a shock to the system when his father, Boris, passed away in January 1993. Just 13 days later, on January 28th, André was found dead in his hotel room.

Apart from his career, Hébert and Laprade detail the debate about The Giant’s height, his ability to hold inordinate amounts of liquor, his love life, him assaulting a cameraman, and his relationship (or lack of) with his daughter, Robin. This is no puff piece on Roussimoff, with the authors unafraid to take André to task where necessary. Not to say there aren’t lighter moments; his friendship with a young Stephanie McMahon, inexplicably cut from the HBO documentary, is heartwarming, his friendship with Tim White often hilarious, and his farting contests with Vince McMahon a mental picture you won’t soon forget.

Extensive and enlightening, The Eighth Wonder of the World is the best independent pro wrestling biography since Crazy Like A Fox. Add a raft of rare photos to the mix, and you end up with a towering testament to André The Giant that no fan of the man, the territories, or pro wrestling history should be without. 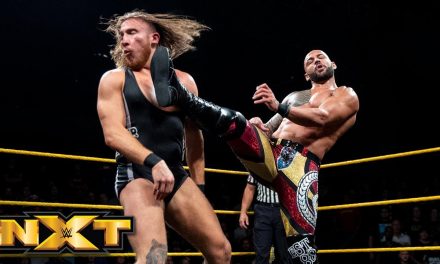