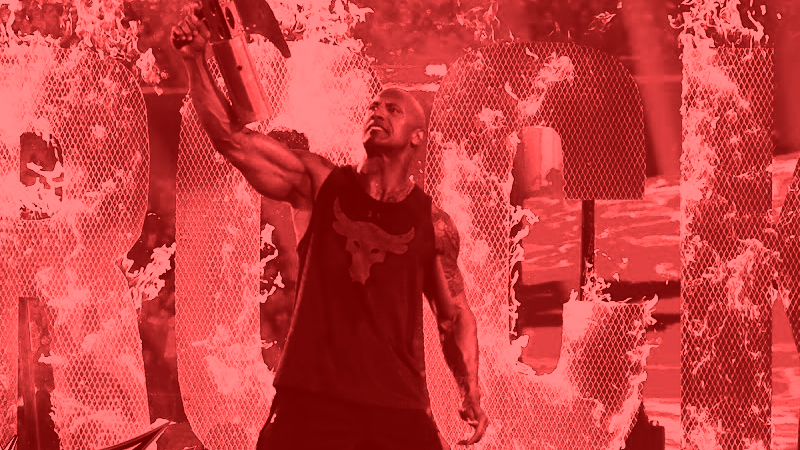 When this idea of “us talking about our favorite WrestleMania Weekend moments” took off, there were a lot of places I could have gone for my piece. Obviously, being the Dragon System nerd, talking about the March 30, 2006, Dragon Gate six-man tag that introduced the company to the western audience would have been the piece to write. Or I could have decided to talk about how the Joey Janela Spring Breaks fundamentally changed indie wrestling for the better and worse.

That seemed too simple, and when this series was presented to me, there was one thing that stuck out to me as something I genuinely loved. It was messy, preposterous, show-breaking, and such a remarkable moment that I’ve had countless people tell me “Spears, that was the moment I learned to emotionally distance myself from it” when I speak fondly about this. I watched WWF and WWE since the Attitude Era, and really stopped watching several years ago, but my favorite all-time moment is at WrestleMania 32 where The Rock brought the entire show to a standstill with his flamethrower and the Dallas Cowboys cheerleaders and pinned Erick Rowan in six seconds.

This moment fundamentally broke WWE in a lot of people’s minds. As we moved from the pay per view era into the full network era, they haven’t been constrained in either their show lengths and the amount of insane spectacle they are willing to employ. What was WWE before the launch and what it is now are two fundamentally different things. Folks can try to evaluate with minutiae like “oh the Attitude Era vs. Ruthless Aggression” or “Cena on top vs. Roman on top,” but to me, this is the delineation. This is when WWE was what it was before where things weren’t great, but had a semblance of when things mattered. When The Rock came out four or five hours into a tedious show in a case of either self-indulgence or manufacturing moments that don’t resonate in the viewer at all.

Stalling a show to break a fake record and to shoot a flamethrower to set your own name on fire is the most WWE thing. This is a company with an inability to leave things in the past. They constantly have to rehash their glory days because they now have nothing their audience celebrates other than the glory days. ROCK in flaming letters is the best example of this in my mind: If they did this with Seth Rollins, the fans would just sit there wondering why this is happening. Of course, The Rock did it, and because it was him, the fans that are willing to shell out insane amounts of money cared about it.

Going wink-wink nudge-nudge and feeling the need to pander to the area that you’re holding the show is a textbook WWE play. I grew up in Dallas-Fort Worth, and with the exception of the deranged Cowboys diehards, people don’t care if the Dallas Cowboy Cheerleaders are out for a big event. There was no sense of DFW pride or “hey they get us.” It was only an incredibly pessimistic ploy for response and that’s hilarious.

And then we come to the original intent of this segment: The Rock was supposed to announce the attendance to AT&T Stadium was 101,763, an all-record for WrestleMania. Through financial disclosures and reports from Dave Meltzer, we found out that this was a work, and that the real attendance was around 93,700.

They sent out one of their biggest stars in history, and the biggest blockbuster movie actor in the world, to lie about how many people were at the show. That real number? It would have broken their attendance record without any doctoring of the numbers. Vince McMahon and the WWE built this segment on a funny lie and something that ultimately doesn’t matter at all.

Finally, we need to talk about the match. Not only did The Rock come out to set his own name on fire, run to the ring with the Dallas Cowboy Cheerleaders cheering him on, or to lie about attendance, he came to set a new record. The record of the fastest match in WrestleMania history. Something that only the most committed WWE diehard would care about or would be an answer for a trivia contest. How did WWE accomplish this? Oh, they fed someone who they were trying to make worth something. Now I have no illusions to who Erick Rowan is to this company, but he was attached to Bray Wyatt, one of the few newer superstars that had any sort of crowd connection. Well, they gotta look like total geeks by a guy that’s wrestled a grand total of six matches since 2004. Whatever Rowan could be, feeding him to The Rock certainly lowered his profile to the audience. Bray Wyatt was hurt being even a part of the segment.

I find it somewhat hard to discuss the attempts made by the company in order to create new stars. When I talk about it amongst friends, it often goes to jokes that “The WWE Superstar Machine is Broken” or “why can’t they make superstars” that cribs on the fact that we are in this bizarre era where nothing matters. Bray Wyatt, for moments or whatever glimpses of promise, was a part of this. He wasn’t knocking them dead and was years away in either direction in mattering as a star (I argue that he’s never mattered in either of his iterations, regardless of what social media buzz says), but it undoubtedly tarnished him to be treated like the leader of the geek squad.

Three people brought through the WWE developmental system of the 2010s completely made worthless by arguably WWE’s biggest star of all time in a segment that only existed to spread lies and have spectacle for the sake of spectacle or rationalizing the lie being told.

The cherry of this insane segment is the fact that John Cena, the last WWE created star that meant anything, came and helped out The Rock in clearing out the ring after the six-second match.

I mean he had to, right? If we are already going to waste fifteen minutes in a show like this, you might as well just go full into the absurd.

We live in uncertain times and a very uncertain time within the wrestling industry. Trying to put a date on when “things will be normal again” seems more like a foolish delusion by the day. So when I’m trying to think back on moments and matches, I’m not going to look for the best matches I saw live or overall shows.

I’m going to think of the dumbest thing that a multi-billion (as of this writing) company did that not only wasted everyone’s time, but it taught fans to stop caring about the corporation. For all the irony and meme wrestling that’s been out there over the past few years, the single funniest thing that’s happened during a WrestleMania weekend was when they had The Rock light his name on fire with a flamethrower, run down the ring being cheered on by the Dallas Cowboy Cheerleaders before lying to the world about a fake attendance number and then having a “record-breaking” match with an act that the company was trying to make into something.

Just typing that makes me laugh. 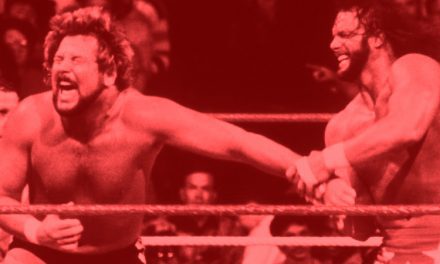 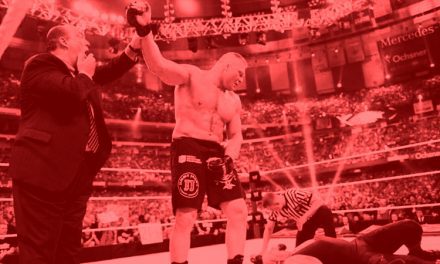