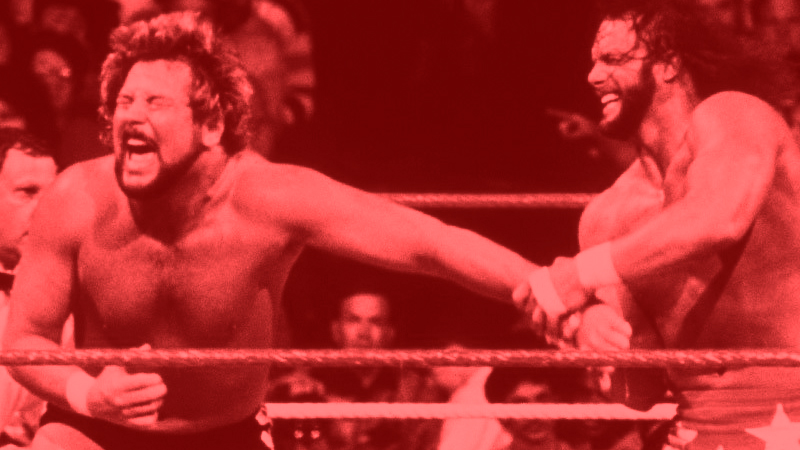 That isn’t designed to be some sort of ‘cut me and I bleed kayfabe’-style boast, more just that I never remember a time when wrestling wasn’t part of the fabric of my childhood. In an odd way, it also means that I don’t remember a specific point or moment where I transitioned from a naïve, unknowing child to a full blown believer. Some fans talk about flicking through the channels and catching part of a wrestling show and becoming hooked; others, a visit to a family member or friend in a different state or with a different television setup who showed them the light. For me, wrestling was just there: wrestling figures, a toy ring and VHS tapes. I assume at some point I asked for them as gifts or presents, but if so, it was before I was truly cognisant of it.

Being born and living in the United Kingdom in the 80s and up through the 90s meant that your access to wrestling was limited. If you could afford that astronomical (or so they felt) prices of Sky, you could watch WWF, whilst WCW had brief flirtations in the early 90s with ITV – a terrestrial television channel (available to all homes with an aerial) that wasn’t exactly well known for the quality of its programming. The other option were VHS tapes, bought or rented from the local Blockbuster.

As a wrestling fan in single digits in terms of age, I was limited to the few VHS tapes that were bought for me by my Dad, alongside the occasional rental if the situation arose. Those events became the foundation upon which my eventual legitimate passion for wrestling spiraled out of. At a time when I was at me least discerning in terms of concepts such as ‘workrate’ and all the other crosses modern wrestling matches have to bear, I was handed a bunch of tapes that I watched and enjoyed time and time again.

If this wasn’t WrestleMania season, I could spend time talking about the 1992 Year in Review VHS tape we owned. Whilst it showcased legitimate quality in terms of the Randy Savage and Ric Flair feud, as well as Savage versus the Ultimate Warrior at WrestleMania, it was moments such as Nailz’ booming voice warning the Big Boss Man that he was coming after him that lived long in my memory. It is hard for a six-year-old child to forget when the Berzerker decided to ignore the fundamental rules of wrestling and tried to impale the Undertaker in the center of the ring.

WrestleMania VI was another foundational stone, though a boring one in hindsight. Though it was by no means perfect, WrestleMania VI is a perfectly acceptable WrestleMania even with the benefit of nearly thirty more years of action having passed. With Demolition toppling the Colossal Connection, Andre’s face turn and the Unstoppable Force versus the Immovable Object nature of Hulk Hogan versus The Ultimate Warrior, it had some legitimately great moments. It also had Roddy Piper wearing half blackface; a confusing concept for an adult, let alone a child.

However, the show I watched the most, so arguably enjoyed the most using pretty basic inference skills, was WrestleMania IV.

The allure of this show can be hard to fathom. There was very little in the way of ‘good’ in-ring action, the booking of the tournament wasn’t the greatest and it went for almost four hours which felt like a slog.

Looking back at the show as a whole, what makes it interesting to me is that my wrestling fandom at that time only extended to the VHS tapes I had and the wrestling figures I bashed about. WrestleMania IV was the culmination of a year’s worth of animosity between Hulk Hogan and Andre the Giant following their clash at WrestleMania III. I had no idea about that show. Nor did I know anything about evil referees getting cosmetic surgery to look like another official, the Million Dollar Man Ted DiBiase, the vacating of a belt. Nothing. I just watched with next to no knowledge. Or judgment, for that matter. All I knew was that this came in a box with two VHS tapes, so much be awesome. 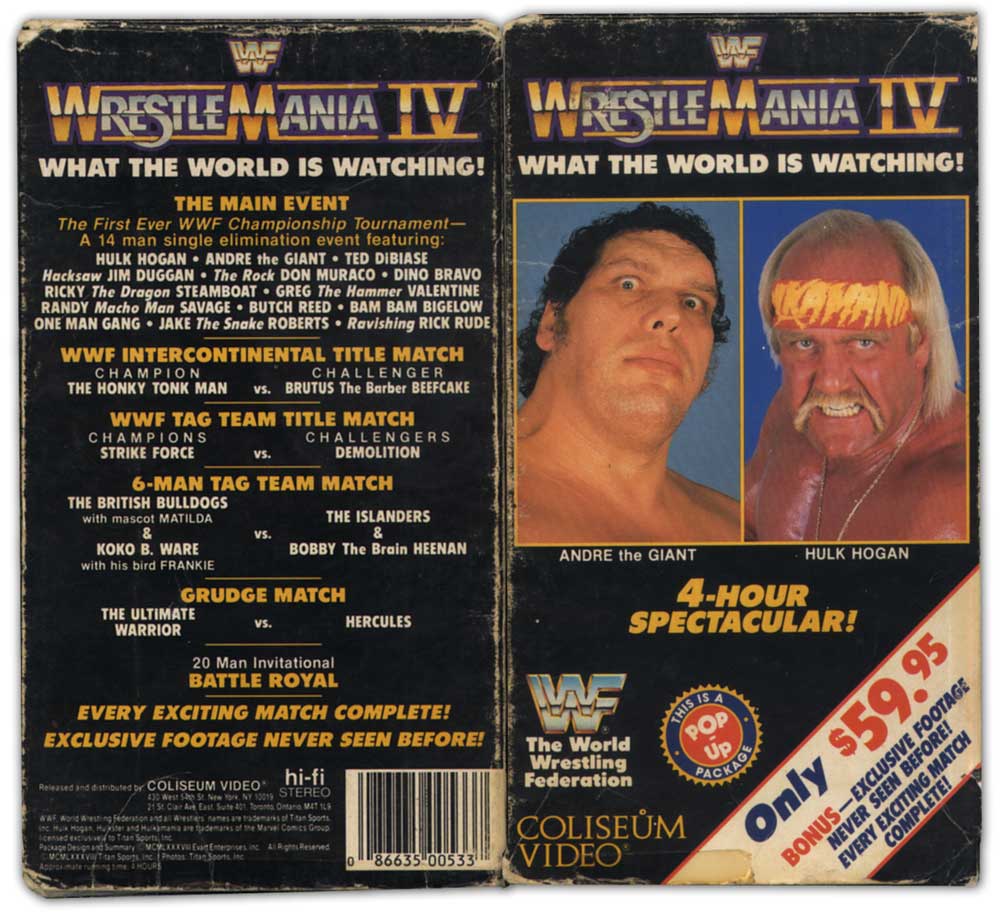 Nostalgia is a wonderful thing when it comes to our capacity to overlook the flaws of the media we consume when we were young. I’m not in denial about the quality of the show, but I know that if I stuck it on this very afternoon to watch once again, I’d be able to enjoy it much more than anyone who attempted a WrestleMania Rewatch or a fan who was more in tune with modern bells and whistles than old school wrestling, for example. The benefit of my history with the show only helps, never hinders.

For a show where there aren’t as many ‘moments’ that get wheeled out whenever people talk about WrestleMania highlights – the one exception being Macho Man celebrating his title win with Elizabeth and Hulk Hogan – it is funny to me what feels indelibly etched on my brain when it comes to the spots and moves that I recall without having to think too hard. Some remain there for their impact; others, for their incongruous nature.

To name but several: Bret Hart destroying Bad News Brown’s battle royal trophy after Brown double-crossed him to win it in the first place; the tie-dye t-shirt worn by Billy Graham as he accompanied Don Muraco to ringside; The Ultimate Warrior swinging Hercules’ chain around his head; Andre the Giant choking Hogan as the first VHS ended and the second one started; Dibiase pinning Muraco following a stiff-looking hotshot; Peggy Sue; Matilda ‘attacking’ Bobby Heenan whilst he was dressed in an attack dog outfit; Savage rolling away as One Man Gang tried to nail him with Slick’s cane; Ax absolutely drilling Rick Martel with Mr. Fuji’s cane whilst the Canadian had Smash in the Boston crab; the chairshot that broke the Million Dollar Dream and almost gifted the WWF World Heavyweight Title to Randy Savage.

Somewhat ironically, the moment that stuck with me the most wasn’t even from the PPV itself. In hyping up the Hulk Hogan versus Andre the Giant match in the second round, a clip was shown of Andre attacking Hogan on the January Saturday Night’s Main Event. Attacking him from behind, the Giant headbutted and choked the (at the time) reigning champion. As a youngster, watching this behemoth enter the ring and destroy the one wrestler who I probably had some legitimate knowledge about was an awe-inspiring sight. I can still hear (and sometimes, feel) those headbutts to this day.

It would be remiss if I didn’t talk about the bits that clearly didn’t work, yet my brain has almost hidden them away from my recollection. I know they exist, but the specifics become harder and harder to quantify. The ending to One Man Gang versus Bam Bam Bigelow was bad and the Rick Rude versus Jake Roberts match was incredibly boring even for an easily pleased child, though it is as if they are opinions rather than memories. Ask me anything about the matches themselves and outside of a prolonged rest hold in the latter, I can barely tell you anything about them no matter how many times I must have watched them.

Quibbling about the involvement of Hogan in the last match aside, this was also the show that – through the eyes of a 6-year-old or a 33-year-old – showcased what Randy Savage was all about. From the glitz and the glamour of the costume changes and the beautiful Miss Elizabeth, to the scrappy attitude and unique offense, you couldn’t take your eyes off of him when he was on the screen.

Citing WrestleMania IV as a fundamental part of why I became a wrestling fan feels odd in some ways, yet it sits as a time capsule of what many (mainly British) fans experienced as wrestling. The bright lights, the gaudy colors, the larger than life characters – this was professional wrestling. I didn’t know that there were other promotions that were offering something more realistic, bloodier, grittier. All that mattered to me was seeing the good guy overcome seemingly insurmountable odds to defeat the bad guy. At the most basic level, WrestleMania IV’s overarching narrative is four hours of that. For some, that might have been a slog, but for a young Liam, that was magical.