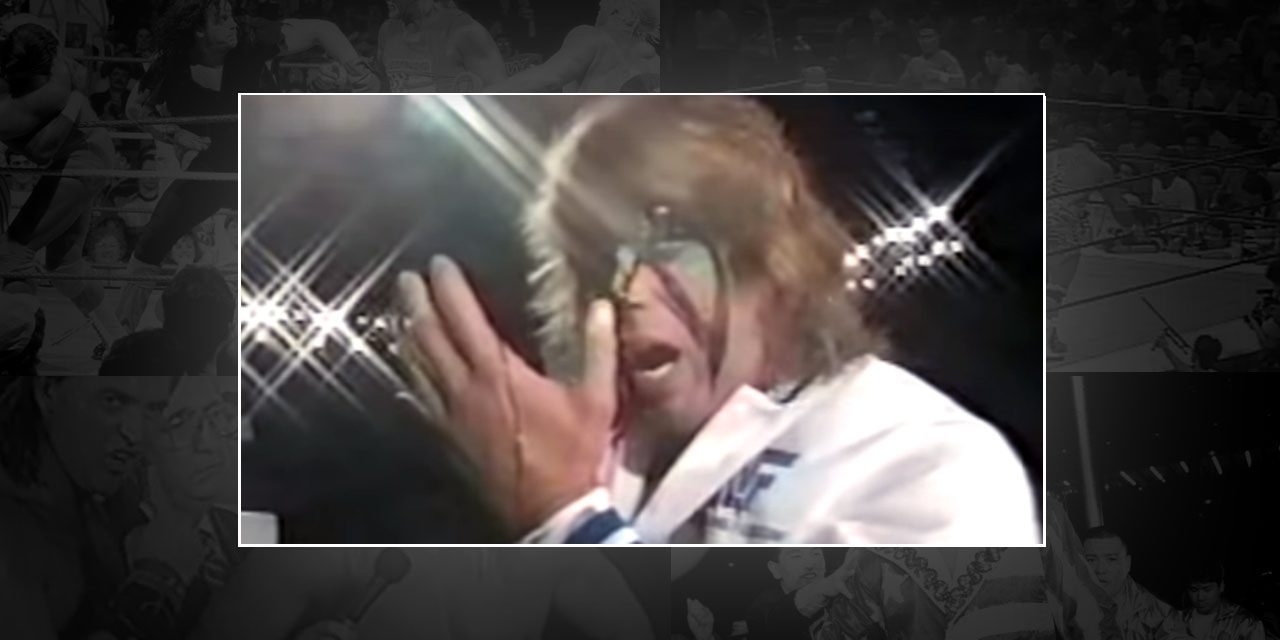 The collection of matches and segments I am watching for this series come from a 1992 Yearbook created by Goodhelmet, a longtime poster at the Death Valley Driver Forum and other wrestling places. A cross-section of the best (and worst of wrestling within a certain year), it is a great snapshot of everything of importance. The footage is taken from 22nd-23rd May.

With a two week delay in the rear window (the perils of mock marking as a teacher) and with the rest of the world falling apart, we are back to hopefully gain some solace in action from 1992, a year in which I was still too young to really understand how bad the world could be.

Is there a better way to brush off the cobwebs than an All Japan Six-Man Tag as Mitsuharu Misawa, Toshiaki Kawada and Kenta Kobashi took on Jumbo Tsuruta, Akira Taue and Masa Fuchi. The action begun in progress and Fuchi was immediately deposited to ringside with a Kobashi bulldog off of the apron to set the tone for this viewing at least. Fuchi was soon being a grade A dickhead though as he held a hand of Misawa’s hair in order to halt a crossbody attempt and allow Tsuruta to slow down the onslaught of the relative youngsters. Taue had clearly learned a step or two from his partners as he soon dumped Misawa hard on the concrete with a variant of the Nodowa Otoshi.

This prompted an aggressive beatdown on Misawa as the opposing trio bend every rule in order to keep him isolated. This all built to a strong hot tag to Kawada as he took out his team’s frustrations on Taue in particular. The best part about this stretch was how the ‘face’ trio was happy to bend the rules as well, gaining some measure of revenge and leaving the crowd in raptures. Taue as a fired up youngster is great, choosing to continue attacking Kobashi even after he had tagged out to Kawada.

The third ‘segment’ as such begun with Tsuruta dumping Kawada with a piledriver on the concrete. Just as things were threatening to descend into a similar beatdown as to the one Misawa suffered, Kawada fought back, beginning a sequence where control of the contest became significantly more fluid in nature and by the end five minutes, increasingly frenetic. Several nearfalls gave way to Taue trying desperately to end Kawada with Nodowa Otoshis and a powerbomb, only for Kawada to slap on a stretch plum in the center of the ring. Fuchi managed to save his partner that time, whilst Taue kicked out of a powerbomb himself. The finish was great as Kawada went back to the stretch plum, just as his partners kept Tsuruta and Fuchi isolated with submissions of their own. An excellent, high octane match well worth checking out.

A new SMW Heavyweight Champion was crowned and you could tell that this was a) a southern promotion, and b) run somewhat like a territory by the booking of the tournament. Brian Lee and Paul Orndorff were scheduled to meet in the finals, but Lee had been busted open earlier. With Bob Armstrong due to award the belt to Orndorff, Lee came out with bandaged head and vowed that he had come too far not to wrestle. What followed (in clipped form) was a match in which the referee getting too close not only telegraphed the ref bump, but ended up with Armstrong refereeing. A weapon that Dirty White Boy had passed to Orndorff was noticed by Armstrong and in the midst of a three way battle over the weapon, Lee was awarded the match – and don’t forget, the title – by disqualification.

This reeked of territories booking where the focus was more on the shenanigans occurring in and around the match as well as keeping Orndorff strong. Rather than launch Lee into the stratosphere with a strong win, the finish was just incredibly weak. Sure, you get a wild brawl with Armstrong himself even getting involved, but it really did little in favour of your first champion, Brian Lee. Admittedly, Lee wasn’t necessarily the guy you could build a promotion around, which was somewhat highlighted by a post-match promo. Would should have been cool – covered in blood, overcoming the heel – still felt awkward due to Lee’s poor delivery.

A WWF update with Mean Gene shows us a repeat of the altercation between the Ultimate Warrior and Papa Shango. Whilst this was all old footage, we get a warning before being shown the backstage stuff where Warrior ‘puked’ all over the EMTs who were working on him. A clip later on in the show had Warrior interviewed by Gene out in front of the fans. This was the infamous one in which Warrior starts to drip black goop from in and around his hairline. This all just feels so cartoonish now, especially when you look around at some of the other promotions and what they are offering (Dangerous Alliance versus WCW, Eddie Gilbert in USWA, etc).

In between the two Warrior segments, Mr Perfect, Ric Flair and an unnamed woman are enjoying a picnic. This was all about continuing to build upon the Savage/Flair animosity, with now there being talk about Elizabeth leaving a message on Flair’s answering machine. Whilst this was all good and fun, it does feel like this whole storyline has gone on longer than it needed to. With Flair still chasing the gold, they couldn’t exactly drop it, but it seemed as if the climax with regards to Liz’s role had been already.

Heading to one of those aforementioned promotions were interesting (and realistic) things were happening, Eddie Gilbert was in Memphis with the Global Title in his hands. This was all about building to a match against Jeff Jarrett and Gilbert does a wonderful job of evoking the familial history of both men. This wasn’t just about a title, but a family matter. Referencing his 13 years of experience to Jarrett’s six, Gilbert was sure he would come out on top. This was a great promo.

Tom Prichard and Brian Christopher had had a long-running feud at this point – mostly covered in this column – but this next encounter was with Christopher’s title versus Prichard’s involvement in USWA on the line. The clips started with the obligatory ref bump, before powder and a chain-assisted punch almost cost Christopher, considering he had introduced both weapons. Eddie Gilbert slunk down to ringside, getting involved by putting Christopher’s foot on the ropes to break up a pin, as well as tripping Prichard on a suplex and holding him down to assist Christopher in getting the three count. As Christopher looked to gloat on the mic, Billy Joe Travis stole the microphone, issued a challenge and battered him about the ring to close the segment. I like what I’ve seen of Travis, yet the reaction to his return was muted at best. Good to see Christopher/Prichard finally ending, probably to allow Prichard to focus on SMW.

Christopher was also involved in the next segment on the set as he fought Eric Embry in a non-title match. After a promo where Embry spent as much time complaining about Guy Coffey the matchmaker as he did the Moondogs, Embry had some early success with Christopher and was soon dropping the straps and blasting the champion with punches. This was mostly a slugfest until the Moondogs came down and waffled Embry with a board. Jeff Jarrett, Jerry Lawler and a random tag team I’ve never heard of called The Power Twins head down for a brief brawl. The post-match was all about promoting the Jonesboro show later in the week, though we again see a Memphis show that has to plug some of its local concerns, charities and events, which feels odd after a wild brawl.

(footage includes a Brian Christopher promo not on the set)

The last stop of this week is with WCW for Saturday Night and we get out first proper introduction to Diamond Dallas Page as he joined Jim Ross for an interview. DDP has a lot of charisma as he talked about ‘Down With DDP’, a new talk segment he seemed to be promoting…or was due to be on, as he then invited Paul E. Dangerously on for an interview. The two men clashed as Dangerously looked to be introducing a video that showcased the Dangerous Alliance in a positive light, yet actually revealed Dangerously paying one of the women who claimed she’d had an affair with Ricky Steamboat. As Dangerously warned DDP for messing him around, Steamboat came down through the crowd and ended up jumping Dangerously, launching himself over the Dangerous Alliance members. Other faces came down and a wild brawl began (typically not easily accessible via streaming) as things with the Dangerous Alliance and WCW clearly was not yet settled.

Before the main event for this week, Eric Bischoff turned up at Fabulous Freebirds Enterprises in order to meet with Michael Hayes and Jimmy Garvin. After almost getting kicked out of the building by security and meeting a less than enthused Precious, Bischoff found Hayes and Garvin making prank phonecalls before Hayes tried to sign a contract with a pencil. This was designed to be the Freebirds celebrating winning the US Tag Team Titles, but they just look like idiots for the most part.

The main event of the show was a continuation of the Dangerous Alliance/WCW feud as Bobby Eaton, Arn Anderson and Larry Zbyszko met Ricky Steamboat, Nikita Koloff and Dustin Rhodes in a two out of three falls contest. Whilst things can’t truly be compared, the pace of this match was much slower than that offered up by the All Japan Six-Man Tag. Things do briefly pick up the moment Rhodes dropped Anderson with a great right hand, though the Alliance was soon at ringside to regroup.

The narrative going into the match was that Zbyszko had been distanced from the Alliance off the back of his involvement in the loss at Wrestle War and even within this small conference Dangerously berated him openly for taking his mind off of the match. He had a point as a blind tag to Steamboat saw the Dragon grab the first pinfall with a top rope crossbody on Zbyszko in a great little bit of storytelling. This was furthered by Dangerously getting caught talking with Anderson about a vote to keep Larry on the team in some additional fun footage.

A triple figure four for the face team and a bouncing Bobby Eaton off of several Rhodes elbows against the ropes were the highlight of a second fall that ended when Rhodes intercepted Dangerously’s phone and was disqualified for wiping out Anderson with it. What appeared an anticlimactic finish was revealed to be another screw up by Larry Z as he overthrew the phone when attempting to pass it to Eaton.

The third fall had the Alliance target an odd area – Steamboat’s injured nose – but unsurprisingly it was Zbyszko who cost his team once more. After punching Anderson by mistake, Zbyszko ducked a Koloff sickle that put Anderson down for the count. The action was all strong enough, but it was the story that was told that made this some great television, especially as it ended with AA and LZ face to face and almost coming to blows.

Two strong six man tags bookended some decent wrestling action. Very much from the sublime to the ridiculous when you look at stuff such as All Japan and Eddie Gilbert in Memphis compared to Papa Shango and Fabulous Freebirds Enterprise. Check back next week as I continue down the path of 1992 in That Was The Year That Was.