This week on Wrestling Omakase we cope with unsettling world events the only way this podcast knows how: by talking about some damn good Japanese professional wrestling. John is joined by returning guest Thomas Fischbeck as the two of them open things up talking about the ongoing Coronavirus outbreak, both in the US and Japan, and how it’s affecting wrestling in both countries. They discuss some reason for cautious optimism that shuttered Japanese wrestling companies might slowly come back online soon, just as it looks like the US and other Western countries are getting ready to bunker down.

Once the chat of world events is over they turn their attention to two Korakuen Hall events from promotions that never stopped running in the first place: Big Japan Pro Wrestling and ZERO1. The shows took place on 3/3 and 3/1 but didn’t make tape until 3/10 and 3/12 respectively, so John and Thomas give their thoughts on these two shows full of hard-hitting action just a few days after they aired. First it’s BJW filled with the first matches of the Strong Climb tournament as well as a huge tag team title match main event. We also take a brief look ahead at the upcoming BJW 3/16 show in Yokohama that’s also still scheduled to take place as we record this. Then we move over to the land of ZERO1 and talk about a really great six-match show featuring old men whipping ass, big beefy battles, heel general managers (??) and much more. It’s a trip through two promotions that are helping us keep a little bit of our sanity, this week!

This week’s show was brought to you by Roman. Go to GetRoman.com/VOW to set up your free online doctor’s visit and get two-day shipping! 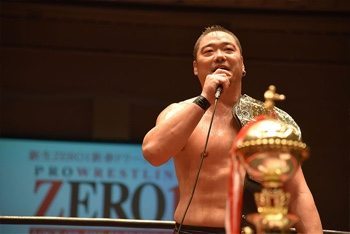