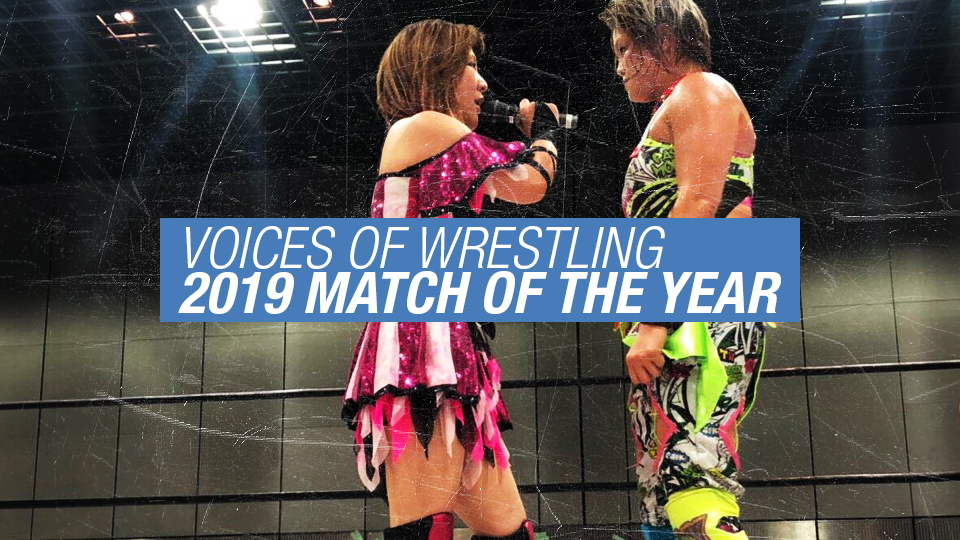 Now, I know that may come as a shock to some of you but it’s true, and in the world of professional wrestling in 2019 it was true in a big way.

Jokes about tired Twitter “controversies” aside, 2019 was a monumental year for women’s wrestling. In the United States, this was exemplified by female wrestlers main eventing the largest annual pro wrestling event in the world as Becky Lynch, Charlotte Flair and Ronda Rousey earned top billing for WrestleMania 35.

Outside the shadow of Titan Towers new opportunities for women in the USA also grew as All Elite Wrestling provided another choice for major league female wrestlers to get national TV exposure. The US independent scene also began to feature female wrestlers more both in the traditional sense and in the rise of intergender matches, culminating in the crowing of Tessa Blanchard as Impact World Champion.

In Japan, Joshi wrestling continued its steady climb, and especially began to gain more popularity in certain bubbles of English-speaking fans with the well-received Stardom event on WrestleMania weekend, Joshi wrestlers on AEW and even the easily available Gatoh Move Youtube channel with English commentary. This fall Joshi made news both in the ring with a fantastic Sumo Hall match being featured on DDT’s Ultimate Party (Shoko Nakajima vs. Yuka Sakazaki 11/3 #67) and out of the ring with the purchase of Stardom by Bushiroad, the parent company of NJPW. With the new support behind Stardom—including a dark match on the Tokyo Dome Wrestle Kingdom event—and the growth in America with AEW coupled with a Tokyo Joshi Pro Wrestling show being featured on WrestleMania weekend, the sky is the limit for Joshi in 2020.

But first, let’s continue to look back at 2019. Now, I will admit I do not consider myself a women’s wrestling or joshi expert of any regard. My analysis here (much like in my previous column Creating Separation: A Tiered Breakdown of the 2019 VOW MOTY Poll) will solely come from the placement of women’s matches in the 2019 VOW MOTY poll and looking for interesting trends and statements that can be inferred from that.

I started this column praising the achievements of women’s wrestling in 2019, and while it was a great year, it was not all roses in the world of female wrestling. I first have to start with the WWE. In the eventually documentary that the WWE produces for its network on the “Women’s Revolution/Evolution”, the Lynch/Rousey/Flair WrestleMania 35 main event will probably be touted as the pinnacle of the movement. And while I take nothing away from those three women and their incredible achievement, it can’t be denied that critically the build to the match, the match itself, and the follow up were are all severely disappointing. In fact, the triple threat main event match received a grand total of 0 votes and 0 points in the VOW MOTY poll.

The poor critical showing of that match is not an outlier either, as in general WWE branded women’s wrestling (including NXT) did not fare well in this poll. The immensely talented women’s division who put on great matches such as Becky Lynch vs. Charlotte at Evolution 2018 (#12 in last year’s VOW poll, making it the highest-ranked main roster match and 3rd best WWE match counting NXT), were once considered to be the saving grace of WWE main roster. Now, their poor booking, storylines, and less than stellar matches have only contributed to the continued decline of WWE. Both Charlotte Flair and Roundy Rousey, even as major parts of the WM main event had a grand combined total of 0 votes and 0 points in this year’s VOW MOTY poll. That stat gets even more depressing when throwing in another one of the WWE’s “4 Horsewomen.” Bayley, who was #7 with Sasha Banks for their Takeover: Brooklyn match in the 2015 VOW MOTY poll, has fallen greatly from that position of critical prominence and on the 2019 version of the list received a total of one vote for 10th place. Her participation in the Elimination Chamber match to crown the first WWE Women’s Tag Team Champion along with Sasha Banks placed in the “sadness village” tie for last place (#260) with 1 point. And much like the big title win of Becky Lynch, the follow up to this tag team title victory was disappointing, to say the least.

On the bright side, I guess you could say that they are pretty much treated equally to the men in WWE now.

Women’s Match of the Year

Putting WWE women’s wrestling into the greater context of wrestling worldwide shows that critically it is Japanese wrestling companies and talent that dominate the conversation. The top 15 rated women’s matches of the poll (not including intergender, I will get to that later) include a grand total of two matches from WWE. Both are NXT matches with the Women’s War Games match at #7 (#60 overall) and the Io Shirai vs. Candice LaRae match from NXT: Takeover: Toronto at #15 (#103 overall).  It isn’t until the 16th highest rated women’s match that a WWE main roster match shows up, with the Sasha Banks vs. Becky Lynch from Hell in a Cell at #104.

To be positive for a second, the variety of Joshi wrestlers and companies involved in these Top 15 matches are impressive. According to the Macho Man Randy Savage, the cream always rises to the top, and in this case, even the smaller Joshi companies such as SEAdLINNG, Sendai Girls, and Marvelous were able to place matches in the top 100 overall in the poll.

Lastly, I have to shout out the lone Lucha match on the list. Big Mami vs. Lady Maravilla from AAA Guerra de Titanes came in at #76 overall and as the 10th best women’s match on the list, really showing the strength of their in-ring work, storytelling, and the great love triangle angle with Niño Hamburguesa.

Non-Joshi Women’s Match of the Year

Pro wrestling has become such a worldwide and interconnected industry, that it makes it hard to do lists like “Non-Joshi Women’s Match of the Year”, or similar things such as the “European Match of the Year.”

Do I discount matches that include Japanese women, even if it occurred in a company outside of Japan? For example, would the Joshi six women tag from AEW’s Double or Nothing (which did not place in the poll) count as a “Non-Joshi” match? What about Stardom matches that occurred in the US during WrestleMania weekend? Eventually, I decided to create this list as more of a “Non-Joshi Promotion Match” list and would include any women’s match on the list that was not put on by a predominately Joshi promotion. Therefore it will still include matches like the Nyla Rose vs. Riho vs. Yuka Sakazaki three-way dance in AEW (#8 on this list, #162 overall), and the Asuka/Kairi Sane vs. Tegan Nox/Dakota Kai tag match from NXT on 10/30 (#11 here, #195 overall).

One of the purposes of this list was to continue my above analysis of how WWE women’s wrestling fared, and on this closer look – it’s still not great. After the Sasha/Becky match at Hell in a Cell mentioned previously (#104) it is the Kabuki Warriors tag match at #195 when the next WWE match appears. Between those, we have a strong showing from smaller promotions, such as Kylie Rae vs. Mercedes Martinez from RISE (#133), Sadik vs. Sadika Maiden from Zona 23 (#147), Ashley Vox vs. Kris Statlander from Limitless (#161), Leyla Hirsch vs. LuFisto from wXw (#177), and Charlie Morgan vs. Mercedes Martinez from SHIMMER (#195).

The two matches closing out the list as part of the tie for last place (#260) are the previously mentioned Elimination Chamber match and the Becky Lynch vs. Asuka match from Royal Rumble. Looking closely, it provides more evidence in the difficulties the Women’s Evolution/Revolution have faced in WWE main roster, as there are just 3 total matches on this list from there: Sasha/Becky at #104 and these two in last place.

Now, while I enjoy dunking on WWE as much as the next person, I do have to be fair and point that AEW has a bad showing on this list as well. They do not show up until the Nyla/Riho/Yuka three-way dance at #162 and after that only have a pair of TV matches with both Nyla Rose vs. Riho and Hikaru Shida vs Shanna at #219. Perhaps 2020 will be the year that AEW fulfills its promise of pushing women’s wrestling.

Intergender Match of the Year

In 2019 intergender wrestling was a big topic of conversation. Now, I’m not going to get into any debates on it, I’m just going to take a look at these nine intergender matches on the VOW MOTY poll and how they place into the larger wrestling landscape.

The biggest intergender story in US pro wrestling was the crowning of Tessa Blanchard as Impact World Champion. While her title win didn’t happen until January 2020, the build to it was a focus of Impact Wrestling throughout the year, starting with the fantastic match between Sami Callihan and Tessa at Slammiversary (#64).

The two promotions prominently featured on this list are DDT, a company known to push the boundaries in Japan, and Beyond Wrestling – showing the rise to prominence of intergender wrestling in the US independent scene. Beyond has two highly-rated matches in David Starr vs. Mercedes Martinez (#1 intergender match, #49 overall) and Joey Janela vs. Kris Statlander (#3 intergender, #75 overall).

If these were to be included in the “Women’s Match of the Year” list from above, they would both place in the top 10. In fact, Starr vs. Martinez would be #4 compared to all other women’s matches, and in the “Non-Joshi” category it would be #1. This really emphasizes how great of a year Mercedes Martinez had in 2019. She found herself onto the list with matches in a number of different companies such as RISE, Beyond, Shimmer, and The Summit and had four matches total on the list between #49 (vs. Starr) and #219 (vs. Jordynne Grace 8/10). Now that she has signed with WWE we can only hope that her hard work has paid off, and hope even harder that she is given an opportunity to be the great wrestler that she is. Based on my above analysis, it looks like that the trend of women’s wrestling in WWE is not heading in that positive direction – but we can only hope that it changes – for the sake of Mercedes, for the sake of all the fantastic female wrestlers on the WWE roster, for the sake of all the wrestlers grinding in the indies, and lastly for the sake of us wrestling fans who just want to see some good wrestling.