“Let me give you a piece of advice. Be honest, he knows more than you can imagine.”

Trinity’s warning to Neo before he first meets Morpheus in 1999s blockbuster hit The Matrix in what is remembered as “the pill scene” seems an unusual place to begin a wrestling article. However, nothing involving David Starr and OTT is ordinary. As a matter a fact the ScrapperMania main event on March 14—when Jon Moxley comes face to face with David Starr—could be considered his own personal “pill scene”

“Do you believe in fate Neo?”

“I know exactly what you mean”

Last year, Moxley decided he was going to leave the safety and stability of the last seven years and was not going to re-sign with WWE. Moxley wanted out because, in his own words, he was miserable at not having control of his career. WWE had made him a rich man but not a happy one. Moxley felt there was more to the wrestling world than squirting mustard at heels and exploiting his real-life best friends battle with leukemia. On May 25, 2019, Moxley shocked the world in his first post-WWE appearance showing up at AEW’s Double or Nothing PPV. Moxley would follow that up with a debut in New Japan Pro Wrestling just two weeks later.

While Moxley was jumping from the biggest wrestling company in the world to a start-up—albeit one with national television—David Starr has been leading his own personal revolution on the indies.

Starr is politically outspoken and abrasive on twitter. Starr won’t back down from any fight and can’t be controlled by any corporation. Starr is, in his own mind, a visionary that sees the wrestling world for what it really is. Starr is Morpheus. Starr also happens to be one of the best wrestlers on the planet.

Outside of AEW and NJPW, Moxley has made very few appearances elsewhere since leaving WWE. Since October, Starr has established himself as the main man at the top of OTT but he has lacked a credible main event level opponent.

Do you believe in fate, Jon?

“Unfortunately no one can be told what the matrix is. You have to see it for yourself. This is your last chance. After this, there is no turning back. You take the blue pill—the story ends, you wake up in your bed and believe whatever you want to believe. You take the red pill—you stay in Wonderland, and I show you how deep the rabbit hole goes. Remember: all I’m offering is the truth. Nothing more.”

Moxley is not oblivious. He will have seen the videos produced by OTT in the past surrounding Starr, Jordan Devlin and WALTER. He will have heard the buzz that big-time OTT main events garner. There is no place hotter in independent wrestling right now than OTT. The question is does he care enough to swallow the red pill and dive headfirst into the matrix that is the world of independent wrestling. The red pill scenario would see Moxley commit to multiple OTT appearances and build to an even bigger match with Starr than this first match between the pair at ScrapperMania. He would become a semi-regular in places like Rev Pro, PWG and even GCW.

Is that what Moxley really wants?

Alternatively, Moxley could go for the blue pill. Moxley can save himself for AEW and New Japan and still be one of the biggest names in wrestling while having the option to make one-off appearances for NEW or other spot independents across the world.

There is no wrong answer for Jon Moxley in this scenario. He is and will remain a huge star no matter what he does. Nevertheless, he is a fork in the road and he has two vastly different paths he can take.

Will Moxley take the red pill or the blue pill? 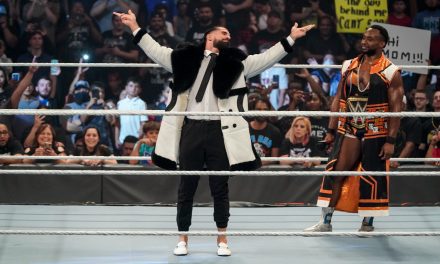