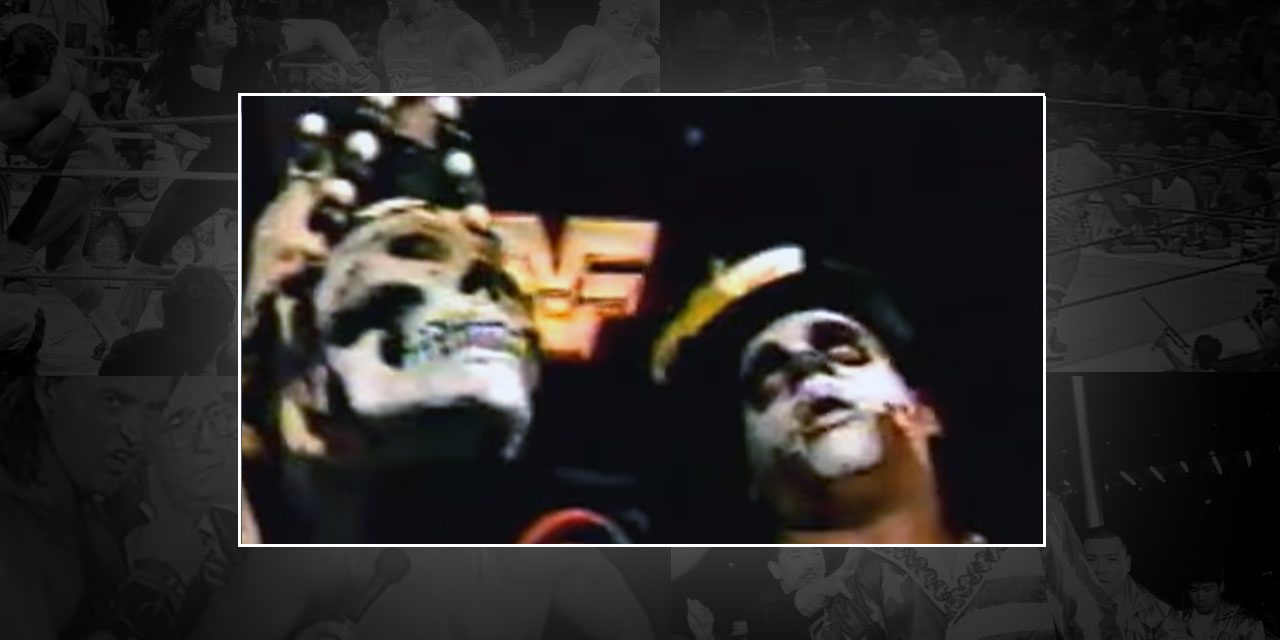 The collection of matches and segments I am watching for this series come from a 1992 Yearbook created by Goodhelmet, a longtime poster at the Death Valley Driver Forum and other wrestling places. A cross-section of the best (and worst of wrestling within a certain year), it is a great snapshot of everything of importance. The footage is taken from May 14-16.

Talks of my demise (or my hiatus) were greatly exaggerated as I return to chart a course through the stormy waters of 1992 in That Was The Year That Was. After a US-centric last article, it is Lucha Libre that initially takes center stage, though not always down in Mexico as the luchadors also head north of the border to showcase their talents.

It all began with El Hijo del Santo taking on Espanto Jr. on May 14. This was for UWA and the footage was from a handheld camera at ringside. The quality of the video was good, though dark for the most part so it was occasionally difficult to see what was actually happening in and around the ring. My brief research showed me that the two men had fought in a mascara contra mascara contest in 1986, whilst Espanto also lost his hair to Santo several times at the tail end of the decade.

The first thing to note is how filthy the ring is – it is disgusting. Between the rips and tears in the canvas and the myriad bits of debris littering the thing, I don’t envy either man wrestling on it. This was two out of three falls as per usual with the primera caida seeing some sound grappling that had Santo mostly in control ending with him pressing home the advantage with a top rope headbutt and camel clutch for the submission. When Espanto Jr. unsurprisingly launched his comeback in the segunda, the snap to his offense and Santo’s selling all added to the engaging spectacle. This led to a well executed top rope splash by Espanto to even things up at one caida each.

The handheld nature of the footage meant things felt incredibly heated heading into the tercera caida as the fans were fully behind both luchadors. The pace definitely quickened as nearfalls were traded, before Espanto Jr. did the Chris Hamrick bump through the ropes (or should it be the Espanto Jr. bump?) and Santo took to the sky in the first out of the ring dive of the contest. The limited aerial manoeuvres up to this point meant this was much more effective than it might have been. Espanto kicked out of several pinfall combinations, missed the top rope splash that earned him the segunda, fought his way out of a camel clutch attempt and kicked out of a rolling senton before handing Santo a rare loss (winning the UWA World Welterweight Title in the process) as he turned a slam into a small package. Just a really well put together match that built to the finish effectively.

Annoyingly there is no footage of this match online, but I am reliably informed that Espanto Jr. is one of El Hijo Del Santo’s best opponents, so here’s the mask versus mask match from 1986.

El Hijo Del Santo was a busy boy as a day later, he was in Japan teaming with Atsushi Onita and Mil Mascaras to take on the team of Tarzan Goto, Negro Casas and Giant Warrior (a man perhaps better known as Nitron) in a UWA, FMW and WWA crossover show in Tijuana. When you have an opening exchange of Onita and Goto headbutting each other several times in a row, the tone gets set pretty quickly as the two brawled around ringside within the first minute. Shortly after the heavies came the quick exchanges of Santo and Casas, a pairing that the crowd seem most invested in. Onita and Goto’s presence meant things were never a million miles away from degenerating into complete madness, with both men bleeding heavily for their art.

Although this was interpromotional, the wrestlers generally stick to what they know in terms of opponent. However, it was the mixture of styles that made this a consistently fun watch. The best exchanges tended to be Santo and Casas, whilst Mascaras offered Casas very little when the two luchadores tangled in the ring, even shrugging off some strikes to land some of his own. The finish was abrupt and confused everyone: Onita landed a DDT on Nitro for the pin, before both teams seemed to realise the match required a second fall. This came moments later with Mascaras submitting Casas to an abdominal stretch. A fun watch, if a little confused by the end.

The teams have been mixed up a little by the time this tour headed to Los Angeles the next evening as El Hijo Del Santo teamed with Tarzan Goto and Atsushi Onita against Negro Casas, Horace Boulder and Tim Patterson. The version on the set was a handheld camera version, thus allowing me to get a clear sense of the vociferous nature of the crowd. Immediately, and I do mean immediately, Onita, Goto, Patterson and Boulder fight their way into the crowd with Onita swinging chairs wildly at Boulder in particular. The very nature of the handheld camera meant I was limited in what I could see as often the viewer chose to follow the wild brawling outside of the ring rather than the (I can only assume) incredibly competent lucha libre between Santo and Casas. Onita and Boulder ended up in the bleachers and had fans scattering to get out of the way.

When we do see Casas and Santo properly go, they are seamless and the crowd erupted as Santo nailed a dive to the outside. This almost signalled a moment for the match to calm down as everyone finally ended up back at ringside. This night, they seemed to realise there was the need for multiple falls as Goto pinned Patterson following a facebuster, before the wild brawling continued apace.

A miscommunication between Patterson and Casas allowed Santo to hit his rolling senton with corner dive spot, though he was almost immediately pinned by Casas with a La Majistral cradle. The whistles from the fans were loud as they didn’t like that outcome, though they were soon in higher spirits as Goto and Onita battered Boulder. The tercera was the call that was most akin to an actual tag match with no brawling into the crowd, whilst the de facto tecnico team swallowed their opponents up for the best part of three minutes before Onita pinned Boulder following a butterfly powerbomb. The lack of tension towards the end hurt this a bit, but the cool lucha libre work played out against a backdrop of wild brawling was pretty fun.

From the fun of the action in Los Angeles, we head to more Crush vignettes on WWF Superstars… This time, the WWF have him in an actual scrapyard, crushing cars as a means of relaxation. The vignettes have been so poor, with the bulk of this one seeing Crush watching a car slowly, and not very visually impressively, getting crushed.

More footage from the same episode focused on the Ultimate Warrior celebrating a win in the ring as Papa Shango watched on from the ringside area. Shango’s skull smoked, his body convulsed, and Warrior ended up falling off of the apron in pain! Shango felt like trying to strike the gold they did with characters like the Undertaker and failing. It could have worked, but it all felt way too cartoony in execution.

The ballad of Eric Embry and The Moondogs continued down in Mid-South as footage was aired of the Embry’s return contest following his ‘blinding’. His match was a singles contest between Embry and Moondog Spike, so unsurprisingly it ended with a disqualification as the other two Moondogs headed down to the ring. The footage immediately goes to a later contest with Jerry Lawler and Jeff Jarrett against the Moondogs, providing the same violent walk and brawl they’ve done for the last five months. After Eddie Marlin and Richard Lee also began to fought, it was quelle surprise when another disqualification abounded and it ended up being Embry who came down to the ring to save Lawler and Jarrett.

The bigger focus of the whole segment included on the disc (one that ran nearly eighteen minutes) was Jerry Lawler and Eddie Gilbert signing a match to unify the Southern Heavyweight Title with the Global Heavyweight Title. Having signed the contest, Lawler talked long and loud about his victory over Kerry Von Erich in the last unification match he was involved in, as well as slagging off the world champions in over groups who were ‘company champions’ who were unwilling to step outside of their own promotion.

Things stepped up the moment Lawler talked about how much Gilbert has been trying to fill his boots for years. Gilbert wasn’t messing around when he was given his chance to talk – he stepped up and strangled Lawler whilst proclaiming he was going to kill the King! I loved how Lawler ran down Gilbert for no real reason, whilst Gilbert earned some measure of revenge almost immediately.

The footage from Memphis kept coming as a squash between Moondog Spot and a jobber ended up with a six man brawl as first Embry, then the other Moondogs, and finally Jarrett and Lawler hit the ring. This was all to build up to Lawler requesting a six man tag from Guy Coffey, one which would also see Marlin in a position to manage Lawler, Jarrett and Embry. The suggestion made is that the losing team needed to leave Memphis, though I’ll believe that when I see it. Jarrett and Lawler are overshadowed by the naked aggression of Embry’s promo, though in selling his anger it almost comes across a little corny in nature.

The last clip from the promotion only served to highlight the dichotomy of what Memphis had to offer – a plug from Lawler for a benefit softball game to raise money for a young college guy who was left in a wheelchair after a serve injury.

The final segment of this week’s article was from WCW as Tony Schiavone invited Ricky Steamboat, followed by Rick Rude, out to discuss the accusations put out there by Madusa about Steamboat’s behaviour. This was all about selling the anger that Steamboat felt, discussing his fire breathing as a message to Rude and reiterating that his focus is entirely on the United States Title. Rude’s delivery was much more measured than Steamboat’s, yet his delivery was that much more effective as he talked about how Steamboat’s eyes betrayed the lies that he had spouted. Steamboat’s forte was never on the microphone, but he does a decent job of continuing to sell the animosity.

An El Hijo del Santo heavy selection, which isn’t necessarily a bad thing at all. Though some of the segments and action around it was decent, if unspectacular, the lucha libre footage (especially alongside FMW) is well worth a look just for how weird it all is. Enjoy and join me next week as That Was The Year That Was.