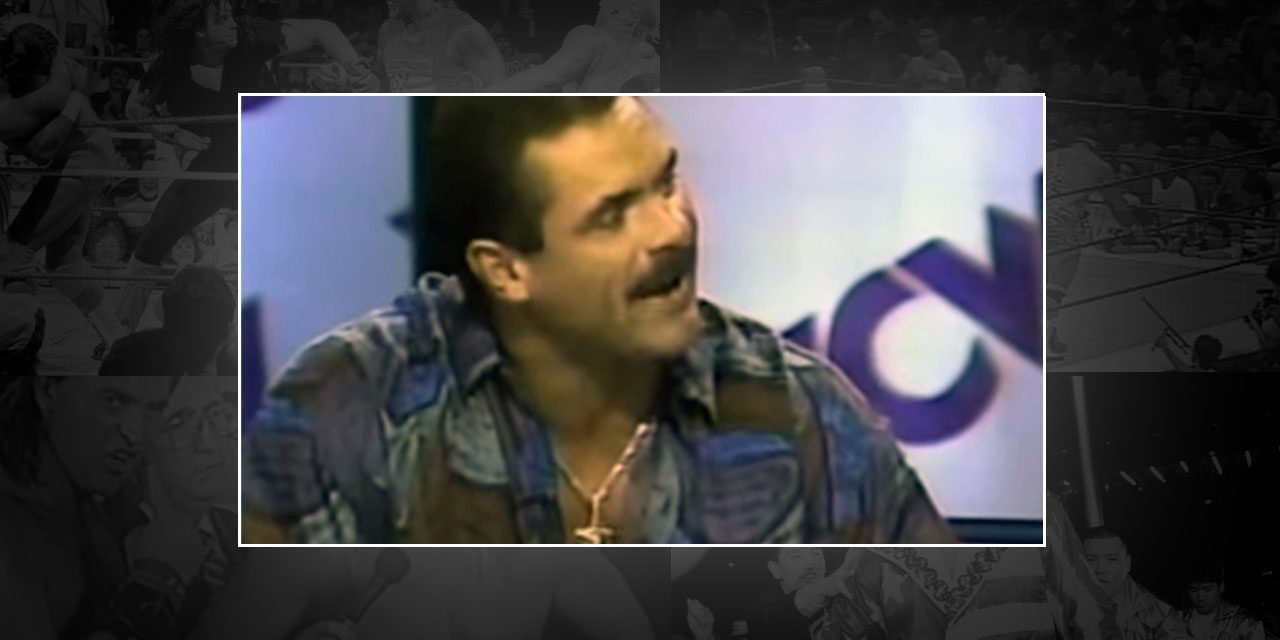 The collection of matches and segments I am watching for this series come from a 1992 Yearbook created by Goodhelmet, a longtime poster at the Death Valley Driver Forum and other wrestling places. A cross-section of the best (and worst of wrestling within a certain year), it is a great snapshot of everything of importance. This article covers footage from May 9.

A week based solely in the good ol’ US of A! Action from WWF, USWA and WCW were the focus as title belts were on the line and work/shoot comments were getting thrown around like confetti.

This week begins with a trip to WWF Superstars as Ric Flair and Randy Savage fired barbs at each other over pre-taped promos in order to promote a Boston Gardens show. Flair and Mr. Perfect proclaimed Savage the ‘temporary’ champion as The Nature Boy promised to not only take the title, but Elizabeth as well. In return, Savage channeled the Boston Celtics and Bruins and their apparent pride as he warned Flair that he had taken things to a whole different level than the usual title match.

After a brief Papa Shango segment that saw him burning Ultimate Warrior photos and talking about the dead rising, the aforementioned Ric Flair fought Sergeant Slaughter, who found time to record a Happy Mother’s Day message that was relayed pre-match. Before the men could get going in earnest, The Mountie came down to ringside to get a closer look, before soon being handed a box by Jimmy Hart. Slaughter had one of my favorite bumps – the bump over the top turnbuckle – and he took it well during the course of this match. However, the focus was on the box as Mountie revealed the shock stick, fake electricity buzzing and all.

An attempt to slingshot Slaughter hilariously failed and left both men lying in the middle of the ring for a moment as if they were playing a kid’s game. Unsurprisingly, the Mountie’s shock stick came into play as he shocked Slaughter, complete with more buzzing and a comical sell job by Slaughter. That was enough for Flair to get the win in a match that showed Slaughter still had some fire, but was all about the ridiculous shenanigans around it. This even included a stretcher job as Slaughter was carried out.

Heading back to USWA, we join them just in time to see the reveal that Eric Embry’s eyesight is all better! A promo that had Embry in a medical gown and facing away from the camera saw an impassioned delivery about how he wasn’t going to show his face until he could do it in front of the Moondogs. This was great primarily because Embry also sold how dangerous the Moondogs are as he listed Austin Idol, Junkyard Dog and Jimmy Valiant as people they have run out of Memphis.

This was all part of a larger segment with Richard Lee and promoting the next Coliseum show as Embry was due to face Moondog Rex, the Moondogs defend the titles against Jerry Lawler and Jeff Jarrett, and Lee meets Charlie Trapper in a boxing match. The Moondogs are hungry, Lawler should stick to singles matches and Trapper is fat are the main takeaways from a short promo.

Later on in the same show, we get our first shot of Eddie Gilbert in USWA as he is suited, booted and holding the Global Title. This is great because Gilbert was the big face in Global, yet comes out as the heel, complaining about how no-one wanted to accept his challenge to go title for title against the USWA Champion. Eddie Marlin, Guy Coffey (stand-in matchmaker for Marlin as he is still suspended) and security come out, though Marlin and Coffey argued as much with each other as with Gilbert.

It took Tom Prichard coming out to ramp things up a notch as he belittled Gilbert for turning up and stirring things up rather than busting ass to get to the top. This felt like it had elements of worked shoot in here as Gilbert continued to go back to ideas around Marlin’s guys and people who are company men, before Prichard ended the segment by challenging Gilbert to a shot at the Global Title – a challenge that Gilbert accepted. A really fun segment that’s well worth a watch.

A less fun segment followed as Dirty White Girl tried to implore the fans at home to sign a petition to get ‘Tony’ reinstated (Dirty White Boy). Some people are natural orators – Girl definitely isn’t.

Things are put into even starker contrast when Paul E. Dangerously was up next as attention switched to WCW Saturday Night. Dangerously was with Jesse Ventura, talking about how K Allen Frey was heading a conspiracy against the Dangerous Alliance. Including lines about how Frey had as bright a future as Mike Tyson (recently arrested on rape charges) and how Frey would end up begging Dangerously and Ventura for a job, this was Dangerously at his angry, aneurysm inducing best.

When you see the names of Nikita Koloff and Mr. Hughes on the marquee, you aren’t expecting chain wrestling and intricate submission holds – you want a hoss fight. That’s indeed what we got as staples such as shoulder block stand offs and tests of strength are whipped out early, whilst we get some fat man offense as Hughes splashes Koloff against the middle rope, Bossman style. This was all seemingly to build to Koloff against Vader the following evening in the Omni and after catching Hughes on the top turnbuckle with a slam, Koloff overcame another brief Hughes flurry to nail the Sickle for the finish. This match gets some positive noise online and it is pretty good considering what might be expected, but it is nothing special.

Having had Koloff and Barry Windham on WCW Saturday Night to be interviewed by Jim Ross, Rick Rude got a chance on this show to air his grievances, and air them he does. He referenced WWF holding him back as he believed he should have had more shots at the title as Intercontinental Champion, another example of comments designed to come across as a shoot. With a focus on Ricky Steamboat’s recent run-ins with Madusa, she ended up joining Rude mid-interview, though Rude was soon excited by a woman in the audience who asked how to become his first lady. Things take a turn for the weird as two women began to argue about having affairs with Steamboat, explaining why Rude had been so intent on changing the format and moving immediately to the audience questions. It is a faintly ridiculous segment, though Rude’s earnestness in his apologies to Steamboat are hilarious as the segment drew to a close.

(a clip of the above interview that focuses on WWF)

The main event of the show and the final match for this week is a WCW World Television Title Match as Steve Austin defended against Barry Windham. This was a rematch from a two out of three fall match that went to the television time limit with Windham 1-0 up a few weeks back. A little like Arn Anderson and Big Josh from the past week, the match started slowly as a clear precursor to going long, though I hold out more hope for this contest in terms of quality. Windham’s size was emphasized in the middle of the first fall as he practically stepped over Austin in a leapfrog spot rather than take to the air. The match ebbed and flowed with both men knowing when to up the pace to drag the audience into the contest – a clothesline and a suplex both earning Windham nearfalls that had the crowd ready to celebrate. Around ten minutes into the contest, the fans had their chance as a superplex gave a bloody-mouthed Windham the first fall.

This was always clever booking when putting a face challenger against a heel champion as it implied that the championship could have changed title if the heel managed to hold onto the gold by hook or by crook. The second fall also saw a more intense Austin as he desperately tried to fight his way back into the contest. This led to a pretty clean second pinfall after Austin nailed the Stun Gun, though the producer chose to showcase Dangerously’s reaction rather than the pin itself.

The intensity of Austin continued into the deciding fall whilst the match continued to be fought pretty much clean, allowing the contest to breathe without much in the way of extra-curricular activities. What did somewhat distract things was a ticker that proclaimed Ricky Steamboat’s innocence from all allegations that took place earlier in the night, just as the match approached its final minutes. Considering how relatively clean the contest was, it was an attempt by Austin to cheat that cost him; an errant belt swing allowed Windham to duck and roll-up Austin to take the title. Admittedly, he didn’t look like a winner after a belt shot connected, as did another Stun Gun. A really good TV match that allowed both men to showcase what they were capable of over 25+ minutes.

With the week being a little bit limited on the in-ring action, it was good to end with a real cracker in Windham’s victory over Austin for the World Television Title. As for the rest, the Gilbert segment that kickstarted the USWA versus Global feud was also cool. We’re leaping back into lucha and puro in two weeks time as I take a short hiatus for a much needed holiday! Join us in two weeks as I continue to check out 1992 as That Was The Year That Was.