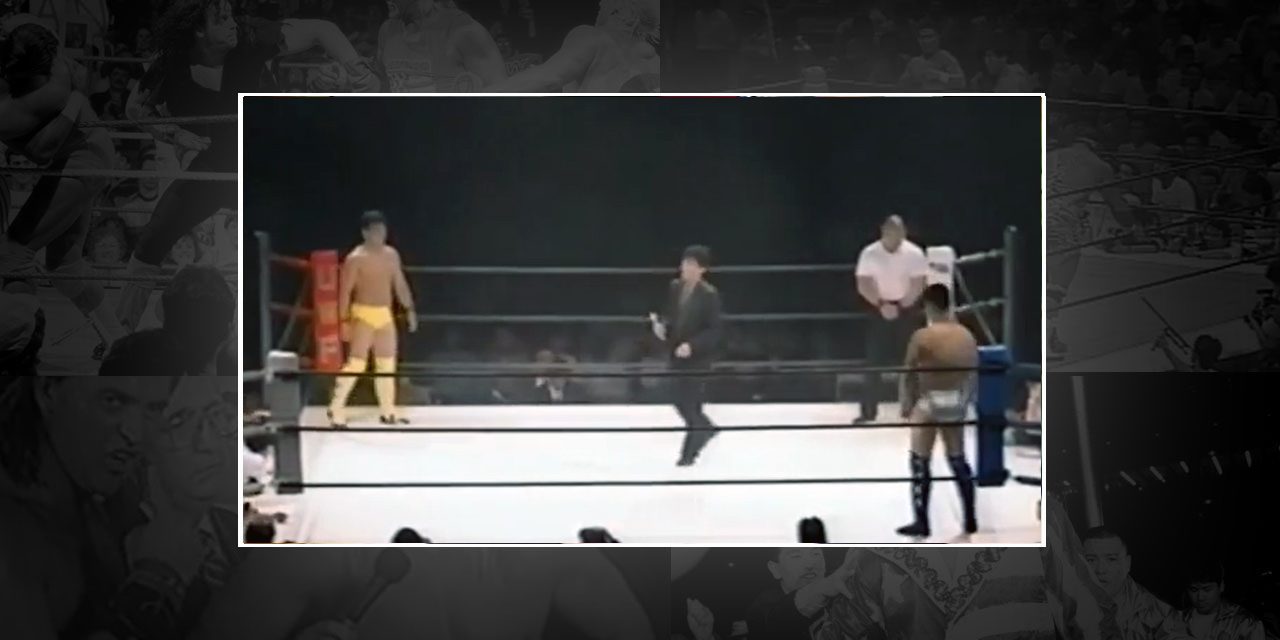 The collection of matches and segments I am watching for this series come from a 1992 Yearbook created by Goodhelmet, a longtime poster at the Death Valley Driver Forum and other wrestling places. A cross-section of the best (and worst of wrestling within a certain year), it is a great snapshot of everything of importance. This article covers footage from May 2-8.

With WCW Saturday Night, a Champion Carnival final and the first year anniversary of UWFi, there is an interesting mix in store this week. Let’s dive straight in with the action Stateside.

For this episode of WCW Saturday Night, Bill Fralic has been replaced by Jason Hervey, who gets to sit alongside Jim Ross for a Barry Windham interview. This is significantly shorter than Nikita Koloff’s offering from the previous week, perhaps unsurprising considering the importance of Koloff offering Sting his help to overall storylines. Windham talks going for the WCW World Tag Team Titles as both he and Hervey talk up his tag team partner, Dustin Rhodes. Just as things turn to talking about the WCW Television Title, a bearded man in the audience started to heckle Windham, who cut the interview short to confront the man. It turns out to be Paul E. Dangerously, who soon hightailed it out of the area after Windham ripped the beard right off of him. Simple angle, but continues to see the WCW versus Dangerous Alliance feud simmer along nicely.

Speaking of the feud, we get some pre-tape of a Paul E. Dangerously and Madusa interview in which Dangerously tried to suggest that Ricky Steamboat was a pervert for harassing Madusa and laying his hands on her. The cheers of the crowd make it clear that Steamboat was on his way and he arrived to a rapturous response, brandishing a flaming torch. Both Paul E. and Jesse Ventura left the scene as Madusa labeled Steamboat a ‘woman beater’, before the footage cut to a later interview with Madusa alongside Rick Rude as the Ravishing One lambasted the Dragon for his treatment of his woman. This is a strange angle with the benefit of hindsight as it is a serious subject played out in a promotion that was still somewhat comic in its presentation.

That couldn’t be made clearer by the big two out of three falls main event match as Big Josh the lumberjack headed to the ring to face Arn Anderson. I personally am a big Matt Borne fan, but the Big Josh gimmick isn’t exactly him at his best. Anderson is great when it comes to stooging around for an opponent and Josh hits the Northern Exposure early (vertical splash), but Anderson managed to roll to the outside to avoid the pin. The pace of the first fall was slow, setting up for a long contest, as Josh worked on the arm and back of his opponent. However, a sunset flip by Anderson after Josh reversed a piledriver attempt saw the Dangerous Alliance member grab the ropes for leverage and the first fall.

The pattern remained the same on the second floor as Josh controlled the (admittedly slow) pace for the most part. That was until an attempted clothesline at ringside had Josh collide with the ring post, allowing Anderson to take over with vicious arm work using the post and the ropes for additional leverage. Things did pick up for a short while, but when the back and forth between Ross and Hervey is the most notable feature of a match, it doesn’t speak volumes for it. The finish was at least interesting as Josh turned an axehandle from the second rope into a reverse atomic drop, before using a roll-up with a handful of tights to draw level.

Having already gone over twenty minutes, it goes for another ten or so. Neither man really has the offense to carry it this long, though you have to (I guess) give credit to WCW for having the balls to put a 35-minute match with Josh in it as your syndicated TV main event. More stuff happens, then Anderson hit a spinebuster for a win. Too much of this felt like it was just stuff, which was the biggest issue with it. I guess I could have seen worse matches, but they wouldn’t have taken up close to forty minutes of my life as this one did.

Over to Japan for the last three matches this week, starting with the Champion Carnival Final between Mitsuharu Misawa and Stan Hansen. Hansen was still the current Triple Crown Heavyweight Champion, so a win for Misawa could put him clearly in line for a title shot. Rather than the quick start that fans were used to from Hansen, Misawa had the better of the early going as he targeted the arm, keeping Hansen within reach of him at all times. The feeling that this was going longer, whilst also being at the end of a tough tour, was clear as Hansen’s brief resurgence also saw him ground Misawa with a chinlock. The intensity wasn’t exactly there in the first half. Hansen landed a DDT to stop Misawa’s onslaught, but was clearly hampered by the arm, especially as it was a target for repeated attacks throughout.

It wasn’t until the final five minutes that Hansen threatened to get going, landing a powerbomb for two, but Misawa was soon knocking on the door of victory again with a splash and a jumping elbow strike. A clever spot had Hansen hit a flash lariat, only for Misawa to get his foot on the rope for two. He wasn’t as lucky shortly afterwards as Hansen landed a lariat with the injured arm, when Misawa had initially blocked another attempt. Neat finish aside, this was a bit of a let down and lacked the intensity I was expecting.

On the May 8, UWFi ran its first-anniversary show which included an interesting looking match on paper as Nick Bockwinkel (58) and Billy Robinson (53) were scheduled to meet in an exhibition match. After a pre-match speech by Lou Thesz – a speech that knocked WWF and WCW in one fell swoop – short promos with Bockwinkel and Robinson talked about wanting to showcase real wrestling, though Bockwinkel also hoped that they could offer a good contest.

As it is just an exhibition scheduled for ten minutes, it was interesting to see how much they were willing to put on the line in terms of effort – any doubts were assuaged quickly as some slaps and Bockwinkel’s roll through of a toss into an armlock had the crowd excited for what they were seeing. Robinson’s double butterfly suplex was over with the fans and they cheered as he looked to utilize it several times. It was Robinson who controlled the bulk of the relatively short time limit and landed the butterfly suplex as the bell rang to end the match. A real fun little offering that is well worth a look, especially for fans of the two guys.

The main event of the show saw Gary Albright taking on Nobuhiko Takada in classic gaijin versus native action. After all of the introductions and the national anthems, Takada had to weather an early storm, including a belly to belly suplex before keeping Albright down. Strikes and a back suplex had Albright in some trouble early on, but his size came into play as he began to manhandle Takada with throws of his own. This included successive belly to belly suplexes that saw him ragdoll Takada without too much hassle.

However, Takada’s strikes were still dangerous and he was gaining success when staying out of the reach of his monster opponent. With the points tallies being a key thing in UWFi, Takada opened up an eight-point lead with the score 10-2, leaving Albright needing something major to pull off a victory, and pull it off he did. Two admittedly ropey looking German suplexes ended the night for Takada who had seemed on the cusp of winning. Considering I’m not always the biggest fan of this style of wrestling, this as a great battle and a really good finish as Albright grabbed victory from the jaws of defeat.

This was a bit of a slog in surprising places (Anderson/Josh, Misawa/Hansen up until the finish), whilst being revived by …shoot fighting? Yeah, I didn’t imagine that it would ever be the case, but Takada and Albright was a banger to finish the week. See if my sudden interest in shoot fighting lasts any longer than a week as That Was The Year That Was. Thanks for reading.