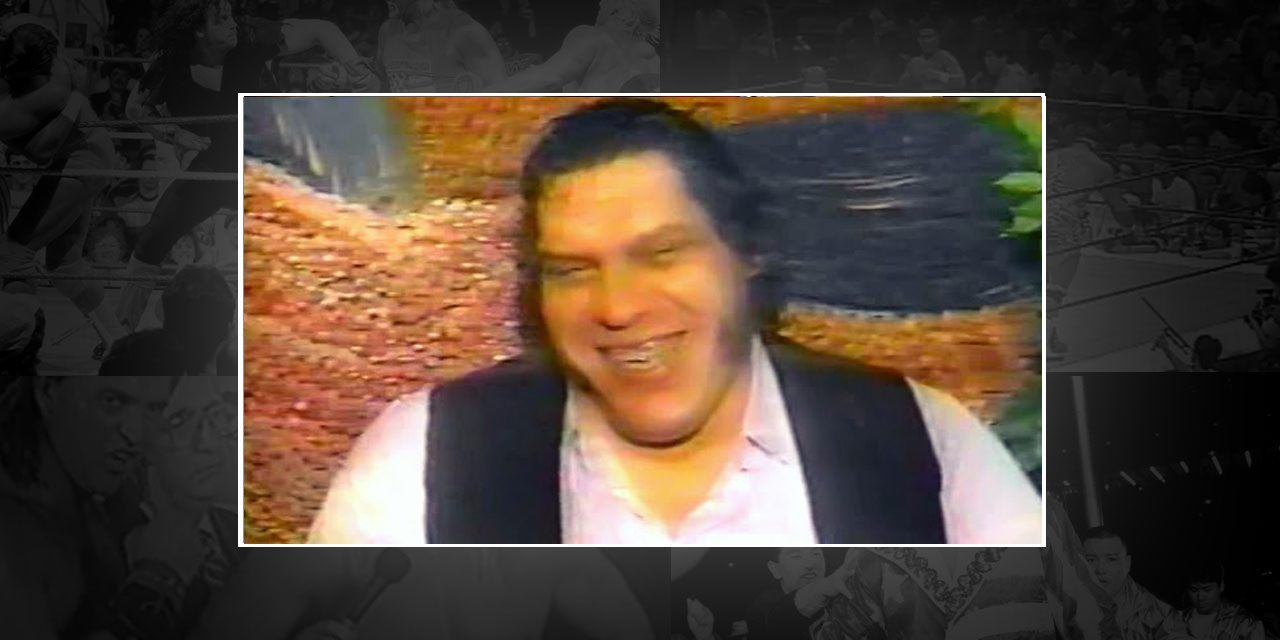 The collection of matches and segments I am watching for this series come from a 1992 Yearbook created by Goodhelmet, a longtime poster at the Death Valley Driver Forum and other wrestling places. A cross-section of the best (and worst of wrestling within a certain year), it is a great snapshot of everything of importance. This article covers footage from April 26-May 2.

This week begins with some huge matches on both the All Japan and New Japan sides of the wrestling divide. Firstly, we’re back to the Champions Carnival as Mitsuharu Misawa met Terry Gordy in a bid to secure his spot in the final (again, I assume this might be airdate rather than the date of the actual contest). It is always noticeable to me how cool Gordy look arounds this time period compared to his ‘Baby Dewey’ look of the 80s. For long stretches, following getting angered by a Misawa punch to the face early on, Gordy dominated his opponent with blows and slams, cutting off brief comeback attempts with relative ease. The fans are fully behind Misawa though, popping big for a springboard back elbow that sparked the first real turning of the tide in his favour as he then landed a suicide dive moments later.

Still, Misawa was again in trouble as the match pushed towards the fifteen-minute mark as a clothesline from Gordy hurt both men, before the big American grounded Misawa with a cobra clutch. Misawa wasn’t to be denied though as he managed to kick out of a powerbomb attempt, reverse another attempt into a rana for a nearfall, and manage to turn what had looked like a loss into a win with a crucifix pin after ducking two clothesline attempts. A dominant performance by Gordy, yet Misawa looked good in managing to fight through the onslaught and steal the win.

A heated feud was set up to be resolved in the Top Of Super Juniors final as El Samurai and Jushin Liger collided. Samurai had won the previous contest within the tournament and set the tone by spitting in Liger’s face rather than accepting a handshake. This only continued as the bell went with slaps on a break, an attempted mask rip and an assault with what looked like a beer bottle at ringside leading a tombstone on the padding. When Liger finally managed to gain a footing in the contest, his revenge was just as cruel as he ripped Samurai’s mask almost clean off before powerbombing him on the concrete having moved back the pads.

The intensity of Liger’s assault was excellent as he nailed Samurai with a koppou kick in the corner and multiple shohtei palm strikes, before launching himself out of the ring with a moonsault. Samurao still had life in him though and had Liger in some serious trouble with a grounded clutch and a sleeper with a body vice. Big bombs were landed late on with Samurai almost getting a pin with a rana and German suplex, before Liger fired back with a top rope DDT and back superplex. These two high impact moves left Samurai vulnerable to a top rope rana that earned Liger the victory and the tournament as a whole. This was a great match that was full of exciting and impactful offense throughout.

The following night after the Top of the Super Junior Tournament was another huge night for New Japan, with one of the significant contests on the card seeing a rematch from earlier in the year as Hiroshi Hase and Keiji Muto faced Big Van Vader and Bam Bam Bigelow. This was a chance for the native team to regain the titles they had lost, and they were rocking both opponents in the earlier exchanges, including an impressive belly to belly suplex by Hase on Vader. Not to be outdone, Muto scored a two count off of a German suplex on Vader as the challengers continued to outmaneuver the champions.

Unsurprisingly, they didn’t have it all their own way and Hase ended up busted wide open as the match headed into the second half and drenched in his own blood. This became a fight for survival as Hase managed to kick out of a Vader Bomb as the champions began to unleash an onslaught of offense. This all made the comeback even more heated and effective, especially as Muto and Hase tried their best to isolate their two opponents from each other. At times, it felt the ttile change was nevitable, but a vicious Vader chokeslam on Hase saw the champions retain. A much better contest – perhaps due to recency bias, I’ll be honest – than the previous one. Well worth a look.

The main event of the show was also included on the set, though only the finish. Riki Choshu took on Scott Norton with Choshu’s IWGP Heavyweight Title on the line. Of what was shown, Norton caught Choshu with three consecutive powerslams, though what was supposed to be a missed top rope splash practically had Norton land on Choshu due to botched timing. This set up multiple Riki Lariats leading to Choshu retaining the gold. It sold how tough Norton was, though I feel that the match didn’t look the most engaging or heated from what was shown.

A new promotion found its way onto the collection as a UCW match between Freight Train Fulton and Bill Wilcox was included. According to my research, UCW was getting some buzz and these were two wrestlers considered to have a bright future. This was a promotion ran by John Mcadam, adding another interesting wrinkle to this contest. A handheld that seemingly is no longer on the internet, this was a classic heel power guy versus a face flyer and it was action-packed from start to finish. As might be expected from less experienced wrestlers, there were some sloppy moves in places, but you could see why there was some buzz about both men. The action was clipped in places so the footage moved from a leglock by Wilcox to a tombstone by Fulton, somewhat disrupting the flow for a viewer such as myself. It also somewhat implies that they went longer than the little over twenty minutes suggested on the disc.

A proto-ECW piledriver through the table only briefly halts Wilcox, who soon has his revenge with a chairshot. This wasn’t even at the halfway point of the match as the highspots continued for the fervent fans in attendance. Wilcox used some interesting submission moves, often ones that looked a little on the ambitious or awkward side of things, though a tiger feint kick and subsequent plancha near the end were cool. The match must have gone thirty minutes as a top rope splash by Wilcox saw the bell ring at two as the referee waved off the contest. Fun and interesting to see two guys really going at it in front of such a small crowd.

Somewhat of a curio followed as an interview with Andre the Giant was shown on a UWA television program in Mexico. This included a montage of photos as well as questions going literally back to where he was born and how long he had been wrestling. The translation over the top made it hard to hear in places, though the most interesting section was probably when he claimed his toughest fights were against Don Leon Jonathan and Hulk Hogan, as well as claiming wrestling is more about the entertainment now than it was before.

The Rick Martel and Tatanka feud was one I remembered from my 1992 Year in Review VHS, including this very specific angle. Mid-Tatanka squash, Martel gave an interview talking about how Tatanka smelled so bad, he’d need to spray extra Arrogance to counter it. After Tatanka finished the match, Martel headed down to the ringside to do just that. He was made to look foolish by Tatanka pushing him off of the apron, but gained a measure of revenge by spraying Arrogance into Tatanka’s eyes. I felt it at the time and I feel it now – Tatanka really telegraphed his attack off of the apron that led to him getting sprayed in the face.

Unfortunately, I couldn’t find footage of the next Crush vignette to air. Apparently he liked baseball and a young Crush crushes a baseball. That was it. Crush’s debut vignettes have one thing going for them – they’re short.

We’re back to Memphis for the next sequence of clips and the Tom Prichard/Brian Christopher merry-go-round with regards to the Southern Heavyweight Title just continues to go on. Arena footage of the two in action to settle who is the champion after Eddie Marlin’s interference led to the title being held up last time. This time, having been suspended, Marlin is in the crowd instead. This offered a distraction to Christopher as he turned to mock and gloat Marlin whenever he was in control. Eventually, this was too much for Marlin as he headed to ringside, just in time to be involved in a finish that saw Christopher use a chain to halt a sunset flip attempt for the pin. With Marlin’s protestations, Prichard eventually got a little too close to Little Brian for my liking as he rooted around in Christopher’s trunks and found the chain. However, the belt was held up AGAIN as the chain and Marlin’s involvement were considered equally as damaging to the result. This was, and continues to be, as convoluted as it sounds.

One thing that wasn’t convoluted on the same show was a brief Eric Embry promo. The bandages had been removed, yet the eyes remained closed and the area around them looked sore. The words were simple – the Moondogs and Richard Lee better hope that he didn’t get his eyesight back, or he’ll kill the three of them. Simple, but effective.

To finish the article this week, we are brought once more to Smoky Mountain Wrestling for an interview with the Heavenly Bodies and Jim Cornette. The final of the tag tournament would see them versus either the Fantastics or the Maulers (Rip Morgan and Jack Victory). This was all about Cornette suggesting that they were more than capable of beating either team in the final, though what was notable to me was how much Tom Prichard seemed to pattern his promo delivery on Roddy Piper. A poundland version of Roddy Piper, but Piper nonetheless.

Normally, I’d include WCW Saturday Night action from this day, but with a forty-minute segment that covered an Arn Anderson versus Big Josh two out of three falls match, that can be saved for another day. The best action by far in this selection was that offered by New Japan with both the juniors and the heavyweights turning up to fight. Join me next week for Anderson versus Josh and much more as That Was The Year That Was.