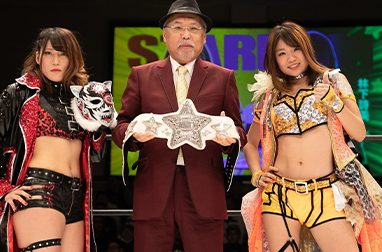 Expectations were high for this show with the top two matches expected to deliver good matches.  The added surprise of who will be joining Giulia’s faction only added to the excitement coming into this one.  To cap it all off the word coming into this show was that it could be a record attendance for Stardom (it was, 1602 fans is the official number) so this is expected to be a big show for Stardom as they have high expectations to meet and a lot of new fans to win over.

A triple threat sprint from the high-speed division kicked the action off.  Kid and AZM were their usual selves here as some of the spots they do are insanely complex and yet they pull them off with ease.  Not much needs to be said about this one AZM pinned Skye to win a good opener.  ***

These kind of matches are always enjoyable as the rookie team faces the established competitors.  Other companies definitely pull this style of match off better than Stardom does but this one did its job in allowing the rookie team to shine while allowing the new Oedo Tai to show off what they’re all about.  Under Kagetsu Oedo Tai became loveable rogues but under the new leadership, they’re just bad people that take joy in cheating and mocking their opponents.  Saki getting the win is a good choice as she needs to build some momentum in her new role.  ***1/4

This is Kagetsu’s final match in Korakuen Hall with Stardom and there were few better choices to face her than Tam Nakano.  When Tam debuted in Stardom she was a member of Oedo Tai, back when faction alignment meant more than just being picked in a draft, and two years ago at Stardom’s 7th Anniversary show she was forced to leave Oedo Tai following a loss to Queen’s Quest.  After that match, Tam promised to start over and now two years later she has surpassed Kagetsu and snatched the torch right out of her hands. ***1/2

This followed the usual KyoNami formula.  Kyona was the face in peril and then makes the hot tag to Konami.  Konami proceeds to commit murder with her legs and all hell breaks loose.  The parts of the match with Kyona and Hayter beating on each other were definitely the highlights but the match dragged in the middle.  Hayter and Priestley winning was no surprise as Stardom is very high on both and with Oedo Tai rebuilding it’s a good idea to add some titles to the mix. ***1/4

This was the surprise return of Syuri to Stardom as she was one of Giulia’s two surprise partners.  Maika was less of a surprise as Giulia openly recruited her at a JUST TAP OUT show recently.  For anyone that hasn’t seen Syuri, I imagine she came away from this one making a good impression.  For those of us that have seen Syuri’s work outside of Stardom we know that this is a great addition to the roster and that she will inevitably have great matches with some of Stardom’s other elite-level strikers.

I, like most people, am still waiting on Giulia’s matches to hit a high level but her pairing with Hana is working wonders for both in terms of crowd reaction.  While Giulia doesn’t get big reactions she feels like a star and beating Hirsch, who has been protected since joining Stardom, is another big win for her.  The match itself had its fun moments but the work is secondary to the brewing storyline between TCS and DDM. ***1/4

This one was just starting to heat up when Utami got busted open hard way on the ring apron.  While that made for some cool visuals it definitely threw Arisa off as Utami had to be on dream street for a bit afterward.  Once Utami regained her bearings they got things back on track but this one just never felt like it had a chance of being great.  What we got was pretty good and Utami looked great for someone with a probable concussion but I’m hoping these two meet again further down the line.

I mention this in almost every Arisa match but towards the end she got cocky and when it looked like she had the match won she decided to pick her opponent up and deliver another head kick.  It makes her look ruthless but I also feel like that will inevitably be what costs her the title.  ***1/4

Not every match needs to be one with an underlying story and drama in every move.  Some matches are just a collection of really cool moves that are cool.  That’s what this match was, they attempted to do some limb work on Mayu’s arm but that was quickly forgotten very quickly.  Saying this match was just moves definitely wasn’t any sort of insult, Momo and Mayu are really good at what they do and they made this really entertaining.  Mayu especially is basically the female equivalent to Naito and will find a way to land on her neck every chance she can get.  Mayu continues to deliver as world champion and has looked really strong during this run.  ***3/4

The post-match angle almost overshadowed the match with Bea Priestley turning on Momo and joining Oedo Tai.  That’s a good move to even out the factions as QQ was overloaded with top names with AZM, Utami, Bea, and Momo all in it at once.  Oedo Tai was lacking a recognized main eventer and whether fans like it or not Bea is a former world of stardom champion that is booked better than any member of Oedo Tai.  We also saw Sareee appear by video to challenge Mayu to a match for the February 8th Stardom Korakuen Hall show in what should be a Match Of The Year Contender.  Amongst all that chaos Bea also challenged Arisa Hoshiki for her Wonder Of Stardom championship.

This was another good show from Stardom who seem incapable of having a bad trip to Korakuen.  While nothing reached a level of “must watch” there was a lot of very good stuff like the main event and the Tam/Kagetsu match.  This show was very newsworthy with the return of Syuri, Bea joining Oedo Tai and Sareee challenging Mayu as the 1600 fans were certainly treated to an eventful show that is sure to have made some new fans.