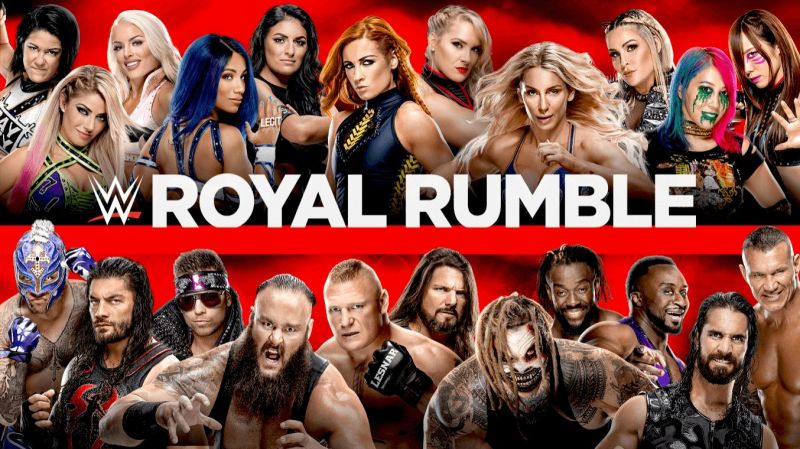 Suit: There will be a running theme throughout this preview on my end, that being that the Raw matches are built up much better than their Smackdown counterparts. Take this match for example. Andrade dropped Dimples Carrillo with a DDT on the concrete a few weeks ago. Andrade then won the US Title and retained it over Rey Mysterio. Carrillo comes back for revenge and now can get the title as well. Simple stuff, and whoever gets the win here has a chance to benefit from it. My only concern is that this match gets shuffled off to the pre-show and gets broken up with commercials, but even then these two can go out there and tear it up. Carrillo’s revenge story falls flat if he loses, so I’ll pick him to win here. Prediction: Humberto Carrillo

Lee Malone: Two years ago on Royal Rumble weekend Andrade had one of the best matches in WWE history. He would also make a surprise appearance in that years Rumble match and the future appeared incredibly bright for the former La Sombra. Fast forward to 2020 and in spite of a great couple of matches opposite Rey Mysterio on Smackdown in early 2019, it wasn’t until very recently that Andrade began to be featured in a prominent position. Carrillo and Andrade have been feuding for a while now but with Mysterio vanquished on Raw now seems the ideal time to get fully behind Andrade and position him for a big-time program come WrestleMania Prediction: Andrade

Suit: There is a decent story here with both heat and personal stakes, after the heel got in the face of Lacey’s daughter. The problem is that Sasha Banks is that heel. The match they built to is Lacey vs. Sasha, even holding off on that match after advertising it for two straight Smackdowns. (Isn’t that false advertising?) Bayley has just been is an interested third party, yet she’s the one with the title and the PPV match. Weird build aside, Lacey was far from ready for the main roster when she got called up, and despite her main event run last year, she still has some work to do before reaching the upper crust of the women’s division. Your Mean Aunt Pam retains. Prediction: Bayley

Lee Malone:  Lacey Evans as a face is not something I ever thought would work but it has been actually good. A short transitional reign for Evans to get the belt from Bayley to Sasha Banks heading into ‘Mania would make sense as Sasha is the star of the former Boss ‘N’ Hug Connection. Bayley has just been a bit-part player in the Banks Evans feud but losing the belt could prove to provide even more motivation (both storyline and reality) for Bayley to step up another level and she can have the consolation prize of the Moolah Battle Royal at WrestleMania Prediction: Lacey Evans

Lee Malone: “Ha ha that’s some real good shit pal” Vince McMahons reaction every time somebody on the writing team puts forward a story about one guy being tall and another guy being short. We have seen this a thousand times. Shorty G is Crash Holly/Spike Dudley/Rey Mysterio and so on. Sheamus looks like he hasn’t aged in 10 years but looks can be deceiving. It was rumored that The Fella (awful nickname) was near retirement due to neck issues so giving him a singles push would seem ill-advised but hey this is the safe company Prediction: Sheamus

Suit: Baron Corbin. This guy has been given almost every accolade you can give a guy to make people care about him (King of the Ring, Andre The Giant Battle Royal, GM/bad guy in charge gimmick, undefeated streak in NXT), and he’s the same basic stiff you can find anywhere in wrestling. There’s nothing special about him. His work is basic and tedious, he doesn’t have any type of superstar charisma, and his look isn’t anything special. His continued push boggles the mind, especially after he was blamed on-screen for Raw’s ratings tanking after his last big push! I think Corbin’s goon squad will help him win this match, only to get overcome over the top rope later in the night. Prediction: King Corbin

Lee Malone:  The Alliance to Destroy Roman-Mania has been so bad. Who in 2020 could honestly give a single fuck about Baron Corbin, Dolph Ziggler or Bobby Roode? I almost hope Roman destroys all three guys and moves on to the Rumble relatively unscathed. However, we all know he will have to overcome the insurmountable odds and in spite of being beaten down by all three guys and being thrown through a table and hit with a kendo stick and being squashed in trash compactor (may not actually happen) Roman will somehow eek out a victory but his Rumble participation will be in major doubt. Oh the drama Prediction: Roman Reigns

Suit: Now here is something to sink your teeth into. At last year’s Royal Rumble, Asuka beat Becky Lynch to retain the Smackdown Women’s Title. While that win ultimately went nowhere at the time, it’s conveniently come back to matter now after Becky’s failed attempt to capture Asuka’s set of tag titles. Becky can’t beat Asuka, and it’s eating her up that someone has proven to be better than her. What I want is for Asuka to win the title here. That would give Becky a reason to go into the Rumble, win it again, and finally take down Asuka in a marquee match at Wrestlemania. But I have a feeling that WWE will go a different direction, so I’ll say Becky gets her win back here. Prediction: Becky Lynch

Lee Malone :  This story is so simple and yet it’s the best feud in the company. A year ago Becky lost her title clean to Asuka. Becky would go on to win the Women’s Rumble later in the night and main event WrestleMania but she never avenged her loss to Asuka. Fast forward to the closing months of 2019 and Becky alongside Charlotte Flair would fail to beat Asuka and Kairi Sane for the WWE Women’s Tag Team Titles. Asuka has continually got one up on Lynch and maybe just maybe Becky can’t beat Asuka. If this match was happening at Payback or Great Balls of Fire in May and not at the Rumble beginning the run to WrestleMania I could buy Asuka winning. I hope Asuka wins and this feud continues but I can’t see past Lynch retaining and the Womans Rumble winner challenging The Man at WrestleMania Prediction: Becky Lynch

Suit: In an alternate universe, Bryan Danielson is chilling on the Chris Jericho Cruise after taping his match for Dynamite. He’s sipping on goat milk or whatever it is he drinks, thinking of ideas for his match against PAC at the next PPV. He’s enjoying his life, enjoying his art, and still making bank to do what he was born to do. But that’s an alternate universe where he doesn’t re-sign with WWE.

In this universe, Daniel Bryan is trying to figure out how to drag Bray Wyatt’s goofy ass to a respectable World Title match while literally being hamstrung to him. Is it disappointing? Yes. Do I pity him anymore? No. Like Adam Sandler in Uncut Gems, Daniel Bryan had an out. He didn’t take it. And now he gets to watch as a shitty SyFy movie villain touches all four corners of the ring in this grudge match. Hope it was worth it, pal. Prediction: “The Fiend” Bray Wyatt

Lee Malone: I enjoy variety in my wrestling. I try to maintain a positive outlook and see the positive in everything. I gave The Fiend a chance. I tried to see the positive in it. I will now say on the record, The Fiend sucks. This whole feud sucks. I have no sympathy for Daniel Bryan. He knew what was going to happen when he re-signed with WWE. He could have been off in New Japan, AEW, OTT, PWG and countless other places setting the wrestling world on fire. He could have been Jon Moxley. Instead, he is facing The Fiend in a fucking strap match. I hope Bryan enjoys his WrestleMania match against King Corbin. Prediction: The Fiend

Suit: As of press time, there are only five women announced for the Royal Rumble. Perennial favorite Charlotte Flair, multiple-time champions Natalya and Alexa Bliss, Bliss’s partner Nikki Cross, and Skinner-cosplayer Sarah Logan. Not exactly a murderer’s row, but there are 26 other spots. My pick is gonna come out of left field, but let me explain my thinking first. Does anyone have a clear idea of what the Wrestlemania main event is going to be? It could be another Brock match, but does he have a fresh opponent left? And God help us if they main event with The Fiend, the most embarrassing character in wrestling. That leaves me to go a different route. That leaves me to hope for a first time ever singles match. That leaves me to pick the main event we should have gotten last year, but never did. My pick to win the 2020 Women’s Royal Rumble is Ronda Rousey. Prediction: “Rowdy” Ronda Rousey

Lee Malone: WWE have enough good to great female wrestlers under contract that this match could be legitimately great. With only five participants announced that leaves plenty of room for surprise entrants. We will likely see a Lita appearance, we can’t rule out Trish Stratus. My choice to win though is another surprise entrant, Shayna Baszler. In the build to Survivor Series there was a palpable tension between Baszler and Becky Lynch while Bayley felt tacked on to their feud (seeing a trend here with Bayley). They barely scratched the surface of what they could do with that program and a Lynch vs Baszler singles match would feel huge and worthy of WrestleMania. Prediction: Shayna Baszler

Suit: There are a few threads going into this match, most of them coming from the Raw side. There is the odd three-way feud between Randy Orton, AJ Styles, and emerging star Drew McIntyre. There is the feud between Seth Rollins, Buddy Murphy and the AOP against Kevin Owens, Samoa Joe and the Viking Raiders. Roman Reigns has his issues with all of King Corbin’s Court. Otis of Heavy Machinery wants to win so he can bang Mandy Rose (a noble cause). And of course, there is WWE Champion Brock Lesnar entering at #1. Let’s break it down. Brock is not winning. Someone will eliminate him to set up that Mania match. Whoever eliminates Brock won’t win because they already got their match. I think everyone I named on the Raw side will take each other out. Otis is an idiot, so he’ll lose. That leaves Roman and the Corbin goons. Welp. Prediction: Roman Reigns

Lee Malone: The best Royal Rumbles have either a story that runs through the whole match (Flair in 92) or multiple stories with the match broken down into different segments. This years Men’s Rumble feels ideal for the multiple stories/segments method. Lesnar can begin at Number 1 and eliminate a couple of guys before his WrestleMania opponent enters to eliminate Lesnar. Lesnar can then return later in the match to eliminate his future foe. The middle portion of the match can be the Drew McIntyre show and continue what has been a pretty enjoyable renewed push of the Scottish Psychopath over recent weeks on Raw. The closing stretch will be all about Corbin and Reigns once more and Reigns again overcoming the odds. Would anyone be surprised if the final four are Roode, Ziggler, Corbin and Reigns? I know I won’t be. The reaction to Reigns winning the Rumble in 2015 is legendary. While I don’t expect the reception to be as visceral this time around, I can’t see the fans going anything but mild at the thought of Reigns vs The Fiend main eventing WrestleMania Prediction: Roman Reigns 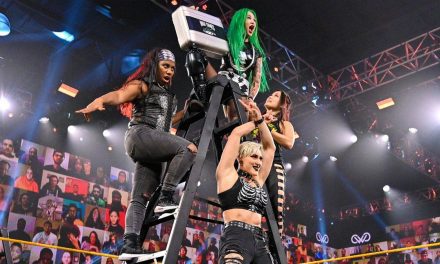 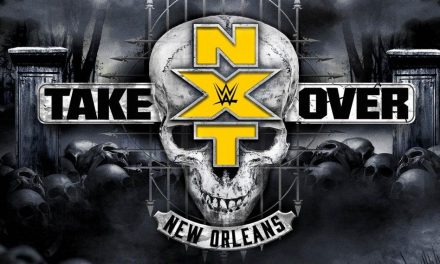