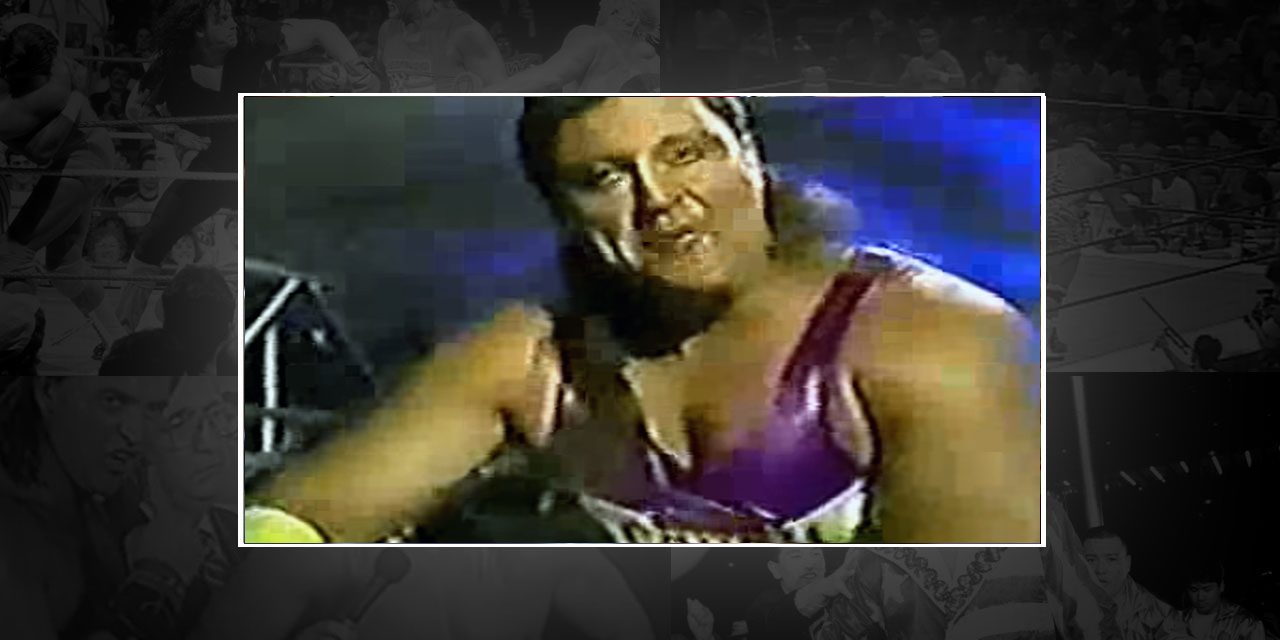 The collection of matches and segments I am watching for this series come from a 1992 Yearbook created by Goodhelmet, a longtime poster at the Death Valley Driver Forum and other wrestling places. A cross-section of the best (and worst of wrestling within a certain year), it is a great snapshot of everything of importance. This article covers footage from April 19-25.

In terms of the in-ring action this week, there are a plethora of matches from Japan, whilst a Saturday brings us a range of different segments, interviews and promos from across some of the US promotions.

Strangely, the first match in this section was from the April 6, but is listed under the April 19. (possible air date).

The Champion Carnival in 1992 was presented as the young contenders challenging the veterans within the promotion and this is what we saw as Toshiaki Kawada took on Stan Hansen. This battle to usurp the standard played out nicely in the opening half of the match as, even though Hansen got the better in some exchanges, it was Kawada who was bossing things against the reigning Triple Crown Champion. This was effectively showcased in a Kawada leglock as kicks meant by Hansen to break the hold just earned him several kicks from Kawada in return. However, the relative youngster might have been regretting that moments later when Hansen powerbombed him at ringside.

This should have signified a turning point, but Kawada still hung in with Hansen, avoiding big elbowdrop attempts and skilfully utilizing his kicks to halt the lumbering monster, before drilling him with an elbow from the apron to the ringside floor. Unfortunately for Kawada, Hansen decided to stop messing around, slamming his opponent twice on the concrete floor. Continuing the tone of unnecessary violence, Hansen held onto a Boston crab as Kawada reached the ropes, much to the chagrin of the fans. An elbow strike gave Kawada false hope, yet a run straight into a lariat almost knocked him out of his boots. A great match which had Kawada looking very good in defeat.

Back to the Top Of Super Juniors over in New Japan and a handcam of Eddy Guerrero taking on Jushin Liger. Liger had already lost to El Samurai in the tournament so couldn’t afford any more losses in his bid to reach the finals. Guerrero’s outfit is…different: a fringed jacket not exactly the coolest of looks. The opening moments showcased that Guerrero can tangle with Liger on the mat if needed as both men traded submissions including a Guerrero sharpshooter and a Liger surfboard. He also had the best of the exchanges as the match began to kick into a higher gear, landing a rana and a kneeling powerbomb as Liger struggled to get a foothold in the contest.

Guerrero nailed a springboard plancha and missile dropkick as the match hit the ten-minute mark, but landed stiffly on Liger’s knees from an attempted splash off the top. Even after this, Guerrero was still close to winning it after a roll-up scored him a two count, but it wasn’t to be. The finish was very unique in my watching of Liger; an attempted headscissors by Guerrero saw Liger block it, kneel down, and squash Guerrero against his knee for the submission. A solid match that had Liger giving Guerrero all the opportunities to make himself look good before stealing the victory almost out of nowhere.

Two days later, we got to see how Liger’s nemesis, El Samurai, found wrestling against Eddy Guerrero. Joined in progress, we, unfortunately, enter just in time to catch Guerrero slipping on an attempted moonsault press but almost immediately slapping Samurai into a half Boston. Samurai soon had control with some submissions of his own, whilst a tilt a whirl backbreaker and spinebuster led to a Samurai dive off of the top rope to the outside. This sparked a flurry of aerial moves as Guerrero sought revenge with a springboard dropkick and plancha in quick succession. There was no water in the pool when Samurai went for a top rope splash moments later, though he was soon able to escape a suplex attempt and win with a German suplex with bridge. What was available is decent, though think it was primarily included as a contrast to the Liger contest.

JWA offered a huge couple of fights on their 25th April Wrestlemarinepiad, starting with Manami Toyota challenging Kyoko Inoue for her IWA Women’s World Title. After a fast start that included a springboard plancha that had me worrying Toyota might slip mid-move, the two women traded submissions, with Inoue’s, in particular, targeting the challenger’s back with some wonderful screaming aggression. Inoue’s range of submissions and throws, such as a modified bow and arrow and a good old fashioned chuck off of the top ropes, were effective in their brutality. Toyota made the mistake when given an opening of going too risky, missing a dropkick that saw her slide through the ropes and leaves her prey to an interesting springboard hip attack by Inoue.

Toyota’s best chances were often when the pace was quickened, landing six dropkicks to briefly turn the tide and launching herself with a dive to the outside later on in the contest. However, the work on the back was telling, as Inoue returned to the mat with submission attempts at multiple points, one, in particular, coming off of Toyota going to the well one too many times with her dropkicks. Towards the end, a wild sequence had Toyota launch herself to the outside three times in succession, ending with an impressive looking moonsault press. Inoue took no prisoners with a stiff superplex and powerbomb, but Toyota was not to be denied as she won the match with the Japanese Ocean Cyclone Suplex. Perhaps overly reliant on certain moves, this was nevertheless a really good title match.

At the top of the card was something that always promised to be a slugfest as Bull Nakano met Aja Kong for Nakano’s WWWA Women’s Title. Nakano’s attempts to throw bombs with Kong early in the contest backfire pretty readily as Kong busted her wide open and dragged her into the crowd for good measure. There was little messing with Kong’s offense as she went for the cut, before landing three successive piledrivers in a show of brute strength. When a reversal of a suplex and two lariats give Nakano a way into the contest, she returned the favor from earlier by bringing Kong into the crowd and nailing her with a chair to cut her open.

There was also little finesse in Nakano’s attacks, ramming Kong’s head into the mat several times and targeting the cut with elbows and kicks. Kong’s desperation leads to her utilizing several can shots to halt the champion once more, before spamming the uraken in a bid to take Nakano completely out of the fight. After kicking out of a top rope legdrop from Nakano, Kong even took to the sky with a dive to the outside! Probably due to tiredness, a few of the later exchanges are somewhat sloppy, but after Kong kicked out of a somersault legdrop, Nakano’s death move, the champion regrouped long enough to land a moonsault to retain her title. A match full of hatred and – according to some reading around I did – a match that was a rare example of Nakano having to wrestle primarily from underneath.

The Saturday of any week always brings a load of action from a variety of different places. Starting with WWF Update, Mean Gene Okerlund spends time reflecting on Wrestlemania VIII. A charity concert with Jimmy Hart and his various accomplices (The Mountie, Nasty Boys, Sensational Sherri), a brunch with various different wrestlers and a lookalike contest are some of the things that took place alongside the PPV as the promotion tried to make Wrestlemania a more rounded experience even at this time.

A vignette for Crush was next up and if this was the first introduction of the gimmick, I’m surprised it didn’t immediately crash and burn. A flashback to his mum telling him to mind his manners as he crushed a carton of milk doesn’t scream new big face wrestler. Neither does the list of wrestlers he talks about – Mountie, Repo Man and Skinner, before Sid Justice gets a mention to at least make Crush seem like he was aiming high.

Speaking of Sid Justice, we get a retort to the Ultimate Warrior interview as Justice joined Mean Gene Okerlund. Justice at this time was so good as the evil heel, shouting whilst staring impassively at all those around him. He needs no friends as everyone fears him, whilst Hulk Hogan is no longer around to save Warrior in return for Wrestlemania VIII. Having got rid of Hogan, Sid promised to make the next Warrior match his last as well.

Over to Memphis where we are shown the clips of a ‘chain on a pole’ contest between Brian Christopher and Tom Prichard. Christopher’s Southern Heavyweight Title is up for grabs and after Eddie Marlin, acting as guest referee, gets bumped, Christopher dumped Prichard crotch first on the top rope to get the chain off of his opponent. Marlin attempted to stop Christopher using the chain due to this move, earning himself a punch in the face in the process. This didn’t keep Marlin down for long though as he got up and nailed Christopher with a chain of his own, counting the pin to give Prichard the title (which was soon vacated due to Marlin’s interference it would seem). Nothing special, whilst the finish of Marlin taking out Christopher doesn’t exactly do wonders for your young heel champion.

Another brief Memphis segment showed the fans watching at home the impact of the Moondog’s attack on Eric Embry. His eyes are bandaged up and within a short promo, he thanks the fans who he had given no reason to offer him any support, whilst talking about praying for his sight to come back. Short, but very effective in this seeming transition from heel to face.

The final two segments were interviews that took in SMW, then WCW. In Smoky Mountain, The Heavenly Bodies gave a pretty generic heel interview (calling the fans poor and ugly as a starting point) in primarily building a feud with the Fantastics.

The WCW one was significantly longer and more interesting as a freshly returned Nikita Koloff spoke to Jim Ross and Bill Fralic on WCW Saturday Night. This was a great segment in terms of Ross questioning to what extent they can believe Koloff after his attacks on Lex Luger and Sting in the past. The power of the Stingers had apparently inspired Koloff enough to the point that he wanted to offer Sting his services against the Dangerous Alliance and Big Van Vader. Koloff isn’t the greatest interview, but the seeds of doubt for Sting’s fans are there, so the segment does its job.

The highlights of this week’s offerings have to be the matches from Wrestlemarinepiad, although once more there is nary a foot going wrong in terms of the action from this year. Join me next week as I continue to explore the best (and worst – it’ll happen at some point!) of the action from 1992 in That Was The Year That Was.