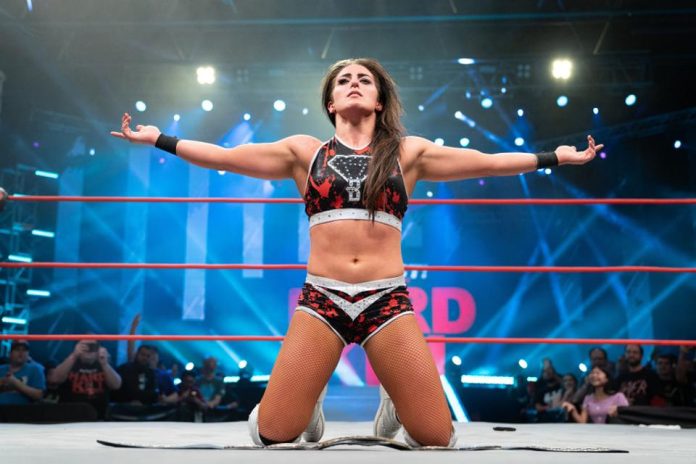 Impact Wrestling returned to pay-per-view for the first time this decade last Sunday when they invaded the Bomb Factory in Dallas for Hard to Kill. In the show’s main event, Sami Callihan put his World title on the line against Tessa Blanchard.

While this was far from perfect, and I still left the match wondering why it needed to be on the PPV, I enjoyed it far more than I anticipated I would. Although it went too long – Ken should not be working matches any longer than five minutes any more – this had the strikes and sloppy grappling that I’d hoped Shamrock’s contest with Moose would have and it did a reasonable job of keeping me engaged. The finish, which saw Fulton seemingly injure his shoulder and verbally submit after being put in a Rings of Saturn, was odd and peculiar from a booking perspective, but on the whole this was decent. **1/2

Ace Austin is different gravy. He and Miguel started off hot and kept up that pace throughout as they delivered the sort of sprint that the X-Division title has been calling for. Both proved a lot about how effective they can make their offence and presence in the ring, but to me Austin came across as such a star. He’s so cerebral in terms of his movement and the little things he does in the ring and at such a young age, he’s the sort of guy Impact can build around long-term. Trey impressed me as well, showing more fire than he ever has before, but you could also see the cogs turning at points in terms of where to go and what to do. A springboard scissors whip from the top rope set Trey up for Austin to hit the fold and secure a successful defence of his title. ***1/2

Disappointment. That’s the only emotion this match evoked in me and that in itself is a sad thing.

I’ve written multiple times recently that the Knockouts division needs a fresh direction after Taya’s year-long and rather stagnant run at the top and that this was the perfect time to achieve that by belting up Grace. Adding in ODB increased the potential for shenanigans, which we did get with the finish, but it also meant that this played up to every standard trope of triple threat matches. Throughout the contest, ODB seemed out of place and not really in a position to keep up with the other two participants – the sort of observation that’s difficult to ignore once it has been made.

Grace and Taya had specific gear for the event, which looked good, and Taya retaining the title again at least indicates that she’s staying but the distraction finish after Grace had hit a Grace Driver on ODB felt cheap and thoroughly underwhelming. **

What on earth was this? One of Van Dam’s girlfriends jumped Cage before the start and they then proceed to have a prolonged beatdown segment on the former World Champion, with the referee stopping it after Van Dam landed a coast to coast and split Cage’s lip after five minutes. ½*

The finish didn’t come off very clearly to the crowd and then Daga came out to kick off another match.

At least these two had what resembled a normal contest, with a Van Dam control segment before Daga mounted a comeback only to get cut off and pinned after a Five Star Frog Splash. However, Rob was already pretty blown up by the time this started and Daga isn’t the sort of guy who can take this to a level beyond what it is. *1/2

If Cage was done with the promotion, just have him eat the pin after a decent match and then move on. Doing the two small matches, while in theory designed to further RVD’s push, had the effect of taking me out of the show. Considering that I had perhaps higher than average expectations for RVD/Cage, this left a poor taste.

While I had no doubt that this would be great, I was a little mystified as to why Impact ran this self-same match on the weekly TV just five days before the PPV. In the end, this was every bit as good as I hoped it’d be as both continued to exhibit excellent chemistry. Elgin’s strikes and power-based offence allows Edwards to come into his own as a valiant babyface who can take a beating, fire back with his own high-octane stuff and keep the crowd engaged.

Over the course of the 20 minutes that these two did battle, Elgin was always positioned as having the edge in each area of the match, be that in the strike exchanges or in terms of the suplexes and slams, but Edwards would always fight back. A Splash Mountain Bomb got Elgin a nearfall and he looked poised to secure the victory after hitting a lariat and a Buckle Bomb, only for Edwards to counter the Elgin Bomb into a sunset flip for the surprise pinfall victory. With that, Edwards keeps his Call Your Shot Trophy for a future title match of his choosing. ****

Of the three ‘legends’ matches on this show, this was the one that arguably enthused me the least heading in. When the dust settled, this actually surpassed my expectations and ended up being decent, if probably two or three minutes too long. Adding in the no disqualification stipulation hid a lot of Rhino’s weaknesses, as did Moose connecting with a big spear at the outset. Rhino had his big moments, powerbombing Moose through a table, landing the superplex off the top and goring Moose and the ref through another table, but Moose got the win after landing a low blow and a second spear of his own. **3/4

Losing Rich Swann to injury possibly changed Impact’s booking direction with this match and also really short-changed them because this, as a two-on-two, was my firm candidate to be match of the night. In the end, Willie Mack still got a chance to really shine and they were able to tell an effective babyface story that maximised the hand they got dealt.

Page and Alexander worked frequent tags and double team manoeuvres to ground Mack, who would regularly fire back with high-impact moves like the exploder suplex, the Samoan Drop/Standing Moonsault combination and flying lariats. Mack kicked out of some of the North’s best stuff, including the double neutraliser, and he looked as though he had Alexander beat with a Six Star Frog Splash, only for Page to pull the referee from the ring. Mack pleaded with him not to disqualify the champions and while Mack got a couple of stunners off, The North eventually finished him with the spinebuster. ***1/4

As awful as this sounds, Tessa Blanchard effectively getting ‘cancelled’ for her reported backstage misdemeanours in the days before this show sure made me more interested about how Impact would book this. The telegraphed story coming in was Tessa winning the title but those stories made it a genuine possibility that Callihan might be the more palatable option for them as champion. Wresting is WILD.

Anyway, these two came out hot and delivered what was arguably the match of the night. Sami hit the Cactus Special within moments of the opening bell, only for Blanchard to kick out and respond with a Magnum for a nearfall.

From there they were able to maintain a great deal of intensity with their strikes and particularly Callihan’s attack on her left leg. I liked the attack on the body part because it separated this match from their previous two contests and it also showed that this had higher stakes and that the oVe leader wanted to send a statement.

This ticked all the boxes of a longer-form world title match, with both competitors kicking out of their opponents finishing manoeuvres and each nearfall getting that little bit closer. Tessa hit a magnum on the apron and a third one in the ring, both for a count of two, while Sami hit another Cactus Special and the shoulderbreaker for two. You had Sami working the leg and coming close to a submission with the STF, while Tessa had some success with the crossface.

The repeated use of the finishers prevented the actual finish from being as telegraphed as it could’ve been and after Sami spat on Tessa for the umpteenth time, she hit two Canadian Destroyers before connecting with the Buzzsaw DDT for the three and a historic victory. ****

While some will object to her title victory and Impact’s decision to run with intergender, this was probably the right booking decision. As always though, the follow up to something like this is vitally important.

The weakest PPV of the Callis/D’Amore era. While they made the best of a raw deal with Swann getting injured last minute and the show had two four-star matches for my money, when half of the card ranges from the disappointing to the downright dismal, it’s hard to leave with a positive view. Tessa’s title win was historic and was my abiding memory of the show but the continual reliance on the old veterans like RVD, Rhino and Shamrock inevitably puts a low ceiling on how good these shows can be. Likewise, the absence of any debuts or significant post-match angles doesn’t help with piquing my interest as the promotion kicks off their new year in earnest.