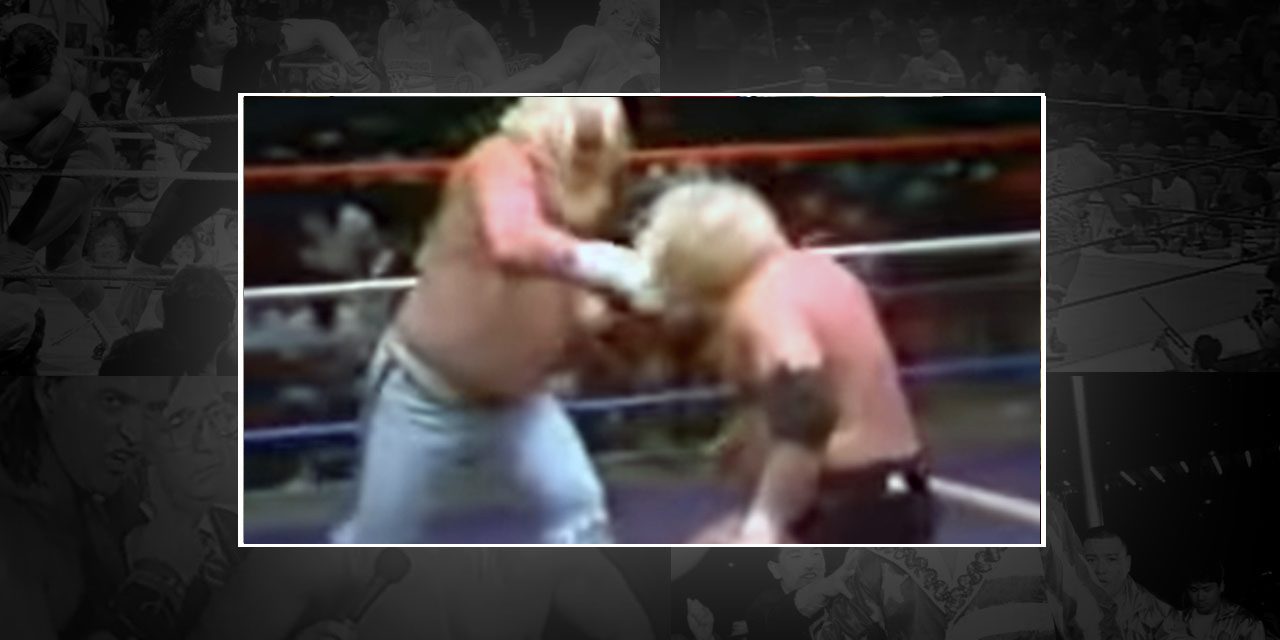 The collection of matches and segments I am watching for this series come from a 1992 Yearbook created by Goodhelmet, a longtime poster at the Death Valley Driver Forum and other wrestling places. A cross-section of the best (and worst of wrestling within a certain year), it is a great snapshot of everything of importance. This article covers footage from April 17-18.

After ending the previous week with some Top of the Super Junior action, it is a rare chance for the mini luchadors to take the spotlight as CMLL saw Octagoncito, Misteriocito and Mascarita Sagrada versus Espectrito, Piratita Morgan and Pequene Pierroth. It took a while for the first exchange in earnest as the rudos and tecnicos tag in and out to get the most advantageous pairing in the ring. Finally, it was Sagrada and Pierroth who got the match underway. Outside of some quickfire aerials from Sagrada, it was Pierroth who maintained control, helped by some bruising interference from Morgan. A mistake by Espectrito in kicking Pierroth allowed the tecnicos a brief window of opportunity, which they took. An impressive dive by Sagrada took out Espectrito at ringside, though it meant missing whatever Octagoncito pinned Pierroth with. Misteriocito used an impressive transition into a victory roll on Morgan to finish the primera caida.

The segunda caida started at a fast clip, with a notable highlight being a botched moonsault press by Octagoncito immediately being forgotten as he nailed Morgan with a superkick. A similar pattern to the primera became the norm as Espectrito bullied Sagrada with ease, only for the masked marvel to up the pace in order to deal with his larger foe. This time, the combined forces of the rudos wrestled control back into their favour, and a Morgan splash on Misteriocito, and combination of moves on Sagrada ending in a Morgan splash on Sagrada ended the segunda caida. A second rope elbowdrop by Espectrito on Octagoncito was purely for show, as was the visual pin.

The momentum was all with the rudos as the tercera caida began with no real sense of it being a tag contest as the rudos stayed in the ring to triple-team each of their opponents. However, they returned to similar outcomes as the primera with the rudos miscommunication costing them as multiple attempts to double team Octagoncito fail. After dives to the outside by Octagoncito and Sagrada, Misteriocito pinned Pierroth with a huracanrana before he saved his partners from a countout or so it seemed to me. A perfectly fine contest, though not really my bag in the grand scheme of things.

A match more interesting on paper than in execution followed as Mitsuhara Misawa, Toshiaki Kawada, Kenta Kobashi and Tsuyoshi Kikuchi took on Jumbo Tsuruta, Rusher Kimura, Masa Fuchi and Yoshinari Ogawa in a match that saw only two men for each time down at ringside at any one time. This wasn’t full elimination as you only needed to pin three opponents to end the contest. The best action came in the earliest ‘match’ as Kobashi and Kikuchi met Fuchi and Ogawa, with a lot of needle between Kikuchi and Ogawa in particular. Fuchi and Ogawa went out of their way to bend Kikuchi out of shape, whilst a sequence of reversals allowed Ogawa to nail Kikuchi with a brutal backdrop driver for the first elimination.

The dynamic of the new man was interesting as it added a fresh spark every time an elimination took place, but things began to feel more disjointed and (in the end) overly long as this occurred. The next two falls saw the younger team take control, Kobashi taking Ogawa out with a moonsault and Fuchi eventually falling to a modified headlock by Misawa having kicked out of after a Kobashi rolling prawn hold. Between the falls, it was often Misawa and Kobashi fighting from underneath, especially with Tsuruta the next man down after Ogawa, but they were able to find a way to two eliminations.

The star of the contest was Kobashi who lasted almost an hour before meeting his comeuppance at the hands, knees and boot of Tsuruta, though it was a Kimura headbutt that set up the first of two Jumbo Drivers for the elimination. Kimura, the elder statesman of the contest, wasn’t offering much by the time of the final fall outside of a way to see Tsuruta escape with a loss but without taking a pinfall. He duly completes his duty when Kawada slapped on a stretch plum as Misawa kept Tsuruta occupied with a submission of his own. An interesting match with good bits in it, but at over an hour long, it felt like diminishing returns.

Ric Flair was a very busy man in 1992. Not only was he winning Rumbles, headlining WrestleManias and touring Europe, but he also popped up in SWS to take on Genichiro Tenryu on the April 18. To add some more to his workload that evening, the match was fought under two out of three falls stipulations. The two men had wrestled four times before: twice in 1981, once in 1984 and once the previous night as Flair held a 3-1 record over Tenryu including a win in their most recent contest. With this in mind, it was Flair who dominated the early exchanges in the first fall, attacking the arm and halting attempts by Tenryu to build momentum. A kneebreaker on the guardrail was the prelude to some figure four leglock work (with judicious use of ropes) that resulted in a pinfall.

This was all about Tenryu overcoming the odds. A knee injury and a deficit against an opponent who beat you just the other night was a mountain to climb to win. Even with Flair attacking the knee from the open of the second fall, three enziguris and a powerbomb eventually evened the contest up at one apiece. An escalation in the leg assault – chairshots with Tenryu’s leg wrapped around the ring post – only served to further emphasise the lengths Tenryu needed to go to in order to win. They played effectively off of the first fall with an epic struggle over Flair’s figure four, whilst Tenryu managed to shrug off Flair’s chops, use judo palm thrusts, three clothslines, an enziguri and a powerbomb to finish things off. A good match, but not a great match.

After a short clip that promoted the WWF Fan Club, a group of children in face paint are there to herald the arrival of the Ultimate Warrior. This is to celebrate the return of the Warrior as we see clips of some of the action from Wrestlemania, whilst the focus of his words are on his friendship with Hogan and how Sid Justice will pay the ultimate price for his poor treatment of the Hulkster. This was more legible than most Warrior promos, yet all the more boring because of it. It is also very noticeable how small he is; it isn’t surprising people doubted it was really him when he ran in at Wrestlemania.

The ongoing Jerry Lawler, Jeff Jarrett and friends’ feud with the Moondogs continued with Eric Embry taking the role of tag team partner in a six-man at the Mid-South Coliseum. Clips of the match are shown, with notable spots including Embry swinging for the fence with a kendo stick as one of the Moondogs wore a trash can. Richard Lee partnered his Moondogs in this match and gets pinned following a collision with one of his own men, the Moondogs unable to take advantage of Embry mistakenly waffling Jarrett with a trash can. This was all about the post-match though as a steaming cup of something (apparently battery acid) was brought to the ringside and chucked in Embry’s eyes, leaving him squealing on the ringside floor.

This segues into an interview with Eddie Marlin, Jarrett and Lawler. I appreciate the initial stages of this interview as Marlin explained that the injuries caused to the Moondogs in recent weeks is the reason why he can’t fire the Moondogs as he doesn’t want to indulge in double standards. Lawler spends his time reminding people what happened when they tried to fire Terry Funk: Funk’s lawyer threatened Marlin with a million-dollar lawsuit. From there, we get the standard face patter from Lawler and Jarrett as they promise that – even though it has taken longer than they expected – they will get rid of the Moondogs.

Later on in the same show, a campfire and a full moon are the backdrop for the arrival of the Moondog Hunter, Charlie Trapper. This was a man who had apparently hunted Moondogs for a long time and he was coming to Memphis to do the same. That I can’t find any information about him in a quick look around the internet suggests that he wasn’t exactly successful, but I guess we shall see.

The Memphis action finished with another Jerry Lawler and Jerry Jarrett interview. Jarrett opened up the interview reliving the actions at the Coliseum as the Moondogs had originally targeted him with the acid. This allowed him to talk about how his father almost lost all of his sight, meaning the attack registered a little too close to home. During the course of the interview, it was revealed that the match at the Coliseum was going to be a cage match, something that Lawler fixated on in his time on the mic, as well as the involvement of Charlie Trapper as their partner. I get that they need to add little elements to extend the feud, but this doesn’t exactly have the same level of interest as the acid attack on Embry.

The time in Smoky Mountain Wrestling this week is short as it entailed just a Heavenly Bodies interview alongside Jim Cornette. Admittedly, it did also afford me a chance to see Tim Horner and Joey Maggs give some of the blandest face promos I’ve ever seen before Cornette was allowed to retort, so it was worth it. To be fair, this was all about Stan Lane as he complained about the sexual harassment that they had been experiencing ever since they turned up into the territory. It’s fairly cheap heat, but I enjoyed it.

The final two segments of this week’s article are on WCW Saturday Night. The WCW World Heavyweight Champion, Sting, turned up to chat with Dusty Rhodes and Jim Ross and unfortunately, it just further highlighted how talking was never Sting’s strongest suit. The fan reaction for him is unarguable though. Between the champion and Rhodes, the focus was on a future match with Vader. In an odd ending, Sting stands up to celebrate, though then made a big deal about sitting back down again, almost as if someone had a word with him from off set. All of this felt somewhat awkward.

We end on a high as we get clips of the Freebirds in concert at the Omni. The Freebirds are way past their sell-by date at this point, yet WCW still continues to try at least. The best/worst thing about this is Jimmy Garvin’s singing; Michael Hayes can at least somewhat hold a tune, but Garvin was awful.

I left last week promising some Top of the Super Junior action, not foreseeing a 72 minute All Japan match in my future. A lot of interesting, if not always exceptional, action this week, with next week seeing a definite return to the New Japan ring on That Was The Year That Was.