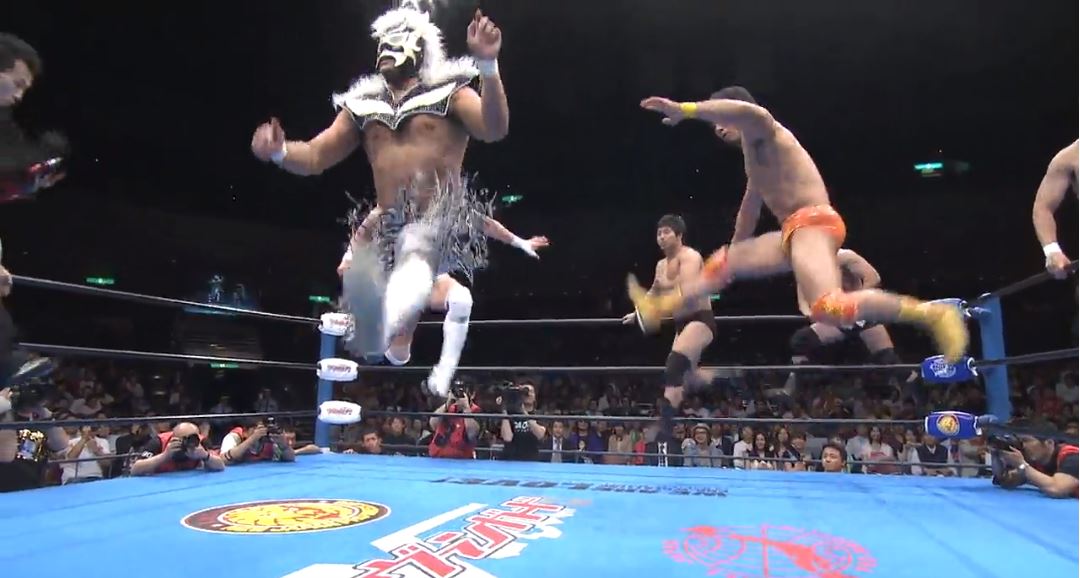 Welcome back everyone to the Lion’s Vault, your one-stop-shop for a trip into NJPW World’s archive of historic matches. Since we last broke bread together we have said goodbye to a true wrestling legend, as Jushin Thunder Liger wrestled the final two matches of his career at Wrestle Kingdom and had his memorable retirement ceremony the next night at New Year’s Dash. With Liger officially being done it is time for us to wrap up our own small tribute to the man’s career, by taking a look back at two more matches involving participants from his January 4 retirement match, and then just for giggles we will also check out our second straight Different Style Fight. 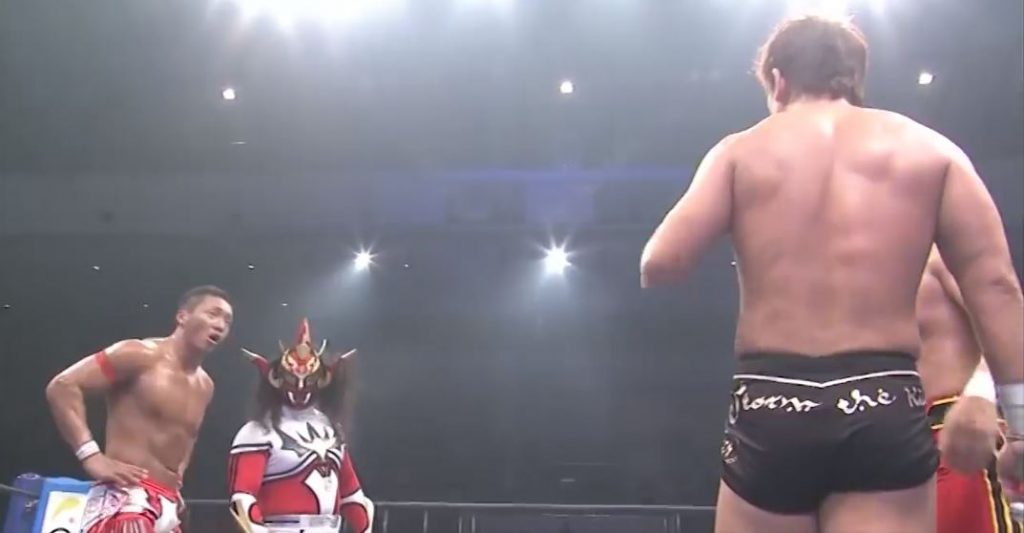 Spoiler Free Teaser: A rather basic, but fun tag match featuring a number of influential junior heavyweights, including CIMA making a rare stop in New Japan. While not a must watch, Kanemoto and CIMA had a number of fun exchanges that make you wish they had more opportunities to face each other in the ring. ***

While I selected this match for our Liger tribute for the inclusion of a Tiger Mask IV match, the real motivation for its inclusion is the presence of another Liger rival and total badass, Koji Kanemoto. As an extra bonus we are also treated to a rare New Japan appearance from Dragon Gate legend CIMA, in one of his only three matches in the company, and the only one currently available on NJPW World.

The match begins with a perfunctory Liger and Tiger Mask grappling exchange, but luckily soon picks up when Kanemoto gets involved by bossing the match with a strike heavy offense. Eventually Liger and CIMA tire of getting their asses kicked, and change up their game plan and start targeting Kanemoto’s leg in order to turn the tide. As the action continues all four men are given opportunities to shine during the first half of the match, but truth be told it is really only the Kanemoto and CIMA exchanges that stand out. Part of the problem is that the match is slower-paced than I would expect from the men involved/the card positioning, and as a result the crowd is relatively quiet…or at least they were until CIMA begins to bust out some of his trademark moves during the second half of the match. Now with the audience more invested, we enter a pretty damn good finishing sequence with everyone getting their moves in and Kanemoto coming close to putting Liger away multiple times. Eventually, a series of nearfalls leads to Liger catching Kanemoto with the Crash Thunder Buster in the middle of the ring to earn his team the victory. Post-match CIMA and Kanemoto exchange more heated words, before the winning team takes the mic and addresses the audience…and I’m left wishing for Chris Charlton so that I can understand what they’re saying.

Match Rating *** – A good, but definitely not great, match between four Japanese junior heavyweight legends. While the match action picked up during the second half, it still felt like it never approached the high gear that you would expect from these competitors on a fairly major show. That said, it is always fun to watch Kanemoto and Liger go after each other, and CIMA came off as a superstar. With the benefit of hindsight, perhaps the most negative aspect of the match is that it ended up feeling like an appetizer for a bigger Kanemoto/CIMA encounter down the road that unfortunately never happened. 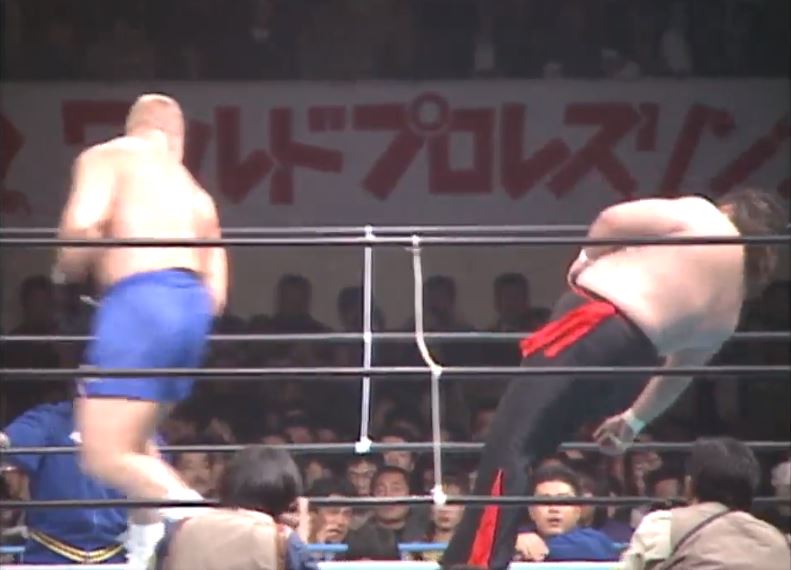 Spoiler Free Teaser: Hey its Shinya Hashimoto looking pretty awesome and Tony Halme being Tony Halme. The match is presented as Strong Style wrestling versus boxing, and the result is a rather boring couple of rounds that luckily is followed up by a pretty exciting concluding round. Enjoyable if you are into the styles of matches, but otherwise quite skippable. **¾

After the surprisingly fun Inoki vs. “Monster Man” Everett bout that we covered in our previous edition of The Lion’s Vault, I thought it would be fun to take a look at another Different Style Fight. This time we have New Japan legend in Shinya Hashimoto taking on a green Tony Halme. In fact, coming into the match Halme only had a handful of wrestling matches with a small number of squashes in the Herb Abrams version of UWF in addition to a couple of previous Different Style Fights in New Japan, including a previous victory over Hashimoto.

Based on his legit amateur boxing background, Halme is presented a pure boxer for this bout, while Hashimoto has more of an MMA approach as he combines striking, grappling, and submissions. Once again the match is broken down into three-minute rounds, and both men have cornermen to help them during the round breaks. As for the bout itself, the story is pretty straightforward as Halme looks to keep Hashimoto off-balance with jabs while looking for openings to land his power shots. On the other hand Hash is happy to mix in his own strikes in order to keep Halme on his toes, but for the most part wants to get things on the mat where Halme looks like a fish out of water. The story works in theory, but unfortunately, Halme’s punches (which in a match like this is his entire offense) really don’t look that great as the combinations aren’t that interesting and look pulled/obviously light in the context of the match.

The highlight of the first couple of rounds is probably Hash targeting Halme’s arms with a couple of submission attempts, but otherwise there isn’t a whole lot to write home about. Luckily the third round starts with some more fire, as Hash nails Halme with a series of low kicks that hobble him, and then follows with a nice high kick that sends him crashing to the mat. Hash follows up with a belly-to-belly suplex and then once Halme regains his feet he goes for the kill, which ultimately proved to be his undoing as Halme counters another kick attempt with a left hook that puts Hash on rubber legs, and then an (illegal?) elbow followed by a punch combination ends with a right hook then sends Hash to the mat and earns Halme another KO victory.

Match Rating **¾ – After a couple of pedestrian at best rounds, this match was somewhat saved by the final round which actually had some really fun action leading up to the knockout. Still, the match was much less fun than Inoki vs. Everette, and I think that is largely due to boxing not translating as well to professional wrestling as other combat sports (not that it can’t be done). Also, I am not fully sure why a standing elbow would be illegal in a match like this, but Chono and Mutoh were adamant about it both during and after the match to the ref. Not much else to say other than Hashimoto still came off as a star in this odd type of environment, and luckily for him he would get his revenge on Halme later in the year. 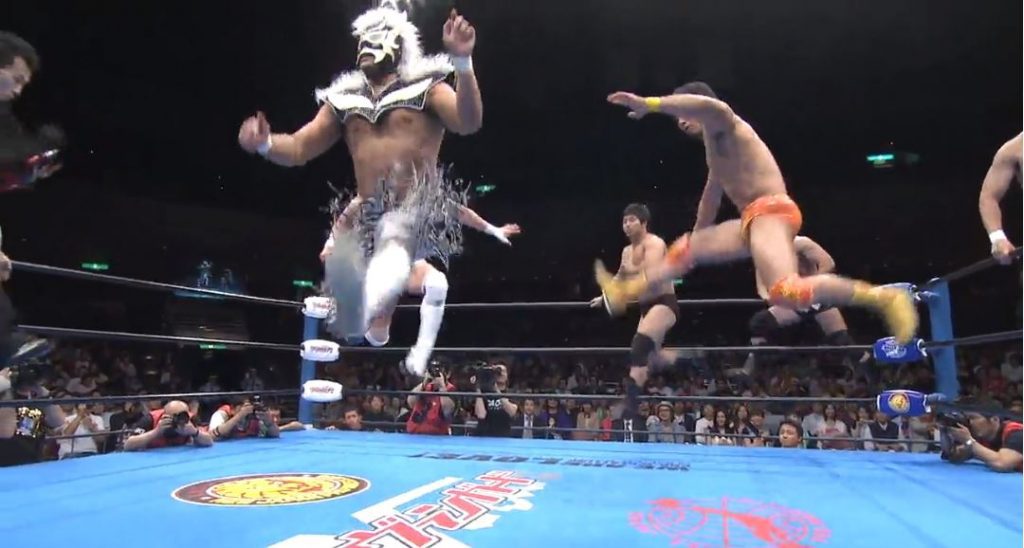 Spoiler Free Teaser: A fun and amusing juniors tag match featuring wrestlers from NJPW and AJPW that is a mixture of high spots and some light comedy. Everything is well executed in front of an adoring crowd, and the match is wrapped up before it overstays its welcome. ***¼

From the 40th anniversary joint show for All Japan Pro-Wrestling and New Japan Pro-Wrestling, we get an early card, lighthearted ten man tag match. Instead of breaking down the teams by home promotion, we go with masks vs. no masks as we have the colorful troupe of Jushin Thunder Liger, Tiger Mask IV, BUSHI, SUSHI, and Shiryu (the latter being Kaz Hayashi under his old Michinoku Pro Wrestling mask) taking on the much more boring looking Apollo 55 teammates Prince Devitt and Ryusuke Taguchi, Hayashi trainees Hiroshi Yamato and Kai, and a pre-excursion Hiromu Takahashi.

Things start off with a series of nice one on one encounters as everyone pairs off and gets their own turn in the ring. The action continues in this civil fashion until a series of miscommunications leads to Hiromu getting chopped multiple times by his own teammates. More light comedy and lucha inspired spots follow before an extended heat sequence on SUSHI. While this type of match might not be everyone’s cup of tea, but the crowd is definitely going along for the ride. Once SUSHI finally escapes we get BUSHI and Hiromu squaring off in a battle of future LIJ teammates. The two have a pretty fun exchange (hey, perhaps their chemistry would be better served as a tag team one day), which then gives way to the end of the match schmozz which includes Apollo 55 and Liger & Tiger Mask squaring off in the ring and dives to the outside for everyone. During the chaos BUSHI and Hiromu find themselves alone in the ring, and one BUSHI Firebird Splash later gives the victory to Team Mask.

Match Rating ***¼ – A definite step above your usual early card multiman tag matches, as it was worked at a good pace and had a number of fun wrinkles, including leaning on the existing relationships between a number of the wrestlers and some light comedy spots to differentiate it from other matches on the card. While this match would never be included on any “Best of Liger” compilation, these types of matches dominated the latter years of Liger’s career, and so I am glad that we were able to include a fun match like this in our tribute that included AJPW and also focused on the Liger/Tiger Mask vs. Apollo 55 rivalry.

Thank you, everyone, for joining us for another trip down memory lane. While we did not have any epic matches this time around, all of them had a fun element to them, and I must say that it has been an absolute blast looking back at Liger’s career through the lens of the participants in his January 4th retirement match. For those interested the full Liger Tribute playlist (along with every match we have reviewed and other playlists) can be found in our Guide to the Lions Vault. Until next time, peace and happy wrestling watching to you all! 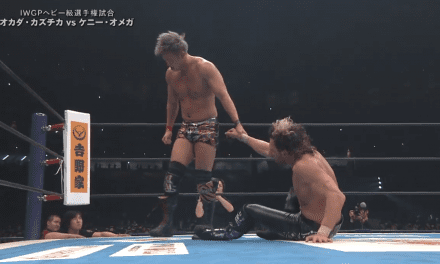