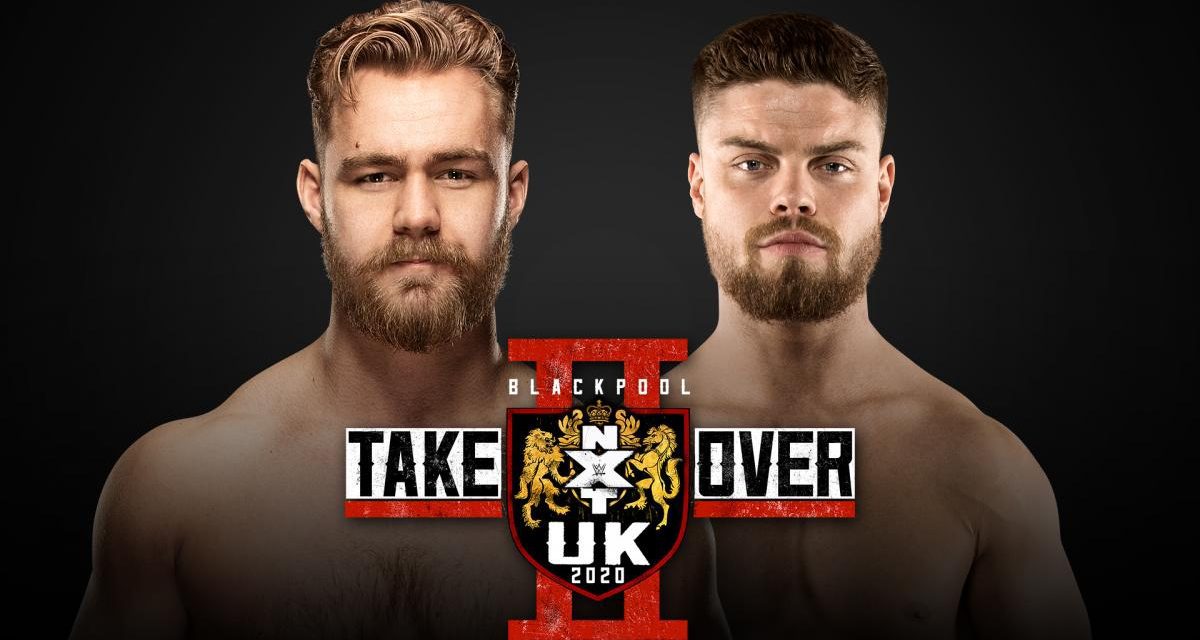 (Note: this article is for entertainment purposes only)

NXT UK, despite what you may (or may not) hear, is (a) a real promotion, and (b) a solid show. I have watched every episode, even that weird span where they had so many shows in the can that they aired two a week (surely a first in wrestling history). The roster is good, the booking is straightforward, and the wrestling is mostly solid with some main events you could classify as excellent.

But the show also has its flaws – it can be extremely dry if not outright boring at times, and they have an inexplicable fascination with pushing the Gallus stable and Joseph Connors. The biggest problem, though, is what the show represents. Remember the incredibly vibrant British scene a few years back? Well, the WWE moved in, razed the territory, and put up an Applebees in its place. Independent groups have been going out of business left and right, and WWE goes back and forth on who is allowed to work where, meaning less opportunity to see wrestlers (Cagematch has Tyler Bate working 42 matches in 2019; he worked 107 matches in 2018 and 112 in 2017). No one is as good in NXT UK as they are out of it. Poor WALTER is essentially the same wrestler but roughly 25% as effective, although to be fair I don’t remember wXw ever having him getting pinned by Drew McIntyre in three minutes. Other WWE programs may depress you, but NXT UK has sadness built into its DNA.

The brand has its third TakeOver event on Sunday. The first one was actually a solid event, with a very good tag match between Moustache Mountain and the Grizzled Young Vets and surprise appearances by Finn Balor and WALTER. But all anyone really remembers if the Pete Dunne/Joe Coffey main event that went an interminable THIRTY-FOUR minutes. The second Takeover had a fantastic Walter vs. Tyler Bate main event and a fun undercard but was overshadowed by occurring the same day as All Out and New Japan’s Royal Quest in London. No one is really buzzing about this Takeover, so let’s have some fun and lay down some fake odds. 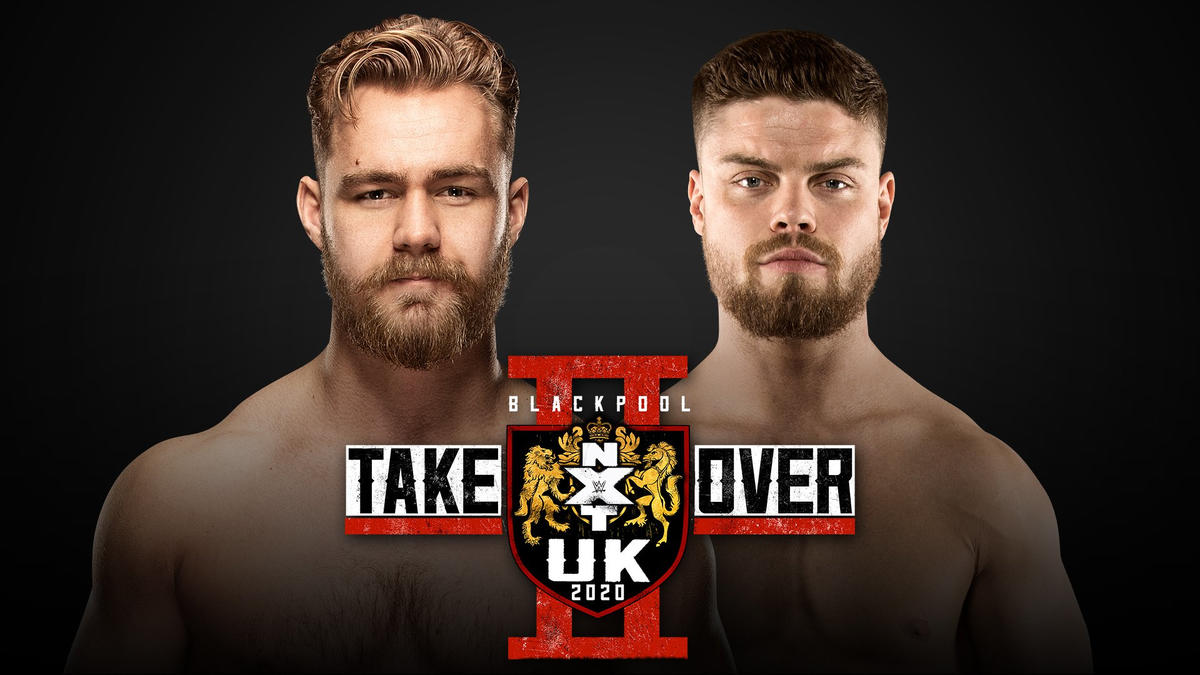 Background: Devlin has been agitated at his lack of opportunities and was specifically resentful of Tyler Bate being given a title shot at the last UK TakeOver. He did some genuinely amusing presentations proclaiming his superiority and beat Bate’s protégé A-Kid. After some failed interference from Devlin during a match between Bate and Noam Dar, a match for Takeover was made.

Projected match quality: Given time and a hot crowd (and both seem likely) this should be excellent and could justify this Takeover on its own.

Who will win: Devlin has arguably been the MVP of the brand and seems to be building to a title match with Walter, while Bate has been treading water and already had his title match at the last Takeover. I’d have Devlin as the solid favorite. 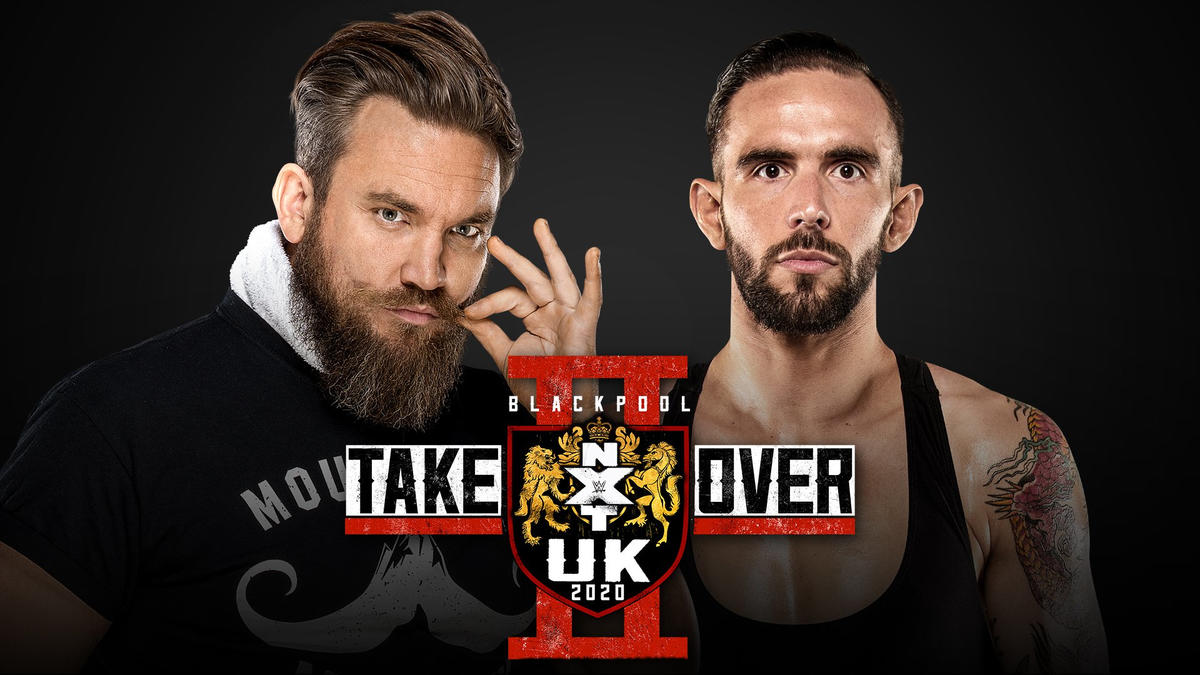 Background: Dennis has been out of action for months after surgery for a pec injury. He made his return in an odd way – Seven was shaking hands with the fans after a match, and Dennis was in the crowd, grabbed Seven’s hand and refused to let go. Later, before Seven’s match with Michael May, Dennis attacked May prematch. When Seven asked Dennis what the hell was happening, Dennis hit him with the microphone. So, um, they made a match.

Projected match quality: Seven has done strong work on the brand, but this match could be an uphill battle. If they have an intense brawl this could surprise, but I’m not betting on it.

Who will win: Dennis is just coming back so he seems to be the strong favorite, and Seven won’t lose much with a loss. I can’t rule out a DQ win for Seven though. 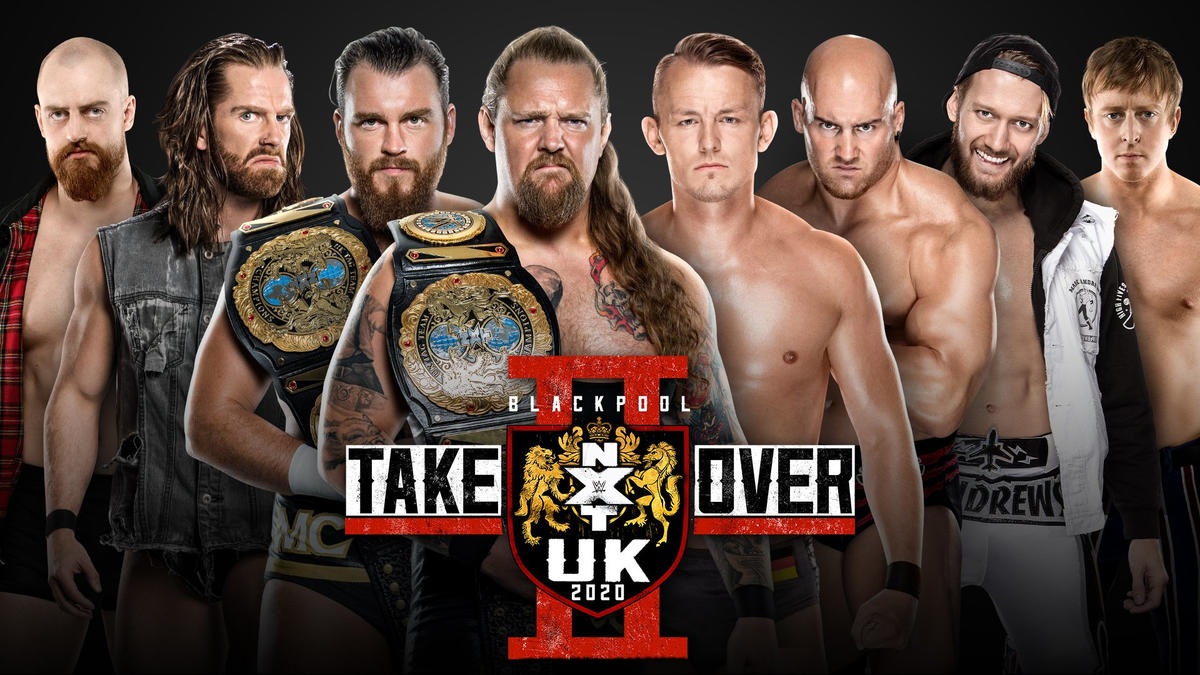 Background: Webster & Andrews won the tag titles at the last Takeover in a three way but lost them in quick fashion to Wolfgang & Mark Coffey). When Gallus defended them against the Imperium contingent of Aichner & Barthel, the GYVs ran down to steal the belts, and then Webster & Andrews got involved leading to a four-team brawl and this match.

Projected match quality: Probably very good. The match is filled with guys you would not expect to thrive in a ladder match, but last year we had an excellent four-way ladder match at a Takeover that prominently featured the Forgotten Sons. I would imagine maximum effort from everyone here. 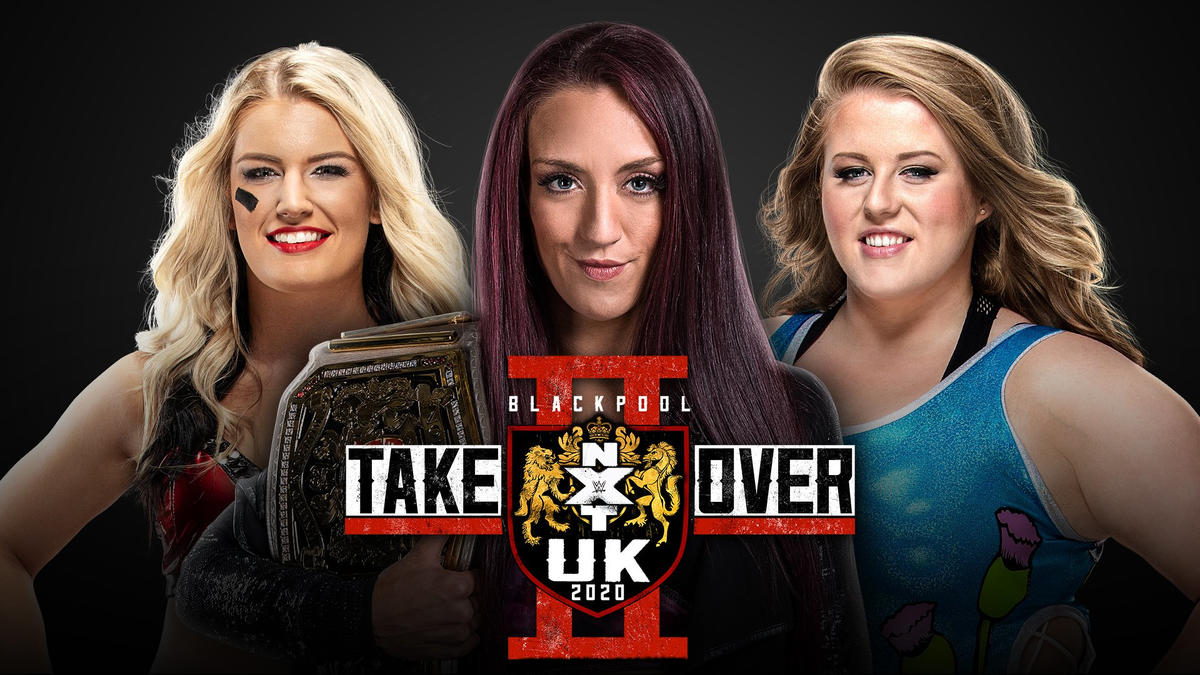 Background: Ray beat Storm for the title at the last UK Takeover, and Toni vanished for months afterward. In her absence, Niven started climbing the rankings, including scoring a big win over Jazzy Gabbert to win that feud. When it seemed like she was going to get a title shot, Storm reappeared and wanted her belt back. The two friends argued over who deserved the spot and even came to blows, and the inevitable three way was made.

Projected match quality: Everyone here is talented, but three ways can be a challenge. I expect it to be good, but a one on one match between any two out of the three would probably be better.

Who will win: It feels too soon to go right back to Toni, and I get the sense that if they wanted to coronate Niven, they would just have had a singles match. A three-way seems ripe to have Ray retain via shenanigans. 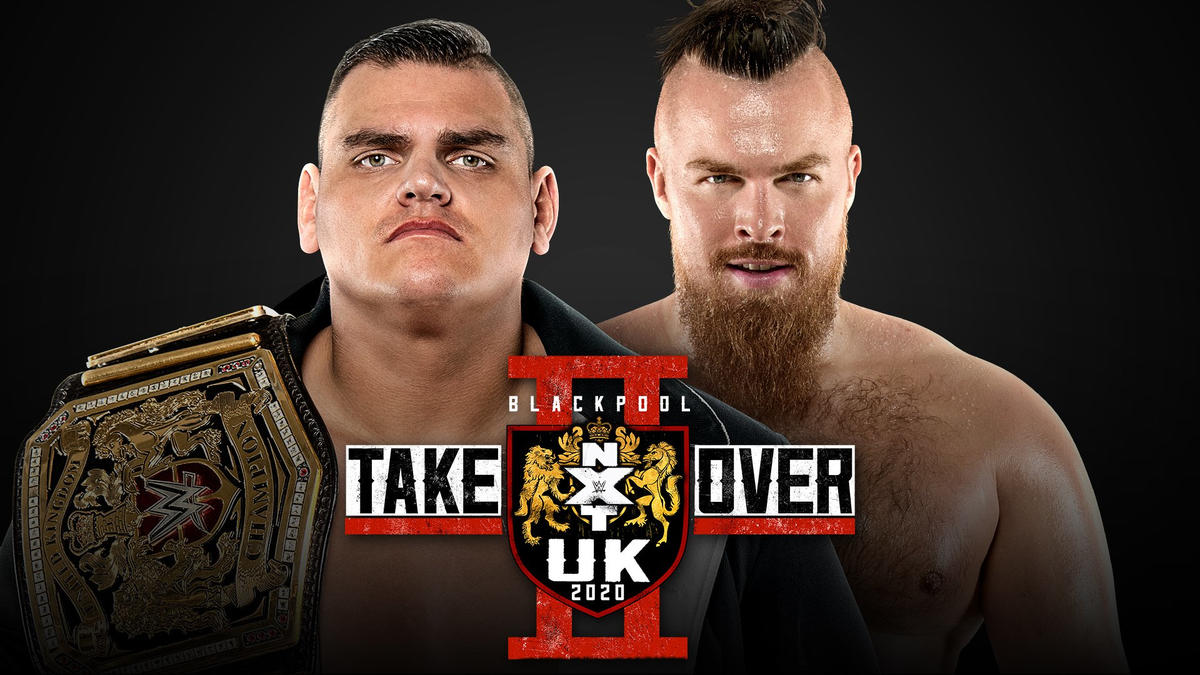 Background: This one actually started at the very first Takeover, when Walter made his debut after the Pete Dunne/Joe Coffey match and laid Coffey out. The last few months have seen the Imperium and Gallus promotions going at it, and a title match was negotiated.

Projected Match Quality: Depends on how long it goes. NXT UK Takeover main events have averaged 38 minutes in length, if they come close to that it’ll be tough sledding. If they kept the match short and intense it could be good, but I fear they are going to shoot for another epic.

Who Will Win: As pushed as Coffey is, I have a hard time imaging him as the champion, but I also would have had a hard time imagining him headlining two of these Takeovers. I think Walter retains, and the second most likely outcome is a no-contest (see below).

Will there be an NXT run-in?

The Worlds Collide show is fast approaching, and an invasion from the US branch of NXT would add some spice to the buildup. It would also allow a non-finish in the main event. But there’s also been no hint at anything at this point either.

I could see the tag titles changing hands, but you would only need one more title change to hit the over

You would think 30 minutes would be a safe bet, but you would have also thought Pete Dunne and Joe Coffey wouldn’t go 34 minutes.

The Devlin/Bate should be excellent, but the rest is a tossup. All four of the other matches could disappoint or exceed expectations. I’m leaning towards this being a pretty good show, but I would not put money on it. 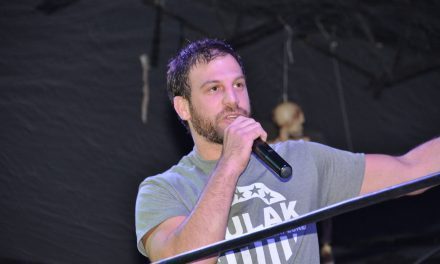 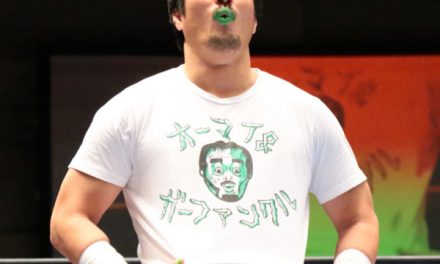