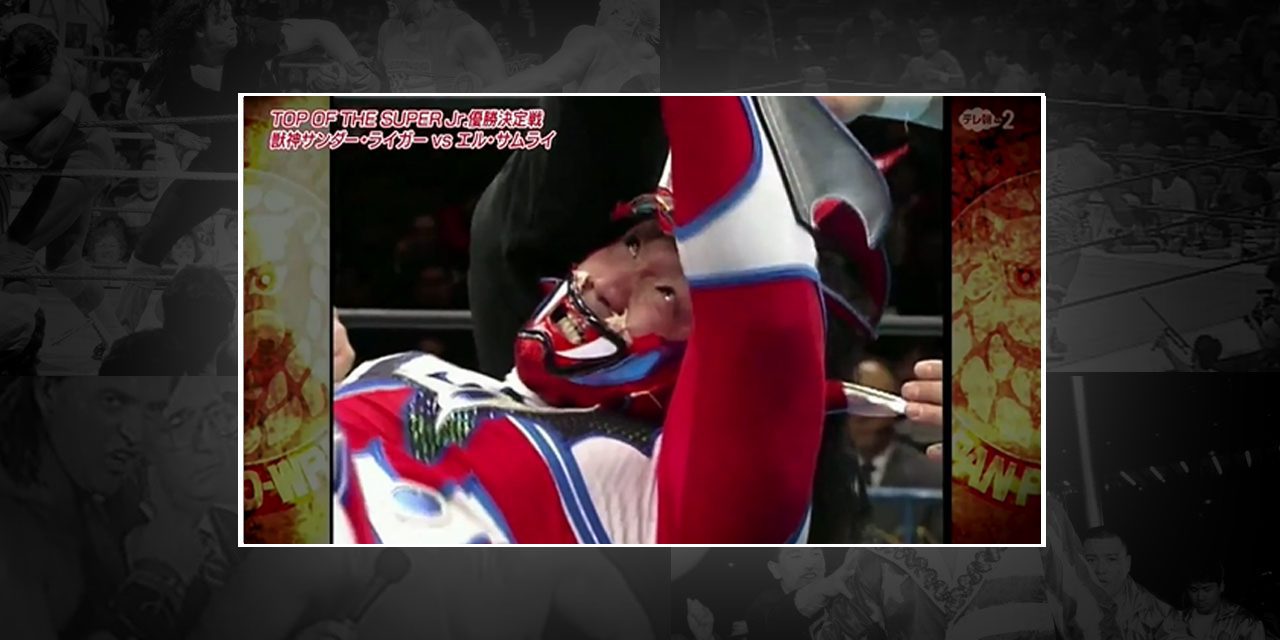 The collection of matches and segments I am watching for this series come from a 1992 Yearbook created by Goodhelmet, a longtime poster at the Death Valley Driver Forum and other wrestling places. A cross-section of the best (and worst of wrestling within a certain year), it is a great snapshot of everything of importance. This article covers footage from April 11-16.

After a couple of weeks absence due to holidays, That Was The Year That Was returns as we head into the post-WrestleMania window of time in 1992. With no Hulk Hogan, a returning Ultimate Warrior, and no seeming end just yet to the Ric Flair/Randy Savage feud, things are definitely interesting as we move towards the mid-year.

However, there are other promotions out there and the first action post-PPV is from Smoky Mountain Wrestling. With the SMW Heavyweight Title up for grabs in an upcoming tournament, Hector Guerrero, Dixie Dynamite and Paul Orndorff are all talking to Bob Caudle about being wildcards for said contest. Whilst Guerrero and Dynamite are just happy to be there, Orndorff is unsurprisingly unimpressed. He listed off opponents he had beaten – Flair and Hogan in particular – before his badmouthing of the other two leads to an impromptu contest against Guerrero which was also apparently a tournament match.

The overarching storyline here is Orndorff being disgruntled not only about the wildcard spot, but about Bob Armstrong banning the piledriver. After some pre-match casual racism (‘Do you know what arriba means? It means swim a little faster, the border guards are coming’), Orndorff was initially frustrated as Guerrero out-wrestled him at every turn. A punch as the referee was blindsided by trying to split them up in the corner led to a methodical heel beatdown, before a missed dropkick by Orndorff gave Guerrero life in the contest. Unfortunately for him, a crossbody is rolled through by Orndorff for the three count (a handful of tights once again missed by the unsighted referee).  This all felt mainly about building to the post-match as Orndorff hits a piledriver on Guerrero, as well as three other jobbers (Reno Riggins and Joey Maggs included). This whole set-up feels very 80s territorial – a banned move angle – but it is enjoyable for what it is.

On the same show, we finally get the big reveal of the Heavenly Bodies as they enter the first round of the SMW Tag Team Title Tournament. This is the Tom Prichard and Stan Lane version of the Bodies and this relatively brief television contest was a good way to introduce them to the audience. This set out to establish two things: that the Bodies are bad guys, and that the Bodies are a good tag team. Both are achieved as Prichard and Lane both initially out-wrestle the Batten Twins, whilst a handful of hair by Lane from the apron halts a Batten charge, even though the spot itself was poorly executed. Chokes, missed pinfalls by the official and a double team finisher (a back body drop into a suplex) that was possible due to the official again being out of position are heel 101 tropes, but they do the job they need to do as the Bodies progress to the next round.

Post-Wrestlemania, the WWF headed off on a European tour as, just like today, things never really stopped moving. Just over a week after Wrestlemania, the promotion was in London so it was a perfect opportunity to spotlight the British Bulldog as he took on Ric Flair. The quality of the handheld for this match was decent and it gave a clear indication of just how hot the crowd was for the Bulldog. This, as well as the hatred towards Flair from the fans, allowed the two men to milk a lot of the simple, early spots for huge reactions (shoves out of a collar and elbow, test of strength, press slam, bear hug), meaning things took a little while to really get going and build a rhythm.

A low blow whilst the ref was unsighted by action in the corner gave Flair his opportunity to take control. Standard Flair spots followed as multiple pinfalls saw additional leverage with the help of the ropes, as does a figure four leglock. It was a decision to try and suplex Bulldog to the outside that ultimately cost Flair as the Brit reversed it, sparking a comeback. Flair did try once more to use the ropes in a flash pinfall attempts, but the official caught it this time. One Running Powerslam later, Bulldog had won in front of his home crowd clean. A decent match, though one that never really did a lot for me outside of garnering a significant crowd reaction throughout.

On the same tour, but in Germany, Randy Savage defended the WWF World Heavyweight Title against Shawn Michaels. Savage was selling a leg injury, though Michael’s willingness to bump big was on show early as Savage took the early control. It included one of my own favorite common bumps by Michaels: the one he would take into the ringpost. It always looked really good to me. Playing the new heel role effectively, Michaels threatened to walk out and in the resulting melee that also included Sensational Sherri, she took a huge bump off of the apron.

Eventually, Michaels does work the leg and we have the somewhat engaging narrative of the official talking about stopping the match and awarding it to Michaels, alongside the title belt. Three figure four spots was probably too many though, whilst the comeback by Savage was really short. I’d wondered how they might protect Michaels in losing, but they don’t really – a clothesline was enough to allow Savage to (slowly, selling the injury) head to the top and hit the elbow drop for the win. Sherri and Michaels do attack Savage post-match with a chair, which is something even though the ending wasn’t great for the duo. A solid match, especially considering there never felt like there was much quality control as to what ended up on a Coliseum Home Video.

The final three matches this week all came from the same event – the April 16 New Japan show. All were matches in the Top of the Super Junior competition, though the first two were seemingly only available in full via handheld. The first of these was Negro Casas taking on Eddie Guerrero, who was making his debut in a New Japan ring. Given only eight minutes, the two men traded both mat work and some strong strikes in what was an even contest through most of its run time. Guerrero in particular executed some effective looking submissions, including a modified leglock with bridge that drew a reaction from the crowd. A missile dropkick and plancha also allowed Guerrero to showcase his aerial ability, though he eventually took the loss following a missed drive and a Casas La Magistral. A neat showcase match considering the relatively short time given.

The second match saw 2 Cold Scorpio taking on Chris Benoit, both men who had competed in the previous years’ Top of the Super Junior. The initial exchanges on the mat focused on Benoit’s technical ability, whilst Scorpio utilized his athleticism to escape or attack in kind (such as a monkey flip after escaping a submission) before getting an ovation from the crowd with a plancha of his own. When the pace picked up, a sequence of reversals and a tope suicida by Benoit had the crowd shrieking with delight, though they immediately returned to the mat to trade submissions before building to the next big sequence. Another wild dive by Scorpio was followed by a vicious looking tombstone from Benoit, yet it looked – like with Guerrero – a missed dive would cost the Canadian. However, a sequence of reversals saw him catch Scorpio in a pin for the three count. A really good encounter that rose and fall in a fashion that had the crowd peaking at all the right times.

The third and final contest saw Jushin Liger taking on El Samurai, with Liger the current IWGP Junior Heavyweight Champion to add an additional wrinkle to the contest. Samurai was not impressed by the status of his opponent, taking an offered handshake as an opportunity to slap Liger around the face pre-match. This set the initial frenetic tone as Liger soon gained a measure of revenge with multiple shohtei palm strikes and a baseball slide to a frustrated Samurai. The hatred was raw as Liger caught a thrown chair from Samurai and pitched it straight back at him!

Things settled down long enough for an actual wrestling match to break out, though Samurai wasn’t messing around with his strikes or the submissions that sought to turn Liger into a pretzel at times. There was also some extra stank on a cannonball tope that also managed to send Samurai careering into the crowd in the process of taking out Liger. Samurai didn’t have it all his own way though as Liger also launched himself to ringside, this time with a move that resembled a flying back elbow as much as anything else. The hatred between the two played into a fun finish as Samurai not only ripped Liger’s mask, but hit him with a low blow before landing a huracanrana into a pin for the victory. Samurai now had a win over the champion, as well as a potential meeting in the final later that month.

A really good match to finish off this week’s selection of matches that all at least did their job, whilst many were well worth watching (via the Youtube clips) or finding online where possible. Check back next week as we continue with some of the Top of the Super Junior action alongside wrestling from the US and Mexico in That Was The Year That Was.