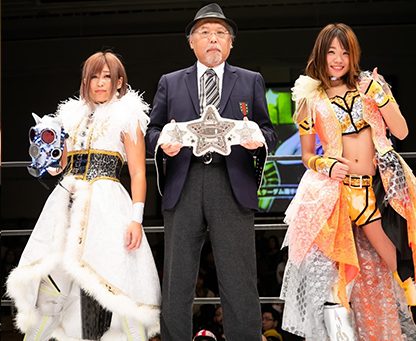 Stardom looks to close out 2019 with a bang as they have two highly anticipated title matches, a grudge match between Hana Kimura and Giulia, and to top it all off we have Hazuki’s final match as she takes on her stablemate Natsuko Tora.  This one is sure to be as exciting as it is emotional.

This was a dark match, meaning it won’t air on the Samurai TV broadcast and the crowd was only half full.  Despite this, the six wrestlers got the crowd into their match and everyone got their moment to shine.  This class of rookies shows that the future is very bright for Stardom.  Saya Kamitani got the win again as she continues to be primed for big things.  ***

The comedy elements of this one helped it stand out from your typical faction vs faction six-person tag.  Fun match that went about 10 minutes and never dragged. ***

For the most part, this was a standard trios title match for Stardom.  Where it really shined was when it played off some of the personal rivalries involved.  Every time SLK and AZM interacted was excellent and Saki Kashima renewing her grudge with Momo Watanabe carried the final stretch of the match as the two included callbacks to their GP match.  Momo pinning Saki is a good win for Momo who has felt like an afterthought for the past few months. ***1/2

Natsuko gets the torch passed to her here as she gets the victory over Hazuki.  With both Hazuki and Kagetsu retiring the future of Oedo Tai is in limbo but of there was to be a new leader then Tora would be the obvious choice.  The match itself was power vs speed but the result was never in doubt.  Hazuki’s post-match comments were interesting, saying she hated Stardom and hinting at being forced into retirement, and will only fuel the speculation that has swirled regarding her and Kagetsu’s retirements. ***1/4

This wasn’t a well-wrestled match, not that it was supposed to be, this was a fight.  It was similar to Kimura’s match last year with Kagetsu where the match fit the story and the two competitors just tried their best to hurt the other one.  The result is interesting as it would seem that Stardom is all in on Giulia.  She has had 4 singles match so far with 3 wins and this one draw and she is going to participate in the Stardom offer match at Wrestle Kingdom 14.  At 25 years old and with only 2 years of experience it is a risky move from Stardom to strap the rocket to Giulia but she has always had the look and charisma necessary to be a big star in the joshi scene so I’ll have to wait and see how things play out before making a judgment.  For Hana, this will be chalked up as a failure to win another big singles match, for somebody that is heavily featured in stardom’s advertising they seem to be hesitant on giving her many Ws. ***

This failed to meet my admittedly high expectations.  Konami was tasked with slowing things down and working submission holds for the most part.  Towards the end, the intensity kicked up a notch with each woman delivering some devastating kicks to the other’s head.  It is clear to me that this match was laid out to put Arisa over and not Konami which makes sense as Arisa is one of the participants in the Stardom offer match at Wrestle Kingdom.  Going into this match I felt it was the perfect time to give Konami the title as she has recently debuted her final lancer submission and used it to win multiple matches in the build to this match.  Instead, Hoshiki’s reign continues which isn’t a bad thing as she has delivered in most of her title matches.  ***1/2

This was a tussle between two of the top competitors in Stardom.  Kagetsu was pulling out all the stops doing crazy stuff like jumping off a wall to deliver a double foot stomp.  Down the stretch they were hitting each other with some big shots, with Kagetsu even kicking out of Mayu’s moonsault at 1, and in the end, Mayu outlasted Kagetsu for the win.  This had a big fight feel, as it should when faction leaders square off, and it was a case of Mayu having more in the tank than the soon to be retiring Kagetsu  Knowing that this was the final ever match between the two makes the match a bit better as it can be seen as two rivals throwing everything they have at one another one last time.  ***3/4

Nothing was bad on this show and the main event was really good so this one can be chalked up as a success.  Hazuki’s retirement was extremely emotional and you’ll need tissues on standby.  Konami/Arisa failed to meet high expectations but it was still a good match.  Overall not the best Stardom show of the year but a solid trip to Korakuen to close out the year.  January’s Korakuen hall show already looks loaded with Momo vs Mayu and Utami vs Arisa so Stardom is sure to kick off 2020 with a bang. 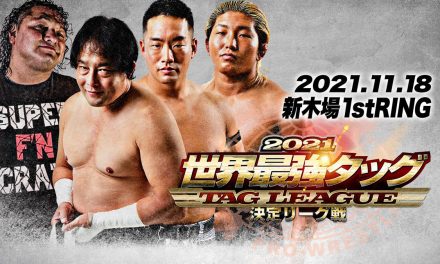