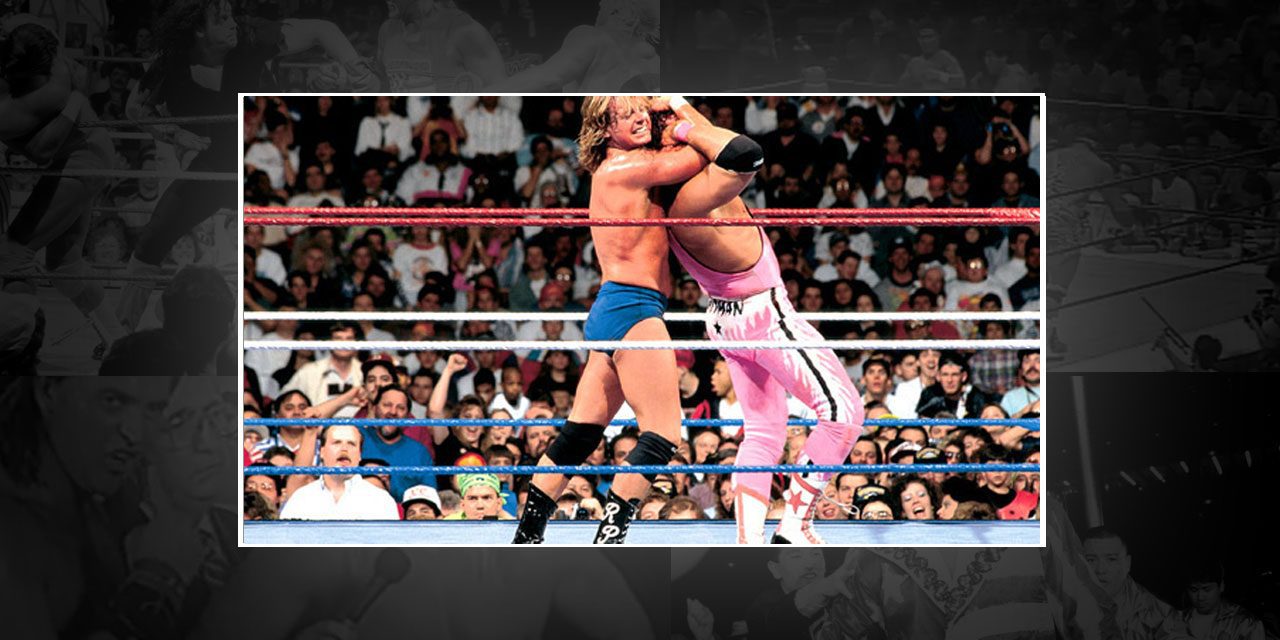 The collection of matches and segments I am watching for this series come from a 1992 Yearbook created by Goodhelmet, a longtime poster at the Death Valley Driver Forum and other wrestling places. A cross-section of the best (and worst of wrestling within a certain year), it is a great snapshot of everything of importance. This article covers footage from April 5-11.

With many an article focused primarily on the road to WrestleMania, the huge show was finally upon us.  Whilst not everything would go to plan come the end of the PPV, it did create at least two matches that still hold up enough today to be worth a watch by any wrestling fan.

Pretty unashamedly, Roddy Piper versus Bret Hart at WrestleMania VIII is one of my favorite matches of all time. There may be technically better, bigger and brighter matches, but this was one I watched and fell in love with as a child and still holds up on every single watch even as I rapidly approach (am in?) middle age. Having been able to watch some of the build-ups during this project has only made me enjoy that much more. Like Savage/Flair, the turnaround on ‘building the feud’ was relatively short, but with the legitimate history between the Harts and Piper, it was simple to tap into that, alongside Piper’s heel proclivities of the past.

After a misguided decision by Piper to grab Hart by the cheek mid pre-match interview almost sparked a brawl between the two men, a contest clocking in at just under fourteen minutes unfolded which told the perfect story for a young fan such as myself. Used to the colourful characters without necessarily taking stock of the storylines at that time, I was blown away by a match in which the narrative played out so readily in front of my eyes. Piper’s frustrations were evident early, choosing to mark a moment where Hart outwrestled him by spitting at the Hitman. Hart also earned a slap around the face for channelling Piper himself by faking a shoulder injury in an attempt to steal the win with a small package.

Everything felt like it was building up to the moment in which Piper would turn, and he sowed the seeds with some misdirection as he had Hart looking at his laces before blasting him with a right hand. Hart begun to bleed as Piper pressed home the advantage, even biting at the wound in his desire to win. Potentially playing possum once more, Hart caught Piper on the top turnbuckle, sparking a comeback that begun to incorporate all of the Hitman’s traditional moves of doom. Credit to Hart for taking a boot to the face that looked as legit as possible on a whiffed second rope elbowdrop moments before the ref bump that allowed things to build to a classic finish.

With the ref down, Piper grabbed the ring bell and you could audibly here the fans imploring him not to do it as he stood over Hart with the weapon in his hand. The crowd, the tired Hitman, the blood pouring down his face – it all just added up to a brilliant two minutes of wrestling. That Piper decided not to, immediately leading to a sleeper that Hart used the turnbuckle to turn into a pinfall for the win was great storytelling; Piper’s decision not to cheat cost him dearly. There was still the tension as to what might happen post-match, but Piper handed the belt to Hart to end their brief rivalry. Just wonderful wrestling.

With Vince McMahon trying to get the WBF out into the wider world, it was strange to see Lex Luger on WWF television with the focus on bodybuilding rather than wrestling. Bobby Heenan’s sycophantic love for Luger is brilliant, as is Luger referring to Gorilla Monsoon as ‘the fat guy’. This was more of a curio than anything special to be honest.

WrestleMania VIII was the first Wrestlemania since its debut that didn’t have the WWF World Heavyweight Title defended in the main event. Instead, Randy Savage challenged Ric Flair for the belt in the middle of the card, though they did brand the show as having a ‘double main event’. Ric Flair and Mr Perfect’s pre-match promo showcased that they had ‘the centrefold’ ready to be unveiled; Gene Okerlund’s attempts to talk with Savage failed the Macho Man refused to do interviews.

Savage set the tone the moment he headed down to the ringside as he chased Flair out of the ring and up the rampway, only being halted by the physical involvement of Perfect. Savage fought like a man who had had his wife’s name dragged through the mud – there were no headlocks or wristlocks here. Savage was always good at bringing the hate, whilst another of the many strings to his bow was as a bumper and a seller, garnering great sympathy as Flair methodically beat him down. When needed to, Savage brought the fire and Flair presented as the vulnerable champion, getting chucked off of turnbuckles and drilled with double axehandles from top to the ringside floor.

It wouldn’t be a Flair title defense without some blood and Savage ramming Flair’s head into the ringpost resolved that issue. So fundamental to the storyline in his role alongside Flair, Perfect saved Flair from a loss via top rope elbowdrop, whilst also introducing both a knuckle duster of sorts and a chair – one former used by Flair, the latter by Perfect himself. Before the end, another moving piece in the whole storyline became involved as Miss Elizabeth hit the ring, fighting off the overtures of WWF officials to stay backstage. The finish itself felt a little anticlimactic as Savage fought through an injured leg to land a punch, roll Flair up and grab the tights for the win, but it was the right result, as was the decision to have Liz put some slaps to Flair after the match following a forced Nature Boy kiss.

What we do get following this title change is a brilliant bug-eyed Flair promo. Half of his face covered with blood, Flair promised to retain the belt as one time meant nothing as Savage wouldn’t be able to do it again. That the heels complain so vociferously about handful of tights is also a brilliant little touch. In return, Savage got a chance to speak with Okerlund, focusing on how he was willing to do anything to win and how Flair had managed to anger him even more than he had done with his previous allegations by putting his hands on Elizabeth. Nothing feels like it has been settled just yet, that is for sure.

The way the set worked was that it often included the best and worst matches and segments, so whilst the Hulk Hogan versus Sid match was noteworthy, it only ended up getting a clip of the ending. Whilst I remember well that Piper/Hart match, I literally remembered nothing much about the Hogan match outside of the botched finish and the Ultimate Warrior return. Perhaps it was the lack of any stakes, the feeling that Hogan had been done to death in this position, or that it might be his last match, but even in the clip of the finish, it felt relatively flat compared to what had come before it. We get the inevitable powerbomb kickout, then a less expected legdrop kickout (Papa Shango missing his cue) before the arrival of the Warrior to save Hogan. Considering where Warrior and Shango would be come the end of the year, none of this really panned out the way they’d hoped, I’m sure.

Over in Memphis, we got to see a trope of Memphis television that utilised an episode in order to – at least briefly – put a heel in the position to work alongside Jerry Lawler. Incorporated within the half an hour of footage were more interferences than you can shake a stick at, plus another Memphis favourite: a run in with a bag of flour.

It began with Eric Embry fighting a jobber, only for the Moondogs to come down and attack him. With little to go on outside of what I was presented, this seemed to be due to Embry fighting back the previous week when something similar had happened to end the match against the Dirty White Boy (something confirmed by the interview below, not included on the set). In this beatdown, Embry took a number of shots to the head from chairs and bins that were completely unprotected.

What followed was footage of a paint by numbers match between Jeff Jarrett, Jerry Lawler and the Moondogs, now with Cujo in opposition (otherwise known as Cousin Junior to older WWF fans). Considering the use of weapons from the opening bell, a simple Richard Lee trip and holding down of Lawler’s foot was enough to give the decision to the Moondogs.

This was where things sparked into action as a desperate Embry, who had stayed at ringside during the footage, tried to convince Jarrett and Lawler to let him team up with them. At no point did he forego his heelish ways, yet he saw himself as helping to create a trio to get rid of the Moondogs from Memphis once and for all. As was often played out with this show long angle, Lawler wasn’t happy to take a heel’s word as his bond, turning down the offer without too much hassle.

Naturally, a Lawler and Jarrett match against the Invaders not only brought the Moondogs down to the ring for the disqualification, but it also gave Embry a chance to prove that he was willing to back up both Lawler and Jarrett in a fight as he attacked the Moondogs with a bag of flour as a weapon. Still concerned, Lawler made the stipulation that Embry would have to leave the area if he turned on either of his partners come Monday at the Coliseum, a stipulation that Embry readily accepted.

In between all of this action, the Moondogs also managed to get themselves involved in a match between Dr. Tom Prichard and Brian Christopher, one that Prichard was in control of as chain wrestling gave way to throwing fists. Later on in the show, once Embry had solved the problem with the Moondogs, an angry Prichard challenged Christopher to come to the ring and fight him. Busted open during the Moondog attack, Prichard initially struggled, but a backslide was enough to pin Christopher’s shoulder to the match.

The drama hadn’t quite finished yet as Christopher claimed not to have put the title on the line. An attempt by Eddie Marlin to get involved and award the title to Prichard was halted by another official, leading to Christopher attacking Prichard with the belt and even striking Marlin, although the grizzled veteran then got in a few licks of his own.

This as a sequence of events came down to how much you loved seeing the Moondogs fighting on your television. Adding Embry to the mix after Cujo recently also spiced things up is definitely a way of prolonging the feud in a way that was interesting, but in terms of a wrestling show, having the Moondogs come out in three different matches felt like overkill.

Going from the grandeur of the spectacle that is WrestleMania to a Memphis studio covered in flour was definitely a tonal shift. Any sequence of matches with Hart/Piper kicking about on it works for me, though things definitely did take a turn for the worse after the WWF World Heavyweight Title match. Join me next week as I continue to review the key moments of 1992 in That Was The Year That Was.