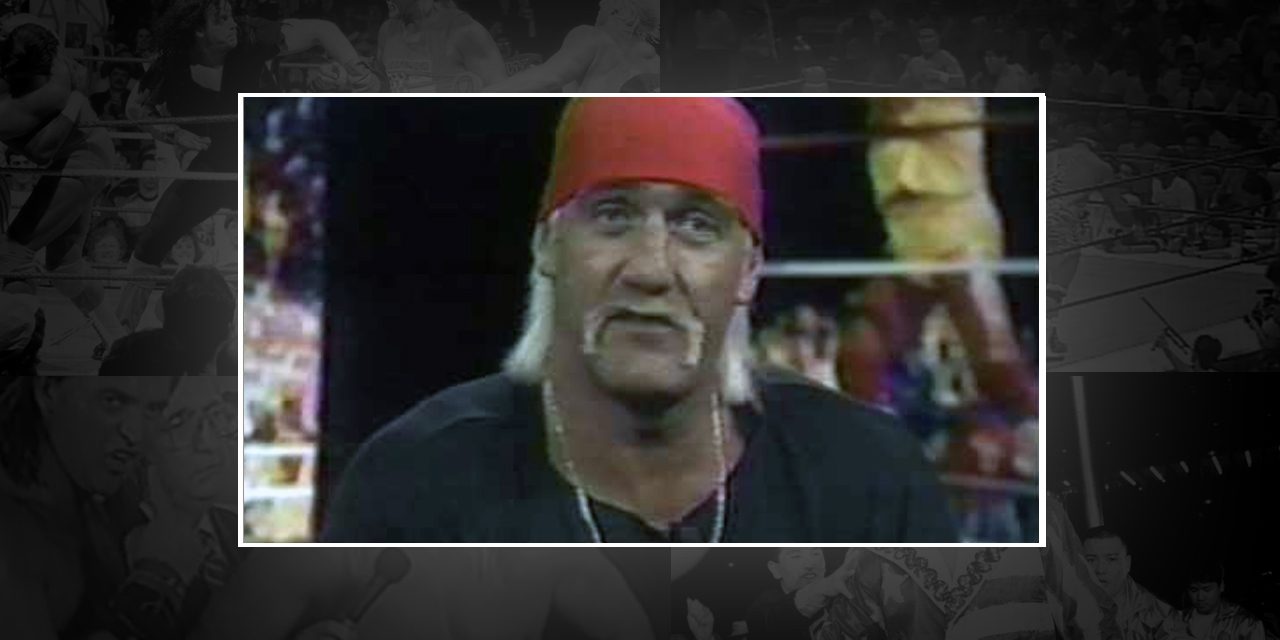 The collection of matches and segments I am watching for this series come from a 1992 Yearbook created by Goodhelmet, a longtime poster at the Death Valley Driver Forum and other wrestling places. A cross-section of the best (and worst of wrestling within a certain year), it is a great snapshot of everything of importance. This article covers footage from April 3-4.

There was a relative smorgasbord of action this week as shoot-style and some independent American wrestling accompanied the big two in the United States in a busy two day period.

Though I have often mentioned my general apathy for the shoot fighting style of wrestling, an opportunity to see Volk Han in action is one that intrigued me considering how often I had heard his name mentioned with ringing endorsements. His opponent was Akira Maeda, the two seemingly having met the previous year so they had some history. I am not qualified to adequately term some of the moves used in the contest, so I’m just going to say that an early hold and trip by Han to take the match to the canvas was beautifully applied. The strike exchanges were consistently meaty from both men, whilst each used a rope break relatively early on during battles over a leglock. A particular highlight saw Maeda almost knock Han out with a spinning wheel kick after another Han rope break. The struggles of the mat were fun if that is your thing and eventually led to the finish, as Han – who had targeted a visible thigh injury a couple of times in the match – grabbed and tweaked Maeda’s leg just as it looked like Maeda had the submission on his opponent.

The GWF was the next destination as two title matches took place on the same show. The first saw Barry Horowitz put up his Light Heavyweight Title against ‘Nightmare’ Danny Davis. This was a pretty average match that followed an obvious structure: Horowitz outwrestled at the start, earned some heat in the middle before heading to the finish. During his segment on top, Horowitz did admittedly hit a reverse DDT into a backbreaker that looked impactful, even though the majority of the offense on show was pretty basic. Cutting off a brief comeback by Davis, Horowitz’s arrogance got the better of him as a repeated attempt to hit a back suplex after a push into the turnbuckle saw Davis turn in mid-air into a pin for the three count and a new champion. Fine for what it is, but nothing special.

The second title match saw brother versus brother as Eddie Gilbert defended the Heavyweight Title against the Dark Patriot. Things began with the announcer revealing that Bruce Prichard was barred from ringside, something that was eventually enforced by James Beard rather than Sam Esposito. Beard also refereed the contest, following much controversy around Esposito’s behavior in recent weeks. Before Prichard left, he handed something to the Patriot, which came into play early on as he halted a fired-up Gilbert with an illegal weapon shot of some sort.

Another weapon shot allowed the masked man to hit a piledriver, yet that wasn’t enough to end the contest just yet. With all the messing about with referees recently, it was unsurprising when Beard took a bump off of an errant Gilbert clothesline. However, an attempt by Prichard to take advantage with a title belt shot saw him hit his own man to allow Gilbert to retain. As per the stipulations for the match, the Dark Patriot was required to unmask, but in a decision that can only piss fans off, he ‘unmasked’ to reveal he was wearing two masks. Again, a decent enough contest without being spectacular, with a pretty poor booking choice that attempted to circumvent the set stipulation.

As part of the WWF Update on the day before Wrestlemania, Miss Elizabeth finally got her chance to speak her own thoughts on the claims of Ric Flair. Vince McMahon joined her in her home as Elizabeth spoke about her anger surrounding the whole situation. To prove things were falsified, Randy Savage was going to give negatives of the original, Flair-less, photos to the magazine. Not necessarily known for her talking, Elizabeth does a good job here of conveying her frustrations and upset about the fact that people took Flair at face value, as well as how this had besmirched her reputation.

With regards to Elizabeth’s claims, Gene Okerlund joined Ric Flair and Mr Perfect later on in the same show with Okerlund seemingly eager to play the white knight and restore Liz’s honour. Unsurprisingly, Flair and Perfect call her a liar, with the focus going to how much Elizabeth enjoyed every moment of it, especially riding Space Mountain. The end of the segment had Flair and Perfect promise to reveal the ‘centerfold’ at Wrestlemania, allowing the fans to decide just how hot Elizabeth truly is. Great work as always.

Wrestlemania VIII was being sold as potentially the last match of Hulk Hogan’s career and he got the full eight-minute treatment as ‘A Tribute to…’ looked at some of the biggest moments in Hogan’s career. Gorilla Monsoon and Bobby Heenan did additional commentary over footage of Hogan/Andre from Wrestlemania III and Hogan/The Ultimate Warrior from Wrestlemania VI before Vince McMahons sat down and talked with Hogan himself. This all led to McMahon challenging Hogan as to whether this was going to be his last match or not. Ever the politician, Hogan danced around the answer, stating that he wouldn’t know until he came out of the ring at WrestleMania VIII.

Even after spending every week for the first three months of the year with the duos feuding in some capacity, The Moondogs and the team of Jeff Jarrett and Jerry Lawler continued their rivalry heading into April as well. In the middle of a tag match between two other teams, Richard Lee headed down to commentary to ask for Eddie Marlin to suspend Jarrett and Lawler for leaving Moondog Spike in the hospital with a concussion. Lawler and Jarrett came out to get in Lee’s face and eventually challenge Lee to a match. This all was about – after stripping Lee in the middle of the ring – debuting a new Moondog as two Moondogs hit the ring to brutalize the face team. It goes a little long for my liking, but does the job of prolonging the feud with yet more new blood involved.

On the same show, Eric Embry and the Dirty White Boy collided in a stretcher match, a contest you’d more likely expect to see at the Mid-South Coliseum so you can only really expect shenanigans of some sort. This was a fight from the moment the two men hit the ring as they fought in and around the ring with nary a wrestling hold to be seen. My fears about what was going to happen were quickly confirmed as the Moondogs came down two minutes into the fight and attacked the Dirty White Boy. This attack was not exclusive as they hit the referee and even took out some of their frustrations on Embry. Lawler and Jarrett do eventually clean house to save everybody from the Moondogs, though it was a shame to see what could have been a hot match descend into further Moondog/Lawler and Jarrett brawling.

Heading to Smoky Mountain Wrestling, Jim Cornette continues to have significant problems in announcing his new tag team. A third VT of Cornette’s attempts had him bringing a camera to a hotel room in order to ensure no-one could find out where they were. However, Cornette ended up getting pelted with women’s clothing the moment he unlocked the door. The following week was going to see no more VT; Cornette promised that the team would be in the studio. Later on in the same show, Ron Wright’s newest acquisition, Dirty White Boy, was out to sell the Volunteer Slam, eventually bringing out ‘Primetime’ Brian Lee to get in Boy’s face. Cornette, Wright and Boy only serve to showcase how bad Lee was on the microphone.

The final match this week looked like a beauty on paper as Steve Austin, Rick Rude and Arn Anderson met Dustin Rhodes, Barry Windham and Ricky Steamboat on an episode of the Main Event. The crowd was pumped for the action from the get-go and Anderson’s bumping for all three of his opponents in the early going only amplify the reaction from the fans in attendance. It was Austin’s turn next to make the face trio look excellent, taking a huge bump on a mistimed second rope move that saw Rhodes take his head off with a clothesline instead.

Things slowed down to milk the arrival of Rude into the match, though he was soon on the receiving end of numerous chops by Steamboat that sent him over the top rope. It ended up taking a knee from the apron by Anderson to halt Windham, with the ensuing beatdown once again playing out to a raucous reception, especially with moves such as Austin hitting an axehandle off of the top to break a desperation abdominal stretch from the big Texan. The hot tag to Steamboat, following Windham halting an Anderson second rope move with a boot to the face, had the crowd going crazy, but those cheers turned to boos as Austin whacked Steamboat with a chair to cause a DQ.  The face trio was left standing tall after a brief skirmish in a good match played out in front of a great crowd.

Consider the decks cleared. Next week, WrestleMania VII – a PPV that I have watched many times – is the focus as we continue to document 1992 in wrestling on That Was The Year That Was.