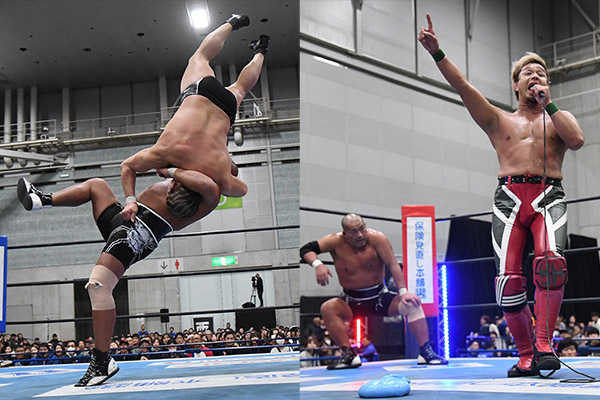 The match itself was fine but the real story here was KENTA running in and attacking Goto, leading to the DQ. This was the most thorough beating KENTA has dished out to Goto this tour delivering a particularly nasty looking G2S and rubbed salt in the wounds by doing the Shibata pose on top of him. ***

Not even Shingo Takagi could carry Makabe and Honma to a good match. My complaints in the last few GBH matches are Honma being in the ring way too much, in this Makabe actually did more and it was just as mediocre. **1/2

Speaking of people I’m sick of watching, Nakanishi is so, so washed. This was not good but at least it was short. I do like how G.O.D they’ve gotten the OJK submission over but that’s about it from them this tour. **

This might be my favorite match of the night and it was 99% because of how awesome Kojima was in this. He looked like the biggest badass in the world and it made me very sad we didn’t get a farewell G1 for him. His exchanges with EVIL, in particular, were fantastic. The result means all EVIL and SANADA have to do is win on Sunday and they become three-time World Tag League champions. ***1/2

A well-executed but dull match that achieved what it needed to. Finjuice just needs to beat EVIL and SANADA on Sunday and at the very worst they’ll be joint Tag League winners. **3/4

I didn’t really like this match but absolutely loved the finish. Zack and Taichi wrapped Yano and Colt up in the ring apron and they got stuck on the outside and got counted out in a fantastic call back to how Yano beat Taichi in the G1 earlier. No company bothers to reward you for watching the product than New Japan. Other then that finish the match was bleh. **3/4

This was an exhibition of how to sell and be babyface in peril from big Tom Ish. He took a beating for 15 of the 17 minutes this match went for. I know he’s knee is taped up and he’s most likely hurting but the way he was selling it I thought he was properly injured. Normally an extended beat down would bore me, but there were the right amount of hope spots from both Ishii and YOSHI-HASHI to keep it interesting. This was a really exciting closing stretch to end this one with Ishii hitting the Brainbuster on Suzuki. ***1/2

Out of all the shows I’ve watched this year, this was definitely the most recent. A nothing show that was just the means to an end to so we can get to the final night. Our scenarios are Ishii/YOSHI-HASHI beating G.O.D eliminating them which makes EVIL/SANADA and Finjuice winner take all. If G.O.D win and EVIL/SANADA win, EVIL and SANADA win the tournament because of the head to head. If G.O.D win and Finjuice win it’s a three-way tie.