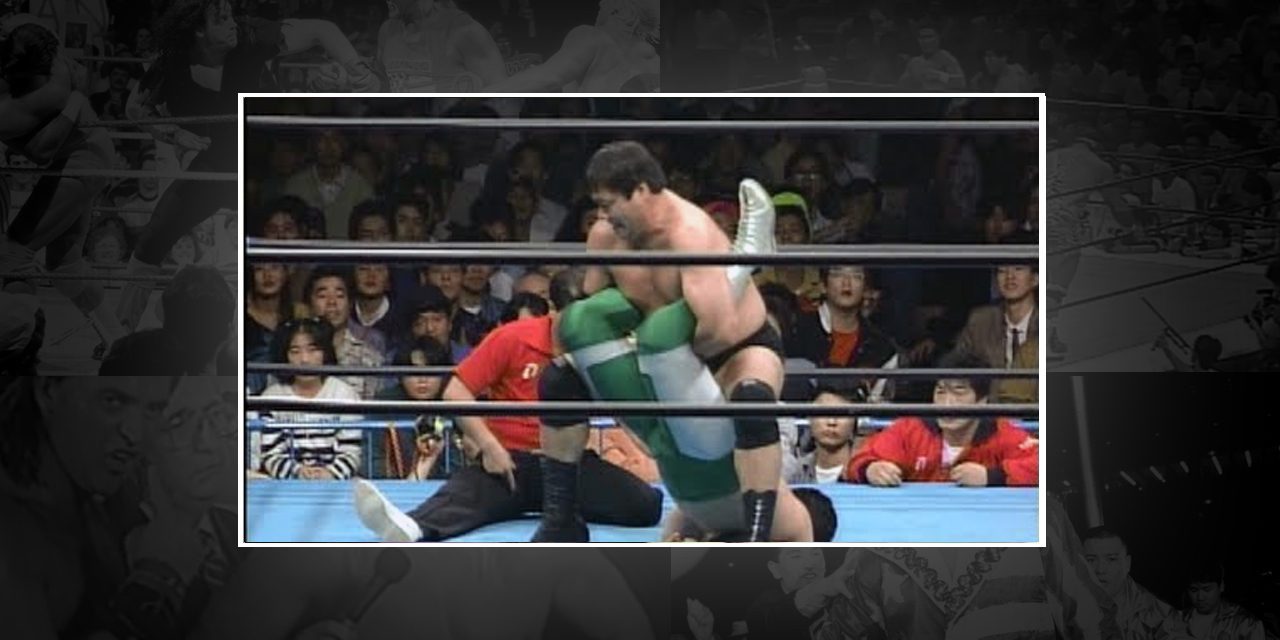 The collection of matches and segments I am watching for this series come from a 1992 Yearbook created by Goodhelmet, a longtime poster at the Death Valley Driver Forum and other wrestling places. A cross-section of the best (and worst of wrestling within a certain year), it is a great snapshot of everything of importance. This article covers footage from March 28-April 3.

What staggers you about a project such as this is how, by a quirk of fate, some absolute bangers are being played out in different promotions across the world within hours or merely days of each other. On paper, a lot of great action was promised by the events scheduled for the end of March and beginning of April – let’s see if they delivered on that promise.

The strength of the Dangerous Alliance versus WCW feud is how many quality matches you could milk out of it for television, not just on your PPV. With that in mind, Arn Anderson took on Ricky Steamboat in a match that was only ever going to be good at the very least. This was all about the escalation of violence, especially with regards to Steamboat’s willingness to bend and outright break the rules to deal with the situation. The contest was unsurprisingly back and forth with a back suplex eventually leading to a stretch where Anderson managed to work over Steamboat and cut off any comeback attempts. This included a classic spinebuster that was expertly executed, though shortly afterward led to a double down after a collision following an atomic drop that had Anderson hit the turnbuckle and rebound into Steamboat.

With Steamboat firing up, an irish whip sent Anderson out of the ring whilst knocking Dangerously into the ring for the fired-up babyface to beat on. An attempt by Rick Rude to halt the attack with a chair was thwarted by the referee, who took a bump for his trouble. Turnabout was fair play at the end as an attempt by Rude to choke Steamboat with a belt failed, leading to Steamboat hanging Rude over the top rope with the same belt wrapped around the heel’s neck. He even managed to avoid one last Anderson attack to be the last man standing in the ring in a good match with some great work in the finish to show the lengths Steamboat was willing to go to in order to deal with the Dangerous Alliance.

Eric Bischoff and the WCW Magazine were next up in order to fill us in on what was happening promotion-wide. Nikita Koloff had returned at Superbrawl, leading to a clip of an interview with Jim Ross in which Koloff refused to discuss why he had returned until he had had a conversation with one man in particular – that person knew who they were, apparently. After a clip of the previous match between Anderson and Steamboat, there was then the finish to a match between the Z Man and Greg Valentine in which Zenk won via small package as Valentine went for the figure four. This was all to set up a US Tag Team Title show in which Zenk and Marcus Alexander Bagwell were taking on Valentine and Terrence Taylor. To finish, a fan question about getting a manager for the Steiners was answered by Rick, who categorically stated they didn’t need one as they were willing to take care of business on their own.

On the March to Wrestlemania, a big match took place on Prime Time Wrestling as Roddy Piper took on Shawn Michaels, ably accompanied by Sensational Sherri. It was Sherri who helped get things started in a fired-up manner as a look up Piper’s kilt led to a Rowdy slap on the arse. Shoves, punches and even some spit from Piper had things heated from the opening exchanges before Michaels was lucky to escape after a slingshot into the corner saw him collide with the ring post. Adding to the casual sexual assault from earlier, Piper even found time to smooch Sherri, though this left him open to a clothesline that sent him to the outside and turned the tide in Michael’s favor.

A sleeper and a pre-Sweet Chin Music-era crescent kick had Michaels fully in command, but the teardrop suplex attempt was a bust and only kindled a Piper fight back. Michaels was always great with his selling during this initial heel run in the WWF, with a kick by Piper sending Michaels from being sprawled across the turnbuckle to getting crotched on the top rope. A ref bump allowed Sherri to throw in her boot, but the official was still down when Michaels tried to take advantage. A brilliant little storyline feature followed as Bret Hart hit the ring, threw the boot to Piper, ending up with the official seeing the Rowdy one and disqualifying him. This didn’t sit well with Piper, who told Hart to stay out of his business. This was a really fun little match and the finish was some good storytelling.

If you told me that Akira Taue and Toshiaki Kawada genuinely don’t like each other, I wouldn’t be surprised after watching them beat seven shades out of each other in the next contest. From Taue jumping Kawada during his entrance and eventually landing a Nodowa Otoshi on the concrete, to Kawada hitting an awesome jumping kick to the face to drop a charging Taue before returning the favor with a slam over the guardrail minutes later, the two weren’t messing around. Even a Taue escape from a side headlock was nasty as he picked up Kawada and dumped him leg first on the top rope.

The middle slowed down ever so briefly, but they were soon back to beating lumps out of each other as Kawada landed a ridiculous elbow drop off of the apron a la Cactus Jack. Taue was able to kick out of a pin following a first powerbomb attempt, before a second attempt by Kawada saw an excellent nearfall as Taue just ended up rolling through the move to almost grab the pin. It ended up taking FIVE Nodowa Otoshi variations to finish Kawada off; three kicked out of, two in a row by Taue for good measure. This is great professional wrestling and gets a highly recommended vote from me.

In a match from a few days later (both from the Champions Carnival), Jumbo Tsuruta collided with Mitsuharu Misawa in a match that saw Misawa seek to continue his ascent up the All Japan ranks. The match felt clearly split into three sections, with a methodical beatdown by Jumbo after some early missed moves by both men gave way to Misawa being in control after a German suplex for two. This was followed by a running forearm off of the apron and a sweet springboard back elbow off of the second rope, but the second Jumbo regained control (after blocking a frog splash), he sought to end Misawa with some high impact offense. Out came the running dropkick, a top rope crossbody and two powerbombs, but Misawa wasn’t going to stay down.

In fact, with the thirty-minute time limit rapidly approaching, it was Misawa who threatened to take the win with some flash pinfall attempts and a facelock that the fans went wild over. However, Tsuruta did nail his backdrop driver after some switches and reversals, only for the bell to ring – and Misawa to get his foot on the rope – at two, signaling the end of the contest. A slow-burning, competitive battle that eventually meant that Misawa would top the group (Jumbo having drawn with Terry Gordy earlier in the tournament) and battle it out in the final later on in the month.


Over in Mexico, a huge CMLL card saw Atlantis defending the Middleweight World Title against La Fiera. The primera caida begun with submissions and reversals, all very respectful, before a quickening of the pace saw Atlantis take the pinfall after a flipping springboard plancha. He was lucky that Fiera moved himself into position quickly following a turnbuckle bump or Atlantis could have hit hard on the canvas. The segunda had Atlantis falling to the outside following a Fiera spinkick during the opening exchanges, though the challenger was unable to capitalise at that point. What he did capitalize on was a handshake offer that Atlantis looked to accept; Fiera kicked him to take control, before a sequence of an enziguri that sent Atlantis outside the ring and an over the top rope plancha gained Fiera the fall via countout.

The narrative of the tercera was that Atlantis was suffering with an arm and/or shoulder injury, which Fiera targeted with headbutts, kicks and punches. A tilt a whirl backbreaker sparked an Atlantis comeback, until a distraction by Pierroth, Fiera’s cornerman, allowed the challenger to hit an illegal low blow. If he had his choice, he’d have also landed a martinette/tombstone, but the referee blocked the move that would have led to a disqualification. Moments later, Fiera was strung up in La Atlantida as Atlantis retained the gold. Not a match for me really as I prefer my lucha libre either super spotty or more hate-filled than this. The tease of Fiera getting the win via low blow was cool though.

A heated feud looked like it was coming to a head as Blue Panther and Love Machine met in a mascara contra mascara contest, but instead the stipulation and the rules are perfectly used to further the storyline in a great angle. The match itself was decent, if unspectacular for a match with such high stakes, but that was primarily because the contest didn’t go past the segunda caida. In the primera, Machine initially controlled the contest up until missing a top rope elbowdrop, with Panther returning the favour by ramming Machine’s head into the ringpost just as had happened to him in the opening exchanges. A submission from a beautiful double underhook backbreaker had Panther a fall up and in pole position to win.

Love Machine’s offense was often a bit awkward throughout the match, especially a couple of DDTs that perhaps were Panther’s fault for not quite bumping as you might expect someone to on that move. A gutwrench, a suplex at ringside and a springboard plancha to the outside from the apron have Machine in control, as does a top rope face crusher. However, rather than win, Machine picked up Panther and hit him with the martinette/tombstone piledriver for the disqualification. Panther won in two falls, yet was carried out on a stretcher; Love Machine was revealed as Art Barr and he gave Panther another couple of strikes whilst the masked man was being helped from the ring. Being aware of what comes next here helps, as the match itself wasn’t the greatest, but the angle to finish leads to some great action later in the year.

This was one of the best selections of matches I’ve had the pleasure of viewing so far, with my own personal favorite having to be the Taue versus Kawada slugfest. Special mentions go to the HBK/Piper match that I actually had watched before on a 1992 Year in Review VHS – it brought the memories flooding back the moment it began. 1992 is on a roll; can it continue? Find out next week on That Was The Year That Was.