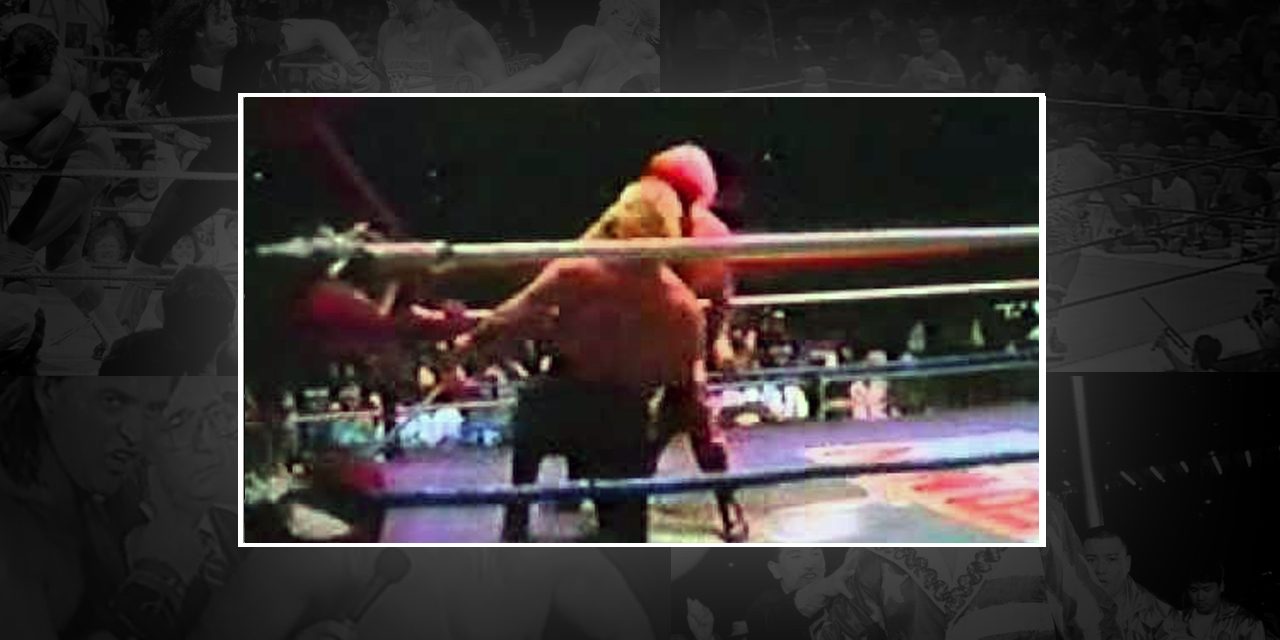 The collection of matches and segments I am watching for this series come from a 1992 Yearbook created by Goodhelmet, a longtime poster at the Death Valley Driver Forum and other wrestling places. A cross-section of the best (and worst of wrestling within a certain year), it is a great snapshot of everything of importance. This article covers footage from March 21-28.

Following an article that was big on puro, joshi and shootstyle, the road to WrestleMania takes over in grand form as many promos and interviews help to promote the PPV, alongside a big Madison Square Garden show in which some of the notable names collided in the main event.

With that in mind, a Mean Gene Okerlund spotlight once again chooses to focus on the Randy Savage and Ric Flair feud. This time, he joins Flair and Mr. Perfect on Flair’s yacht, which is the site of an apparent party due later that night. More photos of Elizabeth are revealed, such as them in the dining room and in the stable (Liz with her ‘two favorite studs’ – it may get the best line, but it is also the fakest looking), though his favorite is still the photo by the pool. In two weeks, Flair will make Savage ‘damaged goods’ just like Liz already was, making them perfect for each other. The great work by Flair, selling a story in a very short window of time, continued, unsurprisingly. To follow the segment, the WWF also re-aired the ‘UNTRUE!’ interview with Savage which worked so well to show how unhinged he had become.

Mean Gene Okerlund is a busy man at this time of year and is next up with Hulk Hogan to conduct an interview in front of the fans. This audience, in particular, went crazy for Hogan, though this is pretty standard Hogan-fare in terms of promos. What does make it stand out a little is how Hogan compared the cold look in Sid’s eyes to that which you’d see for people like Jeffrey Dahmer and Charles Manson, which is an interesting comparison. However, it is all about the power of Hulkamania which will be proved at Wrestlemania.

A couple of moments from Memphis followed as Brian Christopher talked up a contest he was due to have with Jimmy Valiant. Christopher talked up how ripped and strong Valiant was, but that this was a time long ago. When Valiant came out, it really blew my mind as I’d never seen any of him wrestling in the nineties and he looked old as balls and incredibly odd-looking due to how skinny he was. His first move was to give Christopher a kiss, so he hadn’t lost any of his spark in terms of his behavior at least.

This was a good segment as it went on long enough to the point where you thought that perhaps Valiant might get away without a beating as he talked about getting in the ring and having a fair fight as friends. The two slapped hands on it, Valiant went to do it again and got punched in the face before a minor beatdown followed. Having Valiant in a program at this point in his career doesn’t necessarily speak to the quality of your roster, but he was still popular and Christopher himself is a great smarmy heel.

A much shorter segment from the same show was mainly there to show the return of Dirty White Boy. It was a simple and effective return promo that dwelled upon the actions of Eric Embry from the previous week, with Dirty White Boy promising sweet revenge.

More segments from television followed as two from Smoky Mountain Wrestling continued the build to their Tag Team Title Tournament. The first was a music video that heralded the arrival of The Wild Bunch, Joel Deaton and Billy Black. The footage was mainly, if not all, from All-Japan, especially focusing on a match against Kenta Kobashi and Johnny Ace. The duo look really exciting as we are shown moonsaults to the outside and cartwheel elbows amongst other things…and they wrestled only twice in SMW in total.

Jim Cornette’s attempts to reveal his tag team for the tournament encountered another roadblock in a fun little segment. The plan was to unveil who they were in Hooters; the issue was the sexual appeal of his tag team meant that the girls blocked off any chance of Cornette, let alone the camera, getting to the duo. Entertaining television and continued to build heat on a team that hadn’t even arrived yet.

With Wrestlemania just around the corner, there was one more chance to book Madison Square Garden and highlight the biggest stars of the promotion. The main event saw Hulk Hogan team with Roddy Piper to take on Ric Flair and Sid Justice. Pre-match, Lord Alfred Hayes talked to the two faces, with Piper acknowledging that they had been there ‘since the beginning’ and he’d met bullies like Sid before, so all he ever needed to deal with them was a man in his corner. A Hogan pep-up slap to the shoulder had Piper wincing in a nice little touch to finish.

Talking of nice little touches, having Howard Finkel announce that Shawn Michaels had left the building just before the main event was a great heel move and was roundly booed by the fans.

This tag team contest was all about setting in motion the interest for Hogan and Justice, with Flair doing a lot of the legwork in between. Indeed, in the opening few minutes he bounces around like a pinball, including going up and over the turnbuckle and running straight into a big boot from Hogan. Having initially been pushed back by Justice as the two men collided in the ring, a blocked turnbuckle smash and a rally by Hogan has the crowd coming unglued, yet the moment Justice cuts off their hero, there is almost silence. Several spots make Justice look impressive – a kickout before a count can even start, a nip-up out of a headscissors – though a chairshot to Piper at ringside looked awful.

Piper was the face in peril but made the mistake of not making the tag after catching Sid with a punch as the big guy came off of the second rope with an axehandle. Finally, pitching Flair off of the top was enough to allow him to make the hot tag. The finish became a bit convoluted as a legdrop by Hogan led to Harvey Wimpleman grabbing Piper to distract the referee and allow Justice to nail Hulk with Wimpleman’s bag. This was only enough for a two, but it brought all four men into the ring and inspired Piper chasing Wimpleman around the ring. With this occupying Sid and distracting Flair, Hogan landed a big clothesline on the world champion for the three count – the spot was almost missed in the initial filming, but was shown in a replay. A heated and enjoyable encounter hurt a little by a finish that seemed to be there just to give Hogan a visual and an actual win over the WWF Heavyweight Champion.

With only one week to go now, Ric Flair and Mr. Perfect hold a press conference for WWF Update, though one with no-one actually present. This was all about Flair showcasing the various photos, alongside a reveal of a scarf that Liz had worn in one of them. Flair talked about remembering the smell of Savage’s wife, as well as promising to wear the scarf at Wrestlemania.

Hogan had his time with Mean Gene Okerlund in front of the fans; a week later, Sid Justice gets an opportunity to address the fans. Vince McMahon drops the potential that this could be Hogan’s last match, whilst Justice immediately gets in Okerlund’s face to call him a ‘bald-headed little oaf’. This was all about Justice running down the ‘demandments’ of Hogan – he had trained for five years for this one match; all the vitamins in the world couldn’t save Hogan; the Hulkamaniacs needed to begin to believe in a winner; the only prayer Hogan has is if Justice leaves the building and gets hit by lightning. This is a great promo, fiery and intense, with Justice hearkening back to the potential for this being Hogan’s last match as he claimed that it was up to him to decide whether that would be the case or not.

Dave Brown and Corey Maclin are at the CWA table as they introduced a segment of Coliseum clips, starting with Eric Embry versus Dirty White Boy. They do a brilliantly effective sequence in which the Dirty White Boy, who had busted Embry open, continued to punch away at his opponent, knocking out two referees and avoiding Jimmy Valiant and Tom Prichard who tried to stop the action. Embry was covered in blood, yet a comeback led to Eddie Marlin waving the fight back on. Unsurprisingly, the Dirty White Boy also got busted open, before Tony Faulk and Brian Christopher hit the ring to attack the Dirty White Boy. Valiant and Prichard returned to the ring in order to help Boy this time, leading to a brief six-man brawl. This was really good, primarily because the Dirty White Boy treated Embry the way a scorned man would do.

The clips continue as The Moondogs took on Jeff Jarrett and Jerry Lawler with what appear to be fans wielding chairs as lumberjacks. This gimmick gives free reign for Richard Lee to get involved, whilst the Moondogs take the fight to the lumberjacks at one point in the proceedings. With the lumberjacks knocked out and Lee interfering with impunity, the Moondogs were in control until Lawler dropped the strap as he was wont to do and inspired a face comeback. Just as it looked like things weren’t going the Moondogs’ way, Lee entered with flour and liberally threw it over everyone that moved. The clip cut at the point where Jimmy Valiant returned the favour on Lee and Lawler had landed a piledriver; the official result was a disqualification win for Jarrett and Lawler from the look of it. Wild brawl as always, with the lumberjacks and the flour at least adding a different wrinkle to a match I’ve seen many times now.

Moving to Smoky Mountain for some more segments at least unearths the gem that is Tim Horner singing ‘Shameless’. Forming part of a general piece about his credentials outside of the ring alongside his skills within it, this was surely aimed at giving him a bit more personality, but it is pretty much awful. I like Garth Brooks, but Garth Brooks just isn’t really cool.

Following a short Bob Holly promo that just explained his reasoning for not being in SMW Title Tournament – why beat three men when you can beat the winner? – we get one more attempt by Jim Cornette to reveal his new tag team. This time, a limo showed up at a secret location, only to be mobbed by another bunch of women and thus not unveiled. The promise from Cornette is that he will take the camera to the men, rather than the men to the camera next week. This was a simple little storyline that at least produced some engaging television.

Whilst a little light on the in-ring action, the various promos and interviews – especially those for Wrestlemania – have all been pretty good. I can’t imagine being a WWF fan in 1992 and not being excited by both the Savage/Flair and Hogan/Justice feud; the builds have been really strong. Check back next week for some WCW action from the 28th, before the matches take on a much more international flavour, including a huge Mask versus Mask match on That Was The Year That Was. 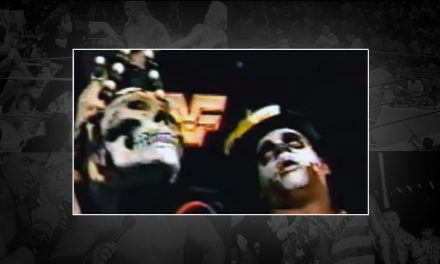