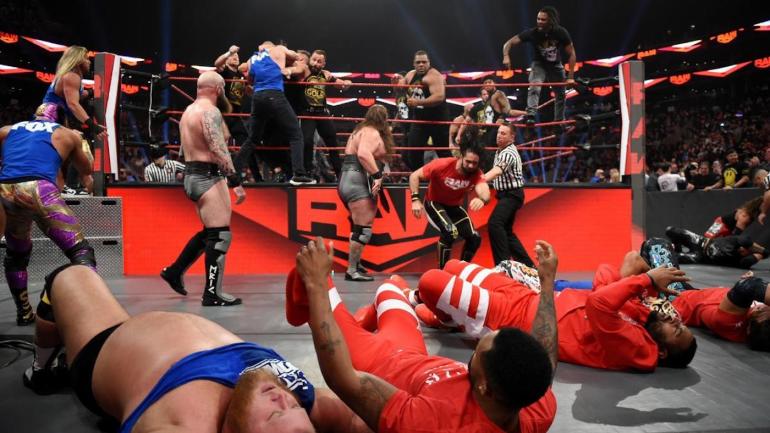 Joe Lanza: I can’t believe I’m doing free content, yuck. Brock doesn’t work TV matches, and a star like Joe Lanza shouldn’t be on the non-paywall page, but this is what happens when nobody else wants to preview a show where 15 of the participants are still unknown as of press time. My paywall content, of course, is tremendous. You should check it out at www.patreon.com/voicesofwrestling . Three price tiers to fit every budget. Get the $5 Tier, it’s the best value!

We’re off to a great start here, as I’m being asked to preview a match where one of the participants hasn’t been decided yet. All three potential opponents would produce excellent, but very different (well, as different as the WWE house style will allow) matches. Let’s take a look at each.

Killian Dain: This would be a fun match, but a WWE genpop crowd would have no idea who Dain is, and would full-on babyface Cole here, which I don’t think is something the office wants. Or maybe they do want that, as Cole could come off looking like a major star, and there are people very high up the ranks who very badly want him on the (real) main roster with a mega push. I think this is the least likely outcome, as Dain just doesn’t feel right for this spot.

Pete Dunne: This would probably be the best match, a good bet to steal the show, and I’m guessing this will be the direction they ultimately go.

Damian Priest: This is the outcome I‘m hoping for. While I won’t complain if we get Dunne, I think Priest, while making time in between shooting arrows and having kinky goth fetish sex, can become a big star. I’d like to see him in a big spot like this one.

Where are all of the people who insisted to me that “The Fiend” was over, as in really legitimately over, and on his way to being a new transcendent difference-making WWE star? Now that a few months have passed, after a comically bad PPV main event, a buzz-less title win in [redacted], and being the focus of two different brands that have both continued the pattern of declining ratings and interest, I can’t find any of you with a search party.

“The Fiend” is not a difference-making star, and not really a star at all. He’s been booked to be quite dominant, so this time, it isn’t because of incompetent storytelling or bad booking or any of the other usual WWE reasons. It’s because “The Fiend” is the kind of cornball shit that non-wrestling fans point to as evidence that wrestling is still lowbrow hillbilly entertainment, with the pseudo-intellectual Bray Wyatt comically thinking Firefly Funhouse is some kind of next-level parody brilliance, while most of us just laugh at him and not with him.

The in-ring is the same old boring Wyatt shtick, this time in a dopey Halloween mask while under very bad colored lighting for some reason. It’s beyond silly, it’s the classic “hope non-fans aren’t in the room while you’re watching” level embarrassing, and it will never ever appeal non ironically to anyone outside of the hardest of the hardcore WWE base, the types that lap up all of this kind of garbage. Not only has “The Fiend” failed to get over at a meaningful level, but there is collateral damage, as his feud with Seth Rollins also helped to put the final nail in Rollins’ main event coffin. Wyatt thinks he’s the Undertaker, but he’s actually Papa Shango. IT STINKS.

We’ve entered the BRAND SUPREMACY portion of the show, and this is one of a bevy of three-way matches to determine the SUPREME BRAND of WWE. What do you want me to say here? Last year, RAW won all of the matches, which meant…well, it didn’t end up meaning anything. There are no stakes, just lots of t-shirts, which is actually kind of helpful, because what kind of psychopath could possibly identify the correct BRAND of Sarah Logan otherwise?

The essence of pro wrestling, what good pro wrestling is supposed to be, is the creation of a conflict or story that triggers an emotional response. We’ve never been given a reason to connect to and then rally behind the RED or the BLUE or the BLACK WITH YELLOW LETTERING as our brand of choice. There is no babyface/heel dynamic, there is no distinctive style or overall feel that differentiates RAW from Smackdown, and because the brand splits are so loosely adhered to historically and reshuffled so frequently, there is no opportunity and no reason to form an emotional attachment to any of these dopey ass brands.

Perhaps if THE BIG DAWG or THE BOSS or any of the stars were synonymous with a particular brand after years of plying their trade with one, WWE would be able to cultivate brand loyalty among fans the same way fans are loyal to sports teams. The very first brand split was 2002, almost two decades ago, so there has been plenty of time to create this dynamic. But WWE storytelling is so skittish, impulsive, and reactionary, and has lacked any semblance of long term storytelling for so long, that sticking to a plan for more than a single PPV cycle is a massive accomplishment, let alone committing to something for 18 years. RED will win a few of these matches, BLUE will win a couple, maybe BLACK WITH YELLOW LETTERING will steal one or two, and on Monday, all of it will be forgotten as we move on to the next soulless and disposable WWE storyline of the month. This is why nobody cares about BRAND SUPREMACY and never will.

WWE is a promotion built around pavlovian responses to entrance themes, catchphrases, and signature moves. These are the only things that generate any crowd reaction, which is the self-fulfilled prophecy of empty meaningless BRANDS over substance and Stephanie McMahon’s “philanthropy is the future of marketing, it’s the way brands r going 2 win” tell on yourself trickle down. WWE almost never rewards you for giving a shit about anything deeper, and will usually punish you for doing so. It’s vapid, empty, shit, packaged in bright primary colors and weird internal verbiage that attempt to hide what it actually is, served up by a guy who has always been embarrassed by that reality. So explain to me why anyone watching has any incentive whatsoever to be invested in one of these colors.

AJ Styles hasn’t been consistently great for over two years now, a dirty secret that a lot of people simply refuse to accept. Nakamura just doesn’t care. Strong continues to be one of the best wrestlers in the world, so I kinda wish Nak would pull a hammy or something so we could see Roddy vs AJ, which would be our best bet at reviving vintage Styles.

While I’m using this preview for call outs, where are all of the absolute clowns who insisted we’d get The Big Payoff of Cedric Alexander winning the United States title from Styles? They must be hiding with the people who insisted “The Fiend” was going to be a game-changer.

Another t-shirt match, with one-third of it undecided as of Friday night. I have no clue how these 5 vs 5 vs 5 elimination matches are going to look. Probably bad? They feel like something Dragon’s Gate, Triple H’s favorite puro promotion, would do. Maybe that’s where they got the idea.

Look, I don’t have any more words left for two of these 5 vs 5 vs 5 things. Also, another TBA team, with only Ripley confirmed post-Smackdown. They don’t care, so why should I?

The Viking Raiders (Erik and Ivar) vs. The New Day (Big E and Kofi Kingston)  vs. The Undisputed Era (Bobby Fish and Kyle O’Reilly)

I’m fascinated by the finish here. I’d make a statement, and attempt to make a star, by having Baszler choke It’s Bayley out in the center of the ring. Lynch feels like maybe the biggest star in the company, so I wouldn’t beat her, and Bayley will be fine.

The build for this has been utterly fantastic, and I think No Holds Barred is a smart idea in terms of giving people reason to think Rey will use the pipe to win the match, since the last time we saw these two together, Rey gave Brock a pretty good beating with said pipe. I expect this to be good, because Rey is Rey, and Brock’s stuff always has an energy nothing else in WWE can match, and always comes across as different and special. But be warned, there’s always the possibility of involvement from Dominik and/or Cain Velasquez could muddle things and turn this into an overbooked mess. 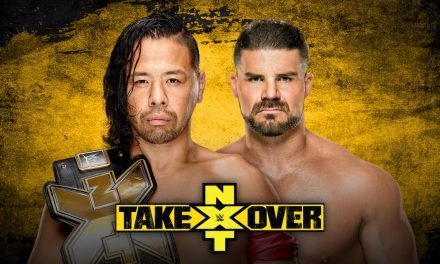