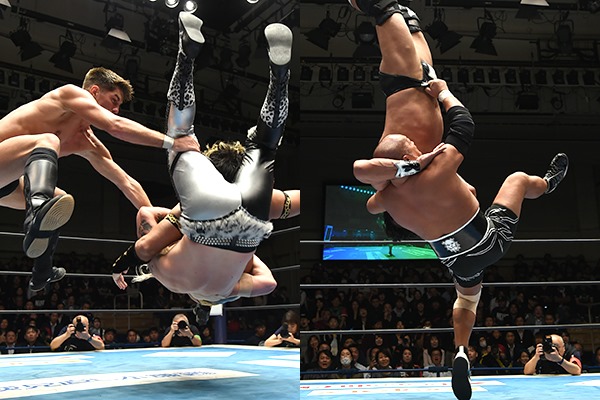 This was flat, boring and the opposite of the Goto/Fredericks match from the night before. Fredericks hit another awesome dropkick, I hope this becomes one of his signature moves going forward because it really is a thing of beauty. He, however, fell victim to a King Kong Knee Drop. I know its a team with a Young Lion and they’ll probably lose more than they win but shouldn’t Goto pick up some wins before most likely getting a NEVER title challenge? He’ll probably get 5 pins in a row now. The real story here was KENTA came out post-match and beat Goto up, furthering that feud. **1/2

Uh oh, this was not good and really kick-started what would be a hefty stretch of funk on this show. This set of New Japan Dads has the exact same match every single time, mostly because Nakanishi is so limited in what he can do and what his opponents can do to him. Their matches will get even more bleh as we are now getting to the house show single-cam matches portion of this tour. At least it was a hair under 10 minutes. **1/4

Another pinfall for my man Kojima! Extremely paint by the numbers tag match. I love how Kojima is racking up wins out of nowhere with the lariat, it’s going to make for a great near fall when they came up against a G.O.D or EVIL/SANADA. I have nothing else to say. Totally fine yet totally skippable. **3/4

This was up until this point the best match on the show, which was an issue and it was actually on its way to being good BUT I hated the finish so much. Lance Archer, who has been a killer all year hits Yano with the Blackout about to win but decides to go for the EDB Claw to really mess Yano up. Colt saves him, some bullshit happens and there are a low blow and roll-up. YUCK. I get Yano’s tactics are to piss you off so much that you make a mistake but I still hated it. **3/4

This was pretty entertaining. One of those matches where the final rating doesn’t actually reflect how easy and fun this was to watch. Admittedly, some people will hate this with every fiber in their body but c’mon, it was seven minutes and there were funny moments like: KENTA commanding Chase to lay down for him and KENTA apologizing to Chase before killing him. I don’t want to spoil all the bits because it’s worth watching. Chase is a great wrestler and we know that but he also has pretty good comedic timing as well. ***

I really liked this, maybe because this was a pretty bland show but this had some nice, crisp fast-paced action. I could go on and on about how great Ishii is and how Shingo is carrying his team to good matches but the story here is YOSHI-HASHI has been looking really good. Could the moist man be drying out? Here’s hoping! He’s looked fast, precise and shown plenty of fire – traits that are missing from 99% of his matches. He’s wrestling like he’s about to achieve something so he’s putting in the extra effort so it makes me wonder if the so-far undefeated Ishii/YH duo is actually going to win this tournament. ***1/2

Can we just et Zack and Taichi as a permanent team please? They are 3/3 match of nights, they look like a credible team and they have a very charming charisma and chemistry, Not to mention Dangerous Tekkerz is an incredible team name and Zack Mephisto as a tag finisher? *Chefs Kiss* This was very good and as great as Dangerous Tekkerz is, Finjuice can take a lot of credit too. Finlay and Taichi had a great back and forth in the closing stretch with some really great drama especially for a night three of the Tag League. The second or third best match of the tournament so, I recommend watching. ***3/4 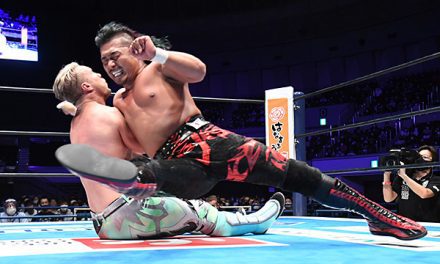 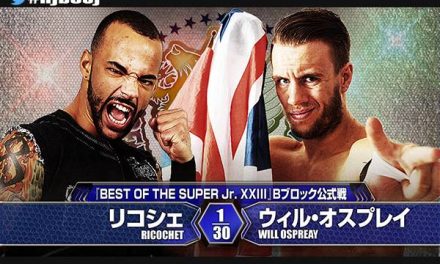 NJPW Best of the Super Juniors Night 6 (May 27) Review