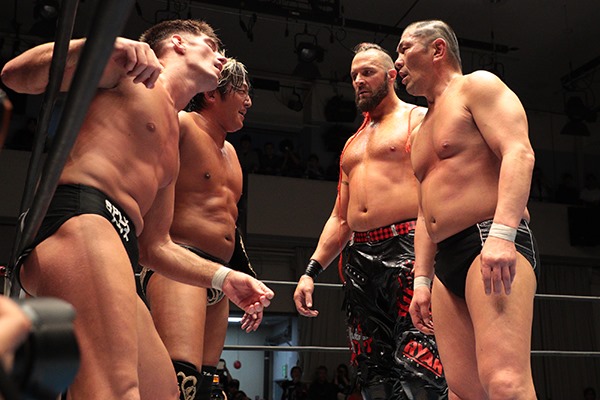 If you ever need to heat up a pretty cold tour, book some shows at Korakuen. Unsurprisingly this crowd was hot for pretty much everything and this was a really good match to kick things off. I think every review for this tournament is going to read like a love letter to Satoshi Kojima, he rules! Facials, selling, fire – he just gets it. It is an injustice that he’s not going to get a G1 farewell. I love that in the two openers, Finjuice has had competitive matches but they haven’t really been pushed to their limit yet reaffirming that they will indeed be very much alive come the final night. The stunner into the Pulp Friction finish is a cool death finisher but I would like to see Finlay reestablish himself and continue to establish his Acid Drop finish, which is an incredibly minor gripe, however. ***1/2

Guess what? this was bad! slow and imprecise. I no longer want to watch these guys wrestle. I think the integrity of World Tag League would survive if you excluded these two teams. I’m going to stop talking about this match now and talk about the other matches on this show that were actually good. **

In my preview, I ripped this Bullet Blub team pretty hard. Two matches in and they’ve had pretty decent matches, a testament to Chase Owens but shockingly Fale has pulled his weight. Henare and Chase were great with each other here, it’s great to see two undercard guys who are great get some spotlight. Tanahashi remains Fale’s best opponent and did some cool things again. Chase surprisingly gets the pinfall on Henare with the Package Piledriver. ***1/4

Well, go watch this one. I said this was a match to watch in the preview and it delivered. The only negative about this is that Super J Cast’s Joel Abraham can officially put Shibata Watch to sleep – we’re getting Goto/KENTA at the dome but if Goto is going to look this cool and badass in the build and in the match sign me up! Karl Fredericks is a lock to be a star and I don’t know why he’s still wearing black trunks, he’s 29 and more than ready to be shipped off on excursion. He hit a dropkick in this match that would make an Okada dropkick blush. KENTA was such a great prick in this match and not the typical Bullet Club cheap heel heat prick, little tough guy that knows he can beat you up and will beat you up with a smirk on his face. The G’s in World Tag League stand for Goto. ***3/4

A fresh G.O.D coming in for their first match of the tournament, how would they go? perfectly fine match. Colt looked pretty good and got the upset win with low blow from Yano and superman pin combo. Tama Tonga countered a Colt Bionic Elbow with a Superman punch – what a heel! **3/4

Am I dreaming? Another really good match!? get outta here. Cobb looked so good in this match, tossing everybody around like rag dolls, this is what he should do all the time. He and Ishii have great chemistry and are kind of alternate reality versions of each other. This might be the best “Mad” Mikey has looked in New Japan so far and the moist man himself – YOSHI-HASHI was pretty good. I know I said it last year after the first few shows and I turned out to be wrong but is the World Tag League good? ***1/2

I honestly don’t think there has been a better heavyweight tag team match in this company all year. I said this was a match to watch and boy did this rock. Suzuki getting in Taichi’s face, why? who cares it ruled! Suzuki’s facials were incredible, there was one part where Zack and Taichi were digging their boots into Suzuki in the corner and the face he was making was amazing. Zack showed some guts and had a strike off with his boss which got a great reaction from the crowd and earned the respect of Suzuki. The finish came with Zack and Suzuki trading flash pin near falls before Zack finally got him. They all bumped fists at the end as the Suzuki-Gun group theme played. Awesome. ****1/4

The story in this was simple but great. The actual tag team who won this tournament twice and are former champions toying with their stablemates who have never teamed before. Shingo’s individual brilliance kept his team in it as Terrible was well…not good in both story and in-ring work. EVIL and Shingo had some great collisions and SANADA was his athletic self. EVIL and SANADA came off like the biggest deals as a tag team tonight and that’s because they’re well-pushed singles and their team is pretty protected, funny how that works. Not quite as good as the semi-main but still really good. ***3/4