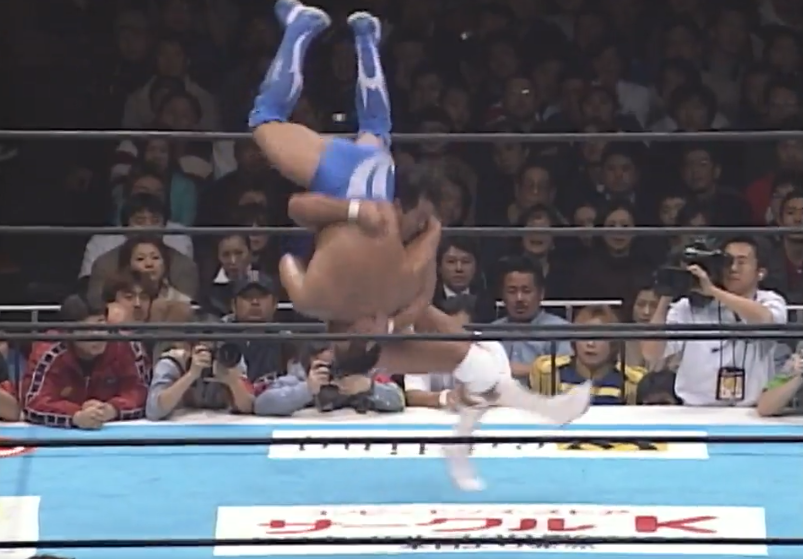 Hi there wrestling fans! Let me begin by saying it is wonderful to see all of you again, especially on such a cold day. Luckily nothing is better for fighting frigid temperatures than getting cozy under a warm blanket and peering into the NJPW World Archives for this week’s edition of The Lion’s Vault.

Today we will begin our adventure by turning to a new chapter of our Jushin Thunder Liger tribute, as we watch him take on the dastardly Norio Honaga for the IWGP Junior Heavyweight title. From there we will travel to 2002 to witness NOAH’s GHC Heavyweight Championship being defended in a NJPW ring for the very first time.

And best of all, I can promise that there will be no Frank Monte matches this week. 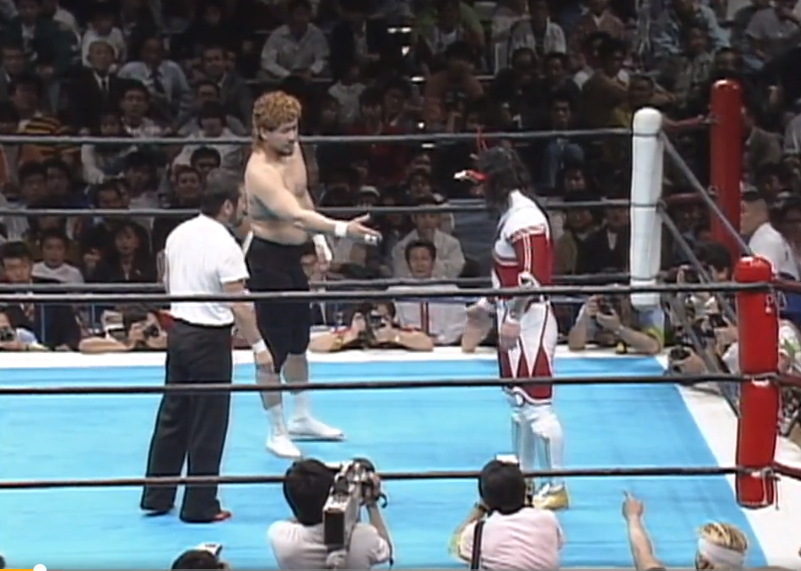 Spoiler Free Teaser: It’s the finals of the Top of the Super Juniors tournament, as Liger tries to reclaim the IWGP Junior Heavyweight Championship as he faces an underdog Norio Honaga. What we end up with is a well-worked finals where Liger is his usual tremendous self, and Honaga takes advantage of his opportunity to look like a star as he searches for a way to defeat his legendary opponent. ****

We are starting off with a match for all of the proverbial NJPW junior heavyweight marbles, as not only is this the finals of the second-ever Top of the Super Juniors tournament, but is also for the vacated IWGP Junior Heavyweight Championship, which Liger willingly gave up prior to the start of the tourney so that it could be awarded to the eventual winner. This is the second match of the night for both competitors as earlier Honaga defeated Pegasus Kid in one semi-final, while Liger advanced past Negro Casas (unfortunately neither match is currently available on NJPW World). While Liger was looking at the tournament as a way to cement his status as the dominant junior in NJPW, Honaga entered the tournament as a happy-to-take-shortcuts heel who felt that he had been overlooked for years.

As we move to ringside we see that Honaga is accompanied by his Blond Outlaws stablemates (Tatsutoshio Goto, Hiro Saito, and non-Blond Outlaw, but best friend forever Super Strong Machine), who were the Umanosuke Ueada inspired “blond hair Japanese brawlers/rule breakers” of their time, a tradition more recently carried on by Toru Yano. With that context in mind the match begins in a surprising manner as Honaga offers a respectful handshake to start, and then quickly gives Liger a clean break on the ropes…both of which the crowd cheers…and in fact, the fans seem to largely be behind Honaga. The early stage of the match is largely a clean grappling contest, with Liger managing to stay firmly in control without much struggle. After nearly eight minutes of action, the tide finally turns when Liger misses a dive to the outside, and Honaga lands a number of big moves, including a short powerbomb onto a table that fails to break! Back in the ring and Honaga, perhaps showing his frustration about being outwrestled by Liger, decides to embrace his natural heel tendencies and begins to rip at Liger’s mask. Despite this change in tactics the crowd continues to cheer for the underdog Honaga as he hits a series of high impact moves.

Eventually, Liger stops Honaga’s extended run by dropkicking him off the top turnbuckle, and then superplexing him back into the ring. Back and forth action now as both men are taking more risks trying to secure the victory, including a beautiful belly-to-belly suplex from Liger for a nearfall. Sensing that Liger is starting to get the better of the exchanges Honaga switches gears again by looking for flash pins, while Liger continues to focus on high impact moves, and the fans are biting on every nearfall for each competitor. Eventually, the two end up fighting on the top turnbuckle, and Honaga counters another Liger superplex attempt with a well placed low blow that sends Liger crashing to the mat. Honaga follows him down with a top rope lariat for…just two! Running lariat for two. German suplex for two. Finally, a cross-arm German suplex is enough to earn the win, the tournament, and the championship for Honaga.

Match Rating **** – Great match that felt like the climax of a tournament…and that is without the benefit of seeing any of the earlier matches. While Liger was stellar in the match, I would really like to single out Honaga for praise first. The way that Honaga worked the match, from wanting to prove himself as a wrestler, to falling back on his”outlaw” tendencies, to just doing whatever it took to win…from flash pin attempts to low blows, made for a fun thread to follow through the match. Additionally, while Honaga wasn’t always a stellar in-ring wrestler, his offense and selling were both great throughout this match. Finally, Honaga was fantastic when it came to keeping the crowd into the match and bringing them along for the ride, which definitely added to the big match vibe. Of course, Liger deserves credit here as well as he was able to showcase that he was the better wrestler between the two competitors, while still allowing Honaga the opportunity and time to look credible throughout the match…which played directly into the story as in the end it turned out that Honaga was able to find a way to win despite Liger’s superiority.

So in addition to having two great wrestlers in their respective wrestling primes (though to be honest, until the past year or two when hasn’t Akiyama looked to be in his prime?) this match is interesting because of the larger context around it. For starters, it is a NJPW Tokyo Dome main event…for NOAH’s GHC Heavyweight Championship (IWGP Heavyweight Champion Kazuyuki Fujita was not on the card, I believe due to an injury). For much of 2001, Nagata looked to be the up and coming star for New Japan, but then less than a week before our match he got his head kicked off by MMA star Mirko Cro Cop seconds into a MMA bout at Inoki’s Bom-Ba-Ye 2001 show. As for Akiyama, he entered the match as the champion of what was probably the hottest promotion in Japan at the time, but was still in the midst of an uphill struggle to be seen on the same level as the legendary NOAH promotion mates Mitsuharu Misawa and Kenta Kobashi. The match also represents the first time that the GHC Heavyweight Championship was being defended outside of a NOAH ring, and as of this writing one of only three times it has been defended in New Japan.

As we go through the in-ring introductions one cannot help but notice that Nagata receives a relatively muted response (perhaps in part due to the Cro Cop loss?), while Akiyama gets a warmer reaction from the crowd. Similar to our previous match, we begin with a long grappling dominated opening to the match, but unlike the previous match the crowd seems much less engaged with the action. That said, the fans do come alive for various strike/bombs exchanges, but to be honest most of the first half of the match comes across as fairly pedestrian. We finally seem to switch gears with a fast paced segment that ends with Akiyama first teasing an exploder suplex off the ramp, and then delivering an awesome DDT onto the ramp. Following up on the DDT, Akiyama begins to work over Nagata’s head and neck, including catching Nagata in his own Nagata Lock III in a fun spot. Nagata kindly returns the favor with a more vicious-looking application of the move, but Akiyama is able to make the ropes.

We progress to an intense strike exchange as the crowd starts to rally around Nagata, but a big brainbuster gets Akiyama a nearfall. Akiyama continues to control, but then in what could be considered a Cro Cop callback, Nagata lands a high kick for his own nearfall. Moments later Nagata connects with his patented backdrop hold…for just two as the announcers absolutely lose their minds at the kick out. After shaking off his disbelief, Nagata looks to finish things up, but Akiyama catches him with Misawa’s Emerald Flowsion to a big crowd reaction and both men are down. As they make their way back to their feet Akiyama is able to hit an exploder for two, and immediately follows it up with his wrist-clutch version for the victory!

Match Rating ***½ – So this ended up being a good match that included well-executed wrestling, some fun spots, and got the crowd into it by the end. Yet at the same time, the match just felt like it was lacking in some ways, especially for an interpromotional main event in the Tokyo Dome. Some of that definitely came from the lack of crowd response for much of the early to middle portions of the match, but even when the crowd got into I still felt like there was a lack of cohesion connecting some of the more interesting spots to each other. In some ways, this feels like an interesting comparison to the Liger vs. Kuniaki Kobayashi match that we reviewed a few weeks ago. In that case, I felt the ringwork was elevated by what the wrestlers were able to accomplish in the spot and situation they were given, while in this case, I feel like the work does not quite reach the level of the opportunity given, and that unfortunately detracts somewhat from the match. Don’t get me wrong, this is still a good match that offers a fairly interesting lens into the direction of NJPW at the beginning of 2002, but in the end I just don’t think it’s a great match, which is disappointing.

Well even though we ended up things with a match that felt like it under-delivered, I have to say that this was still a rewarding journey back into NJPW’s history. When we come back next week we will have another Liger tribute match where he busts out his all-white outfit variant to take on another rival, and we have the unadulterated joy of watching a true tag team hoss battle. Until then you can check out our Guide to The Lion’s Vault to see all of the matches that we have featured, and thank you and happy wrestling watching to you all!