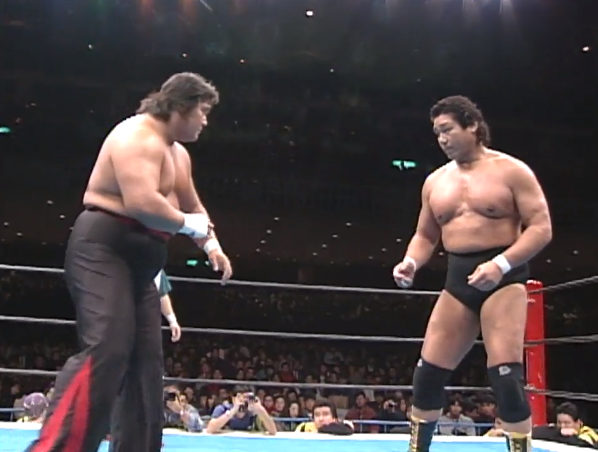 The Three Musketeers of New Japan Pro Wrestling have long been a partial blind spot for me. I knew Masahiro Chono from his time in WCW and a biker-adjacent aesthetic that’s difficult to forget. Keiji Mutoh is the most immediately accessible—he still gets in the ring from time to time and his influence is everywhere, even down to the way he bleeds. The two were also opponents in the first G1 Climax final, a match that I adore. I get these two.

It’s Shinya Hashimoto—arguably the biggest star of the three in their primes—that I’ve had the toughest time with. I’ve dug around forums and match lists searching for the bout that would make it all fall into place. It’s like when I first heard the band Fugazi. They seemed a little too dense and abrasive initially but I didn’t want to be left out, you know? I wanted to get this thing that everyone else loved. Then one day you’re sitting in a friend’s car staring blankly out the window and midway through “Smallpox Champion”, it just clicks. I want that.

Much is made of Hashimoto’s appearance. Not only for his body type, atypical of wresters in that era (or any era really), but also its presentation. As the story goes, Hashimoto’s sent on excursion to Memphis in 1989, wrestling for the USWA under the name SHOGUN. After a visit to the Elvis Presley museum, he becomes quickly enamored with The King and by the time he returns home he resembles something akin to a Japanese Fat Elvis, sporting the signature sideburns, headband, bellbottoms and gut. Still, I can’t help but feel like we’re missing the mark when we matter-of-factly tether the two, and maybe that’s where my disconnect starts. When I watch Shinya wrestle, I see John Belushi, and I see it more and more the deeper I look.

It almost seems like the two would have been fast friends. Maybe Hashimoto would have appreciated Belushi’s take on “Jailhouse Rock” in the closing scene of The Blues Brothers. Under the guise of Jake Blues, Belushi was able to sidestep into a separate passion for music that he’d chased since playing drums in high school bands that wouldn’t let him sing. The specter of Graceland could still have been hanging over Hashimoto when he released an album titled Rock Up in 1996, while already a multiple-time IWGP champion, to less success. Belushi was also an early champion of punk rock, though. He famously returned to Saturday Night Live to make what would be his final appearance in 1982, in order to get the band Fear on the show. Trying to recreate an authentic Fear live performance, Belushi arranged for a caravan of seasoned slam dancers from Washington, DC to travel to Rockefeller Plaza for the taping by placing a call to a twenty-year-old Ian MacKaye, then the singer of hardcore band Minor Threat. Predictably, the whole thing is a total shitshow; Fear is promptly banned from SNL, five years later Ian MacKaye starts Fugazi.

When he was a regular cast member on Saturday Night Live, John Belushi had a recurring character named Samurai Futaba. In each sketch, a katana-wielding Belushi in full samurai garb takes on a different profession (bellhop, optometrist, baker, etc.) opposite Buck Henry as his patron. He screams, destroys property with a sword, threatens seppuku, and in the end does each job with competence and precision.

In the grand Japanese wrestling tradition of two people hitting each other as hard as they can, he is a titan. His reputation for delivering kicks to foreigners so stiff they’d scurry back home earned him the moniker of The King of Destruction. Around the ten minute mark of this match, he delivers a mid-kick with all the grace and swiftness of Bluto Blutarsky breaking a beer bottle over his own head; the sound it produces makes a crowd of 11,500 in Sumo Hall gasp. The guy looks like he just swung by to fix your garbage disposal and he’s the King of fucking Destruction.

Genichiro Tenryu’s most famous match might be a June 5th, 1989 AJPW Triple Crown match against Jumbo Tsuruta. Meltzer gave it five stars, and it’s deserved. It’s an epic that some credit with setting the tone for the Misawa-era main event style to come.

My main takeaway though, is the way Tenryu and Tsuruta are slapping the shit out of each other even on the most inconsequential transition strikes. You know that double axehandle to a guy’s back as he stands up that you hardly even notice? Half the time the recipient hardly even bothers to sell it. In that match, Tsuruta lays a few in so hard I almost called the cops thirty years later. Tenryu spends a rest hold portion punching Jumbo’s knee for half a minute, and lays a set of enziguris into the back of his neck that makes my fingers feel numb. Naturally, when I found out about Tenryu’s series of matches with Hashimoto I came running – to top off the myriad of titles held over his career, perhaps Tenryu was also my Smallpox Champion.

By this point, five years later, Tenryu has transitioned from the hungry-underdog-in-wait that faced Jumbo to the grumpy old man he’d come to be recognized as. When he performs his signature slap rush he seems more annoyed than inspired. The two wail on each other for fifteen minutes at a pace that belies their waistlines. The only reprieve is actually my favorite spot in the match: referee Tiger Hattori pulls Tenryu off of Hashimoto in the corner, only for Shinya to get up and throw a belligerent lunging kick over the official, essentially flinging his body at Tenryu like a weapon. Actually, that’s how I’d describe most of the offense here, like those Tenryu enziguris that somehow benefit from his diminishing ability to get off the ground and land them. On the rare occasion they do implement a more traditional wrestling hold, it’s delivered haphazardly at best, like the physical expression of telling someone to get the fuck off of you.

In a 1977 SNL sketch, Belushi stars as a decathlon gold medalist in a parody of the old Wheaties commercials. Marv Albert does the voiceover while Belushi completes the high jump (a very funny edit) and breaks a world record on the track. The punchline is that he’s promoting Little Chocolate Donuts. “Little Chocolate Donuts have been on my training table since I was a kid,” he says to the camera before grabbing one and taking a bite with the same hand he’s holding a cigarette in.

This is Hashimoto too.

We all know about Belushi’s substance issues. In a 2009 shoot interview with Sean Oliver, Big Van Vader himself says he had a hard time respecting Hashimoto because of how much he would smoke and drink. To put this in perspective, this is the same Vader who had to be babysat on the road by Harley Race and once got rung up for public intoxication after threatening to fight the K-9 unit dogs. As a former smoker and newly disciplined drinker, this strikes a chord with me far more resonant than prayers, vitamins and 27-inch pythons ever did. Do we not live vicariously through our heroes?

This is starting to sound bad, I should explain: After Fear, the next group to be banned from SNL was The Replacements in ‘86, for getting too drunk and dropping an audible F-bomb live on network TV. In 2014, they reunited for a run of well-received shows, their first in twenty-three years. The Replacements mean the world to me and existed mostly before my time. I went to the date in Forest Hills, NY and was surprised at the composure I kept while they faithfully recreated some of my favorite tunes of all time as if they’d never stopped. Then, it happens: bassist Tommy Stinson introduces a song and turns around to find the band not kicking in, but rather all lighting cigarettes, and I feel a hot tear run down my cheek.

I react to this sort of thing the same way I did at ten years old while Steve Austin was making one-handed catches of beers tossed to him from fifteen yards out, when I hardly even understood beer as a concept. I can’t help it. I know as a full-grown adult that this is stupid; I know it is the same objective part of my brain that understands that two dudes flopping around simulating a bar fight with spin kicks isn’t some sort of high art no matter how many words I type about it. In either case, we reach the same conclusion: regardless of age, experience, or any degree of posturing, at my core I’m still a slack-jawed idiot, and I can’t help what I love. And I love this wrestling match. I love that the finish comes when Hashimoto finally decides to duck out of the way of a Tenryu slap, freeing himself up for a clean overhead belly-to-belly followed by a jumping DDT he barely stumbles into. I’d follow this man anywhere; I get it now. History rears up to spit in your face.

That said, the unfortunate final parallel between Belushi and Hashimoto is how much of their work we may have missed out on. They both died young, Belushi at 33 and Shinya at 40. I’m hesitant to point to a silver lining in regards to a life ended prematurely, but they’re each forever crystallized as the image of what they were at, or near, their best. Neither had the opportunity to age into a Jim Belushi for example, growing a goatee and hanging around as long as humanly possible. 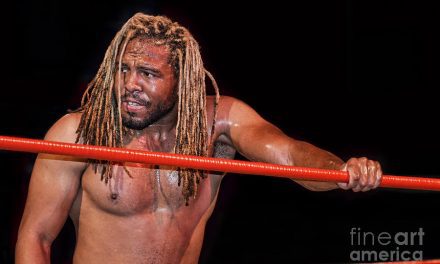 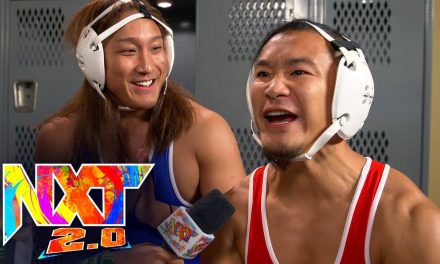