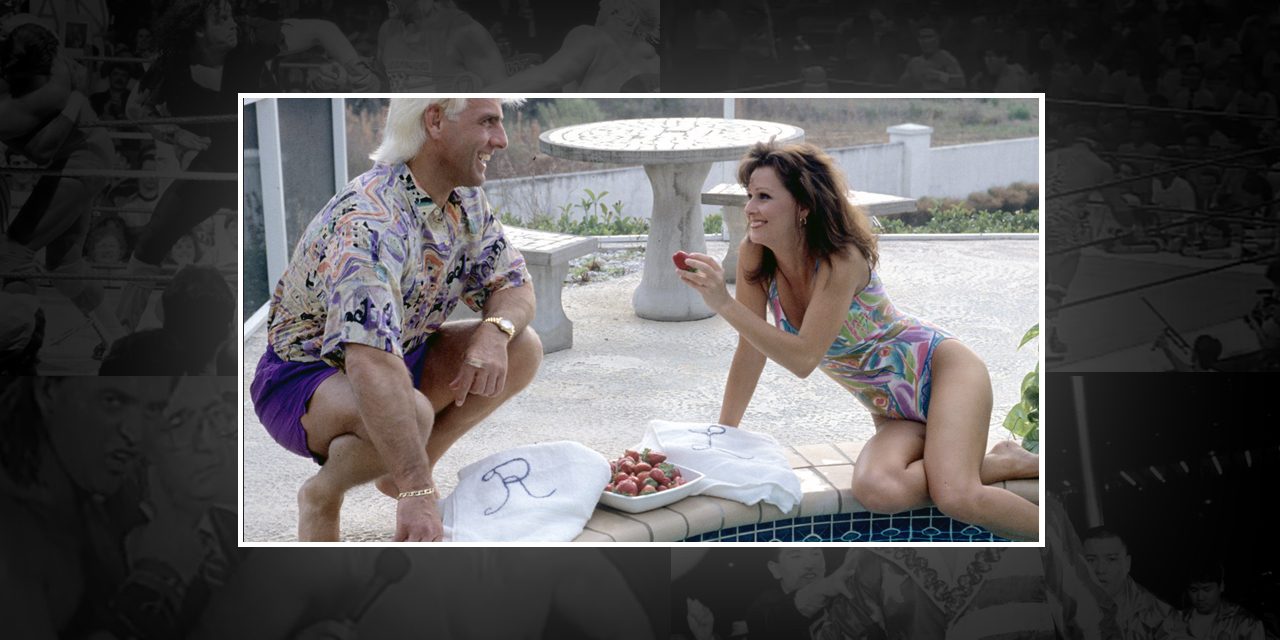 With WrestleMania rapidly approaching and the weekly exploits of Memphis and Smokey Mountain Wrestling to factor in, this is a promo heavy edition of That Was The Year That Was, topped off with a huge clash for the IWGP Heavyweight Tag Team Titles. With that said, there is still plenty of gold to be had as some of the world’s best talkers at this time get their time in front of a microphone.

The shill is on for Wrestlemania as Mean Gene Okerlund joined Ric Flair and Mr Perfect in the heel locker room. This was the reveal that what Flair knew that Randy Savage didn’t – that the Nature Boy had had a previous romantic relationship with Elizabeth. The WWF Magazine was put to good use here as it was where the incriminating photos, ones that would have Liz’s palms sweating, were showcased, including Elizabeth by the pool in a bikini. Flair called her ‘damaged goods’, though promised that if she dropped the dime and made the call, he’d be there. With such a short time to get a feud going between these two, going this direction is perhaps low hanging fruit, but it definitely works.

Another feud that continued to simmer was that between Sid Justice and Hulk Hogan. Justice was now accompanied to the ring by Harvey Wimpleman to give yet more reasons for him to be hated. Sid read out a letter from a Hulkamaniac who wanted to know why Sid turned his back on Hogan and destroy Brutus Beefcake’s Barber Shop? Apparently, if you are a friend of Hogan, you can’t be a friend of Sid. Someone who definitely isn’t a friend of Sid’s is Micky Jay who gets beaten in short order, whilst an attempt to stretcher him out was halted by some further beatings. Sid just killing jobbers is money television, so this was great.

Hulk Hogan himself isn’t present in anything of note from this show, yet the collection did include a quick advert for the Hulk’s vitamins. Clocking in at around ten seconds only, it showcased Hogan helping some kids in a play area and at least avoided the pretentiousness of his previous assault on the advertising world.

The Moondogs versus Jerry Lawler and friend feud continued unabated as Koko Ware ended up standing in for an injured Jeff Jarrett. These were highlights of the action, starting with Ware taking on Kamala, a match that ended when Moondog Spike attacked for the DQ. Notably, a wayward trashcan shot off of the top rope hit Kamala rather than Ware. Segue to the main event, Kamala hit the ring to return the favour, blasting Spike several times with a big wooden door. The match had apparently finished by this point with the Moondogs the winners, yet they looked less than the victors by the time Kamala, Ware and Lawler finished with them. Kamala was always a case of the law of diminishing returns, so a turn made sense to get some more longevity out of the run.

Switching to the other significant feud in the Memphis area, Eric Embry was unhappy once again with Pat Tanaka as Tanaka went ‘crying’ to Eddie Marlin to complain about Embry hitting him with a trophy. A no-disqualification match had Embry crowing that he had been taking tips from the Moondogs, before listing a raft of weapons that could be legal – a bit of tree, a chain, a golf club and a shovel. Stoking the flames even further, Embry claimed that when he had finished with Tanaka, he would tell Dirty White Boy about what was going on between Tanaka and the Dirty White Girl.

Multiple clips followed from an episode of Smokey Mountain Wrestling as Rip Rogers proclaimed himself the fittest athlete in sport to start the show. This leads to a show long angle where he, having bet with Tim Horner $500, would complete squats for the whole show. Against this backdrop of Rogers doing his squats, we get great segments such as Bob Armstrong remonstrating against Ron Wright for the latter’s interference in a match between Bob Holly and Tommy Angel, the altercation between the two men ending when Armstrong wheeled Wright away. Another solid moment was Jim Cornette continuing to keep his cards close to his chest in terms of his new tag team, worrying that their announcement could throw the whole world into disrepair as no teams would show up. Finally, Rogers neared the end of the show having done squats the whole way through, only for Horner to kick the chair that was being used for support out from under the heel. This simple, show long angle is a lost facet of wrestling it feels, which is a genuine shame.

The segments continue to come thick and fast in a wrestling-light stretch as the fallout from Superbrawl was explored by Eric Bischoff and WCW Magazine. Initially, the focus was on Terry Gordy and Steve Williams joining the promotion, with DDP of all people dismissing the hedging by Bischoff and the dilly-dallying of Kip Frye as it can be taken to the bank that both men were coming in. More importantly was an altercation between Rick Rude and Sting, Rude and the Dangerous Alliance crashing the Superbrawl afterparty. A thrown drink by Rude after Sting refused to join in a toast led to a wild brawl. Humorously, considering the people who are being pushed in WWF at this time (and at least one of the people delivering them), these segments also are interspersed with ‘don’t do drugs’ promos from Brian Pillman and Arn Anderson in what felt like broadsides at the opposition as much as anything else.

One last segment aimed at driving people through the turnstiles for WrestleMania VII involved Jake Roberts with Mean Gene Okerlund as he showcased once more why he was considered one of the best talkers in the business. After quoting ‘Shakespeare’ as he pondered what a tangled web we weave, Roberts went dark as he talked about the chairshots as foreplay and how he’d win a gold medal at the Winter Olympics at clubbing seals. Undertaker professed to have a dark side, but Roberts claimed he walked hand in hand with Satan everyday, promising to crush Taker’s skull like a vulnerable seal before cremating his opponent alongside Paul Bearer to boot. Just a great promo that was really dark, especially when positioned opposite the more colourful characters and gimmicks the promotion ran with at the time.

The last match of this week saw Masahiro Chono and Shinya Hashimoto put their differences aside to meet the IWGP Tag Team Champions, Big Van Vader and Bam Bam Bigelow. This match suffered for pretty much the exact same reason a lot of the New Japan stuff has this year – the match is too long; the pace is too slow. That is not to suggest that this is a bad match, but close to twenty-seven minutes just felt that it cost the match in the long run. It also meant that it never fell into a rhythm; a long heat section building to a hot tag would have been excellent, though perhaps I’m just pressing my own sensibilities about tag team wrestling onto a match that was unlikely to ever be that way.

Chono’s initial big shots on Vader, including a back suplex and a top rope shoulderblock, at least set the tone that the natives had to go big to defeat the champions, whilst there was often a sense of desperation about the offense of the challengers as one big move often set them back. A perfect example of this was Chono winning an enziguri battle with Bigelow, only to be dumped by a Samoan drop immediately afterwards. A neat spot saw Chono halting a Bigelow suplex with a kick, allowing Hashimoto to turn it into a DDT instead.

In the closing stretch, the feeling of attritional warfare was engaging as the challengers launched everything at their foes, including a Kenka Kick/spinning heel kick combination on Vader. An STF by Chono was even applied, yet it was on Bigelow at ringside. As soon as Vader began to power back, it truly felt as if the window had closed and it was only a matter of time before the champs retained. Hashimoto ended up dumped out of the ring by a Vader tackle, the champions landed a double splash and Bigelow ended it all with a top rope splash for three. Condensed, this could have been golden.

A segment heavy article this week, with particular plaudits going to the work of Jake Roberts in the build-up to his match with the Undertaker and Sid in his genuine attempts to kill Micky Jay, or so it seemed. Check back next week for more action from 1992 as That Was The Year That Was continues.