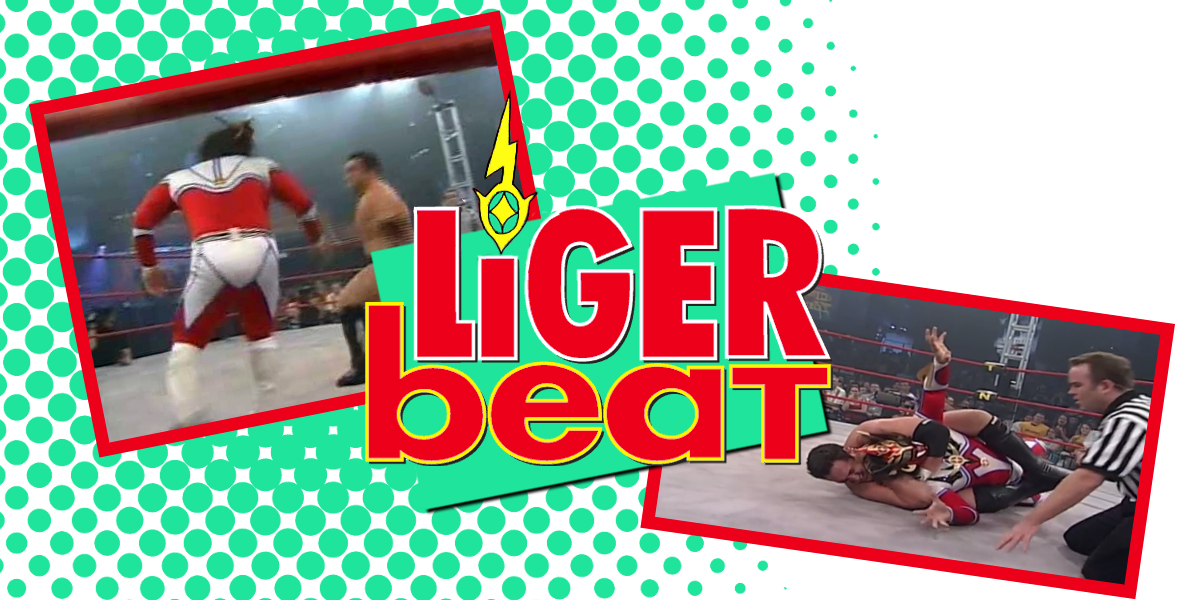 Finding entry points in any media is hard. Unless you can get in on the ground floor of something new just as it launches, you’ll inevitably have to find your way into a web of stories, characters, abandoned plots, cultural differences, traditions and history that you simply don’t understand. That’s why you get so many “Which Zelda game should I play first?” (Ocarina of Time) or “Which Star Wars movie should I watch first?” (Star Wars) questions. Looking from the outside at all these things can be pretty terrifying.

Jushin Liger’s 2005 Bound For Glory match with Samoa Joe was my entry point to Japanese wrestling.

15 years ago it was a great deal more difficult to keep track of  New Japan. Even as wrestling began to become available online, it was still weeks or months after it originally aired and, of course, in Japanese. This was long before New Japan began producing English commentary for even their big shows, nevermind all their shows. I certainly can’t claim to have gone through the struggle of trading tapes to get my Japanese wrestling fix, but it sure was harder to keep up with than it is today.

Bound For Glory wasn’t my very first introduction to Liger funnily enough. That was via a commercial break on the old Wrestling Channel in the UK. Not through a great Liger match or an awesome New Japan show. A commercial break. And even then, it wasn’t due to something Liger did in that commercial but rather his amazing theme song that played over it. I used to watch the Wrestling Channel just to see that commercial and hear the theme song (this was pre-YouTube in like 2004 and 2005, a desperate age where you used to have to rely on something airing on television to see it again rather than watching whenever you’d like). Again, you take any entry point you can get.

So by the time I was making my way through the early days of TNA history (I started watching TNA at the end of 2006), I knew who Liger was. When I popped in the Bound For Glory 2005 DVD that I got in a Don West Brown Bag Special and saw the opening match of Samoa Joe vs. Jushin Liger I was captivated.

The match itself was nothing special in hindsight, cut short by miscommunication it felt special not really due to the action but due to the two wrestlers involved. This was Samoa Joe at the peak of his powers. The dominant and destructive powerhouse that felt like an unstoppable monster, he projected the aura of an unbeatable killer. He was one of the best wrestlers in the world and he knew it. He had that kind of confident swagger.

Contrast that with Jushin Liger, who carries a distinctly different aura. Even by 2005, Liger felt like an all-time legend. A beast god descending from the heavens to grace the opening match of TNA’s equivalent of WrestleMania with his presence. His bright, colorful red and white bodysuit, his striking and impressive mask and yes, his absolutely amazing theme song – 15-year-old Garrett suddenly saw the light. This guy had that commercial devoted to him for very good reason! Fans threw streamers for Liger – something that only happened a handful of times in TNA history.

From there following Liger’s antics in the New Japan Jr. Heavyweight division introduced me to the likes of Prince Devitt, seeing an Irish wrestler in a prominent role in a major wrestling company was so exciting for me, as well as Kota Ibushi, one of my favorite wrestlers of all time. While TNA didn’t always have the best record with New Japan stars, I still got to see the likes of Tanahashi, Goto, Tiger Mask, Naito and Okada for the first time there. The Global iMPACT! special that TNA aired on Spike TV, where I personally fell in love with Yuji Nagata after his match with Kurt Angle, was the first time I watched a WrestleKingdom. That entire relationship, for all it’s ups and downs, started with Liger at Bound For Glory.

It might seem a little strange to celebrate Jushin Liger’s career by writing about a random match from TNA, far from one of the best matches of his career. But that match represents for me something countless Liger matches likely represent for others. It was my way in. Whether it was Liger vs. Pillman at Superbrawl in 1992 or Liger vs. Pillman in the very first match on Monday Nitro, whether it was a Liger match on an ROH War of the Worlds tour or even Liger vs. Tyler Breeze in NXT or simply his Bound For Glory 2005 opening match — Liger has likely been countless people’s way into a whole new world of wrestling.

Liger transcends language and geography, he connects on a visual and aesthetic level like few others and he’s one of the best pro wrestlers of all time. It’s little surprise he’s connected with so many people around the world, connecting the world as he did it.