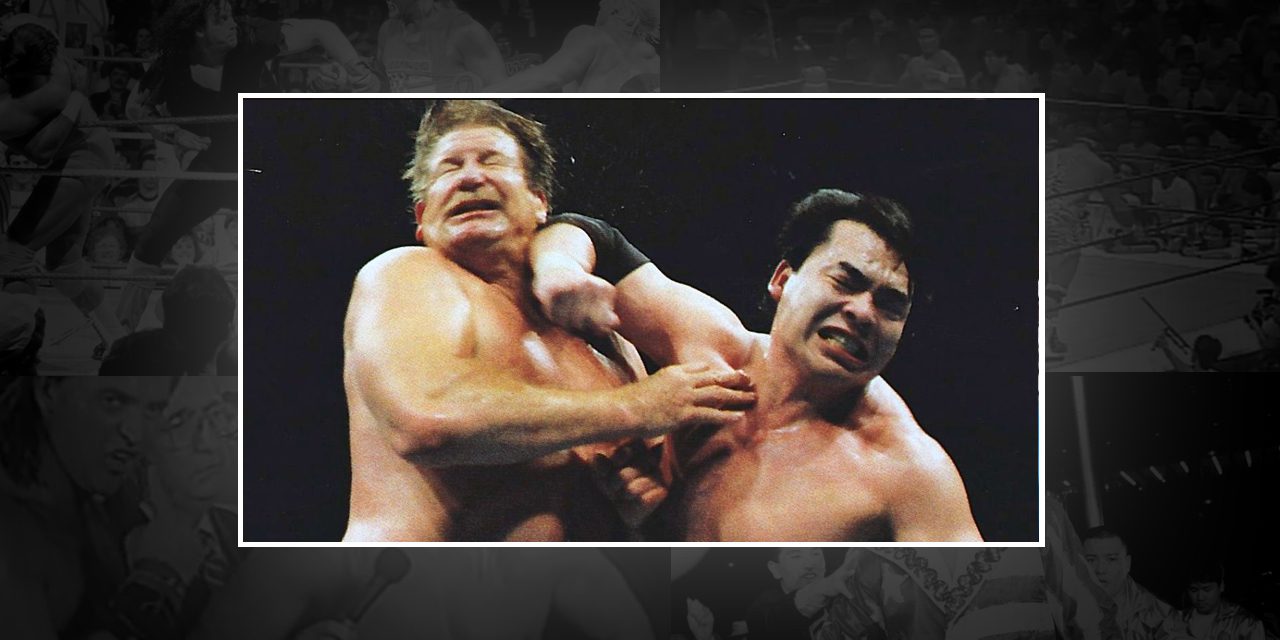 In terms of comfort zones, this is a rather large departure as lucha and shoot fighting sit alongside puro as this article takes a complete departure from any American action whatsoever. However, there are some big names in some historic matches, so I was confident I’d discover a gem or two.

Something of a rematch from previous articles took place in UWA as Los Cowboys and Gran Hamada met Negro Casas and Dr Wagner Jr., with Rambo replacing Mike Lozansky as their partner. This switch was immediately vindicated as Rambo used his partners’ arrival to attack the opponents as the primera caida started abruptly. This set the pace for what followed as quick exchanges gave way to ringside brawling. Though things settled down, the rudos seemed to ride the wave of this attack into taking the caida after Wagner Jr. pinned Hamada with a double underhook sitout powerbomb, with Rambo following up on one of Los Cowboys with a proto-version of the Bronco Buster.

The rudos struggled to get anything going in the segunda caida, especially Rambo who earned a left hand from Texano after offering a handshake. Wagner Jr. ended up getting sandwiched between Cowboys spinkicks for one of the pinfalls. A neat spot had Casas rana Rambo by mistake, with the tecnico team turning the move into a two subsequent pins to eliminate the team as a whole – a move I’ve never seen before and a great one for embarrassing the rudos.

Rambo is all about the unique spots as teeter-tottering on the top rope has the rudos close to falling out in the tercera as he grabbed a handful of Casas’ hair to keep himself from dropping. Things only continued to get worse for the trio as the tecnicos were dominant, in particular with Los Cowboys isolating Casas for an extended period of time. The finish was confusing as Casas and Hamada ended up getting pinned whilst Hamada applied a surfboard, which seemingly left the match as a draw due to what I can only assume was the captain’s fall rules? Either way, the tecnico-heavy final two falls hurt the tension on an otherwise fine contest.

As I’ve made clear before, UWFi or shoot style isn’t really my bag at all, but I can appreciate a good ruck when I see one. Hiromitsu Kanehara and Masakazu Maeda are the two men in the ring for this fight and Maeda for one is definitely up for a scrap as his knees and slaps rocked Kanehara multiple times. Kanehara wasn’t unwilling to trade, but his biggest successes in the early going came on the mat as he looked to nullify Maeda’s strikes. A neat suplex throw allowed Kanehara to ground Maeda and soon after earned his first count with a brutal kick to the face on his downed opponent. Maeda’s exertions seemed to be getting the better of him as his strikes lacked the impact from earlier, highlighted by Kanehara withstanding numerous blows that earlier had managed to drop him.

Any suggestions Maeda was out of it were soon extinguished as a leg grapple on the canvas saw him stamp on Kanehara’s head for another count. With both men rapidly losing points (each started with 15 as per the UWFi rules), a German suplex and an armbar that forced a rope break left Maeda on one point only to Kanehara’s three. Rather than defend, Maeda went on the attack but was unable to halt Kanehara, who earned the submission win with a half Boston crab after a beautiful fireman’s carry-style slam. A really fun contest, even for someone who isn’t necessarily a fan of the style. Kanehara hung in there and weathered the storms to pick up the win.

In Joe Pedicino’s GWF Newsroom, half of the segment is given over to talking about Terry Garvin’s woes with Bruce Pritchard and his group of wrongdoers (Big Bad John, Dark Patriot and Barry Horowitz). However, more interestingly is the announcement of two deaths: Buzz Sawyer and Tojo Yamamoto. Both were sad in their own right – Sawyer, a drug overdose; Yamamoto, a self-inflicted gunshot wound. Ever keeping kayfabe, Pedicino does remind people that even though Yamamoto was evil, he still had a family and friends who loved him.

An early favorite of mine when I was a child was Shinya Hashimoto and it is Hash who is in the ring next as he took on a man I would learn to love as I got older – Masahiro Chono. A handshake set the tone as two of the Three Musketeers tentatively engaged in a feeling-out process. When things gave way to more violent altercations, it wasn’t surprising that at least initially, Hashimoto reigned supreme. An errant Chono strike busted Hashimoto’s nose, which only served to add an additional snap to Hashimoto’s offense.

The first fall attempt of note came off the back of Hashimoto just dumping Chono with a modified suplex into a slam, a signal that Hashimoto was beginning to unload his heavier artillery on his opponent, further indicated by a belly to belly and belly to back in quick succession. It took a desperation Samoan drop to turn things in Chono’s favor, whilst a further Hashimoto onslaught is cut short by an STF out of nowhere. Hash managed to get the ropes, before catching Chono with a top rope belly to belly superplex and a jumping DDT for the win. Never really got above decent in terms of action for me, especially as Hashimoto swallowed Chono up for the most part.

From the same card, the hoss duo of Big Van Vader and Bam Bam Bigelow challenged Hiroshi Hase and Keiji Muto for the IWGP Tag Team Titles, a match that the compilation joined in progress as Muto impressively dropped Vader with a belly to back suplex. Vader was able to kickout of a Muto moonsault; Muto returned the favor by beating the three following two successive gaijin splashes. However, it had turned into a case of how long the champions could survive, and for Muto, it wasn’t long. The meat in a Vader/Bigelow sandwich, Muto was then dumped with a Vader chokeslam for the title change. A fun finish as the devastating power of Bigelow and Vader was on show for all to see.

From UWA earlier to CMLL now, the trio of El Rayo De Jalisco Jr, Konnan and Perro Aguayo took on Cien Caras, Mascara Ano 2000 and Sangre Chicana. The sense of scale was immediately bigger as all six men get grand entrances, though Chicana wasn’t yet in the ring when his team got jumped. As the wild brawling occurred around the ring, Chicana almost dragged a member of the audience into the middle of the action as the luchadors looked to take the contest to every fan or so it seemed in an opening ten minutes that barely entered the ring. When the match finally threatened to resemble something more like a conventional contest, Caras and Masacara brutally double teamed Konnan, constantly deciding to eschew the pinfall to inflict more damage. Finally, a treble big boot is deemed enough for Caras to pin Konnan with the tip of his finger in an ultimate show of disrespect.

It was Aguayo who led the charge for his team in the segunda caida as what had been a pretty comprehensive defeat gave way to a more even encounter, with Jalisco and Caras getting eliminated by Mascara and Konnan respectively in quick order. However, it is risk-taking from Aguayo that cost his team as a missed rolling senton and a right hand from Chicana earns Caras, Mascara and Chicana the victory in two straight falls. This was a wild contest that garnered molten heat from the audience – well worth checking out.

The final two matches come from the same All-Japan show. Firstly, newly minted Triple Crown champion Stan Hansen defended the gold against Mitsuharu Misawa. The sense of urgency was clear as the two men began brawling before the streamers had even left the ring. Misawa’s tactic of slowing down Hansen worked initially, and he even managed to withstand the first Hansen onslaught to return to the mat with a side headlock. Hansen’s smothering offense of strikes and chokes eventually begun to overwhelm the challenger.

Misawa wasn’t out of things yet though and inspired by kicking out of a powerbomb and a back suplex, he fired back with a DDT onto the concrete in revenge for one the champion had dished out earlier. The crowd is all in on Misawa winning and the reactions are off the scale as he twice locked in a crossface. Unable to take those opportunities, Misawa eventually fell prey to the Lariat, though not before teasing two more wins with a back suplex reverasal a la the Tsuruta victory and a spinning elbow. The lariat that does end the contest absolutely drilled the challenger; a previous attempt only having clipped him. The second half was strong, building well off a deliberately paced opening.

The final match saw The Miracle Violence Connection against Jumbo Tsuruta and Akira Taue, a match for the gaijin’s All Japan World Tag Team Titles. This is joined in progress as Tsuruta was the only thing that stopped Taue from getting pinned following a Gordy powerbomb. Taue’s beatdown built to a hot tag to Tsuruta, but the effectiveness of the champion’s double-teaming soon has the legend in a similar position to his charge.

The physicality of the champions was often too much for the challengers, as they struggled to string a sequence of moves together for long enough to put the Connection on the back foot. This was highlighted by Tsuruta going for flash pinfalls in a desperate attempt to take the gold whilst fighting from underneath. Tsuruta did manage to finally hit a backdrop driver on Williams, but it wasn’t until he landed a second one that the Connection’s title reign was over, even though it did look like Williams rolled his shoulder before the three. Solid action, though I personally was surprised to see Tsuruta and Taue go over, even if I can’t quite put my finger on why.

This was a sneaky good selection of matches that I initially felt weren’t too special, but with hindsight and reflection, actually offered up some great action and good variety. The CMLL trio and the UWFi fight probably get my nod for best matches of the week as they both engaged me far more than I had expected. An American-centric week is to follow as action from Memphis, WWF and SMW dominate as I continue on That Was The Year That Was.

Catch you next time.