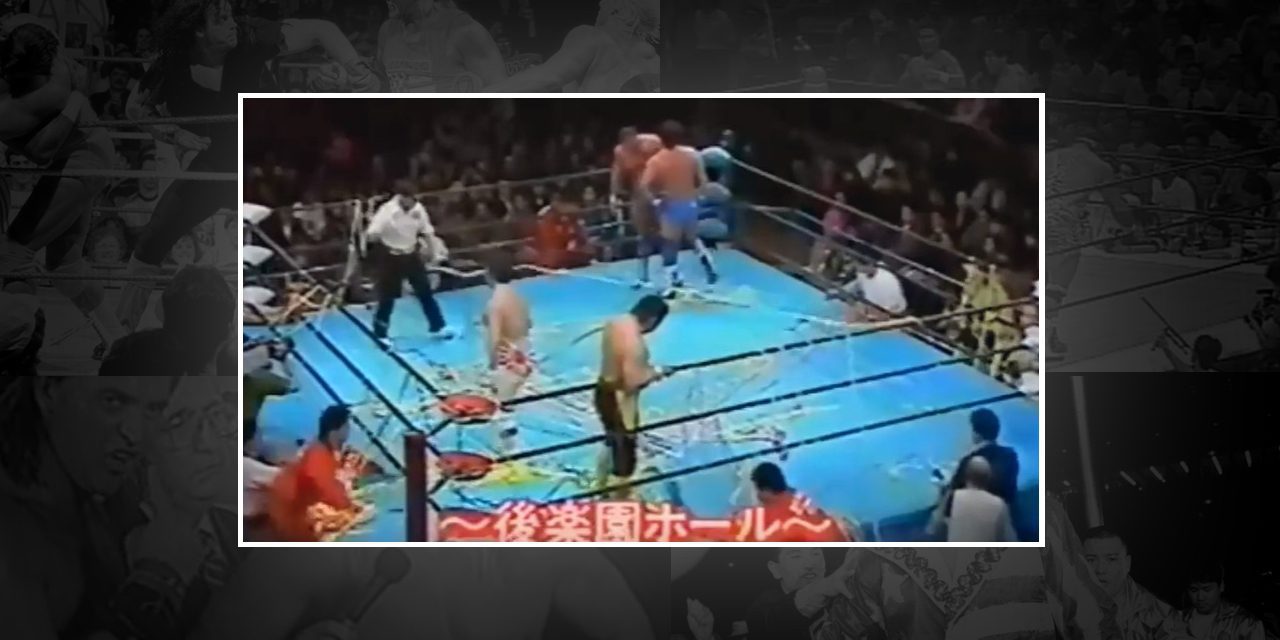 This article covers footage from February 22-27.

After a couple of weeks that have been all about the sizzle rather than the steak, my hope is that I’m in for a better time of things as we begin in All Japan, before taking in some Memphis, WCW, shoot style and fancammed WWF.

There are few teams that are more exciting to watch, for my money, than the Can-Am Express as Dan Kroffat and Doug Furnas confirmed in a hard-hitting encounter with Toshiaki Kawada and Tsuyoshi Kikuchi. As gaijin heels, jumping Kawada and Kikuchi before the bell, press slamming Kikuchi over the top rope (Furnas) and taking Kawada out with a tiger driver at ringside (Kroffat) as a pretty effective way to begin, leading also to a great close fall as Kawada collapsed on a resulting Irish whip. For long periods of the match, the Express just bullied their opponents with Kikuchi, in particular, getting rough treatment in Lion Tamer and a Cobra clutch, before he ended up getting launched across the ring by Kroffat with a running powerbomb. The success on offense of the Express helped build to the comeback with Kawada and Kikuchi unloading their strongest offense as they tried to capitalize on relatively brief openings. Still, Kawada is a man who can hit hard and fast, ending Kroffat’s night and the match with a powerbomb followed by the stretch plum for the submission. Excellent and has me looking forward to potentially more Express on the set.

It wouldn’t be a week without a combination of the Moondogs, Jeff Jarrett and Jerry Lawler brawling in Memphis, with the ‘Dogs this time interrupting a Jarrett match against the Shadow. Lawler isn’t around to save Jarrett, though a baseball slide saw Jarrett escape the attack before launching trash can lids and various other weapons into the ring. This is all to build to a Lawler pre-tape that announced the Junkyard Dog was going to team with Lawler and Jarrett against the Moondogs and Big Black Dog. In announcing JYD, Lawler used about every cliché statement about dogs that he could find, alongside the claim that Dog’s bite was definitely worse than his bark. I can’t imagine that JYD in 1992 is going to yield anything worth watching, but you never know.

The end of a Smoky Mountain Wrestling show was up next as Jimmy Golden seemingly had interfered on behalf of the Koloffs (Ivan and Vladimir) to help them defeat the Fultons. As the credits roll, we get a building-wide brawl as Tim Horner joined the Fultons in an attempt to get some measure of revenge. Whilst the fighting itself is pretty cool, Bobby Fulton’s mullet is one of many things that makes this promotion feel a little dated even for the time.

The Dangerous Alliance versus WCW feud allowed the promotion to stack their cards with some real star-studded matches, no better highlighted than an eight-man tag that saw the Alliance against Sting, Ricky Steamboat, Dustin Rhodes and Barry Windham. The star power meant that a lot could be milked out of stand-offs and flurries of offense without burning through too much prior to Superbrawl which was a week later. People most want to see Sting and Ric Rude face off and they get their wish halfway through – Sting was ridiculously over with the ‘92 WCW fans, with them going crazy in particular for the Stinger throwing punches in the heel corner.

The short heel heat segment began with Rhodes getting hot shot throat first on the top rope, and saw the knee targeted with by each member in a show of strong teamwork. A hot tag to Steamboat unsurprisingly led to all eight men in the ring, before a top rope crossbody put away Zbyszko for the popular victory. Steamboat’s joy was a short-lived as Rude dropped him with a Rude Awakening in a perfect way to build to their match at Superbrawl.

Another match from PWFG followed and it is the big boss, Yoshiaki Fujiwara, taking on Yusuke Fuke, one of the wrestlers who helped form PWFG in the first place. As mentioned before, this is not necessarily what I like in my wrestling, but the first Fujiwara kick putting Fuke down for a nine-count set the tone nicely. This gets a lot of love elsewhere on the internet and I can see why this would be appreciated for fans of the style, with some good striking and neat counters, especially when a blocked Fuke Boston Crab ends up with him working it into a cross armbreaker instead. Fujiwara’s strikes to the leg seemed to be the key difference between the two men and that proved to be the case as the referee eventually waved the match off after Fujiwara blasted Fuke once more in the shin. A decent encounter even for someone who isn’t the biggest shoot style fan.

An interesting match on paper is up next as cam footage of a match from Worcester that had Ric Flair and Roddy Piper going one on one inside of a steel cage. The quality isn’t great, but it really does capture how over Piper is and how much heat Flair is able to generate. Flair’s heelwork is naturally great as he hits one punch on Piper and then tries to escape immediately. Unsurprisingly, he was cut off, with Piper also showing he can dig deep in the playbook with an eye poke of his own moments later. Most of the usual tropes of cage matches appear as the two men brawl whilst sitting atop the bars, Flair is only stopped from escaping via a handful of hair and the match is restarted after both wrestlers land on the floor at the same time. Interference from Rick Martel, slamming the cage door into Piper’s face, appeared to give Flair the advantage, but a kickout at two and Flair’s own slam of Piper into the cage on the outside saw the Rowdy One fall to the floor in what had turned into a race to get down first. Nothing hugely noteworthy though the crowd was molten for everything.

The final match of this week is joined in progress as Kenta Kobashi battled Jumbo Tsuruta in All Japan. Kobashi was in control as the clip began, but Tsuruta soon dumped him knee first across a table in an attempt to slow his opponent down. This could have been critical, yet a spirited Kobashi continued to attack, including planting Tsuruta with a DDT at ringside and with the mats pulled back. The decision to go back to a sleeper hold for a second time proved costly for Kobashi when Tsuruta dumped him with a backdrop driver, though was too tired to cover quickly enough to end the match.

Later on in a wild spot, Tsuruta went high risk with a top rope crossbody for two; moments later, it was Kobashi flying through the air with a moonsault that also wasn’t enough. The crowd is all in on Kobashi winning and he comes close with a German suplex and a powerslam, but it is not to be as Tsuruta nailed the backdrop driver and hooked both legs for the win. Kobashi’s desire was admirable and Tsuruta had to reach down to survive a real onslaught.

Superbrawl forms the bulks of next week’s action as we draw things to a close on a collection of matches and segments that were a notch above the ones in recent weeks. Nothing quite topped the Can-Am Express versus Kawada and Kikuchi, but the Kobashi/Tsuruta contest and the eight-man tag from WCW were ample support. Join me next week as I continue to look at 1992 as That Was The Year That Was.