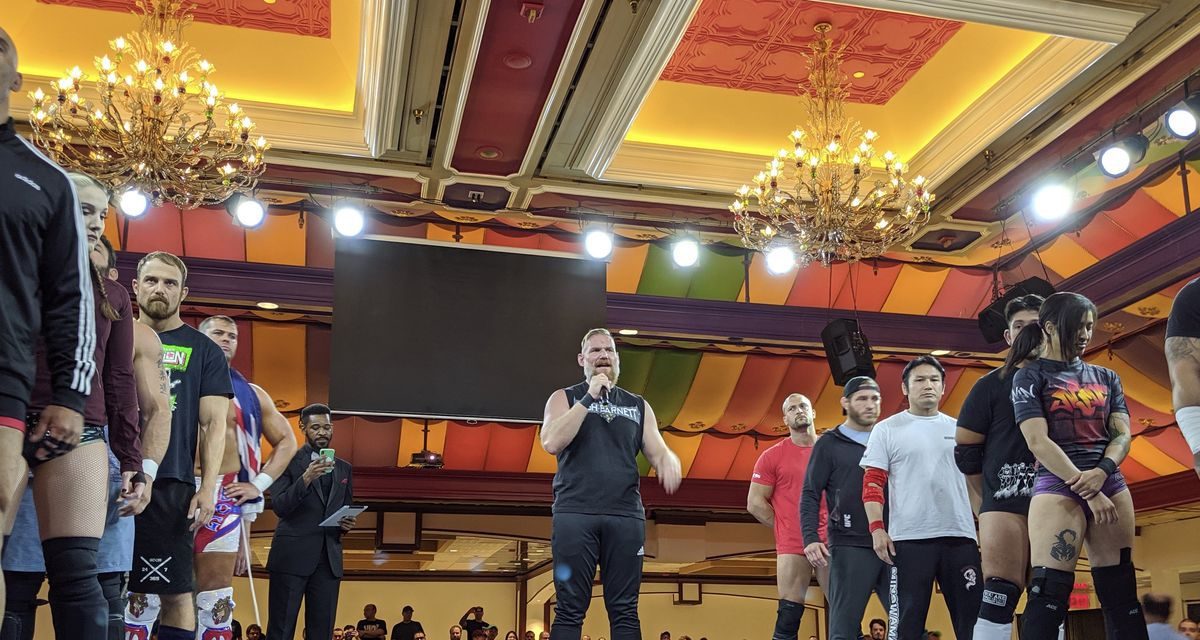 It’s no secret that I’m a huge fan of the Bloodsport events. It just scratches so many itches for me. Pro wrestling, shoot fighting, 80s movies. I really don’t know what more people want.

This, the third Bloodsport event (numbered the second for reasons unbeknownst to me), mostly kept pace with previous two and was an easy watch that I’d definitely recommend.

Before the matches started, it opened with a parade of combatants, which was a nice touch. It’s something you see often in Japanese MMA. If you were wondering what that was all about, now you know.

The commentary on the show was a DRAMATIC improvement over the first two. The last one, in particular, had me practically yelling at my TV because it was so out of place and ill-fitting. Emil Jay did play-by-play for the entire show and did a pretty good job. He doesn’t have extensive knowledge of the holds, but no less so than some UFC play-by-play guys like Brendan Fitzgerald. When combined with Filthy Tom Lawlor on commentary, the commentary was legitimately very good. Jay’s play-by-play combined with Lawlor’s color hit right in that lane where the commentary for these shows should have been all along.

This was the perfect opener. They kept a quick pace, the mixed grappling and striking in equal measure to give you an idea what you were in for the rest of the night, and they worked well together. The finish at the end was a little bit mistimed and telegraphed, but all in all, it was a fine match.

The story here was that Erik Hammer is a legitimate competitive catch wrestler and JR Kratos is a big beefy pro wrestler. Hammer’s superior grappling battled against Kratos’s superior strength and explosiveness and it made for a really fun match. For a while.

There’s a point in the match where Jay on commentary says, “Looks like we’re back to square one,” which is exactly how it felt watching. The match had already peaked and now we were seeing it again. That really hurt it for me, but up until then, this was great.

First of all, the tale of the tape thing was a nice touch all night, but this was the first time it really caught my attention. You expect me to believe that Allysin Kay weighs 150 pounds and Nicole Savoy weighs 145? Yep, nothing to see here, just a mere 5-pound weight differential between these two.

If you read the preview for this show on the site here, I apologize. I anticipated this being way more of a slams and striking match. Instead, we got a match contested almost entirely on the mat. That ended up being fortunate, because once they did start striking on the feet it was ridiculous looking.

The real MVP of this match was Filthy Tom. He made the match sound way better than it was and almost had me believing it. He also read my mind and shouted out Ryan Hall as Kay dove for imanari roll after imanari roll.

Ultimately, Filthy Tom was not successful in convincing me this was good and the crowd, who could not hear him anyway, was not convinced either. This really brought down a hot crowd. They could have maybe shortened this and tightened it up, but really they just might not be cut out for this style.

Grimm was really the only true heel on the show; people hated that guy. In another tale of the tape wackiness, Grimm was listed as being heavier than Carelli. Surely they must realize we have eyes, right?

The big impression this match made on me was Anthony Carelli, the former Santino Marella. If you had told me a decade ago that Santino Marella could be a legit tough-guy character and that it’d be believable, I would have laughed in your face. What is crazy is that the “genius promoter” Vince McMahon never found that in this guy.

If I could give a word of advice to anyone going to WWE: Do not let Vince McMahon know that you have any ability whatsoever to do comedy.

The match itself was pretty good, it had its moments, but it also dragged a bit. The big take away was Carelli’s presence and menace and, man, I didn’t think he had that in him.

This match bored me, it bored the crowd, it honestly may have bored Minowa at times. It started great with Minowa throwing his famous dropkick. Then they just rolled for a while. It didn’t build to anything, it was just jiu-jitsu practice. The crowd was dead until Minowa hit a rolling koppo kick and then shortly after it finished. It was a match.

Filthy Tom is a star in the making. AEW and NJPW should be racing each other to try to sign this guy. The energy he brings, the way he connects with the crowd, he felt like the biggest guy on the show besides Nick Gage.

It helped that this match was after intermission, but it hooked the crowd in with a much clearer story than, say, the Thatcher match. They were going blow for blow, matching each other along the way. It was wrestled in the shoot style, but it was constructed much like a pro wrestling match.

It peaked perfectly and both men were excellent in it. Leave it to a UFC fighter to come in and show these pro wrestling guys how to keep the pro wrestling in these Bloodsport matches. Not quite a Match of the Year Contender, but this was one for the notebooks.

Even though this was a shoot-style show and you’d expect the crowd to be geared for that type of wrestling and performer, Nick Gage was the most over dude on this show by MILES. What I’ve noticed is that Gage has an uncanny ability to connect with the fans at ringside. He connects so instantly and honestly, it feels like he knows all of them personally. I’ve never seen anything like it. Nick Gage doesn’t have matches, he has family reunions.

Killer Kross was a great foil here. The way he countered Gage’s opening flying knee by taking him down and holding him in the mount to troll him and the audience was perfect. The match, on the whole, did exactly what it needed to do. It was a ton of fun while it lasted, had some sick strikes (THAT HEADBUTT THO) and a great little nod to Frank Shamrock and Bas Rutten.

The ending was incredible as well, with Gage going out as only Nick Gage can, middle fingers in the air, no regard for his well-being. Him waking up not knowing or understanding why he lost was as Nick Gage as it gets.

Then, as if the match couldn’t be more wild, afterward Killer Kross calls out Dave Batista to fight him in Bloodsport. It’s incredibly random, but, hey, I absolutely would watch that.

WAR IS AGELESS. This was not the match to have following the craziness that was Killer Kross and Nick Gage. They had a very technical grappling match that was good, don’t get me wrong, but felt a little samey after a while. They’d rotate between the same positions, throw the same strikes and attempt the same holds.

It took ten minutes for me to start to get restless, but by that I point, I just wanted them to switch it up a bit. Four minutes later, it felt like it had officially gone too long. Not long after that, though, Barnett tears his tape off, hulks up, and a striking exchange ensues that picked up the match and the crowd and lead to an exciting finish. These are the hardest matches for me to rate. I liked the start, then got bored, then liked the finish. 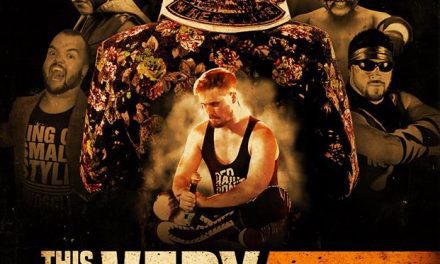