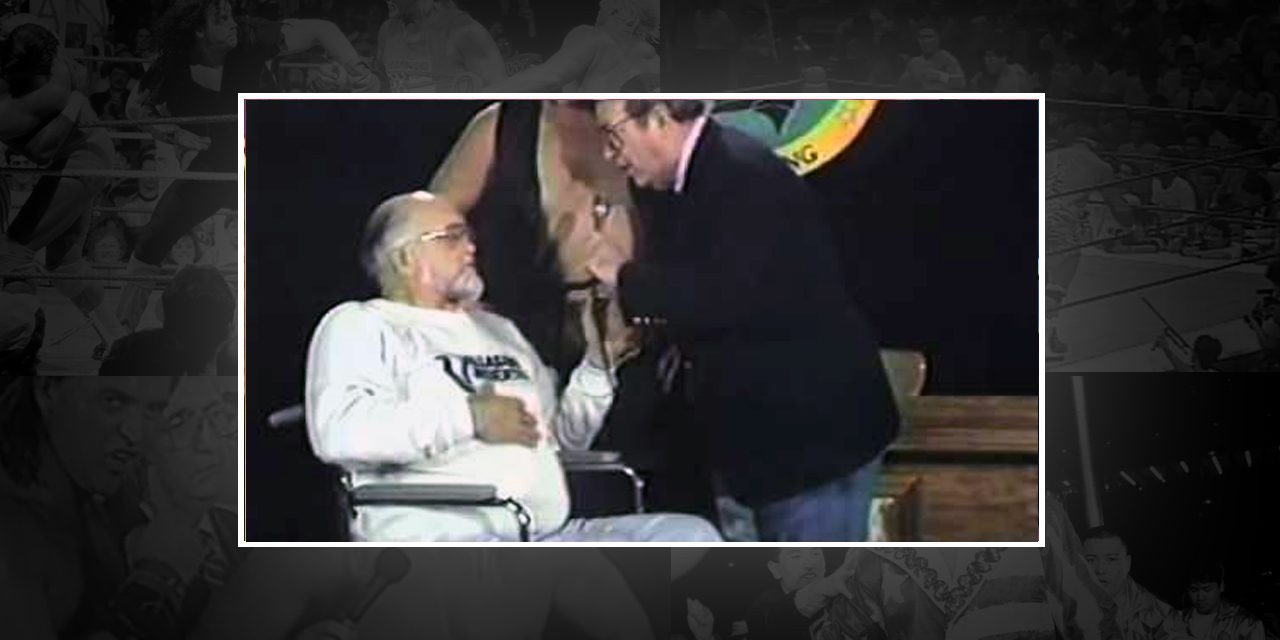 In 1992, wrestling was still at enough of a high – or at least some of its wrestlers were – to garner some traction in mainstream advertising. Thus, Hulk Hogan talking about Right Guard whilst painting on a beach. This thirty seconds is a glorious slice of early 90s advertising with Hogan reminding people that ‘one should be careful not to let one’s personal aroma do the talking’. Any commercial with mention of ‘odoriferous emanations’ is pushing things just that bit too far.

Speaking of Hogan, the official change in Wrestlemania IX is revealed in a WWF Update with Mean Gene. What works here at least is that Hogan isn’t happy with the change as it does move him away from the WWF Heavyweight Title match, which makes sense even if he is getting a shot at revenge with his match against Sid. Another man who is unhappy is Ric Flair, with Mr Perfect suggesting that Tunney has it out for the champion. Flair’s words hinted at a secret that the champion had over Randy Savage, though the Macho Man largely shrugged that off, believing that if Flair didn’t have ‘it’, he was going to take the title.

Sid and Hogan’s back and forth began with Justice talking about how the envy was clear from Summerslam, before telling the Hulkster to ask his friend Brutus Beefcake how it felt to be a fox trapped with nowhere to go. Hogan’s is Hulkamania 101, with his fans helping him turn a negative into a positive. The more I see of Sid at this time, the more it makes me wonder what they could have done with him if he had managed to keep on the straight and narrow; he exudes star appeal.

It wouldn’t be an article without some more Moondogs brawling their way through Memphis, though the focus in recent weeks has been on studio beatdowns of jobbers. This week, it is Brian Collins and Ricky Hutching who get a Moondog whooping, though a pre-match focus on how awful it was that one of the Moondogs had been cut during a match against Jerry Lawler and Jeff Jarrett seemed very much at odds with their roughhousing demeanor. The can of worms had been opened, according to Richard Lee, by this and all the abuse they had given him since the turn of the year, and Collins and Hutching get a chair-and-bone-assisted beatdown that left them both bleeding. Eddie Marlin even had to come down to stop the assault as a Doomsday Decapitation may have been enough to end the match, but not the attack. Poor Collins and Hutching.

Three promos from Smoky Mountain followed as Jim Cornette, Ron Wright and Buddy Landel all get a chance to talk people into the building. Cornette’s heel work in SMW at this point is great as he utilized Magic Johnson and PeeWee Herman’s respective HIV diagnosis and public indecency scandal to talk about how you can’t trust anyone these days. The crowd may have been an example of a ‘genetic experiment gone wrong’, but they could trust Cornette that his team was going to win the tag team titles in the upcoming tournament.

Ron Wright was a very different heel at this time, but equally as effective. His was a gimmick I only learned about in the last few years and one that is so simple, yet so effective. Sitting in a wheelchair and talking to Dutch Mantell, Wright bemoaned his lot whilst also talking about managing a wrestler or two to help fund his need for surgery. Everything is delivered with deathly sincerity, making his eventual interference in his clients’ matches all the more galling for the fans.

Landel’s is the lesser of the three but not by much, especially as Buddy shot from the hip. He declared that he wasn’t a kiss ass or hear to do promotors favours, alongside suggesting that many others in the business were in danger of breaking their noses when a promotor stopped walking. Landel was still able to go at this time and a potentially solid addition to the Smoky Mountain roster.

The ‘simple-minded swamp pigs’ that made up the WCW audience got a chance to see Rick Rude in action against Brian Pillman in the next match on the set. This was a simplistic heel/face contest that aimed to present the face as not only an underdog, but a viable winner. Pillman turned down a handshake at the start and surprised Rude multiple times by going for the leg, including one around the ringpost. Rude’s offense is always methodical as he turned the tide with a backbreaker and a bear hug, as well as turning a crucifix attempt into a nifty Samoan drop. A weird-looking move to nothing from the top by Rude allowed Pillman to hit a dropkick, before Paul E Dangerously’s distractions are seemingly all that kept Rude in the match after a top rope crossbody by Pillman had the referee out of position. Another crossbody led to a Rude stungun and the Rude Awakening for the win in a match that picked up well towards the end.

Back to UWA and another chance to see Los Cowboys (El Texano and Silver King) in action as they teamed with Gran Hamada to take on Negro Casas, Dr Wagner Jr. and Mike Lozansky/Tigre Canadiense, owner of the worst mullet I’ve seen so far this year. The match is clipped with the caidas often joined in progress, making it hard to get a full sense of what happened in the contest. The primera is most notable for some excellent exchanges between Casas and Hamada, with Casas also working some speedy transitions with Texano which ended with a backbreaker for the rudo. A Hamada rana on Wagner sparks the finish as Cowboy corner clotheslines on Casas and a double gutbuster by the duo on Lozansky were enough to take a one-nil lead.

What was shown of the segunda had Los Cowboys seemingly taking control with King in particular nailing Casas with a brutal clothesline, but a Wagner butterfly bomb on Texano and a pin on Hamada following a Lozansky Vader bomb on Hamada anticlimactically finished the caida (King went unpinned), though also allowed the rudos to have a mid-ring strut to celebrate. To close out the match with the tercera, some heat was built by Hamada being kept in the corner, before a wild spot had Casas dropkicked off of the top and to the floor. This signalled the beginning of the spiralling down to defeat for the rudos as a clothesine on Casas by Hamada and a powerbomb on Lozansky by Texano is enough to close out the contest. Los Cowboys again impress, whilst Casas is different class than many I’ve seen this year.

GWF is where things end up to finish as Eddie Gilbert is apparently in a feud with Bruce Prichard which involved Prichard finding men to attempt to defeat Gilbert. This week, it is Big Bad John’s turn, a fairly generic-looking big guy who would eventually end up as an actor in Hollywood of all things. This match is all about whether Prichard or Gilbert will end up having to kiss the other’s feet at the end and it leans heavily into the ‘immovable object’ monster trope from the opening bell. Nothing phased John, not even chairshots. Gilbert got brief success after a missed charge allowed him to target the leg, but Prichard’s distraction ended up with Gilbert in an over the shoulder backbreaker moments later.

What followed was a little on the odd side as the ref called the match without Gilbert seemingly giving up. Terry Garvin and the senior referee both came down to either challenge or discuss the result, though Gilbert was quick to send Garvin away as if he had some plan for what was going to happen next. He didn’t. He kissed the feet, went to attack Prichard only when provoked, and was slapped into the backbreaker one more time. Garvin did try and save his friend with chairshots that were now – considering they were shown before – considered too violent to broadcast, but John didn’t even break the hold. It is all engaging enough, but the bit with Garvin and the two referees couldn’t have felt less dramatic if they tried.

A shtick and segment heavy period for this week’s article, with the highlight probably going to the lucha trios match even if it was clipped in places. Join me next week as I continue to explore That Was The Year That Was 1992.