These two had a tremendous match earlier this year in the Champion Carnival. This was also pretty good but didn’t quite hit the level of the Champion Carnival match. The story of was pretty simple. These guys did a bunch of headlocks and tests of strengths early on. And from there lots of stiff chops back and forth. Zeus also pulled out some flying moves like a dive over the ropes to the floor and a Frog Splash off the top rope. My main issues with this match was that James’ working over Zeus’ right arm (the one he does his chops with) was abandoned not long after it was introduced into the match, and Zeus quickly stopped selling it. I thought the ending was a bit abrupt as well. Zeus got a Lariat and then quickly followed up with the Jackhammer for the win in just under 15 minutes. This could have been really great with just a couple of more minutes and some more near falls. But still, if you like hoss fights, you need to check this out. ****

In the reverse scenario of the previous match, these two had a god awful 30 minute draw in the Champion Carnival this year (I called it the worst match of the tournament), but somewhat redeemed themselves here. The main issue with this match was the main issue with their Champion Carnival match – it went to long. While this match went a little over 22 minutes instead of 30 minutes, it was still too long. There was some initial feeling out work and pointless brawling in the crowd that went nowhere. Once they killed some time, this did turn into something decent with a bunch of big moves and some near falls. There was what looked to have been a possible botch when Ishikawa looked like he was going to do a Fire Thunder Driver to Sai on the apron but just sort of dropped him. Ending sequence was also pretty good with Ishikawa pulling out the Giant Slam to get the win. Shave a few minutes off of this and it could have been great. ***1/4

A better show than last night. But the tournament matches that we have had so far have been victims of poor layouts or either too much or too little time. Hopefully this is rectified as the tournament moves forward.

I’m not exactly sure what the point of James doing yet another job is. He has become a great worker but has dropped a lot of falls these past few months. I had even said that he should win this tournament as him vs. Miyahara for the Triple Crown would be fresh by AJPW’s current standards. AJPW better not miss the opportunity they have with him. They need new stars badly. 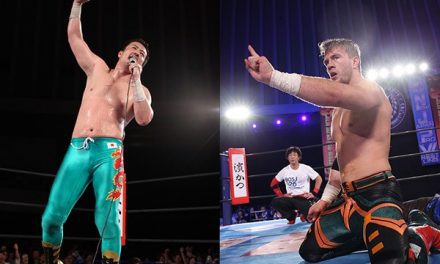 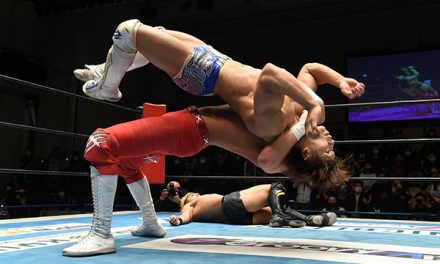 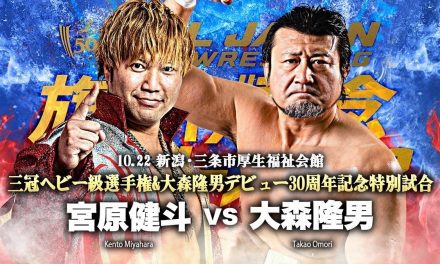