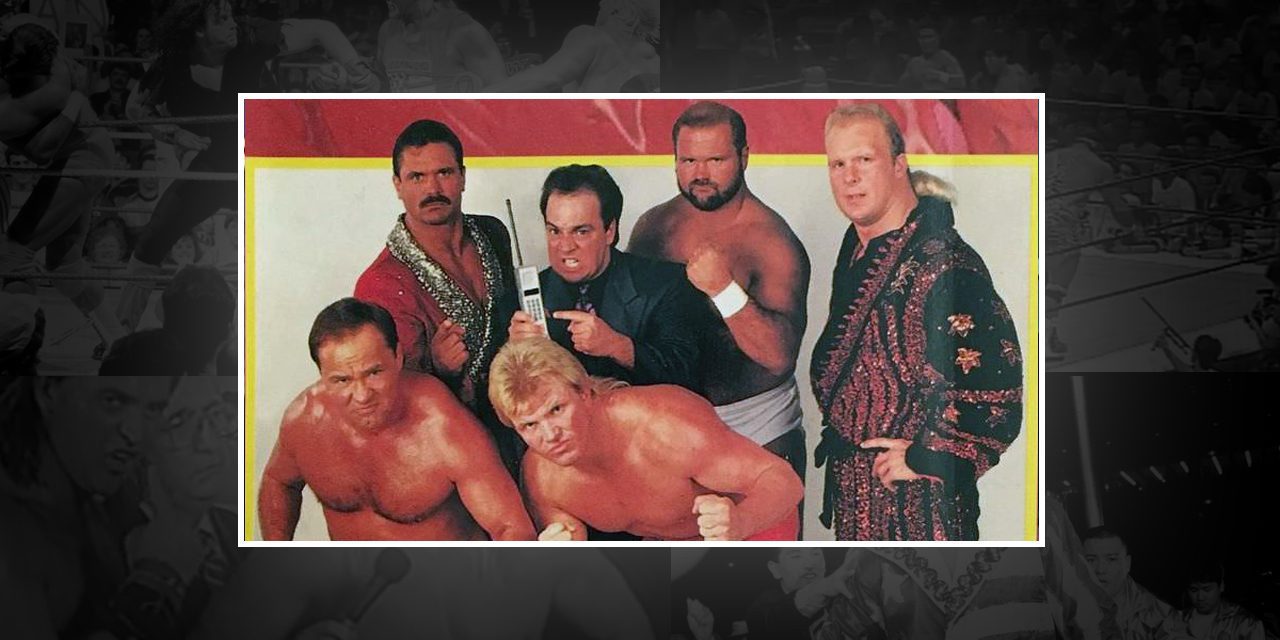 The article this week starts on an episode of WCW Main Event as the push towards Superbrawl at the end of February began in earnest. Things begin in particular with a great promo with Paul E. Dangerously, Arn Anderson and Bobby Eaton talking to Jim Ross…except Eaton understandably stayed silent. Their opponents at the PPV are going to be the Steiners and whilst Dangerously talked up the quality of their opponents, it is Anderson who stole the show with a rant that covered the recession, peoples’ desire for a hand out and taking risks as he claimed that Dangerously and the Dangerous Alliance only gambled with what they could control, which is themselves. For a stock promotional segment, Anderson delivered in spades.

Not content with defeating them at Clash of the Champions, The Steiners took on Vader and Mr. Hughes once more, though this time with Sting and Cactus Jack their respective additional partners. I fear already for Jack in this sea of humanity, though Scott at least gave it a minute of grappling before he dumped Cactus with a textbook belly to belly suplex. Rick is even wilder than usual, hitting a better looking overhead belly to belly on Vader than at the Clash, before launching himself through the ropes in an effort to not let the mastodon get away. The involvement of Sting tied into Harley Race’s alliance with Lex Luger, and we get great snippets of his future feud with Vader as the big man hit a modified press slam but Sting fought back with a slam of his own. A six-man brawl saw Vader in particular throwing bombs, but it was Sting who picked up the win with a top rope attack on Mr. Hughes. A slight notch below the Clash tag, though still a fun TV match.

Fresh from regaining the IWGP Junior Heavyweight Title, Jushin Liger had a tough opponent two days later as he stepped into the ring with Wild Pegasus (Chris Benoit). With little likelihood of a title change so soon after Liger’s victory, what Pegasus did boast was a win for the gold over Liger in 1990, so was at least a legitimate contender. Pegasus played the overbearing bully, throwing Liger around with suplexes and taking a pretty hard bump himself on a dropkick from the top to the ringside floor, though this methodical brutality saw Liger escalate his attacks to match with a surfboard into a dragon sleeper variation a particular highlight.

Heading down the stretch, Liger reached deep in his playbook with a moonsault press to the outside, before nearly losing after Pegasus turned a top rope back superplex into a pin. Pegasus even found time to channel his inner Bobby Eaton with an Alabama Jam, as well as connect with his top rope headbutt. The finish was excellent for the narrative told as Liger had been just able to survive Pegasus’ most potent offense, before capitalising on a reversal of a suplex to wrap his opponent up in a bridging pin for the victory. Pegasus’ offense was always viable enough to put Liger away, so the heat built well even though the fans probably realised Liger was always likely to come out on top. Not content with the result, Pegasus attacked Liger after the bell, with the champion selling the exertion that had been required to finish the match on top.

Another title match from the same card saw Keiji Muto and Hiroshi Hase defending the IWGP Tag Team Championships against the interesting duo of Scott Norton and Brad Armstrong. This is paced exactly the way an over twenty minute long title match goes with lots of feeling out, though it is occasionally punctuated with Norton bowling Hase and Muto over with ease. The tone is set somewhat by Norton as multiple presses on a slam to Hase is followed immediately by another side headlock. The champions’ period of success unsurprisingly comes against Armstrong as they work the leg, including Hase wrapping it around the ringpost and dropping it on the guardrail. What was interesting is that the fans didn’t take kindly to the tactics of Muto and Hase in particular as Armstrong played an effective face in peril in the situation. Kickouts of Hase’s uranage and a modified side suplex garnered cheers, though the crowd did still count along with Hase’s giant swing.

In a neat spot, it is Hase’s dizziness after that move that left him vulnerable to a Norton lariat, which also led to Armstrong making the hot tag. Norton’s power moves are occasionally sloppy, especially a double suplex on the champions, but it is effective enough to keep the momentum building to the finish. Simply put, when Norton is ‘dealt with’, the champions manage to retain – Norton is backdropped over the top rope and taken out by a diving Hase; Muto utilised a backbreaker on Armstrong and hit the moonsault for the popular victory, even considering the heat they’d received earlier in the match. Overlong for what it was, but the fans clearly enjoyed the second half.

As admitted before, my lucha knowledge is not always the strongest and I’ve never seen either Huracan Sevilla or Bestia Salvaje before that I am aware of. However, the two men met in a CMLL ring in a caballera versus caballera contest. The tone was set early as Salvaje sent Sevilla hard into the ringpost during the opening exchange, whilst Sevilla took Salvaje out moments later with a suicide dive. The referee is criminally slow on his counts, but that doesn’t stop Sevilla taking the primera caida with a huracanrana. The referee continued to get involved as he got himself between Sevilla and Salvaje in a short segunda caida that ended with Sevilla submitting to a bow and arrow variation.

Salvaje attacked Sevilla at ringside as the decisive tercera caida began, though Sevilla and Norman Smiley (his second) are unhappy about the last fall, playing up the rudo referee angle. It is Sevilla that picked up the pace by taking Salvaje to ringside to hit him into the ringpost as well as launching himself with a picture perfect suicide dive as spots from earlier were repeated. This was played up well as Salvaje reversed a huracanrana into a powerbomb, yet the slowness of the official killed the tension of the slow count. After some missed top rope manoeuvres, Salvaje absolutely crushed a top rope senton but it was only good for a two. All sense of structure flew out of the window as the two men continued to trade dives, going ‘your move, my move’ almost. It is exciting, admittedly, but not the most compelling work I’ve seen. By the end, Salvaje is busted open but has enough wherewithal to roll Sevilla into a head and arm submission for the win. This really didn’t work for me, though some of the work was technically sound. The work of the ‘heel’ ref really didn’t help.

The last match before heading into the third week of February saw Barry Horowitz taking on Jerry Lynn for the GWF Light Heavyweight Championship, though only just. The pre-match weigh in had Eddie Gilbert swap the scales in order for his charge to make the 236lb limit – a random number but who am I to question? Horowitz is golden as the smarmy suck-up to the referee as he also talked up his own dieting efforts, with it good to see his character work considering how rare it is. Lynn is exciting but still awkward with it, using the ropes in an assisted armdrag that never quite looked crisp enough, nor did a second rope crossbody moments later. This continued with Lynn supposed to miss a top rope dropkick, but ending up landing somewhat of a senton to Horowitz’s legs instead.

Horowitz’s work on top is perfunctory, whilst he also managed to break a Lynn sleeper, which apparently was the move that won him the title. The finish is very Southern wrestling as Horowitz grabbed a knuckle duster from his trunks, though a punch was only enough for a one as an arrogant pin had Lynn roll Horowitz up for the win. A very average match that only served to highlight how awesome Horowitz is and how green Lynn still was at this time.

This was possibly the weakest selection of matches I’ve looked at so far. From the New Japan tag onward, things were either overlong in nature, overbooked or perfunctory. Not everything is going to be golden, but I hope for an upturn as we continue to dig into the offerings from February 1992.