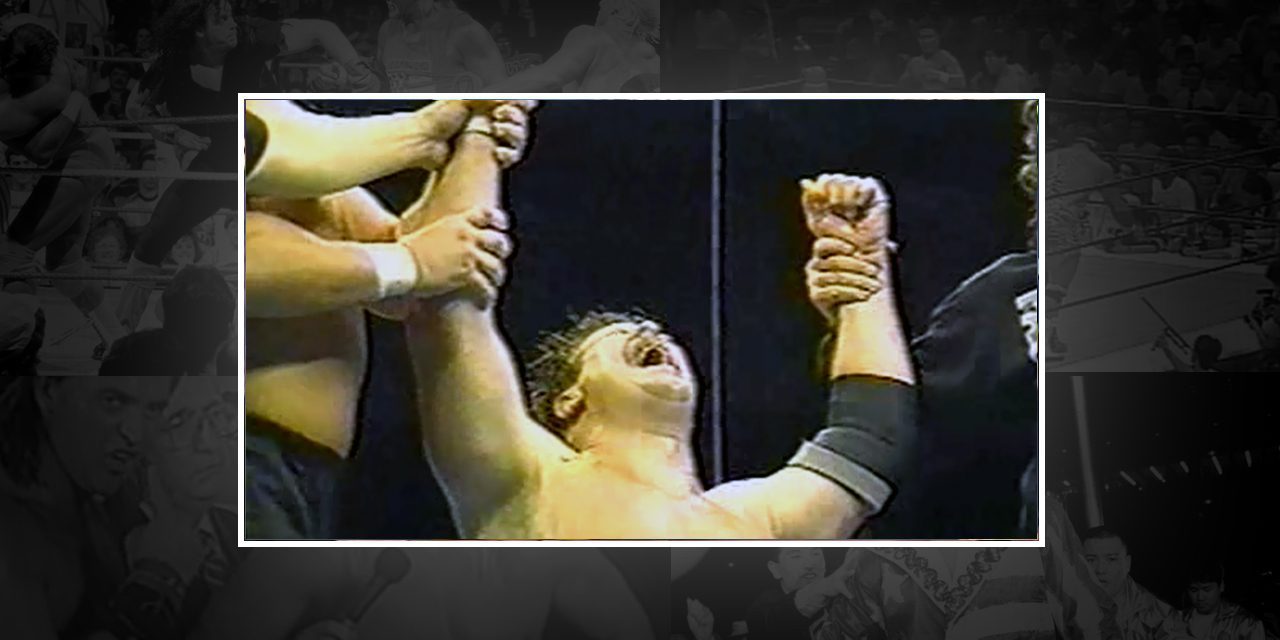 Finishing off the fourth week of the year, January 28 saw a huge AJPW Triple Crown Championship match as Jumbo Tsuruta defended against Stan Hansen. This felt a little at odds with Tsuruta’s recent matches against Misawa, Kobashi and Kawada, but Hansen is probably higher up the pecking order. I expected a hard-hitting showcase, yet that wasn’t really the case from the moment Tsuruta slowed Hansen down with a side headlock. The first exchanges were all about Tsuruta working Hansen’s arm; Hansen then attacked the leg of Tsuruta, including dumping it onto a table and then a chair on that same table for added impact. This all at least played into the finish as a lariat wasn’t enough for Hansen, Tsuruta couldn’t get enough power in his high knee, so Hansen hit another lariat for three. Interesting, but somewhat unexpected in tone.

A match from CMLL between Fuerza Guerrera and Octagon (champion) for the Mexican National Middleweight Title automatically gets kudos from me as they have a sword and martial arts demonstration as Octagon is being introduced. A handshake implied that they were friends, but as the groundwork and exchanges flowed, Guerrera seemed to get more annoyed that Octagon was coming out on top. This peaked in the primera caida with an errant swing allowing Octagon to duck, hit a leg sweep and apply a seated stretch for the submission. Things weren’t getting much better as Guerrera continued to charge into Octagon’s moves, though a short break at ringside allowed him to regroup and have some success unlike the primera. Fighting off an Octagon comeback, Guerrera took the segunda caida with a tiltawhirl slam and a modified bow and arrow.

Throughout the match, Cien Caras (corner for Guerrera) and Konnan (corner for Octagon) were very much involved in riling up the crowd and getting in each other’s’ faces. Once more, the tercera caida started with Octagon generally getting the better of Guerrera in the opening exchanges, not helped by Guerrera missing a second rope senton when he was in control. Guerrera ended up taking the Chris Hamrick bump through the middle and top rope in a great spot, though he didn’t exactly cover himself with glory with a top rope splash that never had a chance of reaching Octagon. They end up teasing the same finish as the primera, but the match effectively finished when Octagon hit a flying bulldog that wiped Guerrera out on a chair. Caras and Konnan get involved, forcing the ref to announce a double disqualification. A fun contest with a wild finish as Caras and Konnan duked it out in the ring, before numerous officials tried to work out what had actually happened.

Perhaps I shouldn’t have underestimated Bret Hart or the Undertaker but I wasn’t expecting much from their 1992 MSG match, primarily due to this still being ‘zombie Taker’ phase. However, this was a great match, starting from the moment Taker attacked Hart after the Hitman gave his glasses away. It takes the speed and athleticism of Hart, including a plancha to the outside, to take down Taker, though a hard chest bump into the corner immediately turned the tide back in Taker’s favour. Even the commentary is great as Old School gets Gorilla Monsoon and Bobby Heenan debating about the ‘external occipital protuberance’, whilst the crowd go berserk as the Hitman began to unleash some of his ‘five moves of doom’. Hart actually managed to apply the sharpshooter on Taker, but a scuffle between Hart, the official and Bearer saw the urn dropped in the ring. Even then, the first swing by Taker missed; alas, the second connected for the three count. Great little match.

The Undertaker is also involved in the next segment as we get the Wrestlemania VIII Press Conference. I’m not sure this could work nowadays, but it does feel very legitimate as Jack Tunney decided who was the challenger to Ric Flair’s title. Flair, who is wearing an awful jumper, started off things by suggesting that it didn’t matter who he fought as all five were in the ring when he won the Rumble. Roddy Piper, Randy Savage, The Undertaker, Sid Justice and Hulk Hogan are the options, and Tunney chose Hogan, though in a great moment Sid stood up just as the announcement was about to take place. We get a generic Hogan ‘Hulkamaniacs running wild’ promo, which is followed by Savage and Sid having their say. Savage is unhappy but wishes Hogan luck; Sid is furious as he should have been the champion and thinks Hogan only got the shot as he is a movie star. Simple build that is effective, even including the two that will end up getting swapped come PPV time.

Following a vignette with Papa Shango, one that has him roaring with laughter as he holds fire in his hands, a Funeral Parlor segment has Paul Bearer joined by Sensational Sherri. This is all about transitioning Sherri to Shawn Michaels from Ted Dibiase, with Sherri declaring her love whilst describing the man’s looks, body and wrestling talent. Mr. Perfect jokingly stated on commentary it could be him, but it is revealed as The Heartbreak Kid. With Marty out of the way, Michaels has more time to accept her love, whilst Ted Dibiase has apparently left the door open if Sherri wanted to return – he just wanted to see her happy. Martel is very hammy in this segment, but the Sherri/Michaels partnership made sense as she attached herself to the new hot heel.

As is often the way, there is a lot happening in Memphis, starting off with a Moondogs jobber squash over Chris Frazier and Brian Collins. A ropey looking Doomsday Decapitation ended the match within seconds, but the post-match lasted a lot longer as the Moondogs used the commentary desk to squash Collins in particular whilst Frazier ate several chairshots. It takes Eddie Marlin, several jobbers and Richard Lee himself to get the Moondogs to leave.

This segues into footage of The Moondogs versus Jerry Lawler and Jeff Jarrett, which I had said needed something in the matches to give it more interest. Well, they delivered as we joined the match in progress with Lawler hulking up, but wiping out the ref in the process with a chairshot. ‘Richard Lee’ is selling the fireball from last week with bandages around his face and Jarrett planted him with three piledrivers in a row. However, it wasn’t Lee, who turned up with an ether soaked rag and knocked Jarrett out for the Moondogs to retain the tag titles. I loved this bait and switch, and it continued to add heat to the Moondogs versus all that the feud had pretty much become.

Another neat spot was highlighted in the Dirty White Boy versus Eric Embry highlights. Embry had initially punched Dirty White Girl in the face after CJ had handed him handcuffs, but in the resulting scuffle with DWB, Embry managed to get his hands cuffed together! Rather than use this for a beatdown, the Boy and Girl instead pull down Embry’s tights and whip him, a move thankfully covered with a black dot so we aren’t subjected to Embry’s crack. Embry joined the broadcast after this to talk about getting his own back, focusing on taking both the Boy and Girl’s tights down and whipping them until they bleed, though he was soon ran off by a chair wielding DWB. The interview was oddly perverse, but the handcuff spot was novel.

The Memphis footage continued as the build to a Koko Ware versus Kamala match, though the Dennis Coralluzzo interview they air is in quite bad taste. Besides claiming Jerry Lawler owed child support, Coralluzo – in capacity as Kamala’s manager – talked about how Ware and Lawler were related, how Kamala was going to beat the black off of Ware, and that he had been eating too much fried chicken so he’d smell of it, so he couldn’t hide from Kamala. Ware’s response isn’t much better, just a little less racist as he focused on Kamala not being able to talk, before singing a random song before leaving. Very Memphis.

Still, on the same show, The Moondogs weren’t quite finished yet. Following an interview where Jerry Lawler promised that Austin Idol was going to be there (his partner against the Moondogs for the Coliseum the next night), the Moondogs jumped Lawler in the middle of a match. This brawl escalated: Jarrett came out; Richard Lee came out to keep the man advantage; Robert Fuller joined in; Flaming Star ran down and hit Fuller with a fireball in the arm (even though Dave Brown stated it was his face). Finally, it all built to the return of Idol as he waffled everyone with his suitcase the eventually burst open mid-ring, allowing Lawler to attack Moondog Spike with some shaving cream as well.

The post-brawl interview does take a turn for the weird, as Idol explained that he had had a phone call to tell him that someone tampered with his plane. Luckily, this was before Idol got on it and he discovered water in the petrol tank. Considering this could allow him to get airborne but would then cut out mid-flight, Idol declared that after all he has been through in wrestling, this is the first time someone has tried to murder him. As he talked about the Moondogs, his anger almost boiled over as he grabbed Dave Brown around the throat, before leaving after stating that he doesn’t get mad, he gets even. Idol’s whole persona is about being flamboyant and intense, but the idea of incorporating murder into a storyline is a bit much.

Things are a little more grounded for the final segment of the week as Jim Cornette is interviewed on an early episode of Smoky Mountain Wrestling. Cornette was the owner, so this gave him a chance, in character as Cornette the manager, to give his manifesto for why SMW mattered. It allowed him to take broadsides against the WWF and WCW for turning wrestling into a sideshow, focusing on selling toys rather than skill, and steroids being more important than anything. Alongside this, he was able to build heat as he ran down the local yokels. It is an excellent promo that worked on multiple levels. This also started the wheels in motion for Cornette managing a new team which I’m sure we will get to in time.

Outside of the fun lucha match and the Hart/Undertaker contest from MSG, what still is remarkable about this time period is how much Memphis manages to stuff into an episode of television in terms of angles, matches and brawls. They didn’t always get the line right necessarily, but it was definitely watchable. 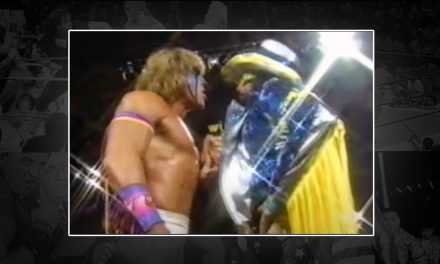