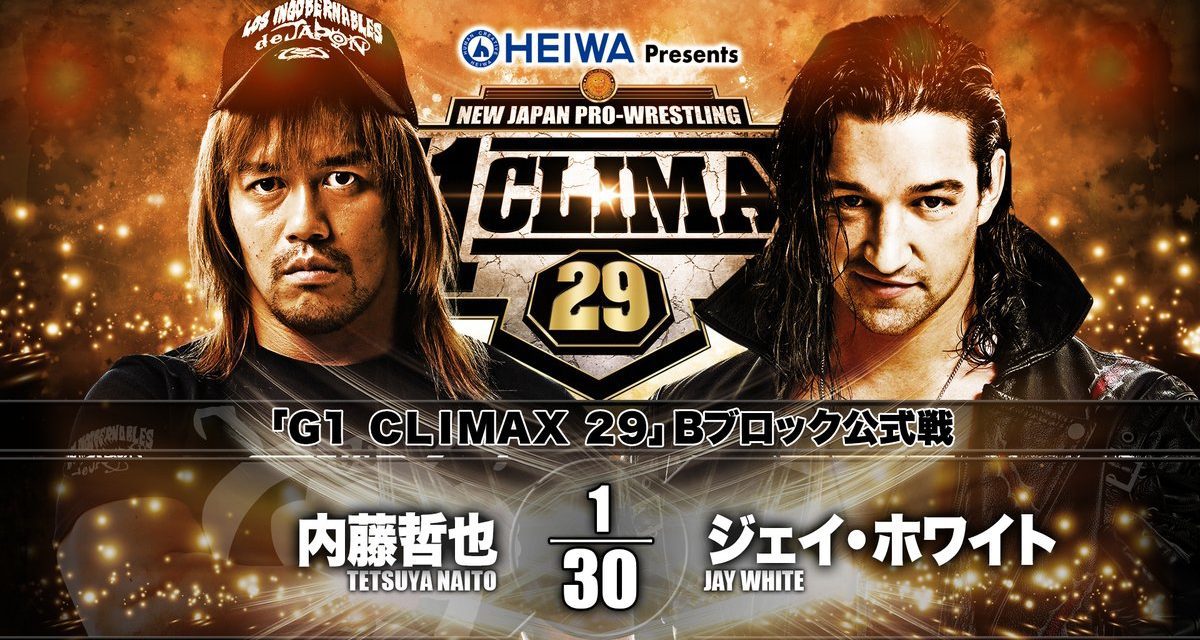 New Japan Pro Wrestling’s G1 Climax block action will wind down tonight at Budokan Hall with the final night of B Block competition. Unlike the A Block, which had only two true outcomes possible, The B Block has Jon Moxley, Tetsuya Naito, Jay White, and Hirooki Goto all tied atop the standings with 10 points, opening up a myriad of possibilities to determine the Block winner.

Sunday night will feature 3 matches of consequence to decide who will face Kota Ibushi in the G1 Finals on Monday.

On June 5th, Jon Moxley debuted in New Japan by defeating Juice Robinson in 24:14 for the IWGP United States Championship. In his final G1 Block match, Moxley will face Robinson in his first rematch in Japan. The Deathrider’s first fight against The Flamboyant One represents his longest NJPW bout and after a 5-0 start in the G1, Moxley has lost three straight. It seems apparent that the grueling schedule and high-end competition of the G1 has worn Moxley down. The United States Champion has lasted only an average of 9:40 in his unsuccessful bouts. Coming into the final night, only two wrestlers in the tournament have lower total elapsed match lengths: Toru Yano, and Bad Luck Fale.

Juice Robinson has fought hard to a less successful point total. Opponents have needed over 16 minutes to put Robinson away and when he’s won, he’s done so quickly and efficiently. Robinson can deploy one of two strategies to defeat Moxley: come out hot and try to finish him off in less than 10 minutes, or wear him down and try to finish him after the 17-minute mark. Juice’s average winning match length is 10:32, aligning pretty closely with Moxley’s average losing match length of 9:40.  If the bout goes over 10 minutes, Juice would be smart to work to wear Moxley down until at least the 17-minute mark. Moxley has had only one G1 match go over this mark (July 19 against Tomohiro Ishii) and while he was victorious in that bout, Mox’s recent results suggest that he’s struggling with his ability to compete in longer matches.

In a first time match up, Hirooki Goto will fight Tetsuya Naito’s Los Ingobernables De Japón stablemate, Shingo Takagi. Goto comes into the match riding the momentum of a four-match winning streak, and after being largely written off early in the tournament, he has quietly kept himself in contention with an opportunity to advance to the finals with a win and a Tetsuya Naito loss or draw. Goto has been steady, averaging 12:40 in his eight matches with his wins and losses averaging less than a minute’s difference from his mean.

In the other corner, Takagi relies on his stamina to keep his matches competitive. Shingo’s average match length comes in 32% higher than Goto’s with his average winning match length over 2 and a half minutes longer. The really telling stat is Shingo’s average losing match length coming in over four minutes longer than Goto’s. Takagi’s two most recent matches have each elapsed 22:00 and he showed no signs of fatigue. On August 4th, Takagi fell to Tetsuya Naito in over 27 minutes, and on August 8th, Takagi eliminated Tomohiro Ishii the B Block’s main event in 22:41.

While Goto has proven himself capable of winning long matches in this tournament, defeating Tomohiro Ishii and Jay White in 18:01 and 21:06 respectively, I’d expect Goto to attempt a quick victory over the motivated LIJ Junior Heavyweight to avoid tapping into Shingo’s late-match energy.

In the Main Event, Bullet Club leader, Jay White will battle Los Ingobernables De Japón leader, Tetsuya Naito in a match that is certain to clear up the block standings. These two competitors come into the match with remarkably similar stat lines, with less than two minutes separating their total match lengths. It is likely that both contestants will come to the match with very different strategies, but we can expect this match to be very evenly contested.

White enters the match holding true to the promise he made at 0-3 (and with only a 3.31% probability of winning the block), he intends on winning 6 straight to advance to the G1 Finals. The Switchblade is over 80% of the way there, coming into his match with Naito on a five-match winning streak.  White typically wins his matches in shorter order (14:08) than Naito (17:46), so expect the Bullet Club leader to enter the match with a plan to end it quickly and by any means necessary.

Naito’s path to this main event has been similar, bottoming out with a 3.23% probability of winning the block. He has steadily worked his way back up to where he was expected to be at the beginning of the tournament. The Los Ingobernables De Japon leader will most certainly work to avoid the antics of White’s corner team to sustain his chances of victory. Any time that White unsuccessfully uses trying to cheat his way to victory will work in Naito’s favor. The Tranquilo one has proven his ability to win long matches with a B Block leading average winning match length of 17:46, including a victory in the block’s longest match, defeating Shingo Takagi on August 4th in 27:15.

With four competitors left in contention, Jay White holds the highest Block Win Probability at 32.91%. His probability of victory has skyrocketed over the past two matches, driven especially by wrestler eliminations, Jon Moxley’s fall from the top (including White’s win over Moxley), and his best-in-block five-match winning streak.

Tetsuya Naito isn’t far behind White with a wBWP of 30.49%. A lot is working in Naito’s favor: strong match times, a three-match winning streak, a tie-breaker over Goto, and strong Win Efficiency.

Hirooki Goto’s slow and steady climb continues but his wBWP of 20.62% is largely held back by his aforementioned steadiness. While Goto has the second-best momentum of the group and key tie-breakers (Moxley, White), his match time and win efficiency metrics have been largely unimpressive. He also faces a strong and motivated opponent in Shingo Takagi on the block’s last night.

Jon Moxley’s fall from the highest probability in the block is staggering. His three match losing streak, low winning match time totals, and only one key tiebreaker (Naito) really drag down his chances of winning the block. Moxley will need a lot of help to come out victorious and he has a very motivated Juice Robinson directly in his path.