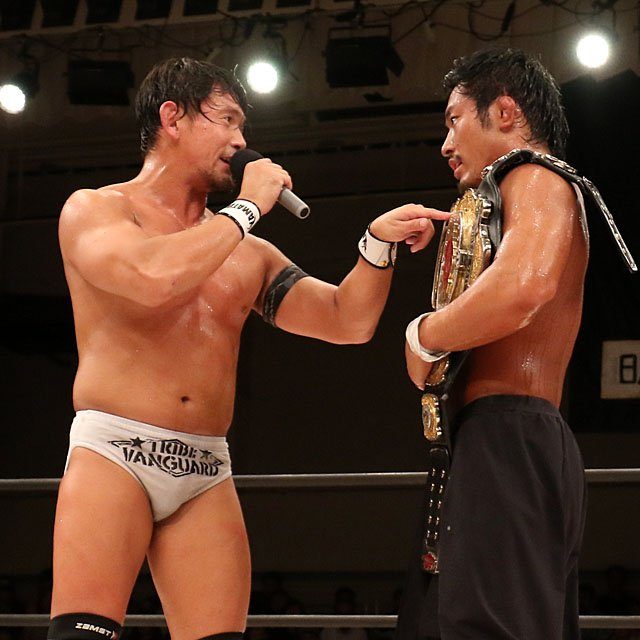 This match felt much longer than the typical Korakuen Hall openers, but I guess that’s what happens when you bring in big-time players like Mochizuki and Hulk. At Kobe World, I showed my concerns for the future of BxB Hulk’s career. He’s on a five year stretch of being constantly injured and his body is showing major signs of wear and tear, but between this match and what he did at the Fukuoka double-shot earlier in the month, Hulk is looking…better. I can’t say healthier. His body is in weird shape. He doesn’t have a ton of muscle definition, but he’s not as chubby as he was in the spring.

Martin Kirby made his Korakuen debut in this match. I noticed both here and in Fukuoka that Kirby can survive on his charisma alone. His crowd interactions have been very strong and his two signature spots so far, a complicated catapult that takes out two opponents at once, as well as his Milano Collection AT-tribute step-up enziguri, both get good reactions from the DG fanbase.

After a hot closing stretch, Yosuke Santa Maria planted Problem Dragon with Neraiuchi for the win. ***1/2

This acted as an extended squash for the Strong Machines against the lower rung of the roster. The cycle of the Strong Machine Formula has been broken and Strong Machine J has proven that he can work at a decent level outside of that specific match structure. He looked great and he hit his best Devil’s Windmill Suplex yet on Punch for the win. They still aren’t over to the level of their push, but they entertain me. ***

It’s unfair to say Hyo Watanabe has his swagger back, because he’s never really had this sort of confidence, ever. Watanabe now walks to the ring with the idea that he’s simply better than everyone else. He acts that way once the bell rings, as well. He took some accidental friendly fire from Okuda, so in return, Watanabe “accidentally” tagged him with a receipt. He did his best to protect Okuda when he was close to victory after nailing his Avalanche Triangle Choke (which should be in the running for move of the year), but when Okuda was unable to get the job done, Watanabe took matters into his own hands and executed Panther Clutch for the victory.

I really enjoyed seeing the Mochizuki Dojo kids go at it on the one year anniversary of the dojo forming. Everyone involved has improved a ton in the past year, with Watanabe being the biggest benefactor. ***3/4

After the victory, Watanabe set his sights on the Triangle Gate belts and named Minoura & Yoshioka as his partners. The rift between Watanabe and Okuda is far from complete.

Diamante appeared out of nowhere. He’s a lanky luchador in all black gear who immediately felt dangerous given his size and strength and the way he threw around his MaxiMuM opponents.

Sakamoto came into this match with a bandage over one of his eyes, which somehow makes him even more intimidating. Eye makeup, red & yellow braids, and now a huge bandage over one of his eyes. He has a look that makes him must-watch, and now nearly a year into his Dragon Gate run, he’s proven he’s one of the most consistent members in R.E.D. He was more impressive than anyone in this match and this was more of a showcase for Diamante than him.

In the end, Diamante was able to score the fall over Jason Lee with a folding powerbomb. I enjoyed his first outing but he didn’t do anything that blew me away. His look works with the unit – he’s big and strong, and that’s all that matters when it comes to R.E.D. ***1/4

This Natural Vibes trio held the Open the Triangle Gate belts from May of last year through December. At 231 days, they became the third-longest Triangle Gate champions before dropping the titles to a R.E.D. trio of Kanda, Kazma Sakamoto, and Takashi Yoshida at last year’s Final Gate. During that reign, Kzy was the focus of the trio. Each match gave him an opportunity to spread his wings and prove his worth, and it ultimately worked. He recovered from the Triangle Gate loss in December and transitioned into a short program with PAC, and their eventual match cemented the fact that Kzy was now a made man.

This time around, the focus is on Genki Horiguchi. He pinned Shun Skywalker in a singles match on the Fukuoka Day Show, then scored the fall on Jason Lee in the main event of the Night Show. He scored both falls with his dreaded Backslide From Heaven, then did the same to Shimizu in this match.

Eita, Shimizu, and even Kanda played their parts fine, but I’m now convinced that this portion of Natural Vibes could carry three brooms to a four-star match. Their chemistry is off the charts. Kzy and Yokosuka set the table with high-impact moves and big dives to weaken the bullies in R.E.D., but it was Horiguchi who delivered the death blow. I loved this match. I love the idea of a Horiguchi push. I hope he and Yokosuka challenge for the Twin Gate belts and then win them. This was sublime Dragon Gate six-man action. ****

I can’t get over how much fun Ultimo Dragon has been inside of a Dragon Gate ring. Even if the brunt of his matches have been carried by super workers like Yoshino, Doi, and Shuji Kondo, Ultimo Dragon is tearing it up when he gets in the ring. These are literally his best performances in years, possibly since he returned to the ring as a full-time competitor in 2003. A weight appears to have been lifted off of his shoulders and the Dragon Gate crew has structured these matches in a way to make Ultimo look as good as humanly possible.

The side opposing Ultimo in this match was a real hodgepodge of talent. Technically, this was a Jimmyz reunion (who could forget the epic run of Jimmy Kness J.K.S.), but more importantly, this team represented the second generation of Ultimo students. K-Ness, despite being trained in Big Japan, has been a Dragon System guy since their first full tour in February 1999, Ryo Saito represents the bridge between the original Toryumon students the T2P class, and Kagetora is a member of the forgotten Toryumon X class. Many people forget he got his start as SUWAcito, the miniature version of SUWA.

K-Ness is broken down, Saito is past his prime, and Kagetora is approaching 40. There was a real chance that this match could’ve broken down and gotten ugly, but everyone was on the same page at all times. Much like at Kobe World, this match peaked when Ultimo teased an Asai moonsault to the floor, only this time Ryo Saito played the role of Takuya Sugawara and pulled the legend off of the apron. Korakuen booed the typically loveable Saito and it was truly beautiful.

After Doi and Yoshino ran through their signature moves on Kagetora, Ultimo was given the spotlight and he milked his signature La Magistral to the fullest extent. It’s amazing what he can do with so little.

Screw workrate and stars, watch this match because it’s so damn fun. This is how pro wrestling should be. ***3/4

There’s a moment early in on this match when Ben-K and YAMATO are trading forearms in the middle of the ring. It feels a little out of place in Dragon Gate, especially in a post-Shingo Takagi era, but it works given that two of the companies top sluggers are the ones squaring off. The crowd watches Ben-K hit YAMATO with a forearm, then reacts when YAMATO gives one back. They watch again as Ben-K delivers a shot, but get excited when YAMATO serves one back. They rinse and repeat until finally, the strike battle concludes, Ben-K takes control, and the crowd mellows out.

At the end of the match, we see Ben-K boxing YAMATO’s head off with a combination of strikes. It’s now, after Ben-K has answered every one of YAMATO’s challenges throughout the match, that the crowd begins to react to Ben-K’s offense in an appropriate manner. He sucked them in, got them invested, and now he has their attention. I have no doubts that Ben-K’s run, no matter how long it may be, is going to be a success.

This match felt far removed from the Dragon Gate universe. Really, it’s shocking that a match main eventing Korakuen Hall was worked as stiff and as violent as this one and that the crowd reacted to it in a positive way. This style would’ve been more at home in the New Japan tag division, but it worked, and that’s what matters. KAI and Shun Skywalker had strangely strong chemistry with one another and Ben-K and YAMATO gave us a strong indication that their upcoming singles match at Dangerous Gate (a challenge that Ben-K accepted after this match) could be something special.

YAMATO planted Shun Skywalker with the Ragnarok for an emphatic victory. This is one of the best matches DG has put on in Korakuen all year. Highly recommended. ****1/2

The main event is set for #DangerousGate2019 on August 24th!

It’s refreshing to say that Dragon Gate has had yet another great outing at Korakuen Hall. I went back and my read review of last year’s Gate of Adventure to compare where the company was to where it is now. Last year, they had just begun to find their footing in a post-CIMA world. Big R Shimizu turned heel and Mochizuki Dojo formed, and those two things have been constant forces and driving charges in the year that has past. Hiroshi Yamato and KAI were abysmal on the show last year, whereas this time around Yamato was passable and KAI was legitimately very good. Dragon Kid and Eita are no longer feuding and the main event scene is filled with much more intrigue than it was at this time last year. Dragon Gate is in a good spot.

Gate of Adventure put forth Dragon Gate’s best assets and showed them off to the fullest extent. They have nailed every part of Ultimo Dragon’s run, Genki Horiguchi and YAMATO have been properly elevated up the card, and Ben-K has taken the right steps on his path towards legendary status. Thumbs up for 2019’s Gate of Adventure. 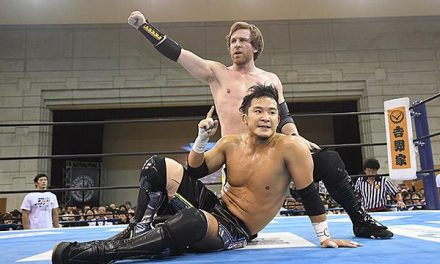 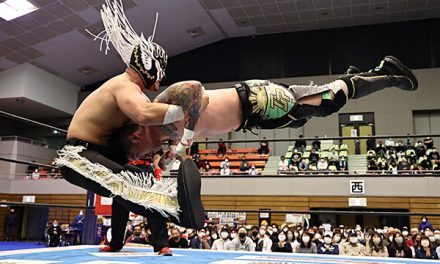