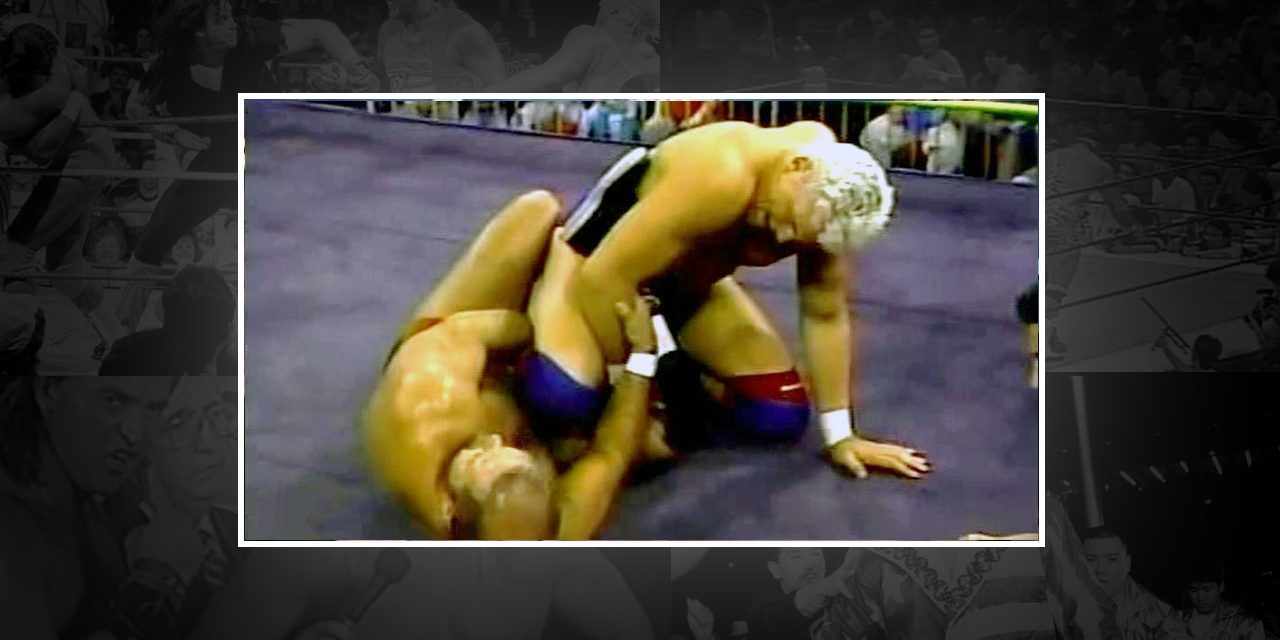 With a huge few days in American wrestling last week, the focus shifts a little as we get some action from puro from Japan and lucha from Mexico sprinkled in amongst action from WWF and Memphis.

First up is a six-man match between the team of Mitsuharu Misawa, Kenta Kobashi and Toshiaki Kawada and the trio of Jumbo Tsuruta, Masanobu Fuchi and Akira Taue, Taue swapping in for Yoshinari Ogawa compared to the match earlier in the month. It is joined in progress. This match really sells Tsuruta as the end level boss of his team, as anytime he was in the ring he was in control, whilst Fuchi and Taue often feel the brunt of their opponents’ offense. Dickhead Fuchi was back though, targeting Misawa’s legs to slow things down and the future ace suffers through a prolonged assault on his limb, with Fuchi using the ropes in particular to good, joint-wrecking effect. This built up nicely to a tag to Kawada, who wrecked Fuchi’s shit in retaliation.

The best exchanges were often Tsuruta and Misawa, as might be expected. Misawa battled on valiantly with an injured knee and the fans cheered him on at every turn. The finishing five minutes were intense, including Kobashi kicking out of a Nodowa Otoshi, a backdrop driver and a powerbomb. A second Otoshi by Taue finally put Kobashi out, who was never going to survive such an onslaught of high-end offense. The match itself lulled a little in the middle, but had hot opening and closing sections.

After a Royal Rumble report which was mainly about announcing Ric Flair’s title victory – including a promo in which Mr. Perfect proclaimed he was perfect to predict Flair’s win – we get a vignette for a debuting superstar in the WWF. A quest for purification, courage, respect and honor is how a run in the WWF is sold, as Tatanka believes that when the shaman brushes him with his fan-made of eagle feathers, he will know that he is pure, his soul is cleansed and he will soar like the eagle. I always forget how early, or at least how early it feels, Tatanka came into the promotion and at least the Native American theme is being used on someone who is a member of a tribe, rather than just anyone who looked the part. This also signals the debut of one of the best/worst (your mileage may vary) themes of all time.

The action – as always – is hot and heavy in Memphis as we get to see the Jerry Jarrett and Jerry Lawler fight against the Moondogs that had been built to last week. This is very much a contest built around the face team getting revenge over the heel team as Jarrett and Lawler monopolize control with liberal use of chairs, chains, bins and tables. A chairshot to Jarrett was the first real offense from the Moondogs, though Lawler soon quelled the uprising with a bin throw. The stiffness of the tables lead to some neat spots as they are used as landing spots for Irish whips or chucked at people with reckless abandon. Richard Lee’s presence does eventually give the Moondogs some offense, focused primarily on chairs and chain shots as well, but just as things turn back in favor of the fan favorites, Jarrett punched out a referee that aimed to get in between him and a Moondog. A second referee was wiped out as things continued to escalate. A fun brawl as always, though it does feel like there are somewhat diminishing returns until something significantly changes about the matches, the gimmicks or the stipulations.

Another match from the same show was a Strap Battle Royal which focused primarily on Tony Anthony versus Eric Embry as the final two competitors. Elimination was via leaving the ring in general, and with Embry eliminating Tom Prichard, he was left with what appeared to be his recent nemesis in Anthony. A great touch saw Embry pull down his strap, only to put it back up as he realized he didn’t want to trade punches with Anthony. The bulk of the last exchange had Anthony whipping Embry, eventually leading to Embry getting tied in the ropes. From there, CJ (Embry’s valet) threw powder in Anthony’s eyes, allowing Embry to get free and eliminate Anthony. CJ isn’t exactly wearing much, seemingly to set up for Anthony whipping her on the backside several times post-match. Embry naturally takes exception and ends up sending Anthony back into the ring for a couple’s beatdown until several faces hit the ring to run them off.

As this is being shown on Memphis Television, we get an interview following the clip with Eric Embry and CJ. The focus is very Memphis and 1992 Embry talked about how it was really embarrassing for Anthony to get whipped by a woman. Apparently, Anthony went to Eddie Marlin to request another match, one that leads Embry to promise that CJ will whip him so hard this time that she’ll make him bleed. Embry plays a decent smarmy heel, whilst the match itself was a simple way of escalating the feud without burning through a singles match.

After a fired up Barry Windham interview, post-Clash, that saw him threaten Larry Zbyszko against the wishes of his own doctors (The Dangerous Alliance having injured Windham’s arm), Arn Anderson and Dustin Rhodes compete in another chapter of the Dangerous Alliance/WCW feud. The overarching narrative of the two segments is that Paul E. Dangerously stopped Windham from being at ringside as he didn’t have a manager’s license. Some simple feeling out leading to a Rhodes right hand that puts Anderson on his arse was a great start to a match between two of the greatest television wrestlers to have ever existed. In some brilliant heeling, Anderson feigned injury and used a distraction by Dangerously to plant Rhodes with a DDT.

The arrogance permeated Anderson’s remaining offense as he loved every moment he got one over on the Natural. This also helped to build to Rhodes’ comeback as the less experienced wrestler used his pluck, and the support of the fans, to fight his way back into the contest. One awkward spot saw Rhodes go to the top and then come back down to apply a sleeper, though this felt like it was to move directly to the finish. Rhodes had Anderson beaten with a bulldog, so Zbyszko hit the ring to cause the disqualification and spark all-out war. This is all to build to Windham attacking Steve Austin’s leg with Dangerously’s phone and a figure four in a revenge attempt. A strong angle following a more than adequate television match, if one that was a little shorter to fit in the post-match fighting.

Kenta Kobashi had a chance for revenge in the next match as he teamed with Tsuyoshi Kikuchi to take on Jumbo Tsuruta and Akira Taue. He clearly realized that as the first minute saw him through Kikuchi out of the ring and on top of Taue, as well as using his partner in a back suplex into a splash that also caught Taue.  This fast-paced start allowed them to isolate Taue, the importance of which was emphasized as Kikuchi struggled to keep him in their corner in a nice touch. Tsuruta is the trump card though and when he is unleashed he almost took Kikuchi’s head off with a big boot. Kikuchi as crash test doll just works and the de facto heel team milk their attack on Kikuchi for all it is worth. This helped to get the crowd behind him for any brief flurries of comeback, before building yet more heat when they were cut off, such as the time Tsuruta brutally kneed him multiple times in the head.

Kikuchi also was very effective at being evasive, dodging strikes from Taue to help shift the momentum in their favor. That is, until Big Boss Tsuruta battered everyone who stood in his way. The guy was the best at just clearing a ring with intensity and impact. This representation of him as the often immovable chief makes all offense and nearfalls scored against him that much more entertaining for the fans. This time, it is Kikuchi who managed to survive some stiff offense, including a Nodowa Otoshi and a powerbomb, but even he can’t kick out of a backdrop driver by Tsuruta. Really fun match, especially due to the big man/little man exchanges with Kikuchi versus anyone.

The final match this week sees a singles match stemming out of a tag match from earlier in the month – Pegasus Kid versus Villano III. In an interesting turn of events, this is for the WWF Light Heavyweight Title (with Kid the champion), one that rarely saw action outside of Mexico or Japan. The Primera Caida focused primarily on Villano III working Kid’s legs, even seeming to ignore rope breaks and just pull Kid back into the middle of the ring whilst still in the hold. This lack of respect probably explained the added venom in a clothesline and backbreaker when Kid broke free. This was more about groundwork than anything, though Kid bashed his head hard as Villano blocked a victory roll by just dropping backwords. Choosing to win the caida with a top rope headbutt probably wasn’t the best of ideas, but Kid was 1-0 up.

I’d felt the primera caida was long – the segunda caida was over in seconds as an irate Villano attacked both Kid and his cornerman, wrapped him up in small package and got the caida. The decisive tercera caida went back to the groundwork from the primera initially, but the overall pace picked up as exchanges and reversals ended with a plancha by Kid. A second attempted top rope headbutt saw Villano get his knees up into Kid’s stomach, but Villano also missed on a top rope senton. In a surprising finish, as I expected Villano to win, Kid took the caida with a variation of a bow and arrow, though there is some controversy as to whether he quit or not to finish. A decent, if unspectacular match – one that doesn’t play to my overall wrestling interests more than anything.

Whilst this week probably wasn’t as strong compared to last week’s bumper crop of matches, the All Japan stuff, in particular, is really worth digging out.