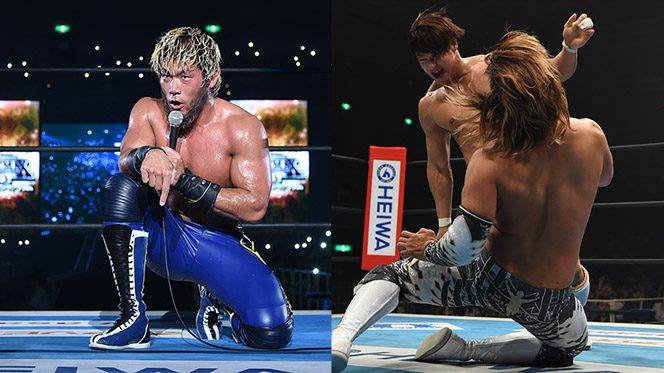 Gerard: This was thankfully kept short at a little over seven minutes. I thought KENTA tried here but of course everything else was pretty predictable here with interference from Owens and Jado. I thought KENTA was somewhat protected here as Fale got the win with a School Boy as KENTA was trying to take the kendo stick away from Jado. This was certainly not the most offensive Fale match out there. **1/2

Paul: This match was good by Bad Luck Fale standards. KENTA was on offence for most of this, which helped the quality of the match and was a nice change from most Fale matches. However, at the end we did get the usual Bullet Club interference nonsense. I get why Fale is in the tournament, but that doesn’t make his matches any more enjoyable.

KENTA took one hell of a plunge in this tournament. He went from unbeaten to eliminated within two matches. At best he can draw with Okada, but Okada holds the tiebreaker over him. But New Japan likely still has big plans for him going forward and it’ll be interesting to see how the rest of the year plays out for him.

Gerard: This was a styles clash, but in the best way possible. I thought the transitions between ZSJ’s submission based offense and Archer’s power moves were great. And the size difference between Archer and ZSJ, did not make for a strain on my suspension of disbelief thanks to how well they worked together here. Perfect finish too with ZSJ wiggling out of the Blackout to pin Archer with a Crucifix. Certainly not the best match in the tournament, but one of the matches that I had the most fun watching. ***3/4

Paul: Both men are already eliminated so this is just for bragging rights. Archer really feels reinvigorated since the gimmick change and his work in this tournament is the best run he has had in years. Not only but he also carried Fale to his best match in the G1, which is nothing short of a miracle.

This match had a nice power vs technique dynamic. ZSJ was slithering all around Archer trying to find any angle to nail him down. Archer really made ZSJ work to lock in his holds, which properly established the difference in power. The best spot in the match was Sabre countering the Derailer into a choke. Afterwards Archer gets the upper hand and starts laying in his devastating looking offense. But in the end Archer gets too cocky. ZSJ manages to reverse the Blackout into a choke and then a rollup for the win. With that win he continues to set himself up to play spoiler for other guys later in the tournament. Really fun match.

Gerard: I think highly of both EVIL and Ospreay, but I did not realize just how great their chemistry together is. This was a good back-and-forth match with both guys unloading a ton of offense on each other here. Unlike a lot of Jr. vs. heavyweight matches in New Japan’s history, Ospreay is really able to hang move-for-move with the big boys. I also like the story of EVIL being the smarter and more cunning wrestler here which allowed him to ultimately gain the advantage and put away the flashier Ospreay. I have to admit at this point in the tournament, given the ongoing storyline around Ospreay’s neck, I cringed when EVIL landed two Half-and-Half Suplexes during the final sequence of the match. As Ospreay moves into the heavyweight division, I look forward to future matches between these guys, I think they have something even better in them. ****1/4

Paul: Ospreay is already out of contention for the block but, if he wins he will eliminate EVIL and help out his stablemate Okada. The match is a bit slow early on but picked up a lot as it went on. Ospreay reversing the EVIL STO into a powerbomb was a great spot. During the closing stretch, the match became great. Ospreay is becoming one of the best in the world at hot closing stretches. He also feels like he belongs in the heavyweight division now and I’m looking forward to him rising through the ranks there now. Evil gets the win and stays in contention for the block.

Gerard: The long awaited rematch from last year’s G1 Climax finals. While not as spectacular as last year’s final, this match was still very emotional. I am very much digging the simple and (relatively) more safe style that Tanahashi has been working this tournament. I have loved all of his matches so far and I think his performances should be studied. They kept things simple early on and went after each other’s legs and built it up from there in a way that only guys their caliber or worker can do. But Tanahashi’s ambition to fly despite his bad knees got the best of him, as he missed a second High Fly Flow and then Ibushi put him away with a Bomaye followed up with a Kamigoye. Ibushi was in tears following the match and this very much felt like a passing of the torch here, as saving for some convoluted tie at the top of the A Block after the final night, Tanahashi is basically eliminated. What a match by two masters of the craft. ****1/2

Paul: This is a rematch from last years G1 final. Tanahashi working over Ibushi’s “injured” ankle early. Ibushi flips his switch and him and Tanashi are just laying in strikes on each other. Ibushi bleeding from the mouth after the exchange. These two know how to whip the crowd into a frenzy perfectly.

There will come a day when Tanahashi will no longer be able to jump over the ropes for the High Fly Flow and will be a sad day. Ibushi puts Tanahashi away with the Kamigoye. The ending felt decisive and like a passing of the torch moment. Ibushi is now solidly above Tanatshi in the pecking order.

Gerard: I have loved the previous matches these two have had this year. They did not disappoint here either. There were some clichés here as you could tell very early on in the match because of they way they worked they were going 30 minutes or very close to it. I get that some may not like the first 10 or 15 minutes of this match. But the early mat and limb work these guys do in their matches have always managed to hold my attention. I was in fact higher than most on their title match at Wrestling Dontaku this year. So I thought this was pretty great throughout with a solid build. This match went 29:47 and they did a great job here of making you wonder if this was just going to end up going to be a draw. The finish was pretty definitive with SANADA reversing a Rainmaker attempted and then he hit two Moonsaults for the win. Another fantastic showing from these two, which has been a low-key feud of the year candidate. ****1/2

Paul: Very minimalist match and felt very much unlike most big New Japan matches. SANADA came into this match having lost two big matches against Okada this year. So it was put up or shut up time for him.

The crowd is absolutely molten for this match. SANADA keeps on going back to the Skull End and every time Okada manages to get out SANDA just locks it back on. He is just wearing down Okada but he is also wearing down the clock. This match is just seconds away from being a draw when SANDA manages to hit the moonsault for the win. Perfect finish and a massive win for SANADA.

Gerard: My final thought here is pretty straightforward: This was the best overall night of the G1 Climax this year so far.

Paul: Overall an excellent night of the G1 all. Every match delivered and even the Fale match is worth a watch, which is really saying something. While I don’t think any of the matches are in contention for match of the tournament they were all great. 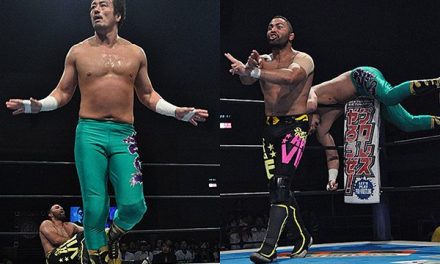 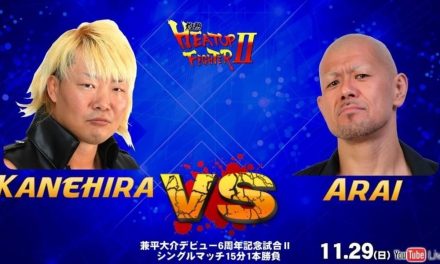 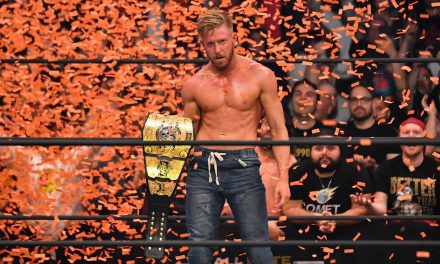