I am not sure whether it was the audio issues that Billy Kirkwood and James R. Kennedy had on commentary during this match that took me out of it or what, but this didn’t work for me. That’s a shame, as I love More Than Hype’s work over in Ireland and this match was supposed to mark the ICW returns of Williams and Rees, with the latter trying to get over his new ‘Quintessential Athlete’ gimmick. It seemed as though these five didn’t really click and the match, whilst technically sound, never got going. The finish came when Rees hit Alpha Waves on all three members of More Than Hype, draping Williams over Cleary for the pin. **1/4

These two opened the match by playing up to ICW’s ‘No Disqualification’ ruleset, with Aivil laying into the champion with kendo stick shots and Kasey firing back by throwing chairs into Aivil’s face. I had no issues with those bells and whistles given the history between these two women and the fact that Aivil is still a little rough round the edges. However, what I do take issue with is the fact that only about three minutes in Rampage Brown and Ashton Smith, who are also managed by The Wee Man, came out and distracted Aivil, allowing Kasey to hit her with the chair again and get the quick win.

If you have a nine-match card and you want to keep it to three hours I understand you have to cut some corners and run some matches short, but why do that to a title match? It did nothing for either woman and was a very annoying start to the show. *

Post-match, Brown & Smith looked to take out Aivil with a shoulder-breaker, only to be stopped by The Purge, leading us, in true Heyman-esque fashion, into our next match…

This wasn’t quite the perfect antidote to the two damp squibs that had started the show, but it was easily the best thing on the card so far.

It may have only lasted about eight minutes and been rather formulaic in its execution, but it was still fun and gave The Purge, a team I think have improved a fair bit in the last year or so, a relatively big win over the former champions. Brown & Smith appeared to have the match in the bag after taking out Krobar with a chair and hitting James with a superkick-assisted uranage, but James kicked out and moments later he pinned Smith after landing a double-stomp piledriver in the middle of the ring. **3/4

I have tried and tried but I still cannot think of anything to say about this match. It was a match that happened on this show, lasting about eight minutes. Coffey worked over Wild’s back in a rather dry, methodical way, Wild got a bit of a comeback before getting distracted by Coffey’s masked accomplices, allowing the former Zero-G champion to get a roll-up. Dry as toast. **

As the two wrestlers made their entrances for this match, Kirkwood and Kennedy did a good job of explaining the significance of this match. Coffey, the champion, is still widely regarded as the best wrestler of his generation from Scotland, whilst Thomson is a solid hand who has had his ups and downs in wrestling and has never got close to singles gold in ICW. They managed to convey a sense of occasion, one that was followed up by the match and the crowd, who, after being fairly flat for the first four matches, really came to life in this one.

Coffey worked the match in a dominant fashion, using his size advantage to wear down the smaller Thomson, who rallied back with missile dropkicks and strikes, only to inevitably get cut off again. Those missile dropkicks would play a factor in the closing stretch, as Coffey pulled referee Thomas Kearins in the way of one in the corner. Ref bumps aren’t my thing, most people know that, but it worked here as it allowed Coffey to do a full Triple H tribute act – there was a low blow, a Pedigree, Coffey spraying water on the apron and even a sledgehammer – before destroying Thomson’s beloved sink. Those things put together rallied the crowd behind Thomson once again, with the ‘Bad Boy’ powering out of Coffey’s discus lariat before hitting two backstabbers for the win. Liam Thomson finally has singles gold in ICW, and this was worked as well as it could have been. ***1/4

I was admittedly a little worried about this one as Krieger hasn’t impressed me that much in the past but truth be told he did well here against the veteran Robinson, delivering his best ICW showing to date. Robinson no-sold a big powerbomb into some tacks at the end, throwing some into Krieger’s face before hitting a double-stomp into them after taking out the knee he had worked over early in the match. Simple but effective stuff that established Robinson’s shtick well. **3/4

Post-match, Robinson took out Krieger’s knee with a chair before cutting a promo on how he was the hardest bloke (less polite terms were used, obviously) in Glasgow. That drew a reaction from Krieger’s Fite Network stablemate Kid Fite, with him and Robinson having a pull-apart brawl to end the segment. The crowd for that brawl were as loud as any ICW crowd in some time – they’re onto something with Robinson I think.

Joe Hendry may be gone from ICW (for now at least) after losing this match but in the process, ICW seemed to have unearthed a real future star in Buzzard, who delivered a breakout performance in this match.

Buzzard demonstrated great agility, delivering a couple of beautiful dropkicks as well as a tope into the crowd. It wasn’t perfect and he’s still a bit raw, but his performance here added a level of dynamism that is so often lacking in big Hendry matches. Buzzard was able to hit a fallaway slam as well as a perfectly-executed 450 for a couple of nearfalls, whilst Hendry came close to a win after hitting a low blow and a Freak of Nature. With every kick out and move Buzzard captured the crowd a little bit more, and eventually got the win after channeling some of his mentor Lionheart with a big uranage and another 450 for a big win. The youngster got organically over in a match that peaked well – ICW have a potential star with him, they just need to use him in the right way. ***1/2

After the match Hendry cut a brief promo to say goodbye to the ICW fans, telling them to get firmly behind Buzzard if they like him and want him to succeed.

Early on in this match, Aaron Echo’s legs or back gave out on a powerbomb attempt and that sort of told the story of the match – good ideas, just a little lacking in the execution. The match was perfectly fine but it felt quite formulaic and never felt like it had any flow or real spark to it. It started hot, with Echo and Kelly attacking before the bell, but that was about the hottest point as The Kings went on to win, with Bonesaw pinning Kelly after a pop-up cutter. **1/2

For the second successive year, Jackie Polo main evented the first night of Shug’s Hoose Party. While this match lacked the emotional edge his contest with Lionheart had in 2018, Polo delivered one of his best career showings for the second year in a row.

The match was well-worked, with a logical increase in pace, tempo and drama as it progressed. KUSHIDA outclassed Polo on the mat in the opening exchanges, which led the former ICW World Heavyweight Champion to use his size and power advantage to ground his Japanese opponent. This gave Polo a sense of arrogance, which allowed KUSHIDA to fire back from underneath only to get cut off again.

KUSHIDA gave Polo a lot here but Polo kept up his end, keeping the control segment of the match interesting and producing good, tight work. Polo looked to hit a superplex at the end, only for Kushida to reverse it into a DDT and synch in the Hoverboard Lock for a submission victory. ***1/2

In the post-match, Kenny Williams came out to challenge Kushida over them both using a Back to the Future-inspired gimmick, only to get sent packing by Polo and the visiting NXT star. Polo then cut a genuine promo about currently having no material and no plans in ICW, before saying that he would be taking an indefinite break from the promotion. This was good stuff to end the show and we got to hear that ‘Just Justice’ theme one more time, which is always nice.

In many ways, this show was a microcosm of much of ICW’s history – some good, some bad but nothing that particularly sets the world alight.

As things go, this was an easy watch that certainly got better as it went on. Polo/Kushida was probably the best match of the night and a good main event, but the highlight for me was the breakthrough performance for Leyton Buzzard. This show sets the stall for a better night two, but I said that last year and then night two ended up not being that good… 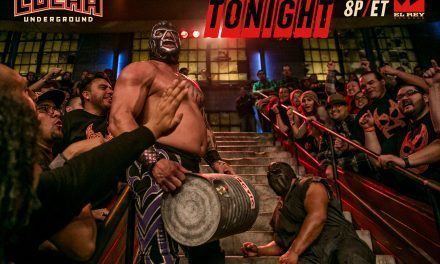