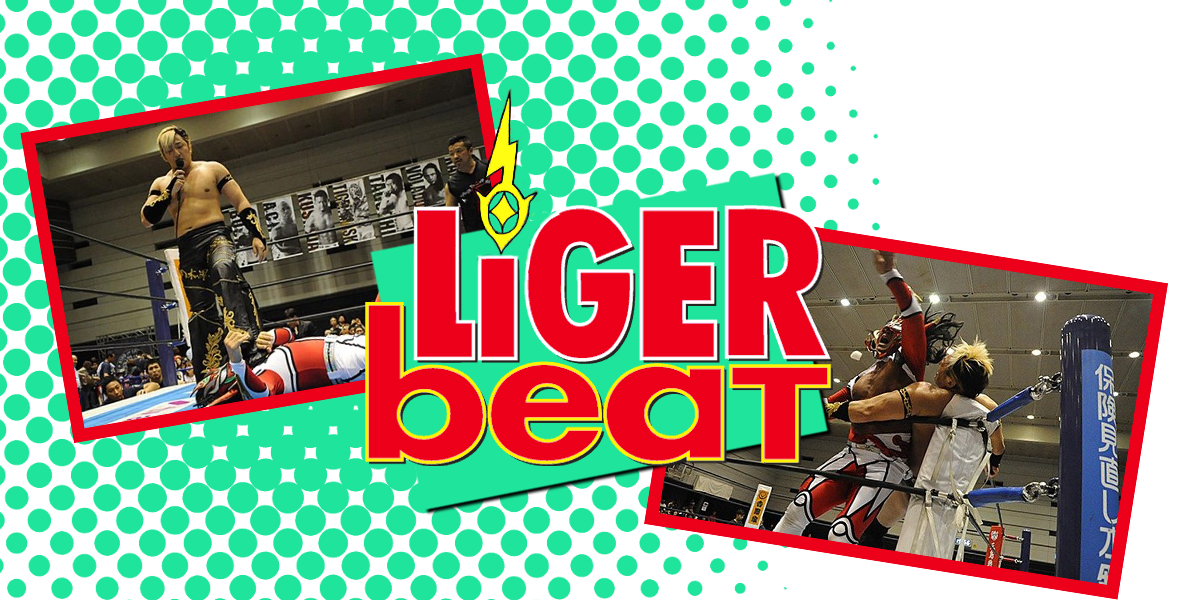 Jushin Thunder Liger vs Taichi in the 2017 Best of the Super Juniors is a truly historic match, as the prestigious tournament waves goodbye to an absolute legend of the sport with Liger’s final appearance.

This was Taichi’s seventh and final entry into the competition, having previously entered in 2007 and 2009 (scoring four points each), and every year between 2011-2014 (scoring eight points). Taichi had never won the competition before, and both men found the odds stacked against them in a star-studded block that featured current WWE superstar Ricochet, former IWGP Jr. Heavyweight champions Dragon Lee, Marty Scurll and Hiromu Takahashi, and current IWGP Jr. Heavyweight champion Will Ospreay.

To the surprise of many (but not me), the A Block finals on March 31 saw the Holy Emperor Taichi begin the day joint top of the block with eight points, holding wins over Dragon Lee, Marty Scurll, Taka Michinoku and Will Ospreay. All Taichi needed to do was beat the winless Liger to win the block, and he would’ve triumphed through a murderers’ row and surely cemented his place as a legend of the sport alongside Liger himself.

Liger, as mentioned, sat rock bottom of the group with zero points. He had declared this to be his final foray into the tournament, and in true NJPW fairytale style, had lost all six of his previous matches. As this excellent column by Dylan Justin describes, time had caught up with Liger and he simply could no longer hang with his stronger, faster, more innovative peers.

Many people had hoped for one last triumphant run for Liger, a hail-mary victory in the tournament that would see him get what could be his final shot at the IWGP Junior Heavyweight championship to send him off into the sunset. But just ask Hiroyoshi Tenzan about his 2016 G1 Climax; real life (and New Japan booking) doesn’t always have a happy ending.

Moreover, Liger and Taichi have some history in New Japan.

At Dominion 6.16 in 2012, Liger and Tiger Mask IV faced Taichi and Taka Michinoku for their IWGP Junior Heavyweight Tag Team championships. During the match, Taichi started tearing the mask of Liger, which led to the reappearance of the demonic Kishin Liger. Taichi was punished with the red mist and a powerbomb through the table. Suzukigun ended up losing the match, and their titles.

So in what looked like a cakewalk for Dangerous T, would he learn his lesson from five years ago and stop his ego and cruelty from incurring the wrath of Kishin Liger?

BEST OF THE SUPER JR. XXIV A BLOCK
JUSHIN THUNDER LIGER (0) VS. TAICHI (8)

No sooner has Liger removed his cape, assisted by Young Lions Tomoyuki Oka, Hirai Kawato and Katsuya Kitamura, than he is assaulted by the dastardly Taichi and his microphone stand. Then Liger is encircled and stomped into oblivion by Taichi, Yoshinobu Kanemaru and El Desperado. Things are looking grim for Liger.

Taichi grabs the microphone, telling Liger that he isn’t graduating from BOSJ, he’s being retired by Taichi tonight.

“Hey Zu-Liger (Zura means “a wig” in Japanese *officially it’s ‘katsura’, zura is kind of a slang. As Japanese doesn’t have difference in pronunciation of ‘r’ and ‘l’, Taichi puts ‘Zu’ before his name to tease Liger that he’s wearing a wig, and to make his name sound stupid), you said you are graduating from the best of the super jr this year, huh? No, you’re wrong. Final BOSJ official match today? Graduation? Wrong, you’re retiring TODAY! Let us begin his farewell match now! Strike a gong!” -Taichi

He continues to stomp on the shell-shocked Liger, and referee Marty Asami feels this is an appropriate time to begin the match and the bell is rung. Liger is promptly tossed out of the ring where Kanemaru and Despy resume the stompage.

Taichi eventually drags Liger back into the ring and disrespectfully kicks his downed opponent as heart “Liger!” chants ring out through the arena. Liger uses this as fuel for his comeback, reversing an Irish whip and landing a tilt-a-whirl backbreaker to gain the advantage. This lasts a matter of seconds before Despy grabs Liger’s ankle and pulls him crashing to the apron. You begin to understand why Taichi (and Suzukigun in general) were so despised back in 2017.

Taichi rams Liger’s shoulder into the ring post and chokes him with a cable. The fight spills into the crowd where Taichi (very gently) tosses Liger onto some chairs, grabbing a third to drive into Liger’s throat before returning to the ring and demanding the referee starts the count.

Liger makes it back inside the ring by 19, despite having his head rammed into the announce table. Kanemaru distracts the referee while Taichi bops Liger on the head with the handle of the ring bell hammer and then proceeds to choke him with it, gurning maliciously at the crowd. 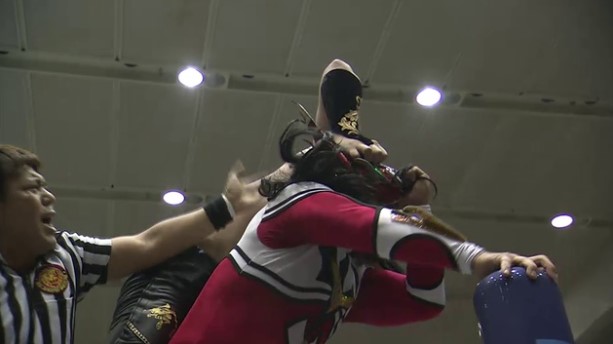 Fill in another square of your SZG Bullshit Bingo Card, as Taichi sits Liger on the top turnbuckle and attempts to unmask him until he is stopped by Asami. Liger tumbles back to the mat and Taichi goes for a quick cover for a two-count. We’re already five minutes in and have had two wrestling moves performed thus far.

Liger fires back with a vertical suplex. He misses with the shotei and eats a high kick and a buzzsaw kick from Taichi and another two-count. Taichi whips his trousers off and drills Liger with a Tensho Jujihou (superkick) for yet another two-count, much to Taichi’s chagrin, who remonstrates with the referee. More Liger chants from the fans, who are desperate to see their hero prevail in his final BOSJ match.

Liger yet again draws strength from the crowd and reverses a powerbomb attempt into a backdrop, followed by a shotei. Taichi, realizing he’s in trouble, pulls the referee in the way of another incoming shotei, which flattens poor Marty Asami. Future IWGP Jr. Heavyweight Tag champs Kanemaru and Despy hit the ring yet again, laying the boots into Liger, whose mask is now hanging half off of his face.

Another referee hits the ring in an attempt to restore order, only to be knocked out when Taichi tosses the lifeless Liger into his back. Kanemaru and Despy hold Liger’s arms while Taichi brandishes a pair of scissors and begins to cut away at Liger’s luscious locks of hair. (And as Bad Boy Hido learned back in 2006, doing so is asking for trouble.) One of his horns has snapped, the mouthpiece of the mask is dangling precariously, and Taichi now begins to cut away and tear Liger’s bodysuit, exposing his (incredibly hunky for a 52-year-old) chest.

Taichi grabs a chair from under the ring to finish the job, but his party is spoiled by KUSHIDA and Ryusuke Taguchi, who have seen enough and decided to help Liger. Could’ve done that in the first minute, lads, but okay. They take care of Nobu and Despy, while Liger disarms the chair-wielding Taichi with a koppou-jutsu abise-geri (rolling koppu kick). He channels the spirit of Kishin Liger and follows up with another shotei, a release powerbomb and a brainbuster for the 1-2-3. Liger wins his final BOSJ match, and prevents Taichi from reaching the finals. 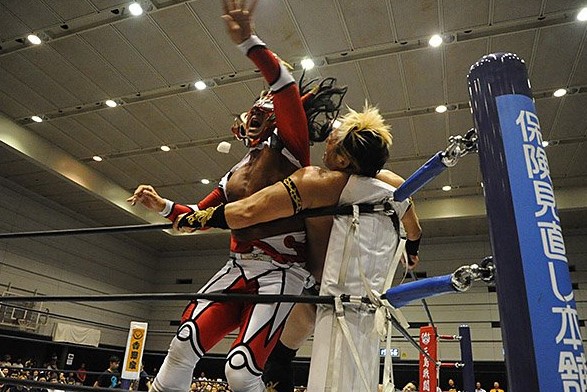 Liger is congratulated by Taguchi and KUSHIDA. He grabs the mic and says he owes his win to them. Next year without him, the junior scene will be even hotter. Liger wants the juniors to pop him from the announce table next year. He thanks Osaka for their support.

“People at the venue in Osaka, thank you very much for your support. Liger’s BOSJ is over today. With your support, I managed to finish this tournament with a victory. In the chaotic match, Taguchi and Kushida helped me today. They still have a yoyogi match left. For the next year, two years, I know they will continue to warm up this Jr’s tournament with more energetic and more exciting matches. I will be sitting in the commentary sheet and will be watching with shouting “suge-!! (meaning ‘Fantastic’ in Japanese, casual version of ‘sugoi’)” with you guys, so please continue your support. Thank you very much.” -Jushin Thunder Liger

Liger’s Best of the Super Juniors has ended and, with their support, ended with a win.

There are a LOT of shenanigans in this match and not much in the way of actual wrestling. It’s interesting that Taichi was chosen as Liger’s final BOSJ opponent, which to me at least shows a great deal of confidence in the Holy Emperor to help deliver a dramatically (if not technically) satisfying conclusion to Liger’s BOSJ adventures. It may also speak to the wear-and-tear that Liger would’ve been feeling after such a grueling tour, and one of the reasons he decided to take a back seat in future.

This was also Taichi’s final BOSJ appearance, as he is now tearing it up with the big boys in the G1 Climax with big wins over the likes of Tetsuya Naito and Hirooki Goto.

And so, with a little help from the friends he inspired and taught along the way, and shades of Kishin Liger who had lain dormant since 2012, Liger was able to end his BOSJ career with a win.