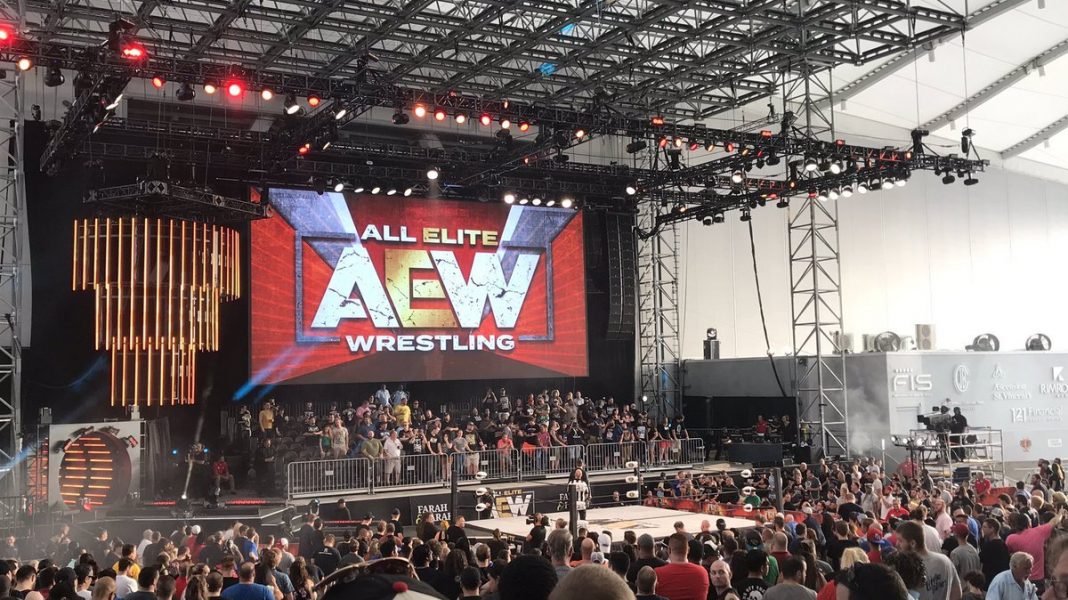 Aesthetically this show looks completely different from any other US wrestling company which is really cool – the more inventive pro wrestling’s look and presentation gets, the better. This was a considerably better showing for the Librarians act this month – partially because Avalon is considerably better than Bates but also because the act actually got the intended reaction. There is still zero depth to the act bar them going shush but Avalon worked really well here as a lower card foil – getting heat and setting up Sonny Kiss to look really good. This was designed as little else than a quick and easy showcase for Sonny and it worked a treat. **3/4

There were two important notes to take from this match – the work was sloppy and disjointed, Britt Baker going to the wrong corner to make a tag was a metaphor for the match at large. It seemed like four women entirely on different pages through the majority of the match. Bell to bell, this was the worst showing for AEW’s women’s division so far. The other major note was that in spite of that, the crowd were incredibly invested in it. Priestley and Baker did a big standoff and forearm exchange that brought the crowd to their feet and actually felt like a moment. Priestley got a huge reaction in general. Riho was also the stand out of the match, looking head and shoulders better than the rest. AEW’s women’s division has been a mess of four ways, triple threats and tags so far – it’s felt directionless. The crowd is clearly invested in the women though. Hopefully when the division settles into something more coherent and structured, where the individual women and their personalities can shine, things will come together smoother. **1/2

This group of wrestlers is going to become the most interesting thing to track across AEW’s history. Kenny Omega and The Young Bucks are proven, polished entities. These six along with the likes of Jungle Boy, Luchasaurus and Private Party are going to be considerably more intriguing to watch. Few are finished products. People like Darby Allin, Sammy Guevara and MJF are projects – hopefully watching them develop and grow into complete well-rounded television performers and move up the card should be a lot of fun. This match was a great showing for all involved, a hint of the promise AEW’s midcard has. Darby is already a star and this crowd is ready for him to have a significant role. Guevara also had a superb showing, a match like this where he can go nuts and show his athleticism is an ideal showcase. The different character dynamics played out really well too – obviously, MJF had issues with Spears but Darby and Sammy had some fun interactions while there was simmering tension between the likes of Havoc and Darby too. If this is what AEW’s midcard consistently looks like, it will be exciting to watch play out. All action and strong character work, this was a great opener. ***3/4

The tone of Brandi Rhodes’ big Road to Fight to the Fallen feature confused me. It could have played as a sincere bearing of the soul but equally there was a tinge of disingenuous self-indulgence in there – especially given Brandi has played a two-faced character not to be trusted so far. I was wondering could it be a variation on Mickie James’ duplicitous faux-babyface character from 2013 TNA. It turns out that was by design as Brandi brought Awesome Kong to the ring at the opening bell. The match was mostly pretty run of the mill. Allie got a visual win but Kong distracted the referee allowing Brandi to win. The highlight was Aja Kong saving Allie from a post-match and facing down with Awesome Kong. Even with 2019 Awesome Kong, that should be a fun match based on presence alone. **1/4

The Dark Order bombed twice before this match – garnering little to no reaction at Double or Nothing and Fyter Fest. They badly, desperately needed a strong showing here. Everybody knows they’re a damn great tag team but the Dark Order act seems like an anchor around their ankles. One team in this match had a breakout match but it wasn’t The Dark Order. Jungle Boy and especially Luchasaurus were absolutely tremendous here. People were already supportive of Jungle Boy going in but it was really Luchasaurus that tore down the house with his combination of power and speed. In the same way, Private Party played the starring role in the opening three-way tag at Double or Nothing, Luchasaurus and Jungle Boy are made men after this match. AEW’s tag division is extremely exciting – pretty much any combination of their teams will produce the goods. Evans and Angelico were mostly there to be thrown around by Luchasaurus and it was tonnes of fun. While The Dark Order have to continue to wait for their act to click (or for it to be retooled) this match was great. ***3/4

Look, we all knew Page was winning this match. I typed that Page def. Sabian headline before the match started. Sadly, the crowd knowing that too gave Sabian absolutely no credibility here. Nor did Sabian ever work with the fire or urgency to earn that credibility the hard way. I am and will always be a big proponent of undercard guys losing competitive matches to stars. The star generally loses nothing and the undercard guy is elevated by association. This, however, was completely the wrong match to do here. Page going 19 minutes with Sabian in front of a crowd who never bought Sabian as remotely on Page’s level only did Page a disservice. Page is half of the company’s first World Championship match but barely feels a level above MJF in terms of how he’s been presented. They finally turned things up a notch in the closing few minutes as Page got a little nutty, but this was the wrong match to work here in every regard. Jericho, disguised as a member of The Dark Order, attacked Page after the match – busting him open with The Judas Effect. Between pinning Omega with it and drawing blood from Page, Jericho’s spinning back elbow should be overcome All Out. A bad night for Page. **3/4

The Lucha Bros B-level tag team matches is the most consistent ***1/4 match you’ll ever get. This was no different. The Lucha Bros challenged The Young Bucks to a ladder match for All Out afterward. ***1/4

Seeing Omega translate his more slow-burning epics to a US audience will be an interesting thing to watch as his AEW career develops. US crowds generally prefer their instant gratification and Kenny opts to layer the majority of his matches as epics. You saw a little of that here as the match ambled toward CIMA’s big Meteora out of the crowd and then kicked up a gear. CIMA looked to outmatch Kenny’s V-Trigger spam with Meteora spam of his own but the last ten minutes of this were really tremendous. I bit hard on a CIMA cradle right at the end, especially impressive given there was little chance Kenny was losing this match. This was both CIMA and Kenny’s best AEW performance so far. ****

Jericho cut a promo on Page before they had a pull-apart brawl. They’ll have to work hard on the Road to All Out shows to get Page main event ready. Their three shows so far haven’t done a particularly great job of doing so.

There is a single cardinal sin for me in any tag team match, something that just takes the steam out of any tag match – two heat sequences. The Bucks got the heat on Dustin before a Cody hot tag. The Rhodes then got the heat on Matt before a Nick hot tag. That was a good fifteen minutes of this match and it was pretty dull. This match had neither the frenetic energy of the best Young Bucks matches nor the immaculate build and pacing of the best Rhodes Brothers matches. It was a long relatively aimless match that did little to engage the crowd and spread a good fifteen minute match way too thin over thirty. I am extremely wary of the long epic style in front of US crowds. US audiences are much less willing to go on a longer ride if the first half isn’t engaging. They lose interest. Two back to back matches of that style may have illustrated that here. I can’t fault the effort but on the whole, this was disappointing. ***

Shad Khan and all of AEW’s key babyfaces came out to present $150,000 to the Jacksonville Victim Assistance Advisory Council. Kenny Omega then rather amusingly worked around his usual finger gun, bang sign off (this was a show raising funds for victims of gun violence after all) saying boing instead. I endorse doing that from now on regardless of the show.