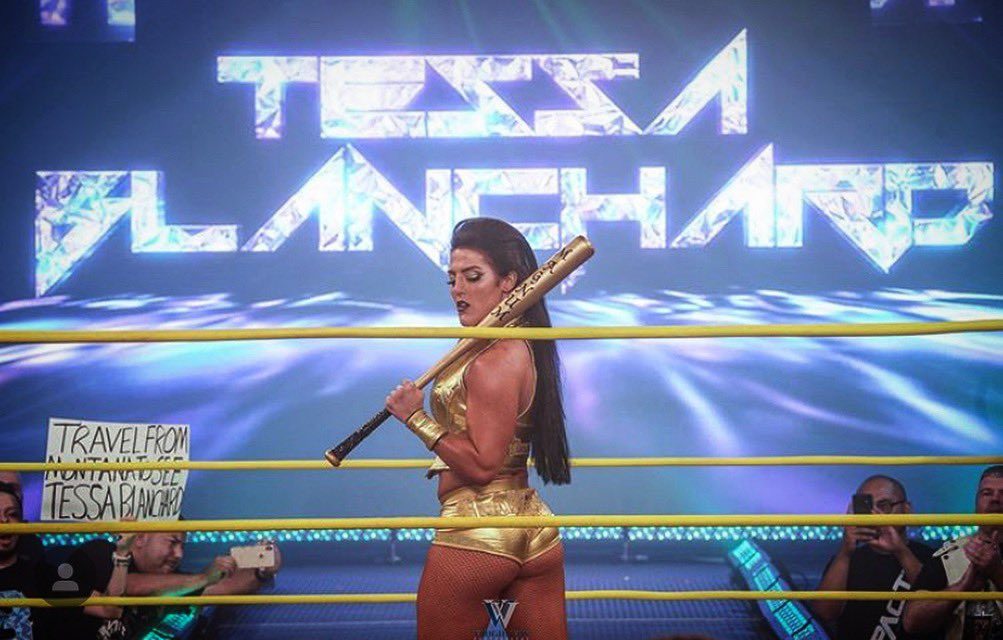 This four-way didn’t quite fit the brief of ‘TJP’s X-Division Open Challenge’ as advertised on the Slammiversary go-home show, but it was a fun opener nonetheless. It was an effective way to get all four guys on the card and they succeeded in not sticking too slavishly to the traditional multi-person formula, with everyone getting the opportunity to shine and there being enough entertaining spots to keep this interesting. Mack picked up the win after landing a six-star frog splash on Crist, potentially teasing him as the next top contender for the X-Division Championship. ***1/2

As a multi-team contest this was always going to have a lower ceiling than a regulation 2-on-2 tag, but the ‘injury’ angle they ran with Santana meant that this came in well under my pre-match expectations.

Like a lot of big LAX matches this started at a frantic paceand for the next five minutes the three teams worked at a tremendous clip, looking as though they were going to deliver something that wouldn’t have looked out of place in PWG. The North looked good in their first match as champions, with Josh Alexander particularly thriving in one of the few opportunities he’s had to stretch his legs in the company thus far. However, the injury angle was confusing, killing the flow of the match and sucking the life out of the crowd. The Rascalz looked poised for victory after landing the Hot Fire Flame, only for The North to steal the pin on Ortiz. Solid, but definitely below par. What remains to be seen is whether that’s the last we see of LAX in an Impact ring. ***

I don’t normally like First Blood matches but this worked for me, as Edwards and Kross had a fun brawl that played to both men’s strengths and delivered a solid pay-off to their feud. You can’t ask for much more really. This match told an effective story, with the more physical Kross dominating in the early going, only for Edwards to use his heart to work his way back into the match. The finish, which saw Edwards snap Kenny 2.0 and use it to cut Kross’ mouth wide open, was both innovative and a strong callback to the start of their feud. A strong thumbs up from me, but again I was left wondering whether this is the end for Kross in Impact. ***1/2

There was a niggling feeling in the back of my mind before this match started that Rob Van Dam might catch lightning in a bottle one more time, that Van Dam might actually be able to roll back the years and deliver something entertaining. That feeling of hope, however, dissipated within about 60 seconds of the bell ringing to start the match. Van Dam looked good in places, and I thought Moose did well, but this match felt interminably long and after about the 5-minute mark I was waiting for the finish to come. It eventually did, 8 minutes later, when Moose speared the former Impact World Champion for the win. This wasn’t good, and I sincerely hope it’s the last of Van Dam in Impact. **1/4

On paper this had the chance to either be an exciting, intriguing plunder brawl or a complete trainwreck. When the dust settled, it ended up surpassing all expectations and being a really good watch and probably the best match most of these women have had in the company. Although in the opening few minutes the match stuck closely to the 2 in, 2 out format that can often dog multi-person affairs, these four women eventually found a good rhythm. Taya looked particularly strong in this one, running wild with the staple gun and helping land a brilliant German Suplex/Superplex combo from the middle rope.

Taya connecting with a superb Side Effect to Rosemary off the apron and through a table in the closing stretch left Havok and Su Yung in the ring. The former looked set to become a two-time Knockouts champion after hitting an Avalanche Tombstone on Yung into the thumbtacks, only for Taya to get back in, throw a chair in Havok’s face and steal the pin to retain her title. Great work from all four women in one of the best women’s matches in recent company history and a result that presumably continues the Rosemary/Su/Havok feud and sets up Taya to resume her feud with Tessa Blanchard. ***3/4

Johnny Impact is hit or miss for a lot of people, and he certainly has his limitations, but he more than delivered here in an excellent X-Division title match. They used John E. Bravo to slow the match down in the opening exchanges, allowing Swann and Impact to empty the tank and go balls-to-the-wall in the next 10 minutes. Impact demonstrated more of his power offense in this one, in particular, the Johnny’s Edge, which allowed Swann to deliver once again in his role as the fiery babyface champion. Impact chucked the kitchen sink at Swann, including landing two consecutive Spanish Fly’s, only for the champion to kick out of everything and then secure another successful title defense with a bevy of vicious strikes and a top-rope Phoenix Splash. This defense continues the elevation of Swann and adds a lot to his title reign, furthering his case as Impact’s Wrestler of the Year thus far. It also looks to have been a pretty good send off for Johnny Impact too. ****

Whilst Impact was on course, at this point, to deliver six solid PPVs in a row, the main criticism of the promotion (aside from it being an ECW tribute act) was that it was lacking that big-time World title match on one of its major shows. In not putting this match on last, they allowed Cage and Elgin to go a little bit shorter (the match only clocked in at 14 minutes) and have exactly the sort of hoss battle they should be having. This might not have been a MOTY-calibre World title match, but it was pretty damn close and one of Impact’s best matches in 2019.

Given Cage’s injury and the lack of interactions between these two in the build, it made sense that the champion came out firing on all cylinders to start. Elgin looked like a dominant and cerebral challenger, whilst Cage looked like the resilient champion who was still somewhat hampered by his back injury. The strikes were fierce, the kicks were impactful and the powerbombs resonated. Cage fought for his title with everything he had, kicking out of the Elgin Bomb and Canadian Destroyer before connecting with an F5, only for Elgin to himself kick out.

The World Championship is ON THE LINE!

Cage went for the Drill Claw, only for his back to give out, allowing Elgin to capitalise with a vicious superkick and forearm to the back of Cage’s head. The champion seemed down and out and Elgin seemed poised to lift the title he said he’d come to the company to collect. The match peaked perfectly, with Elgin going for yet another powerbomb, only for Cage to somehow roll through and eke out the win.

This match was exactly what I wanted it to be and exactly what it should have been. Elgin looked like a star and easily on the champion’s level, whilst Cage’s title reign didn’t have the legs cut from underneath it before it had the chance to get going, setting the stage for a rematch later in the year. ****1/4

Post-match, Elgin laid out Cage and looked to do the same to Don Callis, only for a masked man (Rhyno) to Gore  spear Elgin. Whilst I hate the potential authority angle involving Callis and Elgin, it should set the scene for an Elgin/Rhyno match and then Cage/Elgin II at Bound for Glory.

The crowd, as expected, were red-hot for this match and whilst it wasn’t without issue, it was a satisfying finish to another strong PPV showing. Giving this the main event slot certainly made it feel that little bit more special and Blanchard seemed to work with the sense of occasion, starting the match like a house on fire and wiping out Callihan with a series of dives. Well, that was until Callihan caught her, thrust her into the railings, hit a death valley driver onto the floor and connected with a powerbomb to the apron.

.@Tess_Blanchard goes on the attack!

From there the story of the match was set; Callihan had a discernible power advantage but Blanchard was the more resilient and resourceful. Tessa tried to level the score with a cutter on the ramp and a step-up codebreaker in the corner, only for Callihan to always have that power discrepancy to wipe out her momentum. I could have done without the two ref bumps and the bat shots, but they kept the crowd engaged for the closing moments of the match. Blanchard got extremely close to a win after landing the Magnum and rolling through for the crossface in a callback to her match with Gail Kim at Rebellion, but Callihan again had an answer. The Gotch gave Sami a two count, with the Cactus special then sealing the deal.

This was a wise use of the intergender format, as it further elevated Blanchard but also was booked in a way to give Callihan a much-needed feud victory and win on PPV. ***1/2

Another Impact PPV and another firm thumbs up – these Impact shows are becoming one of the safest bets in wrestling right now. Slammiversary XVII might not have peaked quite as high as the show did last year, but it was probably more consistent top-to-bottom and the second best PPV of the Callis/D’Amore era. The final four matches all clocking in at ***1/2 and above is a hell of a final stretch, with Cage/Elgin probably the best singles match in the promotion this year and Rich Swann once again delivering in a big spot. Putting Blanchard/Callihan in the main event slot will annoy some, but it worked and capped off an excellent show. With Impact rumored to be getting a new TV slot in the coming months and Bound for Glory set in stone for October 20, the company once again seems to be in a good place.