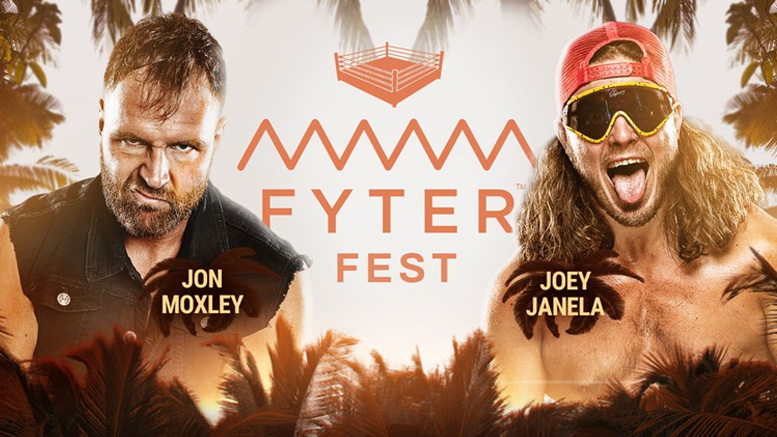 Early on they played up the inexperience of Private Party. But after Quen made a blind tag, Private Party got to show off some impressive flying spots and got massive heat from the crowd. The two veteran teams eventually took back control and Kassidy became the Ricky Morton of the match. They are wrestled this in a quasi-Southern tag style which is an interesting choice for a 3-way tag, but they managed to pull it off. Best Friends won with a Strong Zero on Kassidy.

An excellent choice for the opener. Private Party are going to become stars quickly. Kassidy was solid in his role as the face-in-peril, but Quen was really the breakout star here with some spectacular moves. Credit to SCU and Best Friends for also helping to cover up any inexperience on Private Party’s part. ***¾

Bates sushed Allie as a taunt in the match which elicited my first eyeroll of the evening. Allie went after Bates’ right index finger and the commentary teams plays it up as a big deal to do that to a librarian. Avalon interfered on Bates’ behalf in an attempt to win her heart. The best part of the match is when the crowd chanted “Hooked on Phonics” and “Reading Rainbow.”

Allie got the win with a Superkick after some silliness involving Avalon throwing a book into the ring. There was some decent sequences in the match but what dragged it down was all the librarian storyline stuff with Bates and Avalon. **½

Nakazawa cut a promo and called Jebailey a cripple. Nakazawa then managed to get Jebailey to reveal it was his left knee that was injured and Nakazawa attacked it to start the match. They did some very basic wrestling stuff then Nakazawa busted out the baby oil for a bunch of spots that involved slipperiness. They fought around an inflatable pool on the set and then the weapons came out. Nakazawa speared Jebailey off the apron through a table at ringside in the big spot of the match. Jebailey ducked a Venom’s Tentacles attempt and gave Nakazawa a German Suplex that dumped him right on his head which ruled, I can’t lie. Lego got dumped in the ring and there were kendo stick shots. The ending came when the ref got bumped but Jebailey put Nakazawa in a La Majistral for like a 6 count. Nakazawa reversed for his own cradle for the win. This was better than it had any right to be, I ended up being entertained by this. Better than any WWE hardcore match on Raw in 1999. ***

There was a lot of mat and chain wrestling to start. They then took turns working each other over and Daniel’s targeted CIMA’s back. CIMA sold the back for a bit but then it became a non-factor There were some “Let’s Go CIMA” chants which I didn’t expect and was a nice surprise. Match then built towards bigger and bigger moves from each wrestler leading to CIMA getting the win with a Schwein followed up by a Meteora. The ending of the match was not quite the back-and-forth I was expecting. Daniels got in a couple of big moves but CIMA controlled the closing stretch convincingly. I think what hardcore fans were expecting was different than the decision to give CIMA a convincing win leading to his match with Kenny Omega. ***¼

Rose attacked first. Though Riho and Sakazaki got him some moves against Rose by working together, but Rose fought back each time. There were chants for Sakazaki proving she really got over at Double or Nothing. Rose gets isolated after a Sakazaki dive outside the ring so we got some Riho vs. Sakazaki for a bit. Commentators doing a good job putting over how powerful Rose is. Rose hit a diving knee from the top turnbuckle on Riho who was draped across the top rope that looked devastating. Match built nicely and we got a ton of near falls including some cool attempts from Sakazaki and Riho to try to neutralize Rose. Riho got the win and a huge pop with a flash cradle on Rose after an attempt at a Beast Bomb. This is what the women’s three-way at Double or Nothing should have been. At first, I thought Rose should have just squashed the Joshi talent, but by the end of this, all three women got themselves over in a big way. Sakazaki in particular, I think, is going to be a big star. ***3/4

This was all action from the start. Page and Jungle Boy, in particular, have good chemistry. MJF did a lot of heel stuff like trying to steal pins and chickening out. The match built to an extended Page vs. MJF one-on-one sequence. Page won with a Deadeye on Havoc after tossing MJF out of the ring. A fun but formulaic four-way match. Jungle Boy’s high spots got a big response and you can tell he is going to be a star. Havoc also got good heat from the crowd. Given the ending of the match and the fact that Page and MJF yelled at each other after the match, I think these two are going to be in a long term feud. ***1/2

CODY VS. DARBY ALLIN WENT TO A TIME LIMIT DRAW

Allin came out with a body bag with Cody 1-1 painted on it, so you know they’re serious about match records in this company, at least for now. This started like so many Cody matches. There was some mat wrestling then Allin pulled out a big counter on a Cody hip toss attempt so we got some stalling from Cody outside the ring. From there it didn’t take long for Allon to take his first sick looking bump of the match after Cody aggressively threw him into the corner. From there, we got a lot of Cody working Allin over, in that plodding Cody style, though at least this time Allin bumped and sold like a maniac which made it less boring, but it was still kind of boring.

It didn’t take long to realize that given how this match was being worked that they would be going near or to the 20-minute time limit. The match picked up a million percent when Allin finally got on offense and went after Cody’s injured left hand. Allin was out to make a name for himself because he dived off the top rope on to the apron where Cody was draped but then moved leading Allin taking another gross bump. Cody hit a Cross Rhodes with like ten seconds left but rolled over for the cover too late so we got 20-minute time limit draw.

After the match Shawn Spears hit Cody with a chair which led to Cody bleeding out of the back of his head. He had to be helped to the back by Brandi and a bunch of other wrestlers. The match was okay, boring in spots, but I think it did the job of getting Allin over through his insane bumps. ***1/4

Nick is dressed as Ken, Matt as Ryu, and Kenny as Akuma from Street Fighter.

Laredo Kid got a lot of offense in early on in the match which was nice to see as this is the biggest platform he’s been on, outside of AAA. I don’t want to come across as too negative here, but you’ve seen this match before. You saw a truncated version of it in the main event of All In, and you saw it in the AAA Tag Title match at Double or Nothing. That doesn’t mean it still isn’t a great match. It most definitely is. But the style is beginning to wear itself out for me. I can’t help but wonder what they are going to do for weekly TV main events because offering this kind of stuff up all the time can’t last. Though I think you can get some more out of this style for a bit because there are going to be lots of new AEW fans seeing this kind of match for the first time over the next several months. There were, of course, goofy comedy spots in matches like this from Omega and the Bucks. In this match, you got a silly triple Hadouken counter spot from the Street Fighter cosplayers. I also thought the ending was anticlimactic. You got the Bucks and Lucha Bros. doing crazy spots to take them outside while Omega puts Laredo Kid away pretty easily with no drama. Anyway, on the plus side, Laredo Kid made a great impression here and hopefully he has a shot now of finally becoming a star in the U.S.

This match will be the most begrudging four stars I’ve probably ever given. Incredible spots and athleticism, but we’ve seen so much of this style before from these wrestlers. ****

Can’t believe they would try this silly non-sanctioned gimmick in 2019. It makes zero sense. The company’s insurance wouldn’t allow it if this was a shoot.

Moxley with the biggest pop of the night for his entrance. Would you be shocked to hear that in a match between these two, they brawl in the crowd very early? I’ve seen a lot of people say they want to see one more Moxley run in CZW. I don’t think that’s going to happen, but AEW to its credit, gave a lot of leeway to Moxley and Janela to do crazy stuff including a chair wrapped in barbed wire, a barbed wire board, and thumbtacks. Also, thank you to the fans who are chanting “AE-DUB” instead of “EC-DUB” during the weapons and table spots. Time to retire the latter chant. Also, you have to admire the fact the hottest person in wrestling right now was willing to take a Death Valley Driver into a barbed wire board. Moxley doesn’t really have to do that to maintain his heat, but bless him for still being that crazy even after almost a decade in WWE. I’m not even a deathmatch guy but I thought this was awesome. It helps in matches like these to have incredibly charismatic guys like Moxley and Janela that can keep the crowd’s attention while weapon and table spots are often awkwardly set up. When the thumbtacks came out I cringed. I cringed when Janela took one of several bumps into them.

.@JonMoxley spitting out thumbtacks because OF COURSE he would! #FyterFest

Moxley got the win with the Death Rider just as I was beginning to wonder just how much more could I look at those thumbtacks in Janela’s feet. Match of the night. ****¼

While this did not quite peak as high at times as Double or Nothing this was another great show from AEW. My biggest complaint is the comedy on the pre-show didn’t land with me, and I’m not against comedy in wrestling. But I do think the comedy in AEW thus far is only a bit better than what the WWE thinks is funny these days. AEW is still going to have to figure out just how much silliness they want to inject into their product. This is something they are probably going to keep experimenting with through All Out and into the early weeks of their show on TNT until they strike the right balance or come up with funnier stuff.

On the plus side, Omega and Moxley’s brawl after the main event was awesome and I can see that match if they kept the build this strong doing massive business. 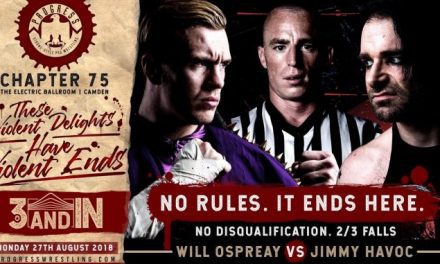 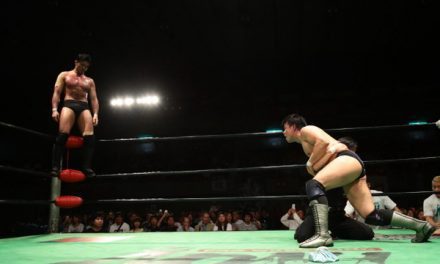 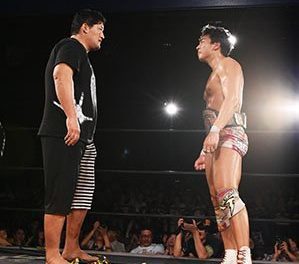