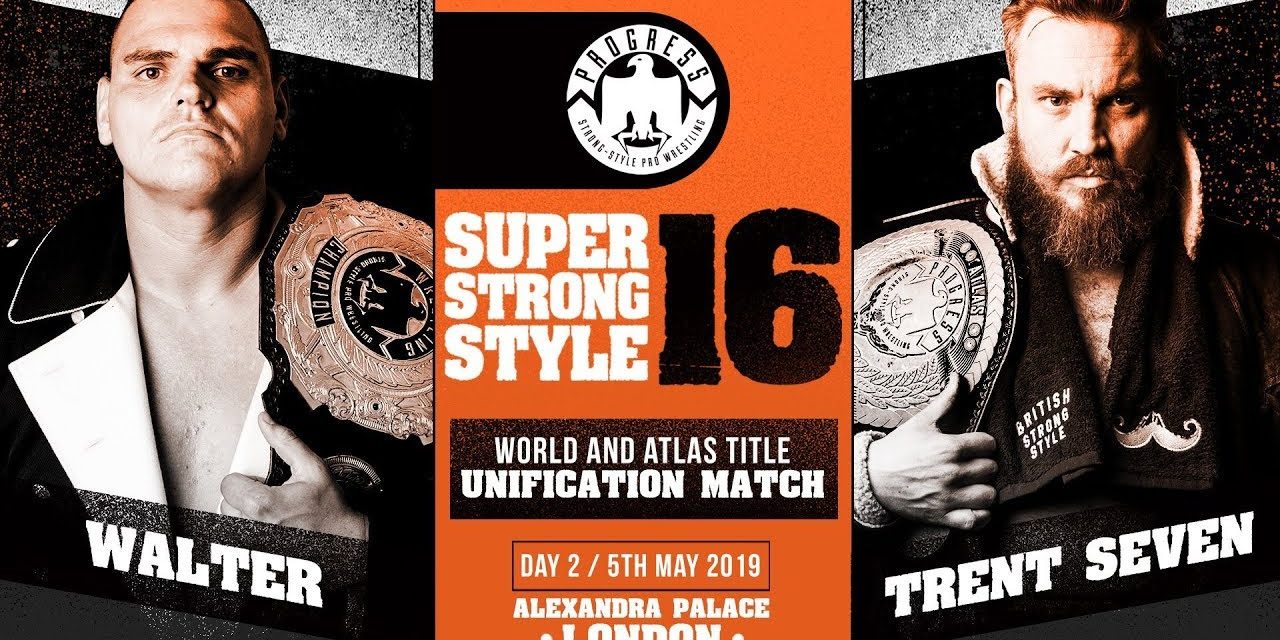 Day 2 of PROGRESS’ biggest weekend of the year features the quarter finals of the Super Strong Style 16 tournament and is headlined by a champion versus champion clash as Atlas Champion Trent Seven takes on PROGRESS World Champion WALTER.

A singles match between the two luchadores who were both defeated on day one in the first round of Super Strong Style kicked off day two with a bit of a letdown. While the match did feature a couple of spectacular manoeuvres, mostly by Aerostar, the majority of the match was contested at a leisurely pace. To further disrupt things Daga appeared to be in a constant battle with his pants. A sloppy leaping hurricanrana followed by a splash would give Aerostar the win. **1/2

This was the first match of the weekend to have the feeling of a big time match. Devlin was coming into the weekend as a firm favorite of the PROGRESS Ultras while Fletcher had the most momentum of any entrant coming off Aussie Open’s decisive victory over the Swords of Essex to regain the PROGRESS Tag Team Titles.

In somewhat of a rarity over the course of the three shows, the commentary team of Matt Richards and Fraiser Thomas really added to the match. They expertly put over that while things were quite even in ring that Devlin had much more experience and ultimately that would prove vital come the finish. The final two thirds of the match following an extended feeling out period were as thrilling as you would expect from a match between these two men. The momentum would switch from one to the other seamlessly, with both withstanding the others best shots as they pushed each other to their limits.

Just as it appeared that the Aussie Arrow was about to seal the biggest singles victory of his career with a series of superkicks, a savage headbutt from Devlin would KO both men with The Irish Ace landing atop Fletcher to get the three count. Tremendous match that in no way harmed Fletcher in defeat and proved further proof that Jordan Devlin is one of the best in the world. ****1/4

Trevor Lee did not do much actual wrestling across the weekend but he was without a doubt a highlight of the weekend. His promo before this match was fantastic. Between repeatedly mispronouncing Ilja’s name (Ill-ja), mentioning HHH and stating that as both are signed to NXT that they should respect each other and the rules only to throw his jacket in the referee’s face and low blow Dragunov for a nearfall. Ilja would quickly recover and a Torpedo Moscow would send Lee out of the tournament in rapid yet memorable fashion. ***

Martina would get the biggest win of her PROGRESS career over long time rival Jinny in a match that bell to bell I enjoyed. The Fashionista and the Session Moth as polar opposites are almost perfect opponents for each other and they always seem to deliver a satisfying match when they face off. The match was built entirely to allow Martina shine as she got to show off her strength catching Jinny’s attempted hurricanrana and moving into an elevated Boston crab and her agility with the double jump Seshbreaker. Unfortunately the finish was a rather tame roll up after Martina fought off Laura Di Matteo’s attempted interference.

Despite the in ring action being solid some factors surrounding the match were not. This was both women’s second attempt to qualify for the four way championship match the following day; why were two people who had lost recently being given an opportunity at the title? Following her defeat Jinny would raise Martin’s hand and share a hug with her rival before she got a babyface tearful farewell while Glen Joseph put her over as an all time great on commentary. Now I like Jinny but why is she getting a babyface send off when she has never been a face? And why is she even getting a send-off at all? Every PROGRESS show is packed with NXT-UK talent, why wouldn’t Jinny be allowed to work these shows? It all felt very needless and self indulgent. But hey at least the match was good I guess. ***1/4

The historic feud between the PROGRESS Originals (Mark Haskins, Jimmy Havoc, Mark Andrews, El Ligero (replacing an injured Eddie Dennis)) and Do Not Resuscitate is finally over. I say historic because that is how it was described on commentary by Glen Joseph in a fine example of when a commentator can lose any shred of credibility they may have had by using hyperbolic language. In truth Eddie Dennis in his five minutes on commentary did more to put over DNR than PROGRESS had in the previous five months.

This was every weapons filled multiman match you have ever seen. Nothing at all memorable about it other than Glen Joseph calling the PROGRESS Originals Dinosaurs multiple times and a Mark Andrews & Eddie Dennis hug that was not earned at all following their stop start feud of 2018. In a total anticlimax DNR were sent back to the ENDVR shows when Drew Parker fell victim to all of the dinosaurs’ finishers. *3/4

This match went a little over 15 minutes and felt twice as long. Robinson is a great heel, especially in PROGRESS, that brings a sense of danger that nobody in BritWres can compare to so of course he should be working over O’Reillys knee and trading submissions with the NXT star. The match had no flow as Kyle was working his cocky heel style in spite of being in the ring with a much more hated heel. Robbo instantly tapping out to the knee bar just like Ridgeway did the previous day really established just how lethal O’Reillys submission really is but that could easily have been accomplished in half the time **3/4

Jimmy Havoc would challenge Robinson to a deathmatch for Day 3 in what was billed as Havoc’s last PROGRESS match.

I have no complaints about either David Starr or Travis Banks; they worked this match at an incredible pace. They told a clear story of them being equals matching one another move for move and weathering the other’s finishers. However as this match took place in current day PROGRESS some idiotic booking took centre stage.

The match would end in a draw not once but twice. Now in a normal tournament when a draw occurs both competitors are eliminated and their potential next round opponent would receive a bye. This is PROGRESS though and Jim Smallman would restart the match after a double pin and then shout at them for brawling following a double count out. Jim’s big idea to end the brawl was to promise both men a place in the semi finals in a triple threat match with Ilja Dragunov if they stopped the brawl.

Sadly this was another example of PROGRESS over thinking things and attempting to be too clever. If they had just gotten out of the way and allowed Banks and Starr to deliver a quality match and a clean finish the show would have felt so different. As is it was another check in the fail column on what was turning into a rather depressing show. **1/4

Chris Ridgeway would pick up the win for his team via submitting Spencer with an anklelock. Oddly this match was lucha rules but I guess it would have made too much sense to put the actual luchadores in the lucha six man tag. As you would expect the action was nonstop with all getting their moment to shine. Brookes and Kid would play off their Schadenfreude alliance in FCP, Darby Allin got to do his insane coffin drop and DJZ leapt what appeared to be 70ft (see I can use hyperbole too) in the air to deliver a ZDT. Despite tapping out to Ridgeway, Spencer would impress me the most. He took ever opportunity to leave an impression and I really hope we get the opportunity to see more of him in Europe this year. ***1/4

This felt like a big time match. A unification battle between the World and Atlas Champions. The crowd were into it and fully behind Seven. WALTER and Seven both had their working boots on and spent the better part of 25 minutes just chopping and knocking the fuck out of each other. In the biggest singles match of his career Seven delivered a great babyface performance and was a worthy foe for WALTER. The problem once again was the booking…

At the end of this match WALTER would lock in his deadly Gojira Clutch and valiantly Seven would struggle and fight to get to the ropes. It was a great pro wrestling moment as Trent used all that was left in his body to get there to then only seemingly fall just short, a real heartbreaker. The referee would lift Seven’s arm twice as it looked like the man from Moustache Mountain was out. On the third raising of his arm Seven would finally reach the rope with his foot and yet his arm would gall and the referee would call for the bell and WALTER was crowned the Unified PROGRESS Champion.

The finish bothers me for a couple of reasons:

This is supposed to be a massive historic match in the company’s history, the unification of its only two singles championships and yet it ends in an inconclusive manner.

The finish also makes the referee appear thoroughly incompetent and incapable of doing his job.

Is Trent Seven so important that he had to be protected and couldn’t possibly just be beaten by the better man in WALTER?

Why after his intervention in the tournament match between Starr and Banks didn’t Jim Smallman feel the need to intervene to restart this match after it was clear that Seven had his foot on the rope?

A total letdown of an ending to what had been a fantastic battle between two big men who set out to deliver a worthy main event. ***1/2

In all, night two of Super Strong Style was an extremely disheartening show. The wrestlers did the best they could but ultimately when the booking is this bad it is hard to enjoy the show. At four hours long on VOD this was an absolute slog to get through and PROGRESS management really need to look at themselves if they think this was a show worthy of four hours of anybody’s time. Watch Fletcher versus Devlin and then close the show and skip to day three. 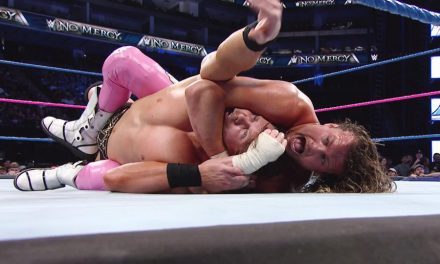