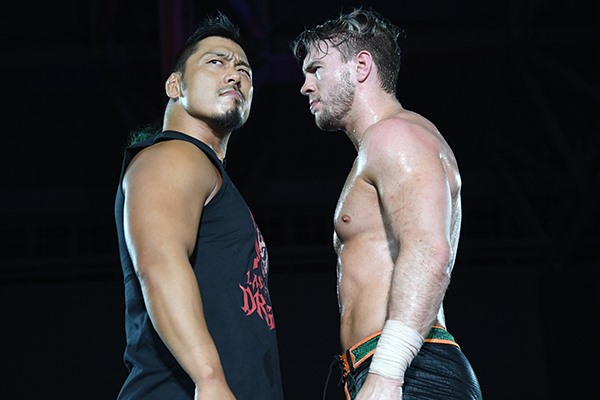 And here we are, the final night of Best of the Super Juniors block action. I’m still behind, but I wouldn’t let the opportunity pass me up to review barnstormers like Will Ospreay vs. Ryusuke Taguchi and…. El Phantasmo vs. DOUKI? Without any further ado, let’s get into the action.

I’ve never been the biggest BUSHI fan, but I thought he brought it here in this match versus the excellent young lion Ren Narita. Narita proved throughout his nine-match tournament run that he has what it takes, and that he is ready to go on excursion immediately. It’s incredible just how good Narita is so short into his career, how complete of a package he is. He has the natural ability to connect to crowds with believable selling and incredible facial expressions. As for BUSHI, well, he’s a good solid veteran hand, I suppose. The match itself was a fun, nine-minute affair in which, shocker, BUSHI won with the MX. Well worth watching if only for the incredible slap exchange this match had that made me pace around my room. ***¼

If BUSHI is a good solid veteran hand, then Rocky Romero is a great solid veteran hand. Many were ready to write off Rocky’s in-ring potential for this tournament, but he was able to prove that he still has a lot left in the tank and that he can produce incredible, gripping matches against the right opponents. I’ve enjoyed Bandido’s run from what I’ve watched, but I expected more than I perhaps should of about his prospects in the tournament. Despite what I think, however, it’s clear that Bandido has gotten himself over with the New Japan fans, as they were very clearly in his corner for this match. Like the opener, this was another hot little match that didn’t overstay its welcome. It had stiff kicks and some cool flips, capped off by a Bandido victory with the 21-plex. What more could you need? ***½

I’d have to think about it, but I think that YOH may be the most disappointing performer of the B block for me. Now don’t get me wrong, YOH is very capable of putting together good or even a great match once in a while, but every time I feel as if he is capable of so much more. I think that he is very clearly the lesser member of Roppongi 3K, and that if he doesn’t pick it up soon he could be stuck as a secondary junior of a unit ala BUSHI with Los Ingobernables de Japon. Eagles & YOH did some back and forth knee work in this, with Eagles easily surpassing his opponent in terms of believable, compelling selling. The only other remarkable event of this match was that there was a very close up shot of YOH’s nipple while he was flexing his pecs during his entrance. A very skippable match, and my personal least favorite of the show. ***¼

Time for the real business end of this card, El Phantasmo vs. Joe Lanza’s favorite wrestler Doh-you-KAI. I personally think both of these wrestlers are fine, and have had their fair share of good matches in the tournament. I’d be fine if I never saw DOUKI again, but he definitely improved as the tournament went on. There was an incredible spot early in the affair that entailed DOUKI doing a suicide dive in which he dove directly into a chair ELP was holding. Later in the match, the pair botched a complicated top-rope maneuver that added to the story, as DOUKI ended up taking a sick bump onto the floor. No matter what anyone may think about DOUKI, he’s different, and variety is appreciated in 20-man round robin tournaments such as the Best of the Super Juniors or the G1 Climax. If this is the end for DOUKI, then I say sayonara to you. You lit up the prestigious VoW Slack for days when you debuted, but you won me over as the tournament went on. Even if I still think you look like shit. Good little match here, worth a watch even if you hate either man. ***½

Now, this, this is why you wake up at 4:30 in the morning to watch this stuff live. Ryusuke Taguchi is a polarizing figure in the Twitter bubble – but no one can deny that when Taguchi is put in a big spot that he delivers. This match proved to be no exception, as Taguchi put on his working shoes and had a killer 22-minute main event in which he and opponent Will Ospreay looked like a million bucks.

The crowd was fully behind Taguchi here, leading Ospreay to work as a cocky prick – a role that fits Ospreay very well. Despite his attitude, Ospreay wasn’t working full heel, just enough to be a foil to Taguchi’s babyface heat. To put an example to that – early on in the match, Taguchi was going for his usual ass-based offense, but Ospreay was able to ground Taguchi and then taunt his opponent by swerving his hips around. It’s the little things like that that make Ospreay one of the best wrestlers around.

It was around the twenty-minute mark when the finishing stretch went into full gear, and it was an incredible four minutes of hot action. That’s not to say the first twenty minutes weren’t compelling – because they absolutely were – but the finishing stretch of this one was just out of this world. At one point, Taguchi reversed a Stormbreaker into an ankle lock and I popped up out of my chair in excitement, almost knocking over my soda and assuredly scaring my cat who was watching with me.

Eventually, Ospreay was able to overcome his elder opponent with the Stormbreaker. After the match, A block winner and opponent of Will Ospreay in the Best of the Super Juniors final in two days time Shingo Takagi came out to cut a promo. After Takagi spoke, Ospreay cut a fantastic promo about feeling alive when he is in the ring and how wrestling is one of the only things that makes him happy. It’s hard to do the promo justice by writing about it – it’s one that must be seen to be appreciated. A great promo to cap off a great main event that capped off an even greater nine-match run for Will Ospreay. God, I love wrestling. ****½

Other than the killer main event, this was a very average night for the B block. Despite only one match being above ***½ for me, I still enjoyed myself and didn’t feel compelled to play around on my phone for any of the matches I watched. Make sure you go out of your way to watch the main event and the promo that follows it – for they are both incredible and why I love wrestling. Start up the hype trains for Will Ospreay vs. Shingo Takagi, because in two days time at Ryogoku Kokugikan, they come into the station.